Tipping fruit trees will cause lateral branching which will later lead to more buds and fruit on the same sized tree. Noticed lots of leggy fruit trees around my area lately so I suspect not everyone knows about tipping. This is an example of tipping I did a year ago. You can see instead of 1 long branch I now have several branches. Those lateral branches that form fruit much faster than branches that grow straight. This apple tree I tipped for several other reasons besides just earlier fruiting 1.) keep it a manageable size 2.) Invigorate the tree 3.) Make the tree grow the direction I want it to 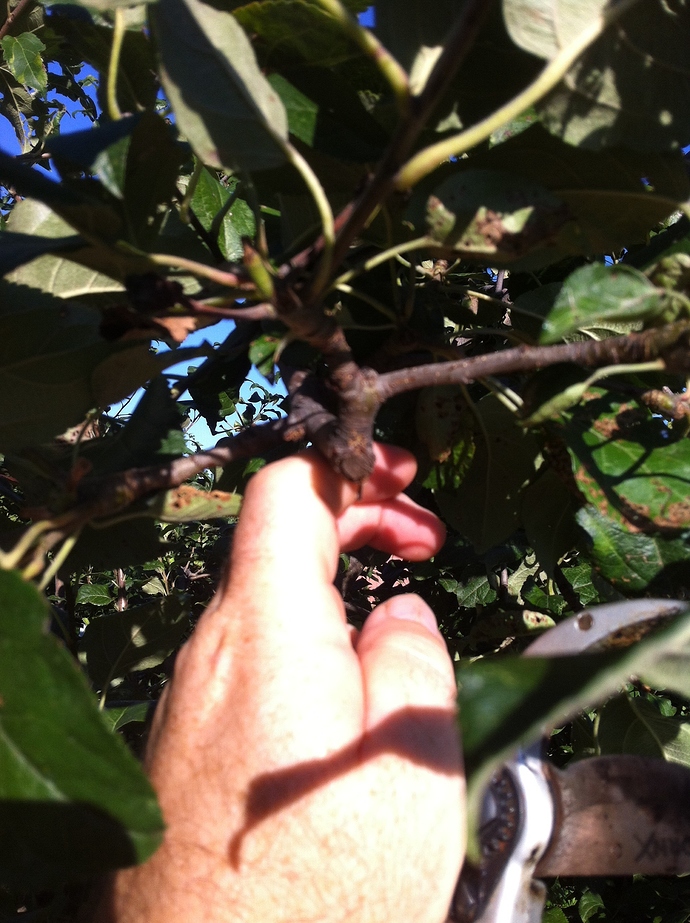 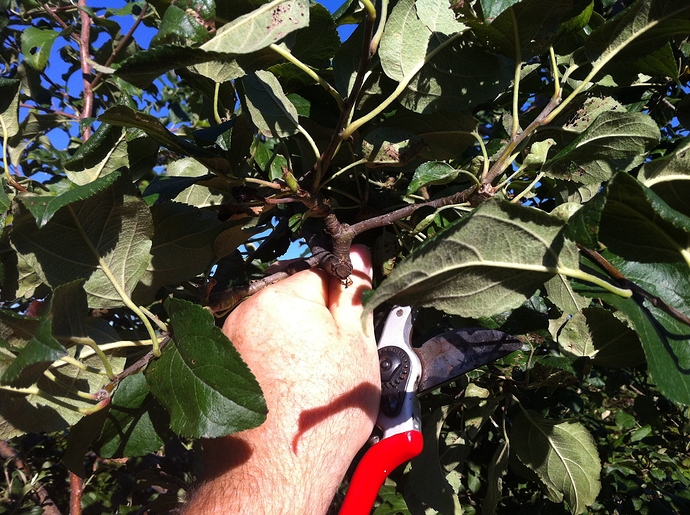 Will most apple trees eventually fill out on their own? That is, develop lateral branching on their own over the years?

They will spread out eventually when they are full grown. What most people do is prune 3/4 of the tree out later to fix it. If they tipped it when it was young they would have had fruit in half the time or less. My trees I top worked I cut completely down to the main trunk and had fruit in two years. Tipping is an important part of getting that spread early. Little branches are much easier to shape and prune than the big branches later.

@clarkinks- Do you tip during dormant period?

Yes that’s the preferred time but I don’t wait that long if I’m grafting. I prune the graft 2-3 times anyway so I’m shaping the fruit tree for the long term goal at the same time.

There can be down sides to the tipping though. Poor air flow which increases disease issues and too much shade which can cause poor fruit coloring. Too much shade can lead to poor fruit bud development as well.

the horizontal branches are more productive than vertical.
in my country to vertical branches are called suckers (not know if the same name in USA) these branches grow much and throw a small amount of fruit.

all this is produced by the sap of the tree, while I read the sap has “upward trend”, try to get first to the higher areas of the tree (perhaps to prevent or fight gravity), this makes these vertical branches optengan lot of sap and buds grow and produce much wood instead of producing flower buds with what we have very vigorous branches but with very little fruit

if we bend the branch (or this is bent by the weight of the fruit), this branch is no longer vertical, but horizontal then receives less sap and the tree develops more flower buds that will give us more fruit

Agreed everything in moderation. Tipping when done properly will generate horizontal growth which is exactly what you want. Tipping when done on a young plant can be used to develop an open center style tree to reduce disease. Point well stated on your part which is the tree should not be pruned to a point of simulating herbivore browsing or the tree will respond with additional vegetation.

We call those unproductive branches suckers as well. When people corrective prune their fruit trees in this area they inadvertently cause suckering. We know that leads to more pruning which leads to more suckering and you and I both know that circle never ends with fruit rather unproductive growth. There is always some suckering that occurs naturally. This concept is why I tip when the plant is young so that the lateral growth occurs early and the suckering later in minimal. I tip prune my trees later to keep them vigorous and productive but avoid needing to take off enough to cause suckering. I do like to keep my trees a little taller than many people do so that I get more fruit in less space.

Pray tell, exactly how are you tipping young trees? And how young is young? I’m planting 5 apple trees this fall. When would I tip them?

Typically they are tipped when you get them from the nursery but if not cut the top inch off so it spreads out.

Haven’t posted in a while but have logged on practically every day. Didn’t have anything to add so just turned into an information sponge.

I prune the graft 2-3 times anyway

Do you do it 2 or 3 times in the same growing year or in successive years.

I grafted some Limbertwigs early this spring and the growth exceeds three feet on some. I know I will have to prune for next season, but I might have been able to prune 3 times this year, at 15 inch intervals,to encourage branching out at each cut.

Did I forego an opportunity?

Mike,
We have bad wind at my house so I do prune to shorten the graft until the union heals and to cause the tree to send out lateral branches. Each time I tip the branch it’s taller so the result is a nice shaped strong tree.

This is an example of a Bench grafted eldorado pear I’m shaping this year. It’s been bit off by a deer once on the tip but that’s going to be fine. This tree is 2 - 3 feet tall and you can see the general shape I’m looking for already. This tree is not a year old yet but already has the shape so the next several years no drastic pruning to fix things will be needed. A close eye needs to be kept on this tree the next several years to make sure it maintains good framework. Pruning must be done on small trees or you wind up with big trees and big messes later. 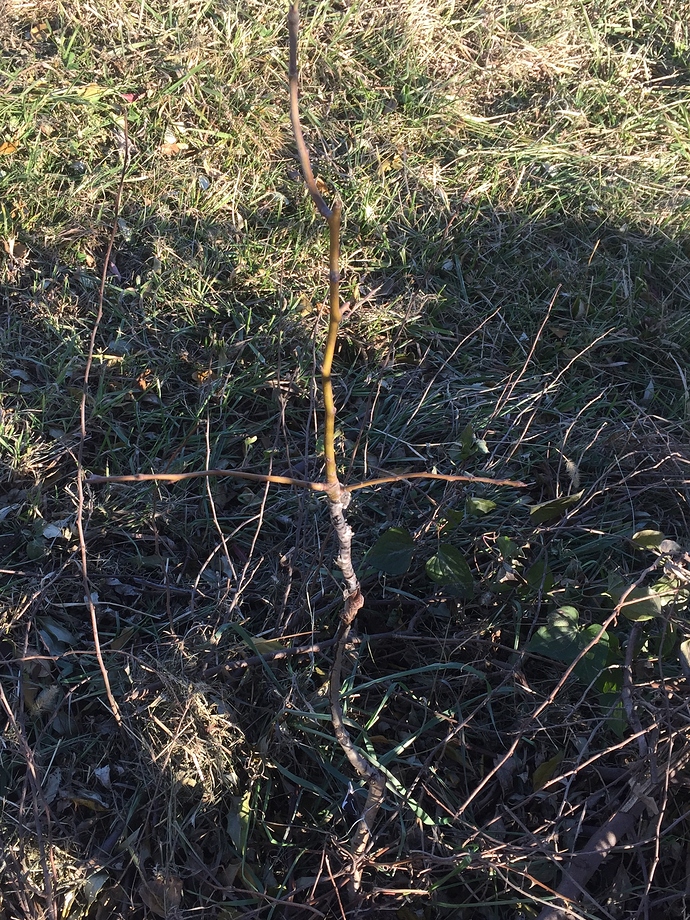 Already have Eldorado pears! Shape them from Day 1. The soil is terrible at that location.

Honeycrisp will need pruned to invigorate again this year. This is the first year its had apples in years. There has been yearly or every other year pruning but honeycrisp does what it wants. Typically I tell you most things like pears don’t need pruned but often times apples do need pruned.