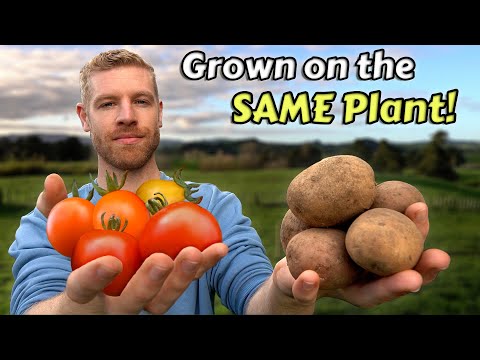 Very interesting video of tomatoes grafted onto potatoes. Looks like it may be fun to try. Not sure if it has an actual use.

I’ve heard about this plenty but I think the result is reduced production of both. It could be ideal for the backyard grower with the right care and cultivar combo. I’d guess we haven’t really optimized this. Fun project to try and it’s on my list of things to try. Tomato grafting isn’t too uncommon but to potatoes I’d say it is

it’s definitely fun.
in my experience you have to be patient and try several times until they grow together.

Or try the combo highlighted on the Simpsons: Tomacco (Tomato and Tobacco).

Maybe it would work with somatic fusion

Potatoes here are usually dying back and ready to be harvested almost before tomatoes are really getting started setting fruit. Just never seemed like would be a profitable endeavor from a tomato perspective.

I think the result is reduced production of both.

In the video his potatoes were smaller and the tomato plant stayed pretty short. Still he got a reasonable crop from both.

I assume there are to distant related. But there are some Solanum with nicotine

maybe it makes sense at some point. but there are other related fruits/vegetables that you could try grafting onto potatoes.

I’ve seen some videos of tomato on tomato grafting that looked interesting. Grafting a tasty, but not particularly vigorous or productive heirloom onto a crazy vigorous, disease resistant hybrid cultivar root system. Or if you’re in Zone 3 or 4 or something and want to grow beefsteak tomatoes and barely have the growing season even with indoor starts. But it’s probably ‘awesome, but impractical’ (assuming it worked really well) for a plant that’s just going to freeze to death in a couple months anyway.

I’d imagine for someone with very limited space, tomatoes on top of potatoes would be a good way to maximize production in the garden using above and below ground real estate at the same time.

They are not commonly grown, but plenty of long season potato varieties are around, mostly in gene banks. I personally would rather grow my potatoes and tomatoes separate. For historic interest, Luther Burbank at one time sold a pomato which was a tomato grafted on a potato plant. I have no idea how many he managed to market.

Also of interest, tomatoes grafted on jimsonweed are a very bad idea. Hallucinogenic alkaloids translocate over the graft union making the fruits deadly in some conditions. Some varieties of eggplant make amazing rootstocks.

There are a lot of fabricated video going on on social media.

The idea of growing tomatoes above ground and potatoes in the ground is a beautiful dream. I crazy enough tried it years ago. I may not have used the best rootstock. My result was that the tomato grew reasonable well, reduced production, didn’t taste big flavor difference. But the potato production almost zero and I had to pull the suckers off during the growing season.

From your knowledge basis, would a perennial relative of potatoes such as the Peruvian tubers + an indeterminate tomato produce a plant which would be viable as well as a potential perennial if over-wintered properly?

I am just throwing ideas out there, in my mind it seems like a fun trial project but there are so many others I’m trying to juggle I doubt it would happen.

There is a difference in seasonal adaptation with potatoes just as there are short, medium, and long season tomatoes. We grow potatoes that are either short or medium season. I’m not aware of any sellers that carry long season potato varieties. There are a ton of reasons why. The potatoes we grow are selected for long day climates meaning they will mature in temperate zones. Long season potato varieties that I know of are mostly tropical adapted.

So where is the problem? If we graft a short season tomato (Bloody Butcher would be an example) on a medium season potato (like Kennebec), we would probably have a viable combination. It would fall short because potatoes are adapted to growing in colder weather than tomatoes plus the photosynthetic capacity of Bloody Butcher is limited. In other words, a compatible combination would have to be transplanted in April or May when the potato rootstock would actually have preferred to be set out in March. Then the tomato scion would be sequestering all the photosynthate into fruit at the time the potato would normally expect to be maturing tubers. Short version, grafting tomatoes on potatoes will compromise total production for both plants.

I’ve seen this pop up several times over the years, including being offered by a few of the more popular nurseries that like to hype the new “awesome.” Maybe it was Gurney’s a few years back?

It could be a fun experiment, but everything I’ve heard from reading posts on different boards from people who tried it sounded very disappointing.

is it possible to graft a tomato or other solanum on a Tamarillo? the idea is obviously the Tamarillo is a very big solanum with big roots.

does anyone tried it?

I tried some Solanum to graft on Tamarillo, but only few, so I can‘t say if it is not possible.

I have a tree tomato plant, it is a large and strong plant, I am going to graft regular tomato, pepper, and eggplant to its branched this spring, just to see if any of these grow or not

The only plants I know for sure work with a wide range of solanums is eggplant as a rootstock. Pepper is an oddity, rarely accepting grafts except among the many pepper species.

Is there advantage of usingeggplant as rootstock?

The tree tomato I refer to is tamarillo (Solanum betaceum). Do you know if anyone tried to use it as rootstock?