Tracking Feijoa in the PNW

My Nikita is much later blooming than other varieties— not sure if it is a micro climate issue. I still have most blossom buds on Nikita still closed.

Fruits appear to be setting on several trees. My hand pollination appears to have worked. 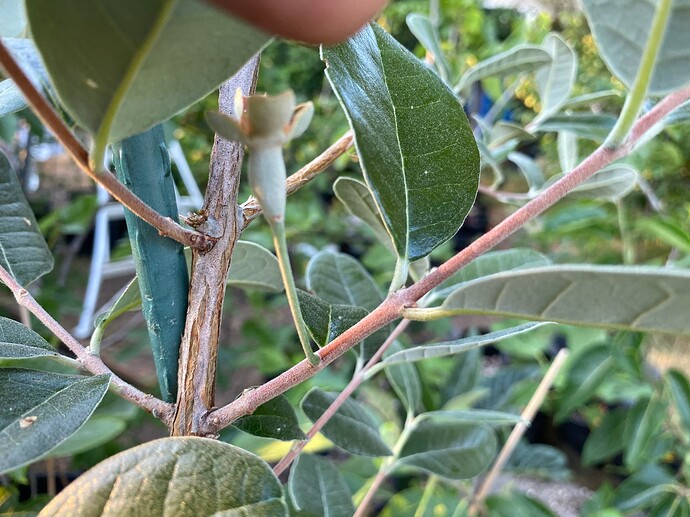 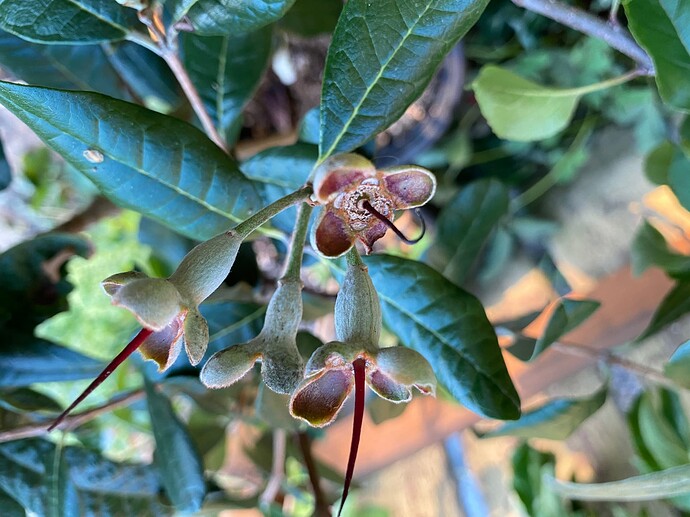 Over the years, I have seen very little feijoa fruit drop at the post-blossom stage. Many other types of fruit drop immediately at a small size if the fruit has not ‘set’.

For example, my quince tree rains down fruit from May to 4July, at pea to ping-pong size. Remaining fruits stay put and slowly size up through September.

Feijoa fruit can be considered to be ‘set’ when the fruit (between the calyx and the stem) has doubled or tripled in size. This can take some weeks, and can halt at any size. By 1 Sept viable fruits should be apparent. Runts can be pinched off at this time; they normally persist into winter.

Earlier this week, I snipped off all open, petal-intact blooms and all unopened buds, perhaps 200 by count. This was assuming they were too late to become viable fruit, plus like many fruits, average fruit size can be increased via thinning. There was no bird predation of the blossoms this year, unlike recent years when tiny birds wrested entire blossoms off the bush.

Interesting. I wonder if I should do the same to my Nikita. It still has blooms opening.

In the past, I’ve only gotten runts.

Wouldn’t hurt to try, considering you have an alternate source of sizable feijoa fruit.

I have been shaking the feijoa branches overhanging the deck daily to accelerate petal drop and keep the deck clean. Today about 30 fruitlets dropped off (a very small percentage), I attribute this to the extreme weather, currently 6 consecutive days of 95+, even with regular watering.

I’ve been watering very lazily this year. In the off season, I have visions of optimizing growth with fertilizer and water. In the Summer - I’m busy with work, its too hot outside, there’s lots of other things need doing.

So far its been 2 manual 2 hour timers and a couple of tripod sprinklers, plus some spot watering. Fortunately its dry enough that I don’t think its too much pressure to get the leaves and trunks wet when I water.

I haven’t set up any automatic irrigation this year. Hopefully I’ll get it together and at least get some timed water on the berries.

I am noticing that some varieties self thin and others tend to overbear. Nikita appears to overbear and I’m thinking they might runt out. Other varieties are swelling similar to those below. 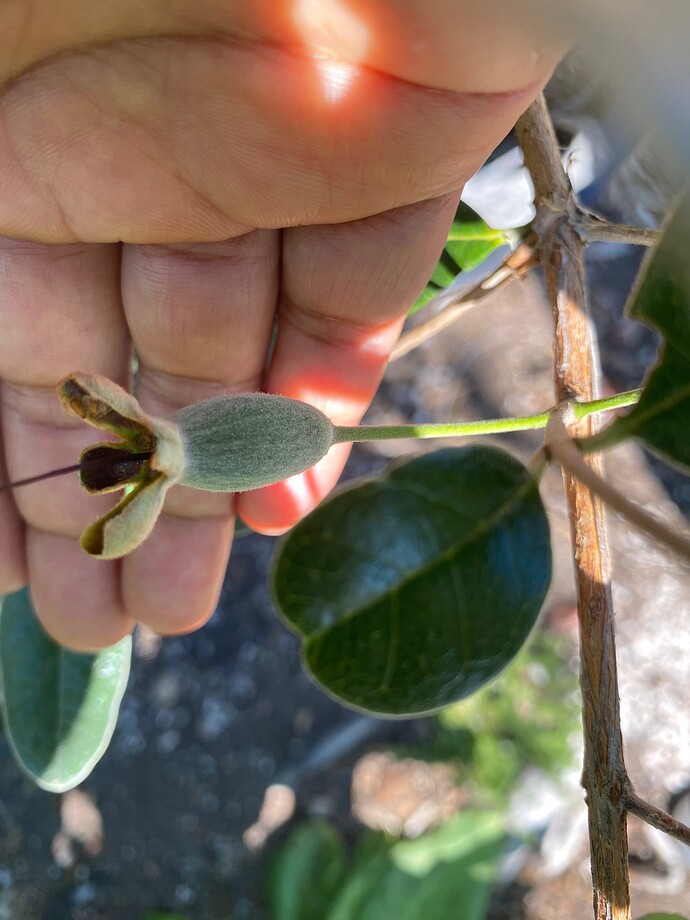 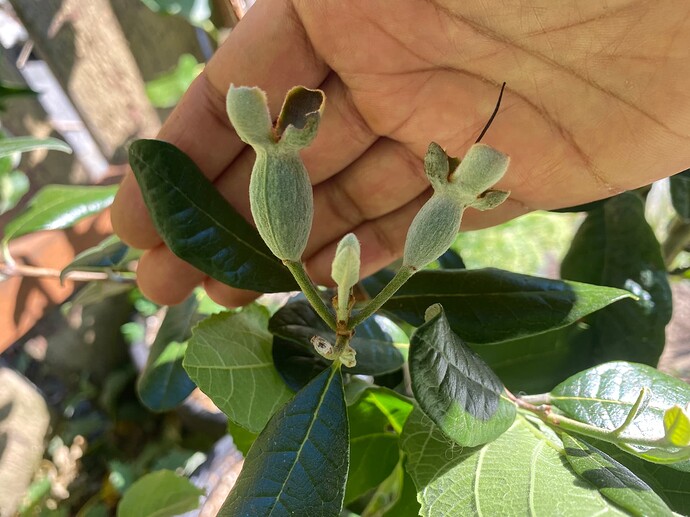 Yes, that is likely a keeper, has swollen to at least 5X. For the dual fruit, if the overall crop justifies thinning, the smaller can be removed.

Twins, triplets, and even quads are fairly common. The multiple fruits at those points often mature to the same size. My largest fruits have always been singles.

I have one branch tip this year that had eleven closely-spaced blossoms. 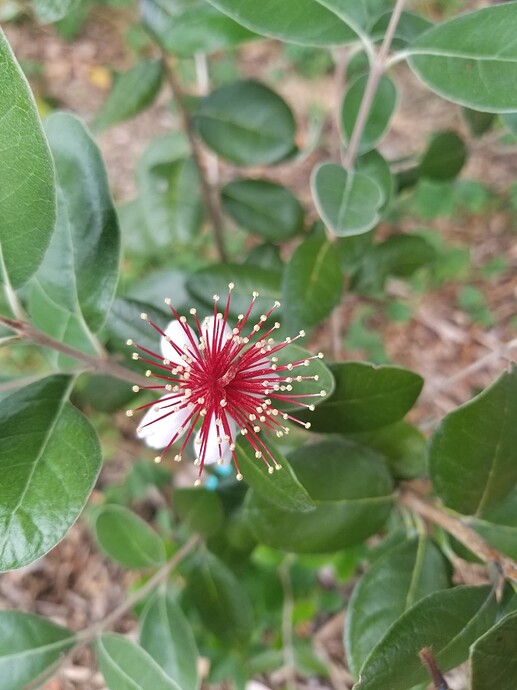 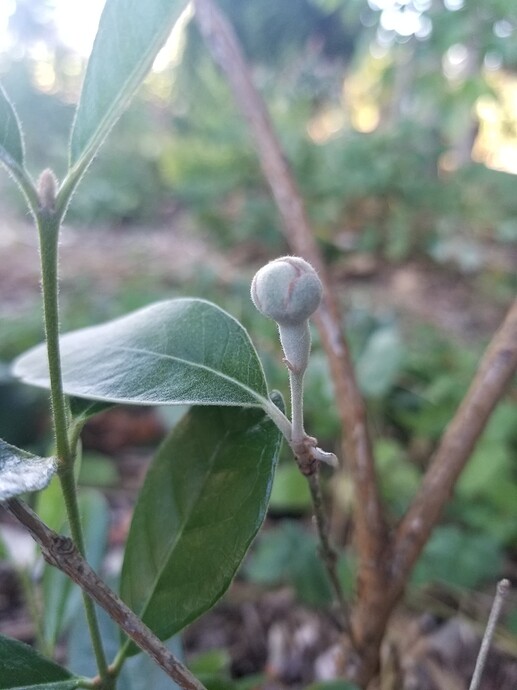 I’ve got some Feijoa action in South King County on my ‘Mammoth’ and ‘Nikita’. I’ve also got ‘Coolidge’ but have nothing to say about. It just sits there and doesnt really do anything.

Ethan, very beautiful. Unfortunately it will not ripen this year likely.
I have since learned that mammoth is a late variety for us and won’t make it most years.
Nikita seems rather late maturing too in my yard. But that might be micro climate related.

For Puget sound and maybe all of the PNW, best to focus on early or early/mid varieties for maximum sweetness.

I wasnt aware of Mammoth being a late variety but that is nice to know moving forward. Kind of a bummer considering it’s doing better than the other 2 varieties. Thank you for the info! I just grabbed whatever varieties I could get my hands on at the time.

I’m looking forward to hearing your reports on the fruits that ripen for you.

I have 2 Mammoth and a Nikita

Eventually I’ll get Larry’s one way or another.

[I was over at the fig forum where every where else in the country they have main crop figs ripening.
Out here breba figs are just getting ripe!

All this is to say that we are extremely heat challenged in the PNW. Sure we get 1-2 ish weeks of 90+ days but our warm weather starts very late.

I have heard that mammoth will ripen here in December but won’t be sweet. Don’t have much info on Nikita.

I am trialing some very early New Zealand varieties. they bloom earlier and swell fast. Hopefully they will ripen by early-mid November. Any later and they won’t be sweet I’m afraid.

My Negronne and Desert King aren’t ripe yet. Same tree at my mom’s house 15 miles away is putting out breba’s. I’m in a forest clearing surrounded by 100 ft. fir trees, she in suburban residential neighborhood surrounded by pavement.

This year is at least 2 or 3 weeks behind 2019 for some fruits, so I won’t draw firm conclusions about ripening based on one or two years.

In a hot year (last year) my Desert King brebas were ripe around August 20. In a cool year (this year) they probably will ripen around Sept 15. I, too, am in a forest clearing - surrounded by cedars…but on the northern end of our zone.
My 40 year old DK has produced for the last 34 years and the figs always make it - with still some warm days left. I have started some other varieties. Other than the challenge of growing them, I’m not sure their figs could be any tastier!
Anyone in the cooler areas of the PNW have a rival in taste to a DK?

Wow, what a difference! DK was never later than around July 25 here until this year. I am looking back about 20 years when the tree was planted.

I usually recommend Granthams Royal as a great breba producer with even larger fruit and sweeter taste but it is quite winter tender based on other peoples experiences.

There has been a feijoa ‘Mammoth’ bush several blocks away (SE Portland) for at least 10 years and that grower gets 2-ounce on average, ripe fruits after Thanksgiving. In better settings, ‘Mammoth’ can be 6- or 8 ounces.

Classifying the ripening time per variety can be difficult, some sources state early-mid-late season for some varieties but give a month range for others. CRFG (California) webpage states ‘Mammoth’ is mid-season, but the season there is several weeks earlier than PNW.

I wonder how sweet this grower’s fruits get. I have heard Mammoth don’t sweeten up in our climate unless you do hacks like grow against a southern wall etc.
As far as ripening season goes, I found timings on a New Zealand site. Mammoth seemed among the late ones.
In San Jose CA, feijoa blooms in April/May and their season goes on till Mid December. Their heat units are at a different level from the PNW. Even random seedling trees there have fruit to die for.

I have Desert King and Negronne, or Violet de Bordeaux. The Negronne is way better. Better texture, better flavor, more jammy and berry flavor. I also have what is probably Brunswick, and perhaps Lattarola, which I’d thought was Lattarula until it fruited.

My black/violet fig is much better than those others when it ripens in the heat. All brebas.

I’ve planted a few early main crop figs that are still young too.