How do I check to see if an apple is trademarked? I know i can not sell pink lady trees without authorization. I am unclear on other verities thats patents have recently expired like honeycrisp, enterprise and goldrush are trademarked.

oops misread your note… look for the circle-R after the name. I know Enterprise, GoldRush and Honeycrisp are trademarked but don’t know about the others. Rubinette and Crimson Gala (as well as many other Gala/Fuji sports) are also trademarked.

Thanks. Where are you able to see if they are trademarked? Should I assume that any popular moderen veriety is trademaked?

Scott, I bought a scion from Nick Botner that I think is Rubinette. Does the fact that it is trademarked mean I cannot legally trade it? Or is it that I cannot sell it with the Rubinette name attached?

I don’t have any commercial designs here, just curious, but also wondering if Botner should have sold it, or if, perhaps, it’s not really Rubinette.

A trademark just means you cant use the trademarked name without permission of the holder of that trademark. It is not a plant patent.

Pink lady is a trademarked name for Cripps Pink apple. Cripps pink is off patent. You can propagate it all you want. But you cant legally call it Pink Lady without permission.

From this it seems like Enterprise and Goldrush are NOT patented:

I am no expert but it seems to depend a lot on companies vigor in defending trademarks. I am sure there are tons of “Honeycrisp” sold today that U of M did not authorize or receive royalties on in any way. Pink Lady on the other hand seems to be defending the trademark, you may get in legal trouble for selling cripps pink under that name. If you are not selling them then they don’t care what you call them. I also expect Purdue/PRI will not be defending their trademarks but you never know.

@39thparallel, I am just going by seeing the circle-R or TM after the name somewhere. For example http://www.cumminsnursery.com/disease.htm Maybe it was bogus. BTW I assume you mean trademarked, not patented.

This issue is very confusing. I doubt public universities will to much to enforce their trademark rights unless its a sports logo. 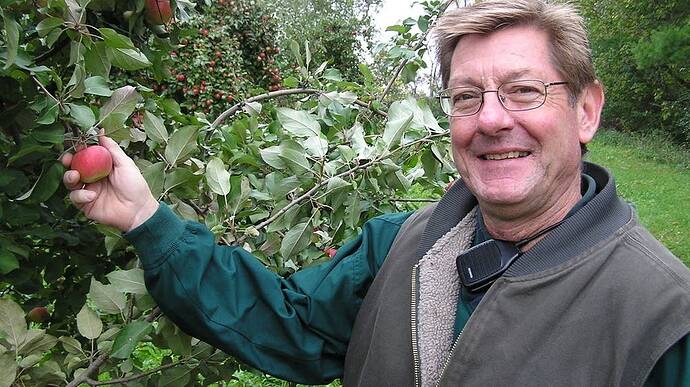 Honeycrisp apple losing its patent protection, but not its appeal

One of Minnesota's icons, the Honeycrisp apple enters a new era next year when its patent expires.

"What about the name, Honeycrisp? Is it protected? University of Minnesota officials say they aren’t sure. The name is trademarked by the U of M. One view is that means growers tinkering with variations will have to pay a trademark license fee or find another name.

Another view is the name is not protected and can be used by anyone, an opinion which may fuel a future legal spat."

I don’t think Cummins site has been updated for a long time. It looks like the websites I made in the 90’s

Cummins website is often confusing, they always seem to have old parts and new info intermixed.

I have been told on trademarks just to change the spelling slightly and have seen that actually done on various websites, to avoid the trademark infringement. Not only that but trademarks only cover the written word. If somebody says what apple is that and I say “Honey Crisp”, that isnt trademark infringement because of the 1st amendment. Personally I think it is pretty worthless to trademark a fruit variety. Generally by the time the patent runs out there isnt enough demand for the variety (replaced by the new “in” variety) to worry about protecting its name. I can see the value of trademarks to large, long lived companies such as Coke or Chevy but not products with relatively short life spans.

I spoke to the technology marketing agent at U of M, and one of their big regrets is that Honeycrisp is both the cultivar name and the marketing name - big mistake. Anybody can freely use the cultivar name, and since the marketing name is the same, they couldn’t trademark it. I’m sure they could come up with some spiffy marketing names at this point for places where the patent is still in effect (China, etc.), but Honeycrisp is so well-known at this point that it would be a futile effort. Live and learn.

I have read that Honeycrisp is often marketed overseas as Honeycrunch. I don’t know if that is due to some legal issue or if they just thought it sounded better. I believe it’s also marketed in Europe under yet another name which I cannot recall right now.

Money drives the quest to develop new apples which I’m glad of. After 20 years costs have been recouped and the patent expired. Its my opinion the apple should be free for all at that point. Trademarking is a way business beats the patent laws. Honestly for those reasons they are holding back the variety with the trademark. The laws should be clear on trademarked / patented varieties.

It might be an attempt to trademark the brand. There’s a risk with this, Honeycrisp is so well known that people might say “I don’t want this inferior Honeycrunch, I want to buy Honeycrisp instead!”

U of M made about $8 million off Honeycrisp, not such a great return for 30 years of work in my opinion. Even if the variety is trademarked, all it takes is for one picker to sneak out a stick of scionwood in his sock after the variety patent is expired and it becomes a public variety. I see Cripp’s Pink apples all the time in the market, a lot of them look better and were selling better than the Pink Lady apples sitting next to them.

Applenut,
I spent 5-10 years developing several new varities of apples and all I asked is that people grow them and enjoy them. I just strategically planted a bunch of seeds. From my perspective not everything is about the money. Sometimes we just do things to make the world a better place. The difference is of course perspective. I love growing plants and some people love growing rich. If I was rich I would just blow the money on more plants.

I should also say 8 million does not go far when your buying land and paying staff who runs expensive equipment which needs stored in expensive buildings. Honeycrisp was definitely a bargain to the world at 8 million. It is delicious!

Trademarked or not is irrelevant once the patent expires in terms of propagation. I just cant sell trees labeled as “Honey Crisp”, but I could sell truckloads labeled “Honee Crisp”. Trademarks protect a name not a product as far as I know. Once a tree variety is being sold to the general public through tons of distributors there is no way you are going to enforce trademarks to any great extent. You can buy Honey Crisp trees from just about any commercial nursery now.

It might be an attempt to trademark the brand. There’s a risk with this, Honeycrisp is so well known that people might say “I don’t want this inferior Honeycrunch, I want to buy Honeycrisp instead!”

I woulld pay extra for Honeycrunch, or whatever you want to call it if someone took control of Honeycrisp growers and sellers and held them to some kind of standard that would prevent the current situation of green apples of 11 brix being sold at a premium. I don’t buy Honeycrisp anymore because fewer than 1 in 10 that I’ve had in the last several years is worth eating.

For this reason, I no longer resent trademarked club apples like Opal, where even the poorer ones aren’t bad.