First year fruiting Trailman here on a 5th leaf tree- impressive pecosity for an apple on antonovka. Hope it continues to be productive in future years. The taste is really good for such an early apple, high in sugar with that acidic kick. I think it would be a good addition for an early cider blend, out of hand eating as well as the trdition uses for culinary crabs. Tree grows vigorously with spreading, drooping habit. Foliage and fruit seems decently disease resistant. I would plant a few more of this variety!
I also have Dolgo, Chestnut, Hewes Virginia crabapple trees bearing their first crops, still waiting on Wickson to begin producing fruit.

I have Kerr fruiting for the first time now. Its super overloaded, I hope the tree doesn’t break a limb! It also is very drooping and all the apples look great in spite of minimal spraying.

I’m not sure what to do with them, they taste good but it seems like they will be better in the kitchen. I might try drying them. Making jelly doesn’t interest me, you throw away too much of the fruit.

I already collected and squeezed my Geneva for cider. I, too have Wickson and Virginia crabs, about 3rd leaf, so I have a few apples to taste but not enough to do anything with. I have a really productive Whitney that I use as cider addition. Nice little strongly flavored drops. I usually have to save some of those for my wife to use in jelly. Other uses…I wonder if they could be run through a food mill to remove the seeds, stems and skins, and then used for apple sauce or something?

I have made some great apple butter using Hewes VC, cook em whole in crock or oven, then mill out seeds and peel. No seasoning necessary! 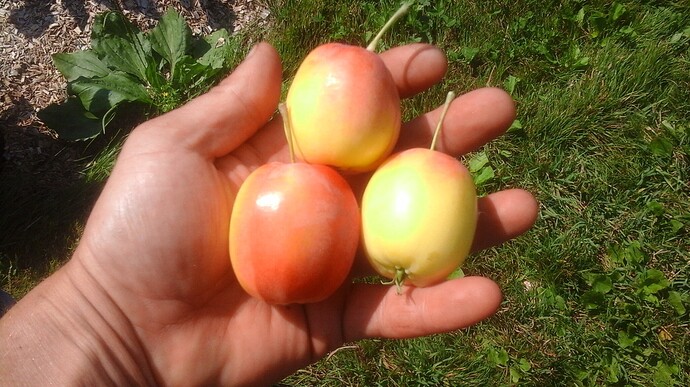 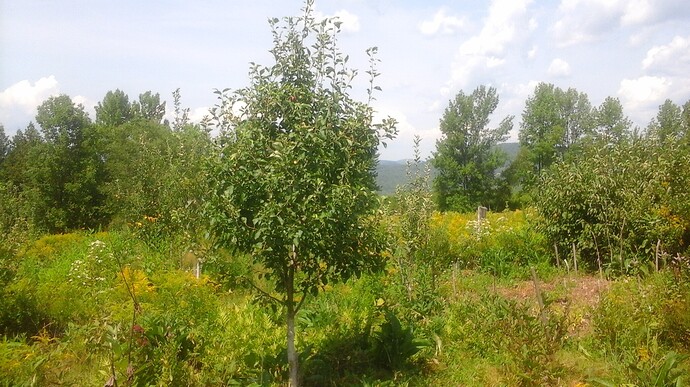 Great looking apples JesseS! How many apple varieties are you growing?

I grow somewhere around 50 varieties of apple, I expect to graft some of them over to varieties that prove themselves in my location, like Trailman.

Trailman has a nice bloom this year as it catches the morning sunlight.
Yesterday my son and I tried to count the varieties of pollinators working in the canopy, there were many kinds of bees, wasps, and flies, even some that looked like blue orchard mason bees. Smelled wonderful to stand next to! 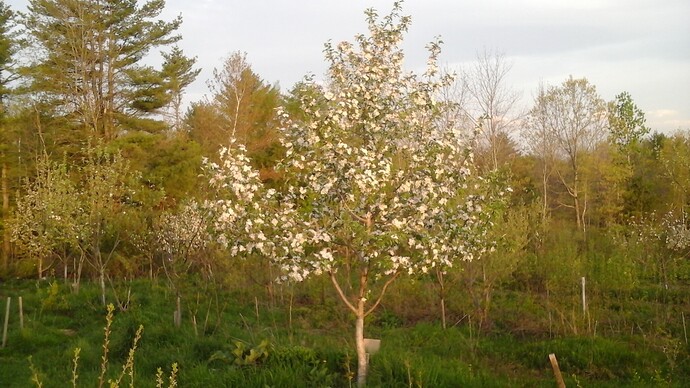 Another harvest season of my Trailman crabapple… seems annually to be productive. Stands out from other summer apples with a good amount of sweetness backed up an acid kick. I eat them in two bites, core and all!
13 brix. 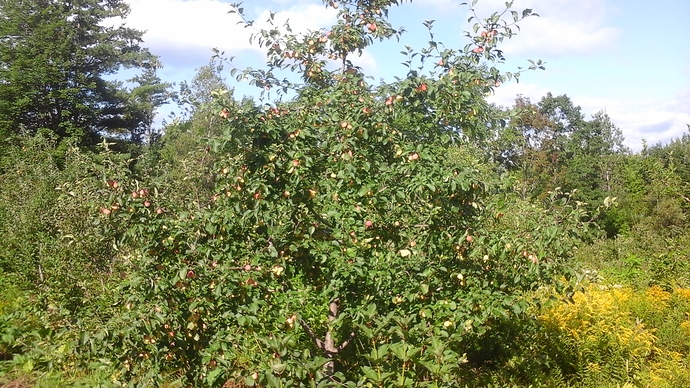 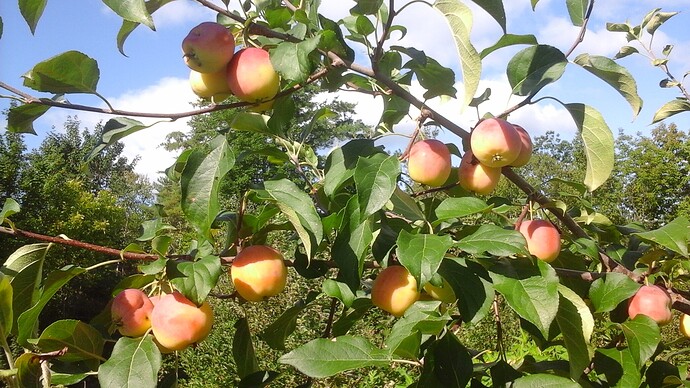 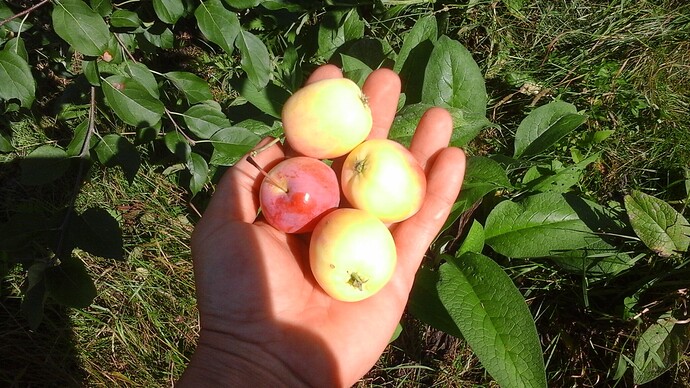 Cant wait for mine to fruit. The scion you sent me from your tree did well. I have one tree out of the bunch that I grafted to a B118 root stock that was planted in the spring of 16’. That tree is probably already 5’ tall. Wouldnt be surprised if it bloomed next spring, B118 is pretty precocious especially on crabapples.

Just eating our Trailman crabs now, I agree a lovely balance of sweet with a nice kick of sour at the end. I find the picking window for these is fairly long compared to some of the apples I can grow.

Wow, really? Everything I have read said Dolgo was one of the earliest! And Hewes one of the latest. Strange.

I am trying to put these in the correct order, this is what I have so far based on what I have read online. Could someone please advise?

There is likely more than one ‘Hewes’ in circulation…Dolgo ripens along with Chestnut, so midseason here. Wickson is my latest crab

I’m in Virginia 7A, but for me, Callaway was after Centennial. Wickson was my only other one to fruit this year and was definitely much later and I still picked it too early. I also have Dolgo, Chestnut, Kerr, Olga and Almata, but they haven’t fruited yet to know where they’ll fall in the order.

How do the crabapples hold up to insect damage if not sprayed against insects? Particularly Dolgo and chestnut. Thanks!!

Dolgo seems more bug resistant than Chestnut, both have done well for me with out spraying…Chestnut is a much better all around apple, it is a favorite.

Hey,
Don’t know how active this thread is but I have some questions about Trailman and possibly some other crab apple varieties and I’m hoping you can help out. Thank you!
/Andreas

this year I was lucky enough to get 3 chestnut, my first apples (although I have 1 English Golden Russet coming along nicely)……to my limited apple palate, and realizing we had a crappy year of cold and wet, plus these came from a 5’ tree:

they were very good. Very sweet. A bit tart as well, but at least for these the defniing feature to me was sweet, they were sweet enough (and dense enough) to remind me of Golden Russet more than anything else, in their almost gritty, sticky sweetness.

I like the apples a lot (again, at least given my very questionable sampling) and since I intended at least some trees of mine do double-duty as wildlife trees, I am really pleased with this one. they were extremely good.

Thanks for the scions, Jesse!