I live in Northewestern Illinois zone 5 and want to start growing hardy kiwi. Is anyone using the espalier method of trellising?
What is the optimum height and width to grow the hardy’s without stressing the plant but getting the maximum fruit production? I would love any feed back or advice.

Hardy kiwi will get as big as you allow, so optimum size depends on how much you are willing to spend, and how much space and time you have, and how much fruit you want. Mature vines can carry hundreds of pounds of fruit, so the strongest and most manageable option is probably some sort of pergola. Something less robust can be used, but you will need to prune frequently to keep things under control, and production may be low if you don’t prune correctly.

The shade from a pergola will also keep the weeds from growing, and fruit can be easily accessed from underneath.

Thanks for your advice!

Ok I need to know just how big and wide the hardy kiwi can get and not hurt the integrity and health of the plant. I’ve read where if they get too big the plant suffers and won’t produce. Does anyone know someone who’s an expert on hardy kiwi or books I can get that tell me everything I need to know about these plants?

Here’s a pic I made years ago when I did my 2nd hardy kiwi planting. My first planting was too close (10’ spacing) and I was never able to keep up with them. I also only had access from certain directions and had other plants in the area that they kept climbing on and smothering. 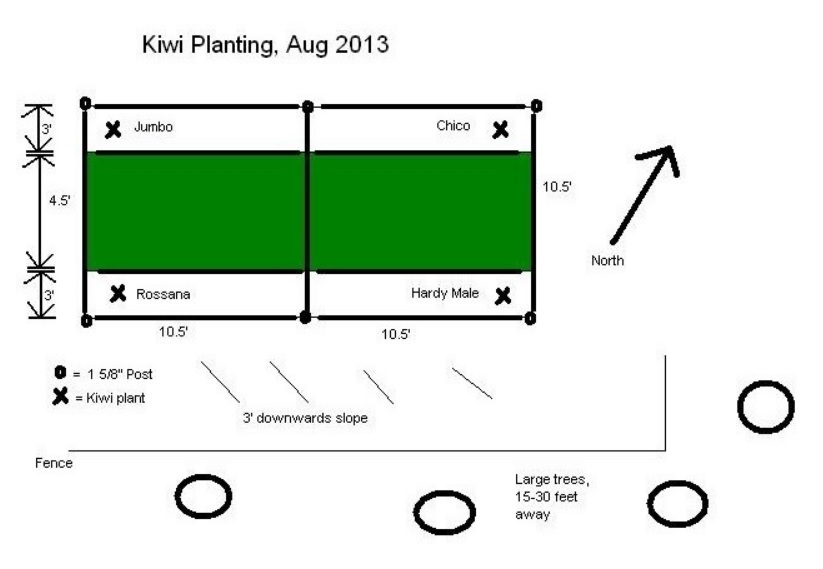 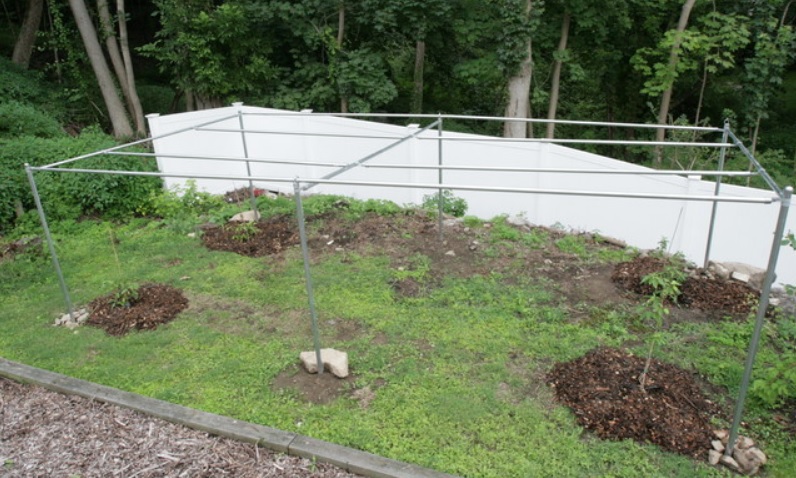 So, give it a TON of space. Space which is clear on all sides from obstructions. The one I have above is much better than my first planting, but the male did get away and grow past the corner of the fence. But, given that it is the male, I’m not too concerned about reigning it in.

My trellis is built with 8’ posts which are about 2" into the ground, so it is just above the bill of my hat but low enough to hit my head, And I’ve hit it a lot. So, if you can, make it at least a couple inches taller than you, at least if you plan to walk under it to harvest and prune.

I mow under mine, but the grass doesn’t grow as much now that the vines are more mature. There is more moss.

Ok I need to know just how big and wide the hardy kiwi can get and not hurt the integrity and health of the plant.

The above is definitely not too big. I wouldn’t mind it being 5’ longer on both ends.

In the older planting, I ended up removing several vines and making a much larger trellis for one that I thought produced good fruit (Cordifolia). It has 4 bars/wires leading out from the central point and going 10’ for the 2 bars and ~15’ for the wires. So, that is about 50’ of kiwi vine. It seems much easier to prune, but I’ll need to get back to you on productivity. The male for that planting got cut down when I had someone removing some trees. It is growing back, but the only pollination this spring was me waving a branch (from the other planting, ~150+ feet away) around a couple times. There is some set, but not as much as the Cordifolia graft I made in the newer planting (replacing Chico, as Chico and Jumbo are actually the same cultivar, and not that great).

Rossana is the other good cultivar. Issai is productive and precocious. Geneva is just OK. 49er was pretty good, but not productive at all (may be my fault as it got so large it shades itself- that may be why there is a recommendation against massive vines). Ken’s Red is finally fruiting (a bit) now, after 10 years (it had 1-2 fruit last year, that I must have picked at the wrong time…).

Does anyone know someone who’s an expert