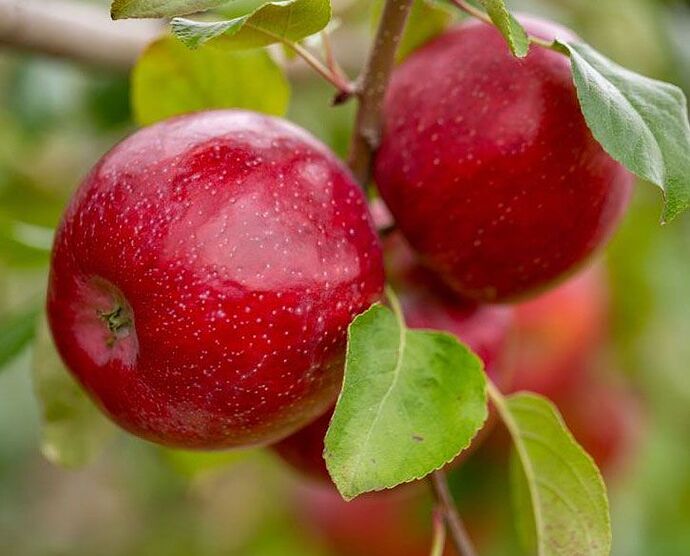 New University of Minnesota variety, notable for its disease resistance, is the product of a ‘Honeycrisp’ cross.

I’m really interested in the “2 forms” of apple scab resistance that is claimed. I’m sure one was inherited by the liberty parentage…but where does this second one come from and how does it differ? Is it novel in some way or have we seen this second set of genetics before in other varieties? If anyone comes across info on that please update the thread, interesting stuff.

Edit: while searching for info on another apple I stumbled on this paper: historyPRI.pdf (550.0 KB)

Turns out the PRI efforts alone identified 6 different genetically scab resistant variants, although there efforts ended up centering around the vf gene. Wonder if they were able to get 2 of these genetic sources into Triumph or if they identified and sourced there own parentage.

Thanks…I now have one on order.

Please let us know how it works out for you. Looking forward to your fruit report

Take your pick but there couldn’t be 3 with the same name Triumph.

I wonder how it is on black-rot. Scab is not that hard for a home grower to control.

I don’t know. But I do know crossing Honeycrisp and Liberty was one of my picks for hand pollination…now, somebody else did it for me; and I can move on down my list to some others.

Liberty does great down here near Dallas. I’m interested!

Yeah, and you don’t need to grow a thousand trees to get a winner.

Thanks, good to know. I was gonna have the kids pick a name for the tree since the university hadn’t yet. Probably still will for our yard at least, they had some more interesting suggestions

And I wonder if it’s prone to bitterpit like Honeycrisp?

I got the “Triumph” tree like many days after it had been shipped…seemed dormant and ok…but rather than take a chance, I cut the top out and added it to a Frankentree. So, if that succeeds, I might get apples sooner…but the one I purchased is going to be set back a year. (If it lives.) No sign it’s breaking dormancy yet.

Never did buy a Honeycrisp, but do have a small limb of it on my first multi-grafted tree.
I have others in the “family”…Keepsake, Frostbite, etc.

SkillCult seems to have half a dozen “winners”…and I don’t think he’s grown out 1,000 seedlings yet…but I could be mistaken.

I think Alan is talking about it takes a 1000 or more seedlings to produce a new commercial cultivar. If you pick two good parents and cross them the chances that the cross will produce a good apple are probably something like 1 in 4 or 1 in 10. But that apple won’t meet the rigorous criteria that a new commercial candidate will need to meet to avoid being culled.

Backyard breeders have different goals and more modest criteria. Skillcult is trying to do something different. He is working on apples that ripen extremely late or have unusual fruit flavors like the Etter apples. In fact, Skillcult talks about the differences between the goals of a commercial breeding program and his goals in one of his youtube videos.

There has been a gigantic loss of genetics because of the commercial apple business.

And I don’t know but it may be intentional on the part of commercial folks and universities they fund to spread the ‘rumors’ than only one in 1,000 seelings are of much value…
but it has had the effect of discouraging many from planting “pips” and raising “seedling” apples.

My ambition in breeding is modest…but I have collected almost all the varieties I desire to experiment with, and more besides.

I encourage you, mroot, to spread the message…1 in 10 should give you a pretty nice apple for your troubles if the parents of that apple are both good apples.

For commercial breeders, it is a 1 in 1000 situation and they have limited funding. I am sure there are commercial breeders that would like to breed a russet with unique flavor and high disease resistance but no one is funding that. They have to work on projects that have funding or they end up unemployed just like the rest of us. The breeders only get funding for apples that have great customer appeal either to the average buyer or to at least what the industry thinks average buyer wants.

I think there are quite a few amateur apple breeders worldwide and a fair number of professional breeding programs as well. True- a lot of cultivars have been lost but many have been preserved and lets be honest many of the ones lost were in many cases rather average or even low quality. The situation is worse for sweet cherries in terms of diversity. For tart cherries it’s pretty bad 95% of trees planted in the United States are Montmorency. So apples are in better shape than many other fruits.

I think a bit differently about preserving the diversity of apples and other fruits. If you breed trees the trees need a place to go. A nursery needs to carry them and people need to plant them. If people don’t plant them the cultivar dies out. So if you can increase the backyard planting of trees you can increase the survival of small niche nurseries that carry odd stuff and by that keep a large number of cultivars in existence. Since the population is much more urbanized than it was in 1890 I think the way to do that is offer small trees on dwarf rootstocks that can be grow in small spaces in city backyards. If people knew how to be successful with apples (this forum helps) and could get trees for small growing spaces I think we could keep more cultivars in existence.

I happen not to be impressed by Montmorency…prefer the dark colored juice of some other
‘pie’ cherries!

I agree with you here.

It is a numbers game. But the number you need to hit, changes on your goal.

oversimplified
When breeding lets assume both parents have roughly 6 desirable traits.
Some of the offspring will have 4-5 desirable traits. most will have around 6. And some will have more. Those that have a lot and very specific desirable traits are selected for commercial planting. And new commercial varieties must match or exceed those. For that you likely need 1000 seedlings to find such a winner.

Another thing is growing style/climate. A commercial variety. Or even a variety aimed at hobby growers, usually needs to be able to preform well in a lot of climates/circumstances. The one you breed yourself for your own use. only has to be able to do well for you and your circumstances.

I’ve had that one in a thousand discussion with others.

But, a lot of fine apples are overlooked. If accidental ‘pippins’/seedlings hadn’t happened, we would not have either red or yellow delicious. Arkansas Black, Hudson’s Golden Gem, Cameo, Rall’s Janet, Golden Harvey, Hogpen, Hollow Log, … never mind, that list could go on for 5,000 more varieties.

The little backyard grower or experimenter is going to have to carry on with propagating the genetics of rare old varieties and create new apples from ones that aren’t perfect “10’s” if we are to keep the genetic diversity of the species going.

R and Y Delicious, MacIntosh, Cox O. P.and now Honeycrisp are what’s in the genes of most new apples. Russia and some ‘old world’ breeding may help keep some diversity of genetics.

Money, of course, is what things boil down to anymore though.