the cherimoya and durian were absolutely rich, creamy, and exquisite.
the tamarind and rambutan were a unique sweet-sour combo. The lychee was rose petal fragrance-in the mouth, and the longan was a sweeter, milder flavored, and nutty version of lychee 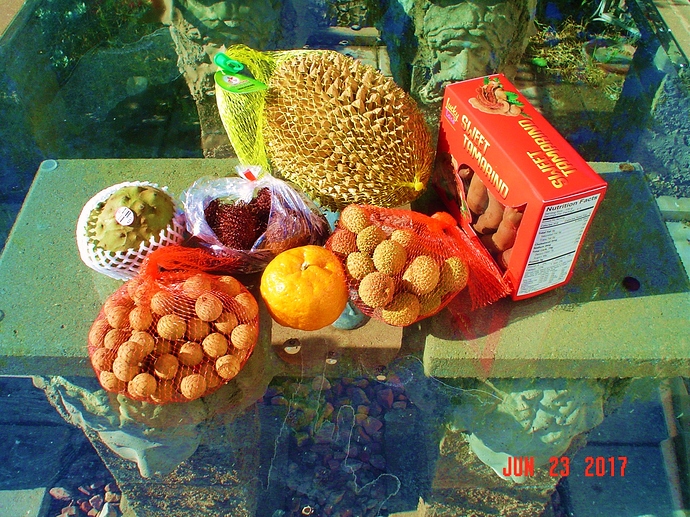 durian before and after 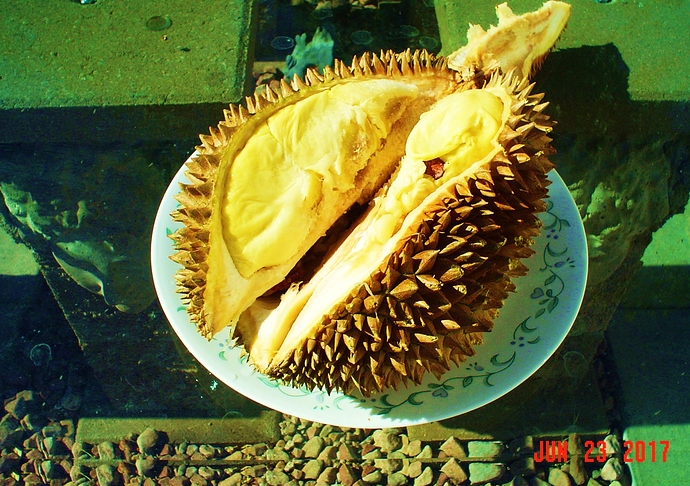 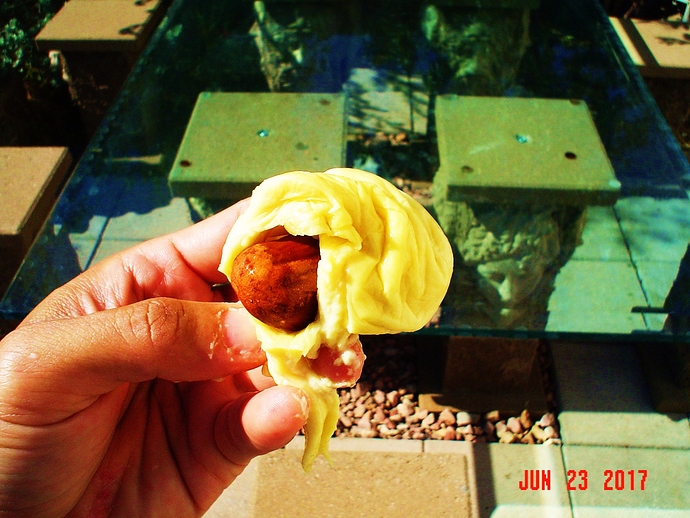 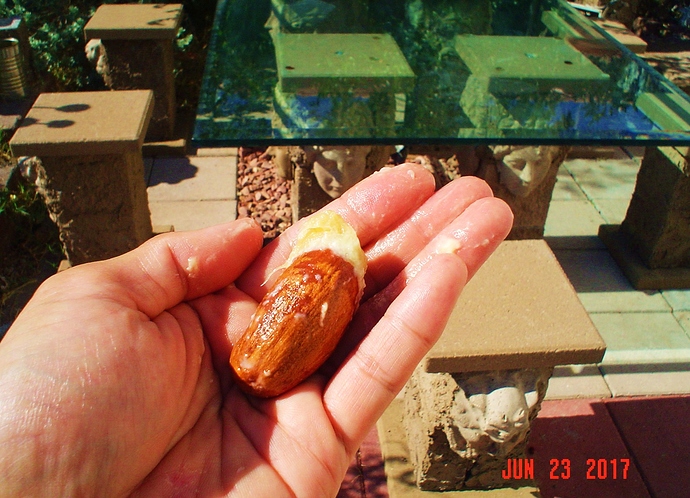 Where did you buy them?

Thought so! We have a couple of them nearby as well.

I will bring a 35 pounds Jack Fruit and We will have pig out.

just remembered, you’re in cali! You have more 99-ranch stores there am sure

you betcha! Total fragrance-in-the-mouth these giant figs. Speaking of fragrance, the crunchy edible pulp are actually the petals and sepals that we eat 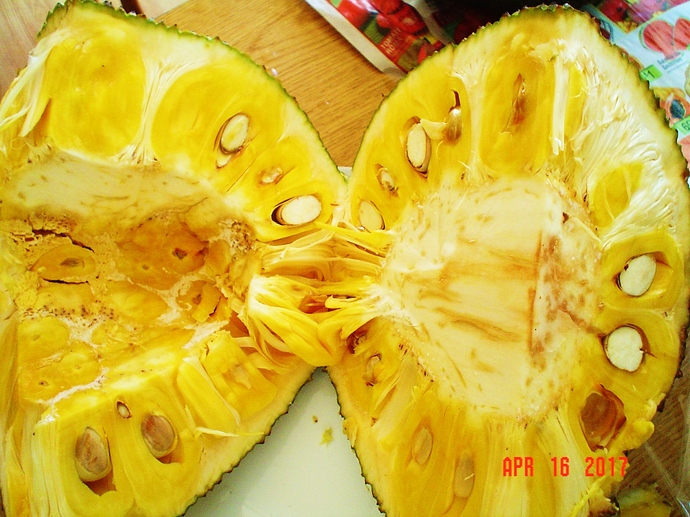 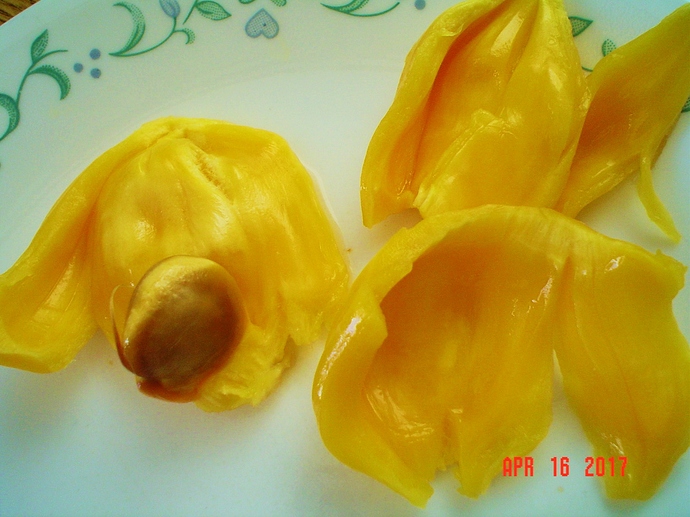 Wow! Never knew Jack Fruit is in the Moraceae Family – although in a different tribe than Ficus (Ficeae).

quite intriguing right?
and even more intriguing is that even though durian and jacfruit look quite similar and are both strongly-scented, durian are actually more closely related to okra. If you’ve ever picked fresh okra, you may have gotten poked by tiny okra spines, which is quite evident on durian. And when slicing up okra and durian, the compartments which house the seeds and pulp are eerily similar as well. Durian also dehisces like okra when way past ripeness.

makes me think he spent many years of his life in the tropics. Everything he says is spot-on about isolating the best jackfruit.

I’d love (outside of the humidity) to live in the tropics and grow my own chocolate, bananas, coconuts, palm oil…

Isn’t there something that coconuts don’t grow very far inland?

I’ve only had jackfruit in the can…same for mangosteen.

I do wonder if you lived in the tropics…would you crave stonefruit, apples?

You are sooo lucky!!

I do wonder if you lived in the tropics…would you crave stonefruit, apples?

coconuts can grow inland. Generally speaking, coconuts are more productive inland than when grown near the beach. Salty coralline beaches are not as fertile as regular soil. Only reason coconuts seem healthy in beaches is because they seem to be the only trees one will see in postcard pictures… Just so happens that coconuts are tolerant of poor, saline soil, but it does not mean will be super-productive, compared to trees that are growing on black volcanic earth with plenty organic matter. Cooler, arid climates are the other limiting factors.

only had jackfruit in the can…same for mangosteen.

the canned variety approximates semi-ripe jackfruit, and they use the thicker/crunchy cultivars instead of the softer more aromatic varieties. Canned jackfruit is generally insipid, and the syrup it is canned with tends to be sweeter than the flesh. Could have been washed out from the flesh in the canning process… There also are cultivars which are already sweet at the relatively crunchy stage, but also get to be aromatic and super-sweet as the softer and thin-fleshed varieties.

as for mangosteen, selling it in canned form is injustice! The pulp is altogether quite delicate when fresh, so the canning process takes so much away of the texture and flavor of fresh fruit

lived in the tropics…would you crave stonefruit, apples?

apples and stonefruit are craved by many in the tropics. Quite a novelty especially during holidays. But generally speaking, not preferred as staples. Have yet to meet folks who’ve expatriated from the tropics (to temperate countries) who’d be fine having temperate fruits exclusively every day and forever. All of them, myself included, will have lusty cravings of the tropical stuff, and wish to be eating them every day… Whereas many retired expats to the tropics(from temperate countries) will be fine having tropical fruits,and nothing but— the rest of their lives… It is an unfair assessment, of course, since there’s a much wider array of species(on top of cultivars) of fruits in the tropics, so even if the regular joe finds durian and jacfruit too smelly, he’d still be satiated by more than a handful of tropical species compared to temperate ones…
Speaking for myself if to retire in the tropics, will surely crave sihong jujubes, persian mulbs, tree-ripened apricots and some peaches

nothing more than treatment for ‘withdrawal symptoms’ lol

Those make me feel homesick

I like all but cherimoya. Never like the textute, maybe, because I am so used to sugar apples.

Hope you will have an opportunity to buy fresh mangosteen and jackfruit in Asian stores in your state. I think you will like them even more.

[quote=“jujubemulberry, post:11, topic:11621, full:true”]
makes me think he spent many years of his life in the tropics. Everything he says is spot-on about isolating the best jackfruit.
[/quote]That guy lives in Florida, he does lots of research and he travels to learn, he used to be a very unhealthy eatting person and he went all natural, he has a company that sells juicers too.

Look him up here https://www.youtube.com/user/growingyourgreens