Roxberry Russet is ugly. For most consumers the ugly appearance overpowers everything else. They don’t
know bettter 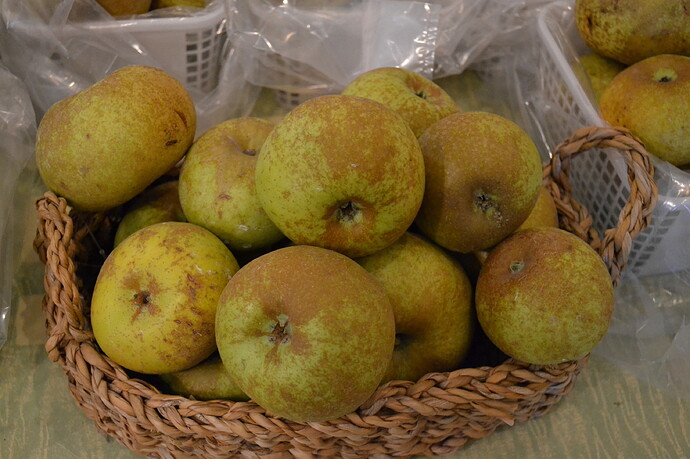 That’s not ugly. But then my opinion is based on eating experience not looks.

Double @fruitnut! They are the best. More russet they have, testier they are. I love those. Are they ready? Or it is last year picture?

I think it’s fair to say that a russet fruit has to be a little better than an otherwise similar yellow or red fruit, because it didn’t make it on looks.

I would totally buy that if I knew they were supposed to look like that!

Unfortunately, most buying customers are not like us. Some of my friends did not even want my tree-ripened peaches that have some specks of scab on the fruit.

Only those who know, would gladly buy those russeted apples. They are in a minority.

Your apples look great. I have just a few on my tree this year. I am anxious to taste them when they are actually ripe in a few months here.
The Washington State apple people are to blame ( IMO) for this dislike of apples that are not bright red and shiny. They have done an excellent job of advertising and convincing us it has to look like a Red Delicious apple. I eat with my mouth not my eyes. Most people want to eat with their eyes. Those people are missing out of so much good fruit and good out there.

I think if you cut these apples up , peeled the skin off and let people taste them they would have a totally different opinion of them. Also when you showed them the actual apple with the skin on they be very surprised.

We will make some samples available so folks can try them. Perhaps that will help.

We planted the RR because we liked the history of the apple and advertised the apples as the first apple in America or the “Pilgrams Apple.”

These are this years apples. I had to pick them a little early because lots of apples were dropping.

When I’m food shopping I’m more picky about how my fruit is. I guess I just expect perfection in store bought fruit. Out in the orchard I’ll feast on a half eaten apple, ugly apple, bug bit apple or a tarnished apple. People think the beautiful Red Delicious is a great store bought Apple, yuck!

I got hooked on the story as well. That is why I planted one just to see how it did here. Either the name of an apple of the story behind the apple makes me want to try some apple varieties out.
I noticed some of mine were dropping early as well. Not within the ripened timing period. All my apples have done the same thing, dropped early. Some about 3 weeks early. Even my peaches were early this year by about the same amount of time. We did have some strange weather this spring. Perhaps that threw everything off. Who knows!
There is one apple I keep debating on" Jellyflower Sweet". Just that name alone makes me want to buy that apple tree.

Isn’t that the truth. A Red Delicious in a store looks great. Then you bite into it and it is like a semi wet cardboard apple with no taste at all. The flesh is usually a light green color as well. WAY under ripe. If you let them sit at home then they become a mealy mess when you take a bite out of one. They should make the Red Delicious in the store 'For Display Only" " Not For Human Consumption".