I have discovered a wild seedling apple tree on the edge of my property that has a very interesting trait. The apples hung on the tree fairly late into late fall/early winter before snow started to fly and I mostly forgot about it. I did notice from afar that there were apples still hanging…and hanging…and hanging until spring where there were still some freeze dried apples hanging on. I just went to check on it today and there are still a dozen of last year’s apples hanging amongst this year’s foliage and newly formed fruitlets. 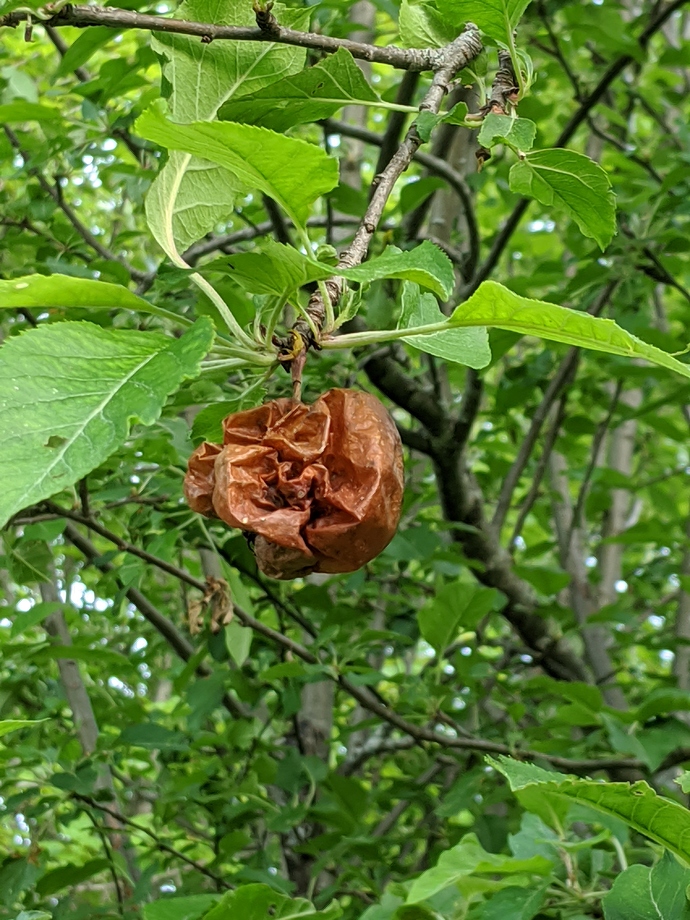 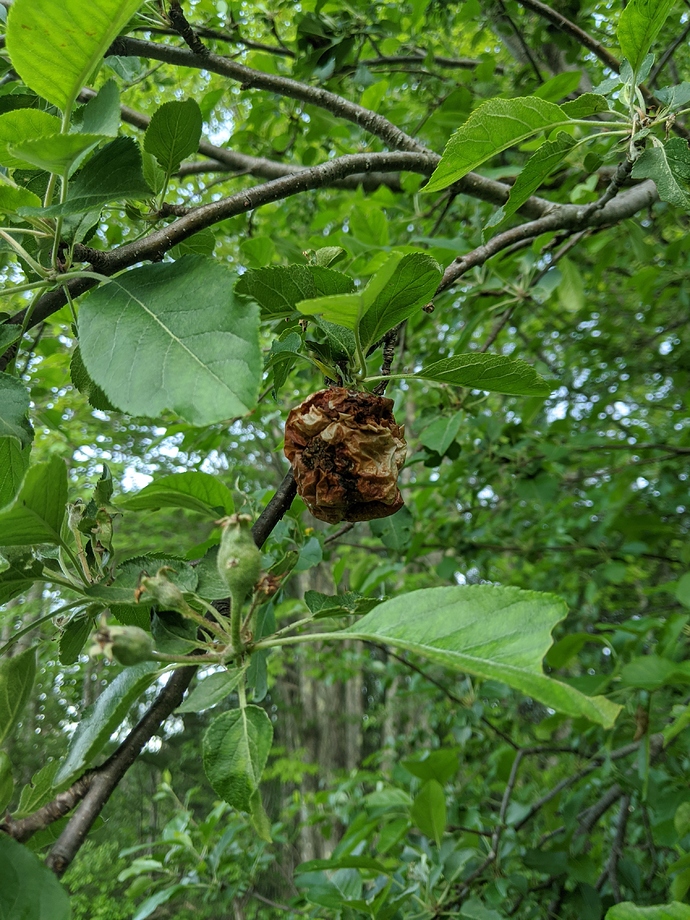 So my question to the community is has anyone ever seen this before? Is it common among late season apples? I have never noticed something like this around me before (Midcoast Maine).

The seedling looks to possibly have northern spy as a parent (the general shape and texture of the fruit seemed very northern spy esque although I only picked a few) and seemed fairly scab resistant. I do plan on grafting it into my orchard to trial it further.

While interesting, I would be concerned that the hanging fruit would be a source of disease and insect issues for the coming season.

Very good thought…I hadn’t considered that angle. Something to keep in my observations for sure.

Steve @SkillCult has been working on late hanging apples like the apple you have pictured. It’s a trait his breeding is focused on. I think some of the videos at Skillcult.com discuss this at length if I remember correctly.

The idea being that a late ripening, late season apple would work well in climates with long growing seasons. Instead of having to store the apple thru the winter you could just pick it off the tree. He might be interested in getting a scion from you.

I have indeed seen his videos. That’s actually the first thing I thought of when I discovered this tree I need to rewatch them. I just wanted to see how “common” a trait this was and if others have seen apples doing the same thing. If it is a gene worth saving for someone (Maine is not the climate for a spring hanging apple) I would definitely do some more observations and testing and send out scion to anyone interested.

here in n. maine I’ve seen some wild apples do this but generally they are small inferior apples. come dec. the grouse and deer are all over them.

Yep, its true, I’m really interested in long hanging apples. Not just the ability to hang though. Just hanging on for dear life through thick and thin is good for deer I guess. I’m looking for apples that can survive winter conditions without cracking and rotting, actually ripen late, and are of good quality. I’m looking for each of the traits one apple, which makes it worth eating long past Fall. There are apples that ripen early, but hang steadfastly. I got seeds and pollen of a variety from Europe this year that had crisp apples hanging on the tree when the pollen was gathered. He said the climate is somewhat similar to mine. It was from Germany, or maybe holland… my brain is swiss cheese stuffed with cotton balls, being slowly infused with coffee. I would be interested to know at what point apples like this in the N.E. are permanently damaged by cold, if they are otherwise edible up to that point.

But the phenomenon is real and definitely practical here where I live. I have a pretty good list I’m working with already, possibly somewhat in order from latest to earliest ripening The European apple which I called april Max on labels this year, March Hedge (temporary name again, found in a hedge nearby here), Lady williams, Pink Parfait, Pink Lady, Pomo Sanel, Whitwick Pippin, Something labelled Katherine which may not be, Hauer Pippin, Allen’s Everlasting, SamYoung will probably be added to that list and maybe one or two of my own seedlings derived from Lady willams crosses. Also, probably crabby lady from freddy Menge, a wickson x Lady william’s cross. I might be forgetting something (swiss cheese…) That’s a pretty great list to be starting with. There are some very high quality apples in there, with unique traits. Just within that gene pool, I think it is likely there is potential for a spring hanging apple of excellent quality. I’ve also made other crosses already that are now growing in the U.S. and beyond. More of them will be drifting in as the word gets out and it becomes a thing in people’s minds. I encourage people to look for late hangers and try to assess other traits to see if they might be candidates for breeding, or just good to eat the way they are. One of the major next steps that needs to happen is getting more of these grafted in different places to start assessing performance. Some are definitely more durable here, and my guess is that some will be more cold tolerant than others. A guy from Sweden told me about one that is traditionally harvested around Christmas.

Thanks for this writeup. Huge fan of what you’re trying to do with your website and videos, this late hanging project included. Although it would be impossible for me to fully test this seedling for warmer climates like yours I will for sure keep my eye on it and graft it out just for fun, if nothing else. It is good to know what qualities/genes yourself and others are looking for out there in general so us fruit enthusiasts can keep our eye out. You never know what genes will pop up where and even though late hanging has little value in Maine, if it could possibly help people elsewhere I’m all for it. I will for sure be collecting some of the data points this fall/winter you mention…such as cold damage, ripening time etc.

It might be useful there for late juicing and cider. There is someone in Canada breeding for winter hanging cider apples.

Yates hangs a long time, I missed a few high up last winter and they were still on the tree in spring all shriveled up.

Yeah, you mentioned that recently. Definitely need to get that one and test it.

Yes Should be good for ICE Wine

This is where the apples , or grapes are left over winter,
they are pressed still frozen , and the sugar is concentrated
(bringing inside to press the sugar doesn’t concentrate )

This is expensive Wine, ($50) since less wine is produced
there is a artificial way to do it with frozen berries but the sugars left hanging like that on the tree is sought after.

I like the idea of people in warm Climates as well picking as they please though .

If the apples get mealy could still be bred with a sour apple , or harder apple (baking) maybe, but I am no expert on apples so wouldn’t know of that .

What do you all think If it does get mealy in the south, while it hangs
Would Breeding with a harder apple let it hang well ?
Or would it be better to breed with a Sourish apple to let hang?

I think that is pretty cool you found it !
Keep in mind even could be marketed for deer , and hunting stands as well.

The tree has a fair amount of apples on it this year. I have been testing them every few weeks, the flavor is definitely not of high dessert quality but I will still continue to document some other data points. They have already gone through a few hard frosts… interested to see if they continue to hang late and when they become unusable. I’ll post a few pictures when I check it next.

Might be of particular 8nterest to the deer-hunting crowd, a number of whom have started planting apples, pears, and such, as ‘soft mast’ crops on their hunting properties.

Some diseases like black rot can cause apples to hang on trees over winter into spring .
This is not desirable, not edible , a source of disease for the next crop.
The latest hanging apples I have here are gold rush and Arkansas Black.
Gold rush can freeze down to around 26F or so and still be edible.
Will hang on tree into winter , but become mush a lower temps.
Ark black will drop late.

A good number of wild crabs will hold fruit here until late winter. Great source of food at a “hungry time”. I go out with a 10’ piece of copper pipe and knock a bunch of fruit off every now and then. Great places to look for shed antlers come spring.

Honestly I was just thinking of that Looking up pictures of Malus fusca (spines) today.
I thought maybe people could breed that trait into the domestic apple
Or maybe some of those hangers have a small percentage of crab in them.

They hang a little to good I lkike the very sour pea size ones for teas
(raw fresh , brought it, and into the freezer to freeze they break down easier)

Now I am wanting the opposite put a tarp under , and have them hang less for gathering for tea hahaha.

the grouse and moose love the crabs once frozen well. sometimes they persist into spring and the moose get " drunk" on the fermented apples. not many deer here.

It has been a tough year to gain any useful data. Early hard frosts coupled with a significant drought have caused a lot of trees to drop early around here. The few fruits that didn’t get much bug damage have held on reasonably well, but I don’t think this is the greatest year to be gathering useful data on this specimen. Here is the best apple I’ve had off of this tree to date: 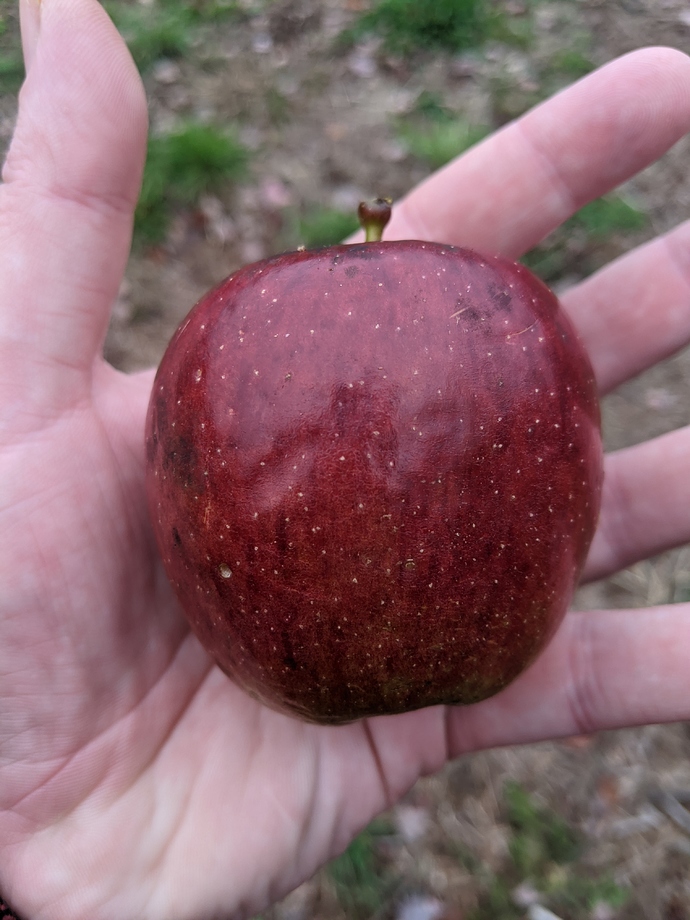 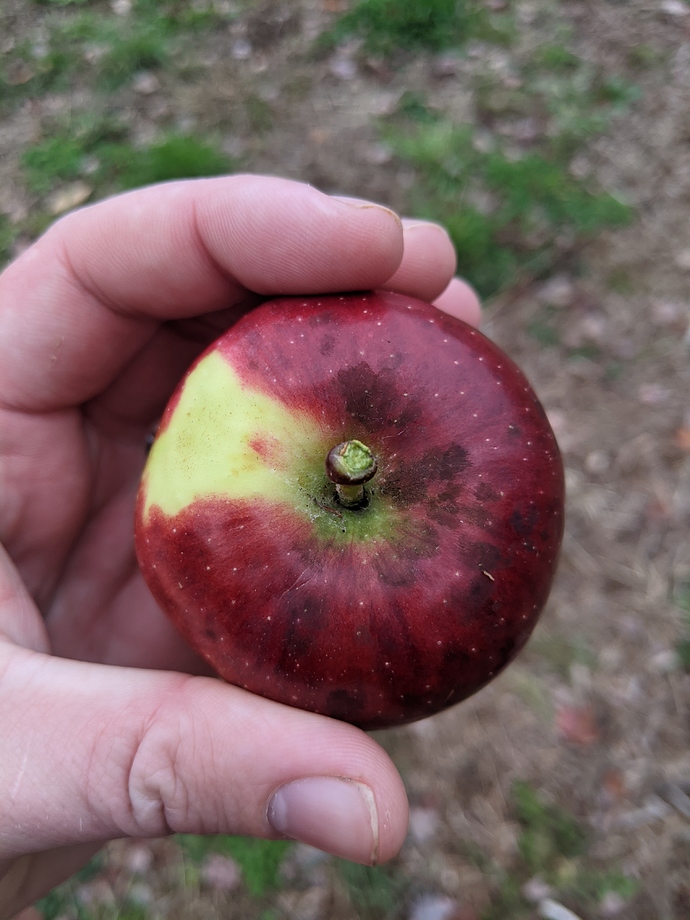 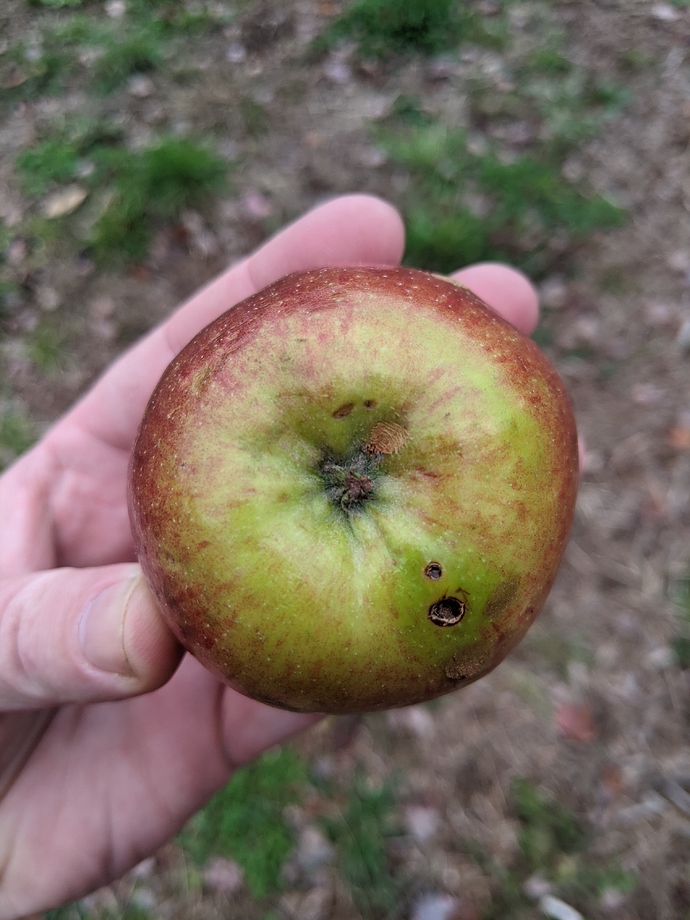 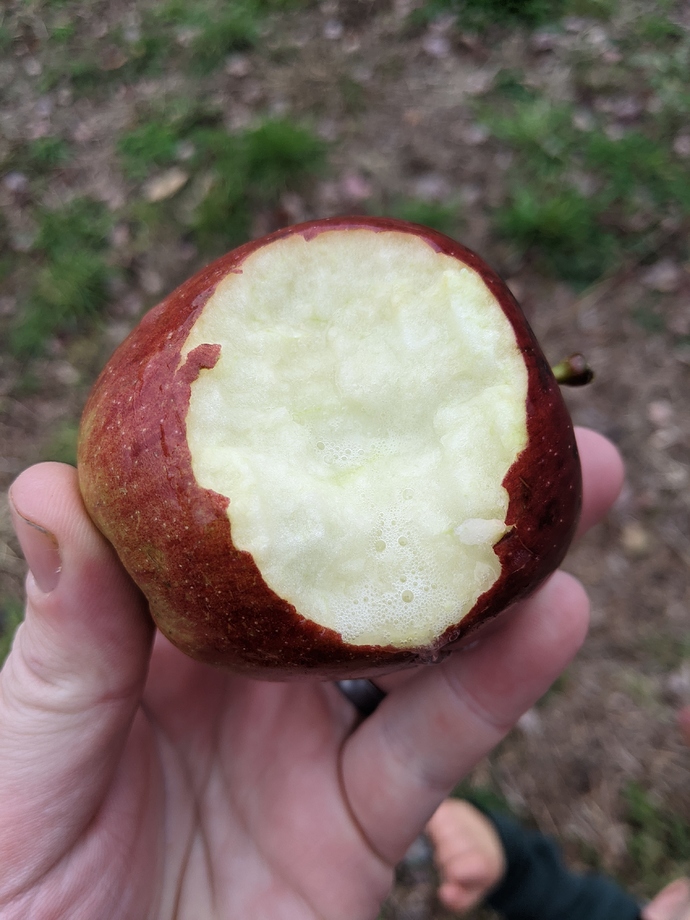