In Scott’s spray guide, he mentions the difficulty finding lime sulfur spray nowadays and suggested that “pet dip” is the same material.

Has anyone ever used the pet stuff on your trees?
What’s the dosage?
Is there a preferred brand?

After a 1 second Amazon search I found this, but I have no idea about it.

I haven’t used it on my trees but have used it on dogs. It is more concentrated, something like 4x the concentration usually. So treat with respect. There could in theory be something added that is not good for fruit trees, it is a risk. I have a couple years supply now and when it runs out I am either going to make my own or use the pet dip stuff.

Here is someone that used it. 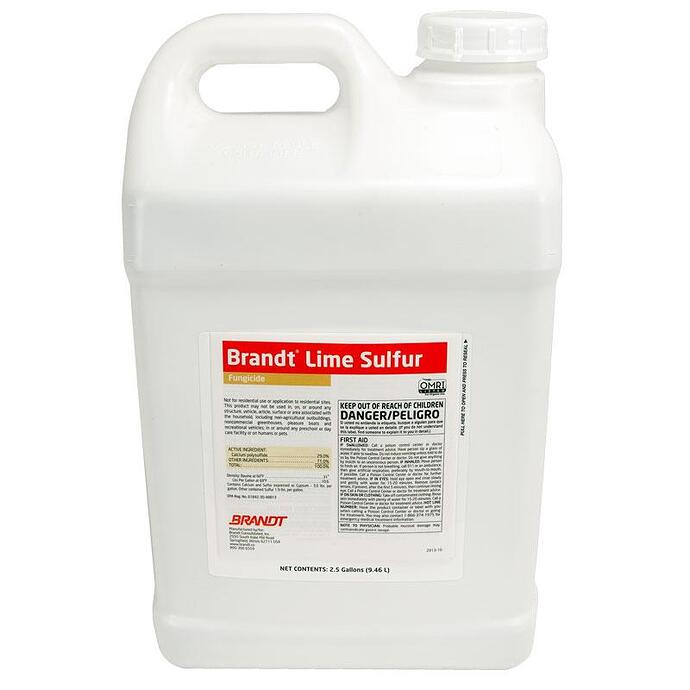 This is about 10 years supply for me, I think I will get some of it one of these days.

I thought about trying that stuff too. I would base dosage on the real lime sulfur spray and compare concentrations.
Lime-Sulfur is a 28% concentrate of Sulfur Polysulfide.
This vet stuff is 97.8% Sulfurated Lime Solution. Which I believe is the same thing as Sulfur Polysulfide (OK, I did some research it is EXACTLY the same thing) It’s made the same way, Appears you would probably use 1/3 to 1/4 dose of what is suggested for Horticultural lime-sulfur. It should work IMHO.
Luckily I have a bunch of Lime-sulfur. I hoarded it when i heard it was being taken off the market.

I spray my blackberry with it, but I hate it. I hate the smell and I hate the “danger” signal word on the product I buy.

I’m not spraying the pet dip version but the farm version - 29% Calcium Polysulfide. I spray 5 gal/50 gal of water on one acre of blackberry which is a lot less than the suggested dose. It takes almost a week for the smell of rotten eggs to go away!

I would be easier for me to switch to oil and copper rather then the Lime-Sulfer If I could confirm it would be just as effective.

Has any one tried this:

It is 29% Lime Sulfur (Calcium Polysulfide) , which is what the Brandt Lime Sulfur seems to be.
Brandt instructions on groworganic.com call for a mix rate per gallon of water from 4 Tbs to 1 cup.
That is quite a difference. If the Bonsai is the same, that would be too expensive at the high rate, but probably not too bad at the lower rate.

I saw this stuff at my local garden center a few weeks ago. Fertilome Lime Sulfur Spray.

Edit: Oh, it appears that it is discontinued, but that probably no one here knows what to do with Lime-Sulfur so it has been on the shelf for a while.

The bonsai stuff is really expensive. I would recommend getting it from 7 springs or Peaceful Valley, they sell lime-sulphur now. Shipping is limited at Peaceful Valley to certain states, not sure about 7 springs. The quantity is fairly large, but you go through it rapidly since the dose is high.

I was spraying some last week from the old stash I have (@Levers101, like you I found some old stuff at the local garden center; I bought up a couple gallons

). The container started leaking from the bottom after I had used it and set it out, making a mess and stinking up the garage. Good I caught it in a few days and not months.

I always thought the sulfur spray would keep the deer away… I don’t have any proof… but I didn’t see many deer after I sprayed it in the past.

@ztom Just bought that stuff (different brand), and will be using it as soon as we dry out some here. As I recall, it was twice as big a bottle (16oz) for roughly the same price on ebay.

I still have my old Ag sulfur-Lime bottle and instructions, so I planned on diluting the pet stuff to match the Ag stuff (3 parts distilled water : 1 part Pet) and then using the Ag instructions. IIRC about 5T per gal.

I manufacture the lime sulfur solution. The information stated on the ingredients is only the solution as a whole and the inerts are the sediment or impurities. The calcium polysulfide (real part that works) in this concentration is the same as the 29% solution you purchase for plants. I hope this helps.

I am glad I found your post here. Based my digging, the concentration of the pet dip is about the same as the or maybe less than the one used for plants. I am glad your post confirm it is the same. Thank you!