Varieties of fruits recommended for planting by Ragan

I was in Apricot recc’s for our area pointing out the booklet [Varieties of fruits recommended for planting] (Varieties of fruits recommended for planting : Ragan, W. H. : Free Download, Borrow, and Streaming : Internet Archive) (PDF under this link) by Ragan, its from 1904. Last night I was reading it in more detail, it is very useful for apple, pear and plum recommendations by region. Since it is from 1904 it obviously is for heirlooms only, but it is very interesting to see which varieties they recommend for which regions. For example for my region they don’t highly recommend any European plums. Based on my growing experience I know exactly why, they rot like crazy and the curc goes wild on them. There is only one Euro they recommend, Bavay’s Green Gage, and it is one of the better ones for me, it ripens late. Also by looking at the warmer and colder regions compared to where I am you can see there are varieties they believe prefer warmer or colder, and many are confirmations of what I have learned the hard way.

Anyway if you are growing heirloom apples, pears, and plums it could be worth looking through these lists for your region, and particularly looking at what they were highly recommending in 1904.

Here is the regions map from the book. These numbers are a lot better than the hardiness zone numbers! Its a similar idea to the Sunset zones of California. 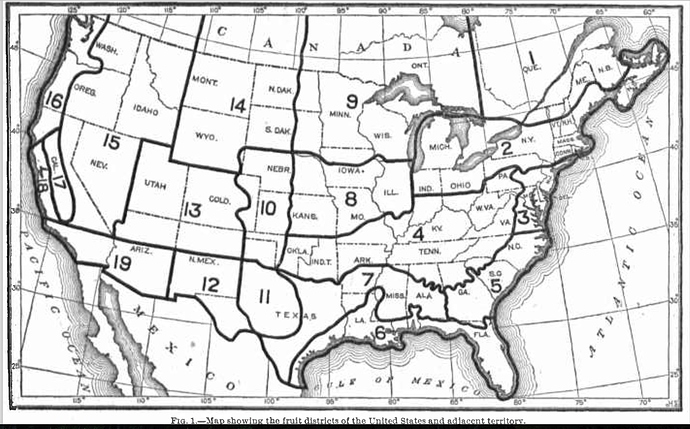 He lists General Hand too, but that one flopped for you.

Oh right, I saw that but then forgot it was there. General Hand never fruited, the problem was the curcs were always getting them all. I might want to try it again sometime in a better spot (all my Euros I originally put in a spot with too little light).

Thanks for posting this, Scott - it was a fun read, though the layout leaves a little something to be desired… As you point out, the regional comparisons are particularly interesting. A number of the apple varieties that they suggest for region no. 2 are things that I’m going to be trying here in Western Mass, so I guess I’ll be seeing how some of the old recommendations hold up.