That melon looks awesome. Picked my first two big stripe yesterday. First one was very sweet. Second one had dry dentril, yellow belly, and lumpy buff appearance, but didnt resonate when i plunked it. I thought it was maybe overripe. Wrong. It was way underripe. Grrrr. Another variety, quetzali, im trying for the first time. Every single one has split open.

I finally got a Brix refractor and cut another one yesterday it come in at 14% which didn’t surprised me, because they are sweet as sugar.

I’ve got to get some. Are they from wilhite’s?

I got them from seedway but willhite carries them

Week #3 for the biggest Orangeglo. How much longer do you suppose? 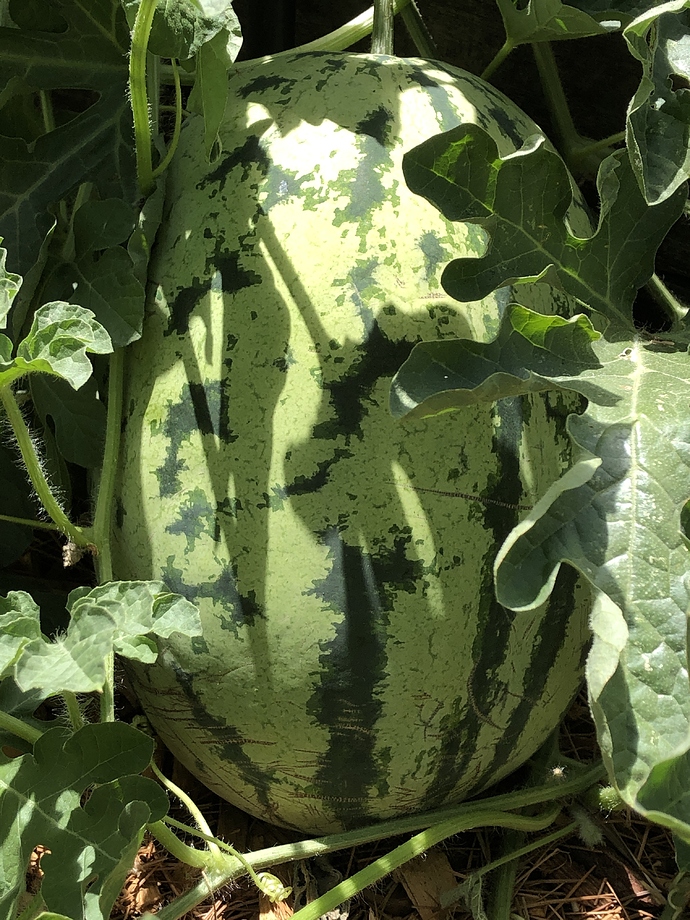 My first Orangeglo of the season. Could use a few more days of hot dry weather. I went ahead and harvested this since I noticed the stem was partially broken and wasn’t going to get any more ripe. 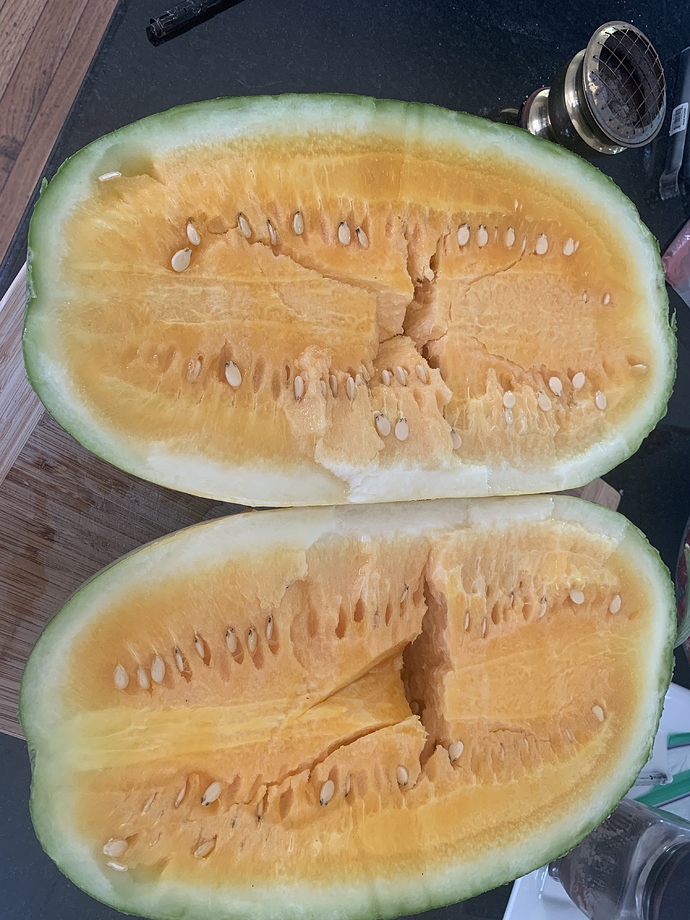 Ways to tell if a watermelon is ripe:

Mark Twain described it this way: “A ripe melon says ‘punk’ when thumped, a green one says ‘pink’ or ‘pank’.”

I have 5 Orangeglos growing in my raised bed. I think I grew too much in that much space. The vines start wilting in the morning and recover in the evening. 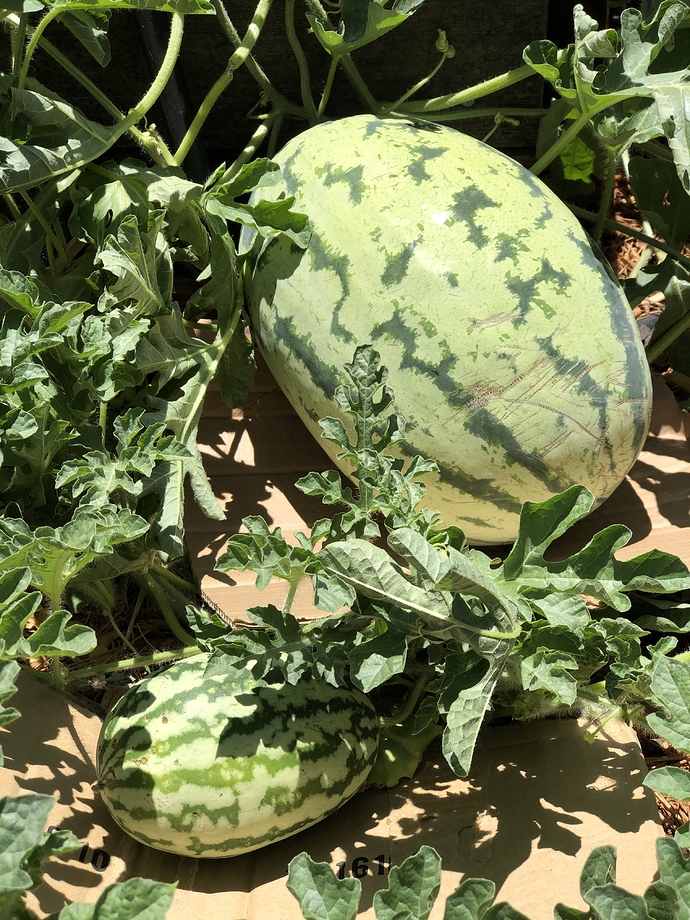 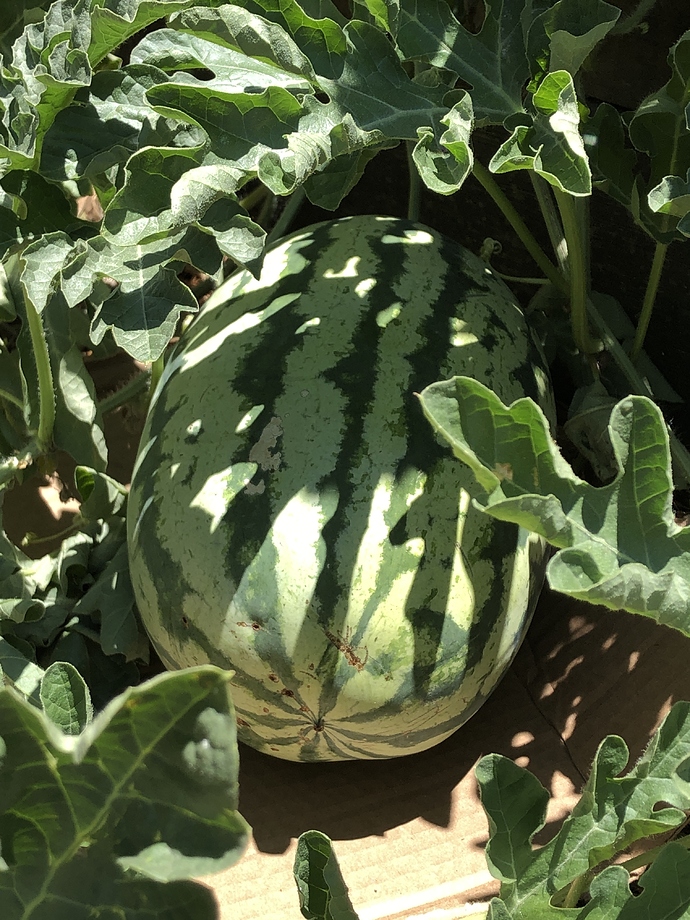 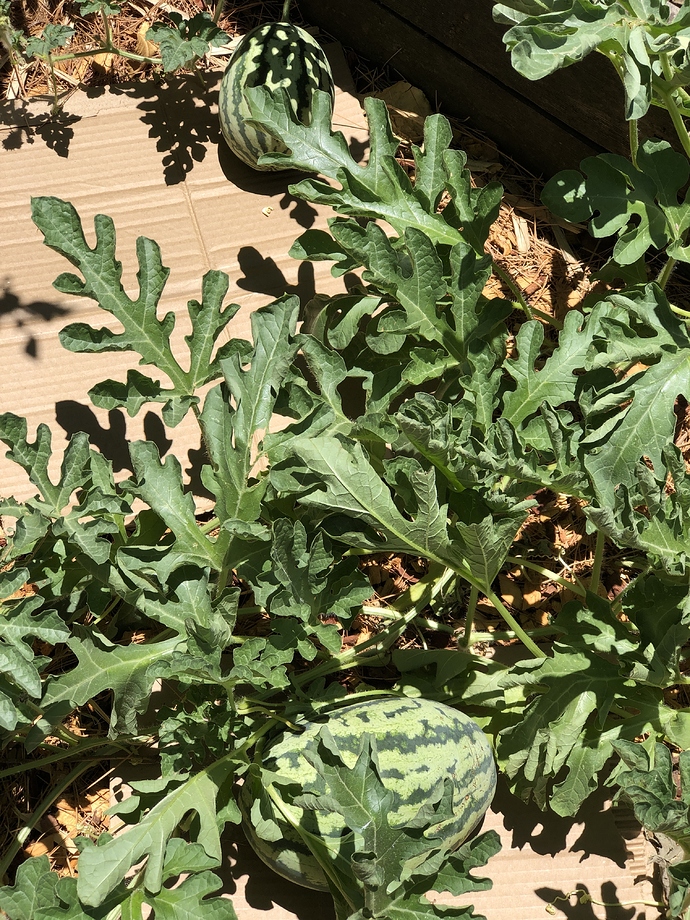 My other patch with spread out vines is doing a lot better! 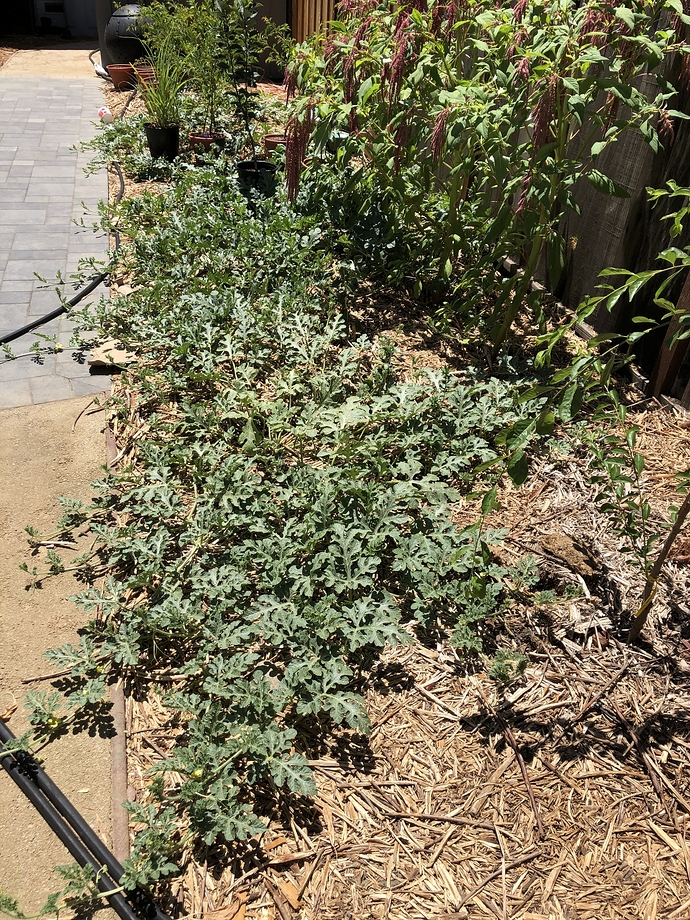 I’ve got one row of second generation sorbet swirl ( don’t believe it is F1) and a few orange glos this year, and trying some F2 sugar cube lopes. Still a month or so away, good luck everyone,!

I’ve grown sugar cube the last two years. That’s a nice tasting melon and productive. So far here’s how my varieties stack up for flavor (basically sweetness) this year: hannah’s choice>=sugar cube>sugar queen>ha’ogen. I’m curious how your F2s turn out.

I picked the first ripe Bradford watermelon today and have it in the refrigerator chilling. It weighs 32 pounds and is about 20 inches long with dark green color overlaid on barely visible wide stripes. The surface had the correct lumpy/bumpy feel, the tendril was dry and dark brown, the ground spot was large and white. Thumping produced that nice “punk” sound that signals a ripe watermelon. It also had a very heavy “feel” when I picked it up. I’ll take pictures when I cut it later this evening.

Edit: can’t post the pics yet, but the description is easy. Bradford is a “pink” when ripe watermelon as compared to the deep red flesh varieties such as Wibb or Dixielee. This color is typical of older varieties of watermelon described as red when ripe. Flavor was superb. Sugar was arguably the highest I’ve had in a watermelon. The negatives are that the rind is thick at 1.5 inches and there were some small white streaks through the flesh especially near the ends of the melon. Even the white streaks were edible with excellent flavor. This is contrary to my experience with other melons where white streaks usually mean off flavors. The white streaks may have been from growing conditions. If I had been growing in better soil, they may not have been present. Overall, this is the best watermelon I’ve had in 3 years. None of the commercial purchased melons were even close to the flavor and sweetness. I have had a Yellow Moon & Stars and a Jubilee at the peak of flavor that were as good as, but not better than this Bradford. I can’t wait for another one to get ripe. Meantime, half of this one is in the refrigerator.

Blacktail mountain watermelons, two weeks ago these where the size of a quarter. 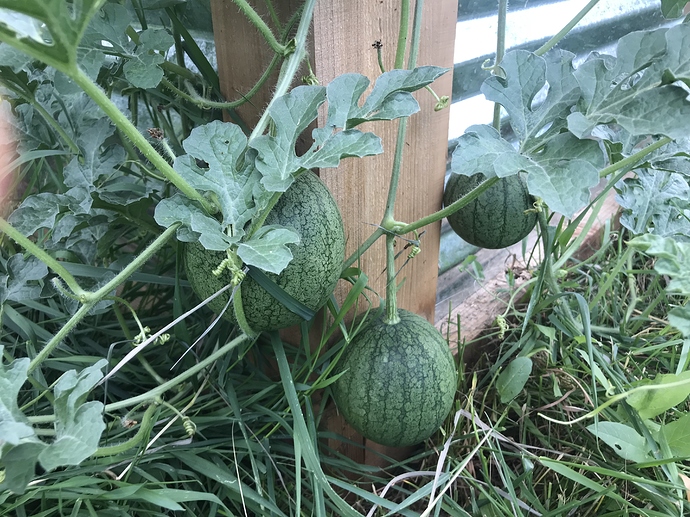 Damn squirrel took a bite probably. Should I take this one out or do you think it might recover? 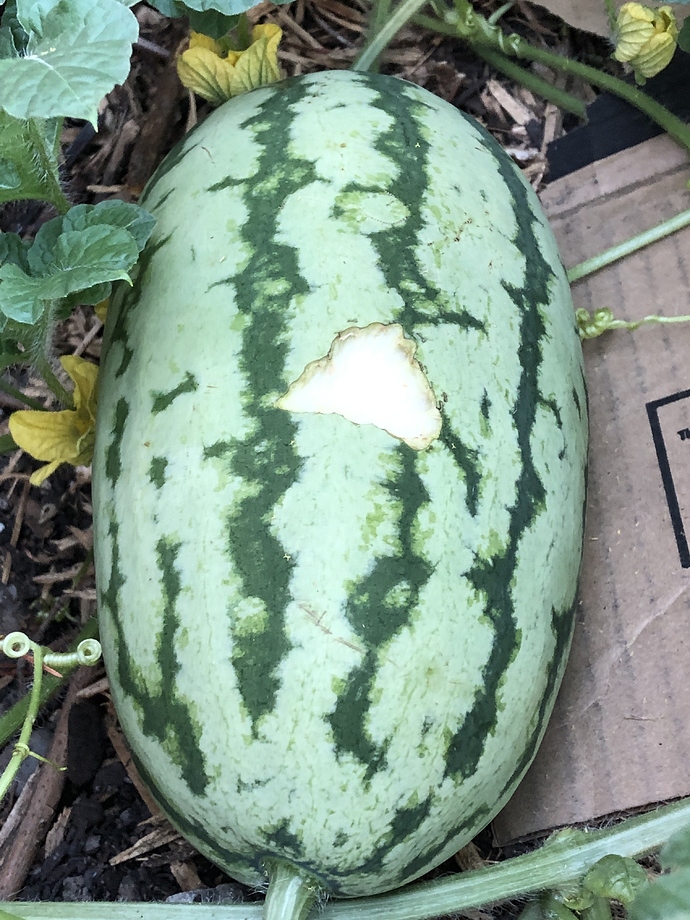 A Jade Star is the first ripe melon of the season. I was surprised to see the tail drying this early, it was Aug 7th last year. We have been really hot though. I also thought the sweetness might be off with all the rain we have had here lately, but it was a really good sweet melon. 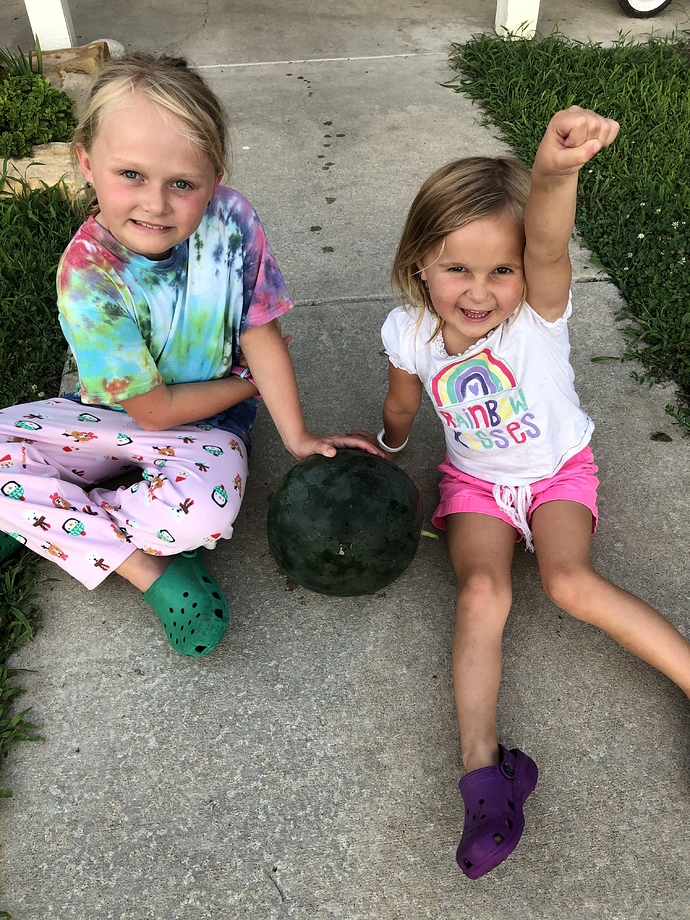 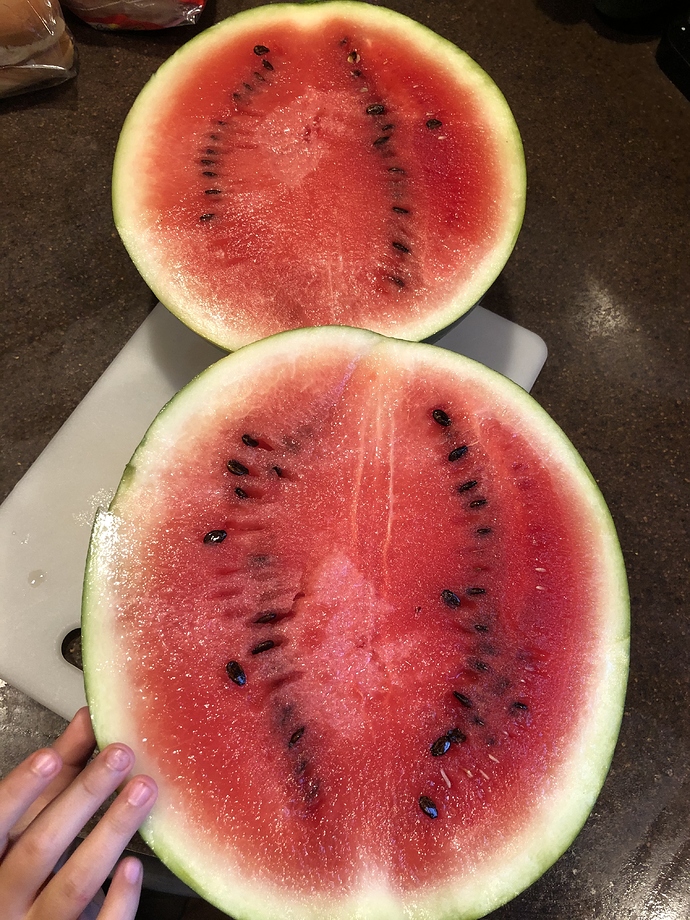 Help me tell if this Orangeglo is ripe please! Tendril is close to being fully brown, skin is faded with bumps and lines running across. But no pale spot on the under belly. It’s been 7 weeks since fruit set. 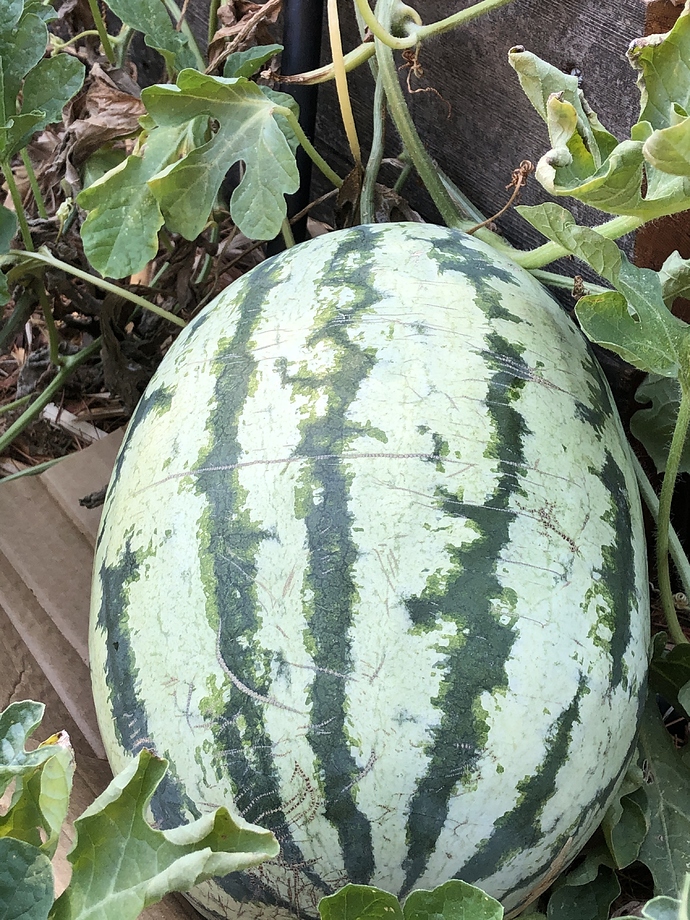 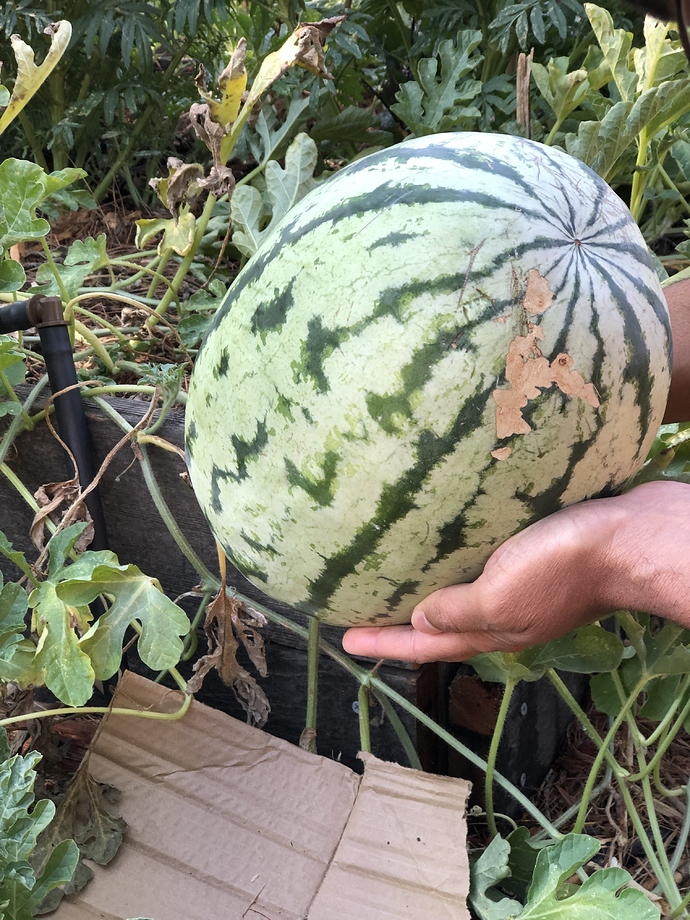 Thump test to see if it is ripe. From what I can see, it does not look quite ready.

Hot weather will definitely speed ripening them up. I have picked melons within 28 days of setting here when we had a dry summer.

What does bottom of melon look like. Looks like u got some fungus on your vines and that will mess up using the tendril technique.

The pale spot would blush orange on mine when ripe, wonder why no spot on yours…do you rotate it?