What can you do with a ripe cacao pod? 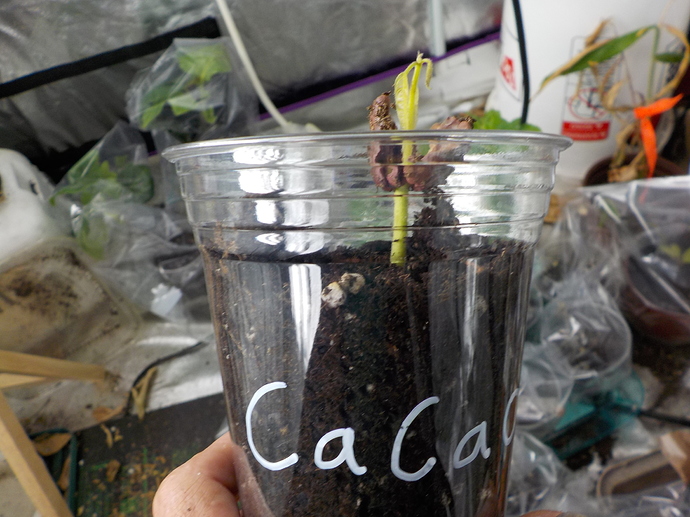 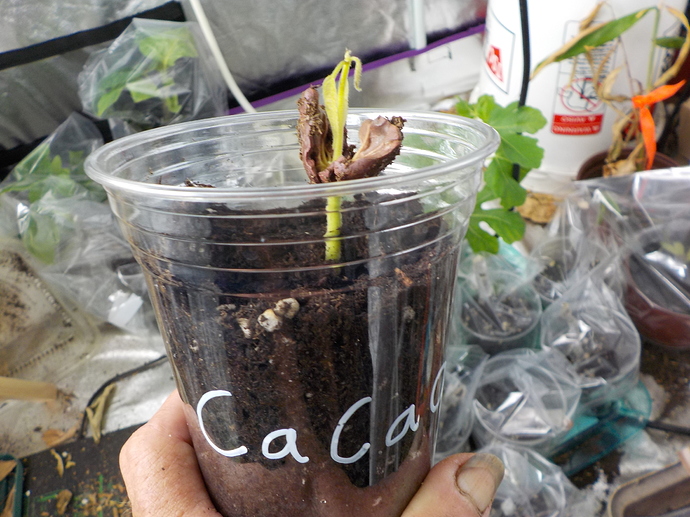 The seedlings have very strong stems and don’t appear to have cotyledons. They start out with two leaves and another tiny pair above.

That’s the inside of my indoor grow tent, @mrsg47 . Its normally empty this time of year, but this year it’s full of heat loving plant starts.

My daughter only planted 7 of the seeds. Two are sprouted. That seemed to take no time at all! The soil on top of three others looks like they are pushing up. From the looks of the stems, I’m glad I used the really big plastic cups. I think the roots are likely to need that room.

the brown “wings” are the cotyledons - if i remember correctly.

Wow that’s cool! It will be fun for you to try and grow. Where did you get the seed? Your going to need some steady heat for that plant. I watched videos years ago. I even had saved a how it’s made episode on chocolate that made me want to eat milk chocolate! In fact I could go for some right now. Those pods are big did you get a whole pod?

Thanks, Scott. With that shriveled brown look, I’d taken those to be like a seed coat still hanging on.

They’ll stick around for 3-6 months and then fall off.

Johnny, I can give them steady heat, outside in the summer here, and in my indoor grow tent during the cooler weather. I’m outgrowing my tent, though. I don’t know how people will react if I add more of them.

It has a rather large footprint.

Those pods are big did you get a whole pod?

Yes. Actually, my daughter did when we were at Viveros Anones, Sherry Ballaster’s organic farm in Puerto Rico. She was very determined to pluck at least one, and clamored down a steep mountain hillside to climb the tree during a thunderstorm in the rain forest to achieve that goal. I posted a pic of her holding her prize in the thread, Souveniers. At the top of that thread are pics of the cacao pod along with other fruits we brought home. She planted 7 of the seeds and is fermenting others in the hopes of eventually making herself a cup of cocoa.

Mine havent done anything yet! Jealous!

That is great!!! I can smell the cocoa now. Can’t wait till you bring me the powdered chocolate to France!

I remember seeing the pod in your photo of PR “souvenir” fruits and like most people, found it intriguing. Like @Johnnysapples, I too have seen some videos on how its grown and how chocolate is made. What I’m more curious about is whether the farm you got in from in PR actually makes chocolate or at least sells the pods to someone on the island who makes it? I’d love to see that on a future trip down there. I didn’t know it grew in PR. Thanks.

Kevin, the best I can tell is that her farm is for personal use only. She does sell seeds for many tropical fruits, heliconia, and gingers when they are available. The most current availability list is here. She’s a woman with a warm and wonderful spirit who cares about the island, which is her homeland, and all living things.

Cacao isn’t an industry there in the way that coffee is, but grows in the same conditions as coffee. Here’s an article on the possibility of establishing it as a commodity there that Michigan State Extension published just this year. Infrastructure is in place for coffee processing, but not so much for handling a large scale cacao industry.

You might be interested in a tour of Hacienda Buena Vista if you’re in the Ponce area. It’s run by the Puerto Rico Conservation Trust. I wish I’d known about it before we left. It sounds like a tour we both would have enjoyed.

All very facinating information. Thanks so much!

There is good video on YouTube on how to make chocolate from cocoa seeds.

Here’s a photo update of how the little guys are doing. Five out of the seven have sprouted.

Here they are lined up. Sorry about the busy background. The pattern of the chair makes it difficult to see the smallest one on the left. 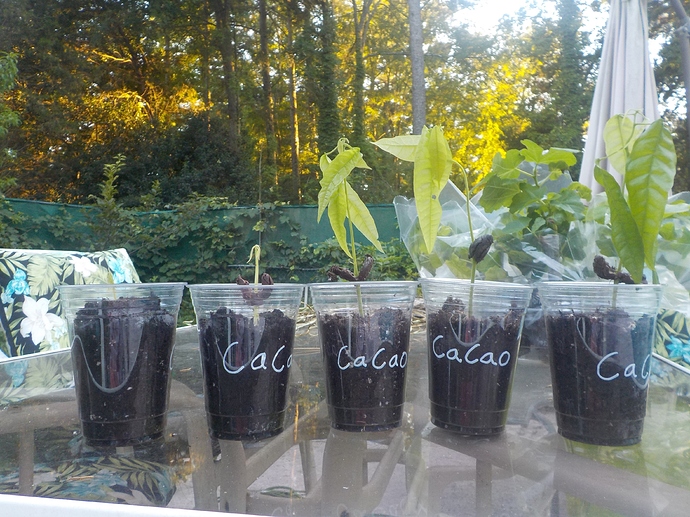 A different grouping of the same seedlings. 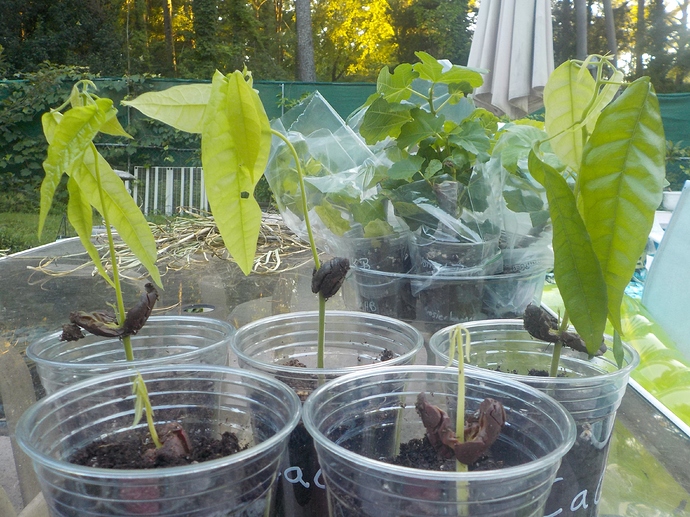 DSCN0647 resized.jpg3744×2808 2.4 MB
The background table clutter is some garlic set out to dry and a tray of young figs. I thought the way that they sprouted on different days created a nice opportunity to show just how quickly these babies grow. 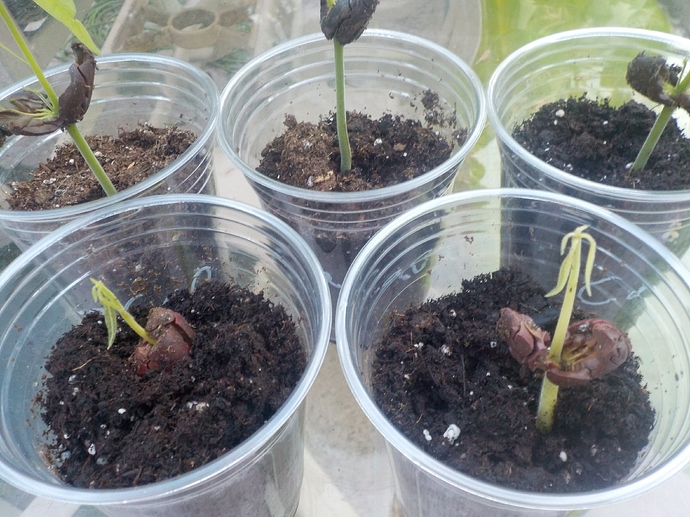 It was interesting that the roots on the most recently sprouted seeds are showing on the bottoms of the cups just as much as on the early sprouts. I think I should probably transfer them into something deeper fairly soon.

I hope you keep this going. I want some homemade chocolate, or at least see you make it.

How cool would that be, to someday make our own chocolate?! I hope the trees keep going and growing, too.

My daughter fermented the remainder of the seeds, and now has them spread out to dry and cure before the next step. Ugh! They looked disgusting while fermenting! I should have taken a picture, but it was a very unappetizing sight.

By the time all the steps are followed, she’ll only get a little bit of cocoa out of all the rest of the beans in that pod. I’m amazed that, with all the time and work involved, coffee and cacao products aren’t both much more expensive than they are.

I’ve heard that cacao benefits from an intact taproot, but it’s not necessary. All of the plants sold at Home Depot lack taproots and they grow fine.
I wish you the best of luck in getting some pods someday! Not only can you make cocoa with the beans, but the fruit itself is very delicious and surprisingly healthy. If only there was a cultivar with less seed and more flesh!

What area do they sell Cacao plants at Home Depot?