What is this plant?

What is this plant? I should know, but I’m embarrased to say that I don’t know. 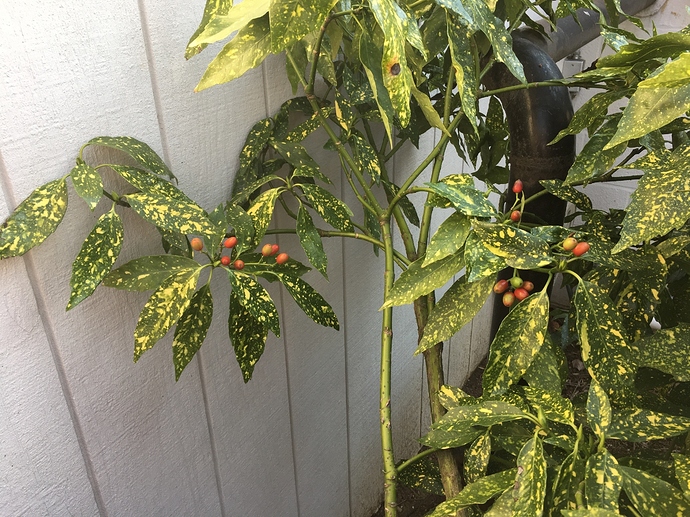 Surprisingly hardy plant. I’ve got one in my front yard that has been there for 3 years, and though it hasn’t grown too much, it’s never died back, though it does lose a leaf or two in bad winters…and this is in Michigan!

I got it at the Variegated Plant Nursery in Ct. I doubted it would survive, but he (the owner) was right… Neat place, btw.

got one in my front yard

gotta hand it to you, your collection is probably the most eclectic relative to your gps location.
from morus nigra, to microcitrus, to che, and even to r4t3!
still haven’t gotten over the fact that one of my jujus arrived by way of michigan

For me, it’s about collecting the unusual and growing what most would doubt would survive here…

High praise indeed given that you have literally written the book on Jujubes.

My local gardening society is all about natives, so I have never qualified to be on the garden tour, even though my garden is probably the most unique in the city…

We have a lot of that in my neighborhood. It must have been popular 50 or so years ago, all the plants look really old.

my garden is probably the most unique in the city…

i may sound prejudiced but am sure it is!

i guess i tend to associate michigan with super-frigid winters which could put even cold-hardy species to the test.

i guess i tend to associate michigan with super-frigid winters which could put even cold-hardy species to the test.

We are tucked in the southeast corner, and protected by the water. Chills is almost on the water. i went over there the other day.About a 1/4 mile away. It was colder in Kentucky this morning than it was here. So strange.

protected by the water.

i see now.
But still-- have to give @Chills some props for growing the other species in MI.

i mean, quite impressive he’s kept his morus nigra for many years!

But still-- have to give @Chills some props for growing the other species in MI.

Oh yeah, I agree! Konrad in Canada is also a very impressive grower. Wish he would come here. I too like Scott, like to zone push and grow the unusual. I have figs and cacti yer round in my yard. I found a couple species of yucca tree I would like to add. Scott and I both grow Bamboo too, I just found that he had a plant Thursday when I saw it. I now know three people with bamboo in MI. We also share the love of plants, not just edibles. I’m different from many backyard growers, as I love to grow plants, growing plants is my hobby really, not gardening. Well I do grow veggies, and the like too, but for me it’s just an excuse to grow another type of plant. Getting food is a bonus and is optional with me.
Again for sure I didn’t mean to take anything away.from Scott (but I did! A few pawpaws!

oh yeah, just remembered your fig menagerie! My fig collection is pathetically vanilla compared to yours, considering that i live in vegas, lol!

I also have learned it’s a good idea to have some proven varieties well adapted to your area, so if the zone pushing fails one year, you have a core of fruit you will always harvest. This has worked well for me.

The lake is truly a godsend. If it were not buffering my winter temps I wouldn’t be as successful in zone pushing as I’ve been. During this time of year, the opposite effects helps me as well. Even if temperatures are unseasonably warm here in Mi, my yard doesn’t warm up quite as quickly as it might (because of the mass of frozen water a quarter mile from my yard). This saved me a few years back when the great Easter freeze occurred (was that 2012?)

My in-laws live a few hours north of here and their summer is so short that they have had first freezes the last week of August.

I know of a bamboo stand in Grosse Pointe as well as a nursery in Harrison Township (Michi-Koi) that has some.

I have 2 more bamboo in pots, but I don’t dare plant them. The Phyllostachys Nigra in my front yard is marginal enough that I figured it would struggle with taking over. If I were to plant the Phyllostachys aurea it wouldn’t suffer the dieback and I’d have a fight in my hands within just a couple years.

The one in the back yard is Arundo Donax Variegata and it dies back yearly, as it is supposed to do. It’s restrained by the fact that it in shaded and not getting quite as much water as it would like (it can grow in standing water)

This isn’t my picture, it’s from Joy Creek…but it’s accurate (though mine gets much taller) 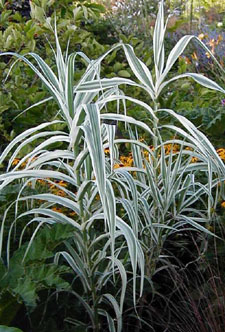