I’m dying to grow peas, I’ve got my eye on the tendril varieties, but I don’t think they could take my heat. I tried Fava Beans (a close relative) just before summer, a variety originally from Guatemala, and the plants were struck with a blight. None survived to flowering, though I blame the blight a bit less than the heat and dryness – I didn’t irrigate.

I’m growing a day-neutral variety of Winged Bean from Baker Creek Seeds. The plants died back to the roots after giving me a pair of pods, and they’ve now grown back and are flowering profusely, with one big pod so far. My hand for scale in the last picture (with a pair of purple yam bulbils): 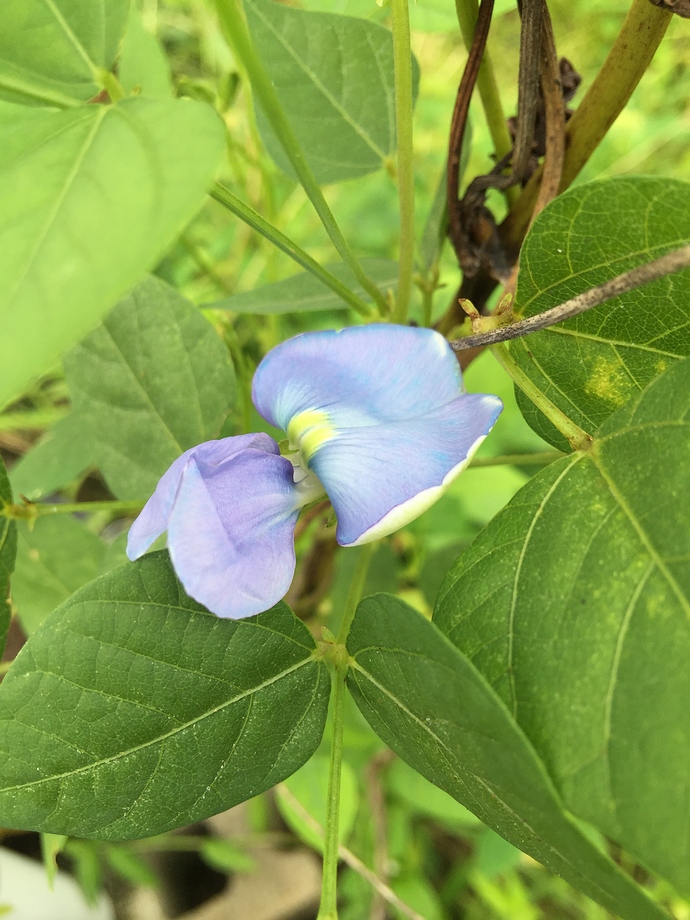 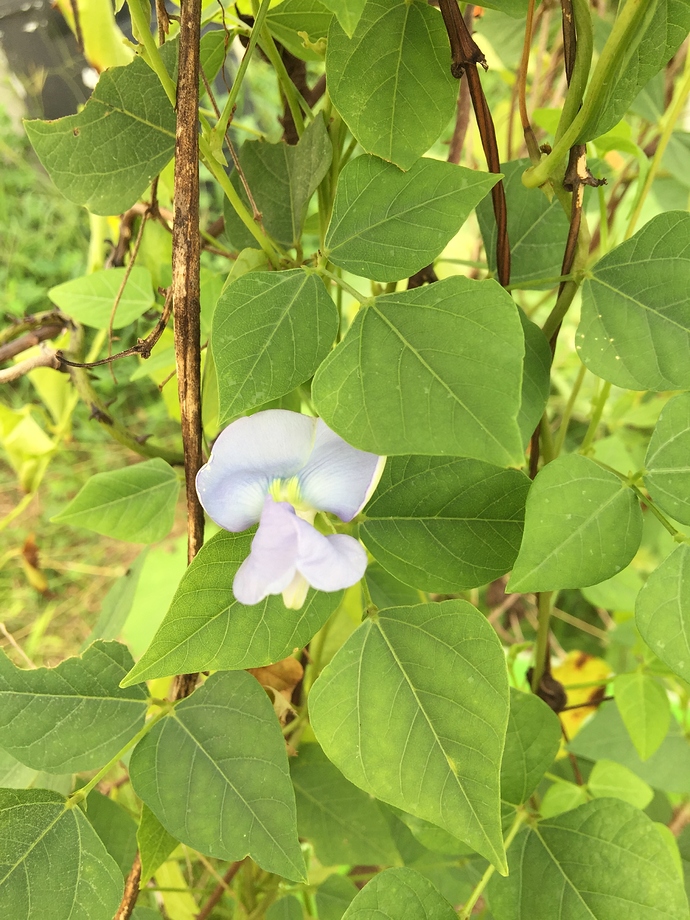 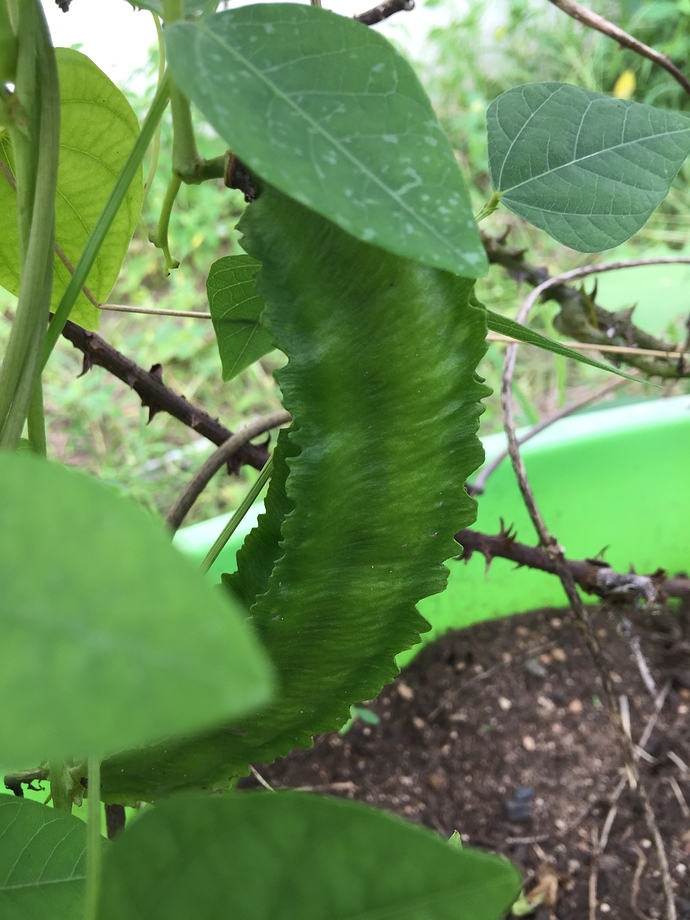 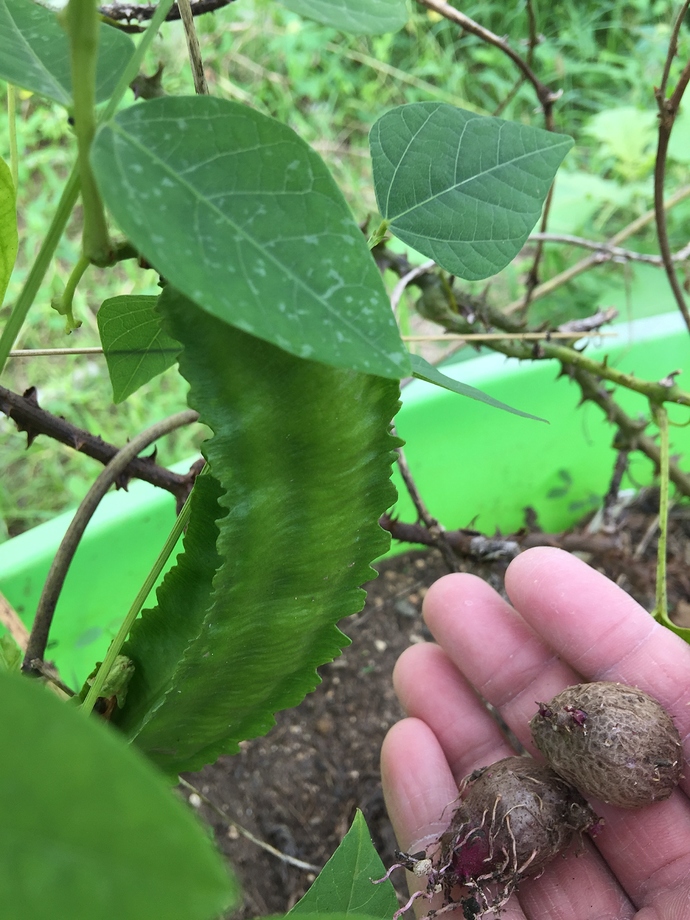 I tried Hopniss (Nutty #3 from OIKOS), but vine growth was somewhat meager the first season. With one survivor, I’m hoping the tuber will put on some more growth this season, and multiply into more tubers for propagation. I’m not sure if this particular variety sets seed on its own. Both of these bean species are sharing containers with yam vines, so that may account for decreased vigor.

That’s Peperomia pellucida alright. It’s a fairly common weed here, but nobody eats it. I’ve tried it, and found its flavor strangely minty, though I don’t recall the nuances (it’s been a while).

I’m collecting yams. Chinese Yam hasn’t been as vigorous for me as I’d like, but it’s a survivor, and with good starchy flavor. I got purple yams, Guinea yams, and several edible air potatoes to name a few. Yams are awesome! I also have Cocoyams (Colocasia esculenta, Xanthosoma spp. & Amorphophallus paeoniifolius).

I tried Oca early this year (varieties Mockrocks, Sockeye and Puka Ñawi), with Ulluco (Queets), Mashua (Copalis) and Mauka (seed-grown Blanco), all from Cultivariable. All I can say is, they really don’t like heat. Mashua was hit the worst, I fried one tuber by planting it in a sunny location. I placed the second one in deep shade, but while it did put out meager growth, it eventually succumbed to a stem rot (still not sure what dealt the killing blow, but the heat didn’t help).

Mauka put on some pretty good growth initially, but as the seasons got hotter, it would occasionally die back and return small. I put it in shade near the Mashua (though brighter), and it exploded with growth again. I lost 3 plants after returning them to the sun, and have one lone survivor, which I plan to put in a shady spot in-ground once it puts on a bit of growth.

Oca and Ulluco did surprisingly well for me, for a time, but between the excessively moist soil I used for them and the shady location, they started succumbing to stem rot. They died around the same time as some of the Mauka, after putting their containers in full sun.

I did neglect my plants in preparation for some family travels, which I feel contributed strongly to my Andean Tubers’ demise. I doubt Mashua will ever do well for me, but I think there’s a legitimately decent chance that Oca and Ulluco would do well for me, provided I plant them directly in the ground, in a well-drained yet irrigated, brightly shaded location (I’ve got a spot behind the house, near the vegetable garden, which would be the perfect spot, with mostly morning sun). I haven’t had a chance to try the others yet, but I placed an order for Oca (Wishkah), which I’m hoping to do better with this time around.

The last Andean tuber, common for y’all but exotic when grown in my neck of the woods, is the humble potato. I’ve sent again for some GRIN accesions, aiming to develop them for a tropical environment. Heat, moisture, pest and disease resistance, pigmentation, all of that, in diploid, tetraploid and wild stock. Tuberosum, andigena, phureja, cardiophyllum, ehrenbergii, and a few other wild species. I predict heavy losses in the first seasons, but once the survivors are apparent, selecting and improving upon the best performers should be simple enough. In the meantime, Potato Mint (Plectranthus rotundifolius) is giving me decent harvests.

@Caesar the kind I’m talking about are cowpeas, Vigna unguiculata, aka black-eyed peas, cream peas, lady peas, crowder pea, purple hull peas, etc. Same species as yard long beans. They absolutely thrive on heat. The zipper cream peas I grow taste a bit like sweet peas, but are much earthier. I got mine from Southern Exposure. http://www.southernexposure.com/vegetables-southern-peas-cowpeas-c-3_121.html?zenid=7FogGCZD6WRHXBJXgk2WF0

I’m sorry to hear about your fava beans! Those can be really tricky unless the climate is just right, but they are so worth it when it does work out. You might try Vroma fava, which is supposed to be a bit more heat tolerant. From my experience, it’s only a little more.

Understood. And thanks for the link! I’ll be looking into those Zipper Cream peas (and the Vroma). ¿Are yard long beans any good?

I had a sizable patch of Peanuts and Edamame that were doing well, but I didn’t get to harvest them prior to the trip. The peanuts are coming up again now, but I suspect the pigeons ate the edamame. I still have 5 seeds left of both edamame and fava beans (Ianto’s) in storage… Insurance for just such an occasion.

So to clarify you wait until a few light frosts then you dig it up roots and all and bring it to a shed or somewhere dark and damp and in between 40-60f? How many days do you do that for are you just waiting for it to turn a little lighter in color or? I have never been successful with radichio

Cha .cha… CHIA !
Yah . Chia
Well it’s not just for those pets.
The seeds are nutritious ,great in smoothie’s , fruit drinks ,etc.
This has been limited to growing in Mexico / Central America
Area due to its late blooming in the north ,won’t set seed up north. I have grown fields of it as cover crops, hopeing to get seed , but No. It did get 6+ feet tall, smothered weeds , and the deer did not eat it. But no seed crop.
The U.Ky. Has breed a strain that sets seed in Ky.
For sale on Amazon by Heartland Chia.
So I am going to try it.

@caesar i grew the same winged beans from Baker Creek. My first time growing it. Won’t be the last. I picked buckets of it.! 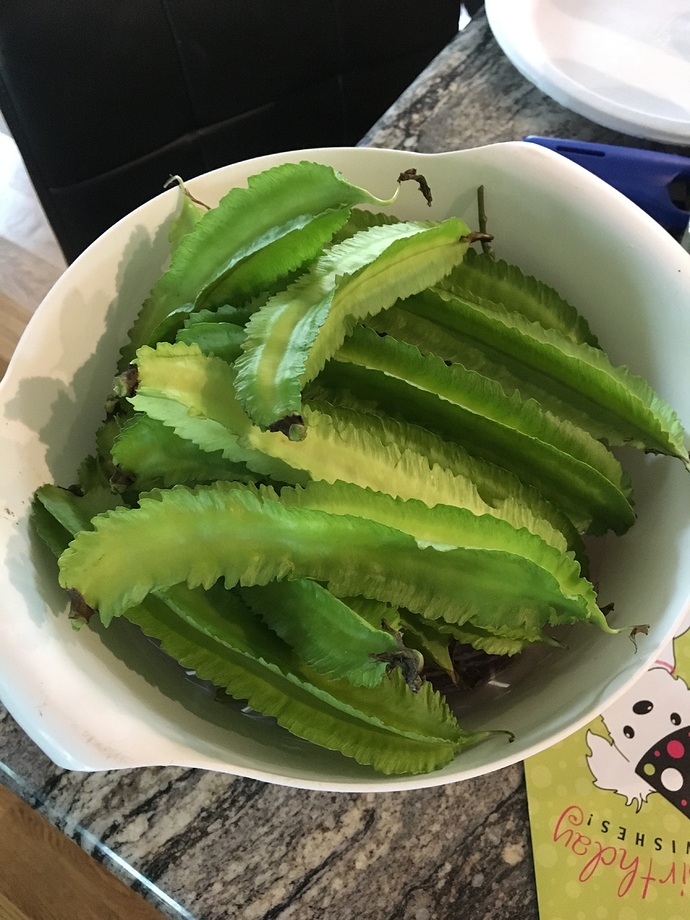 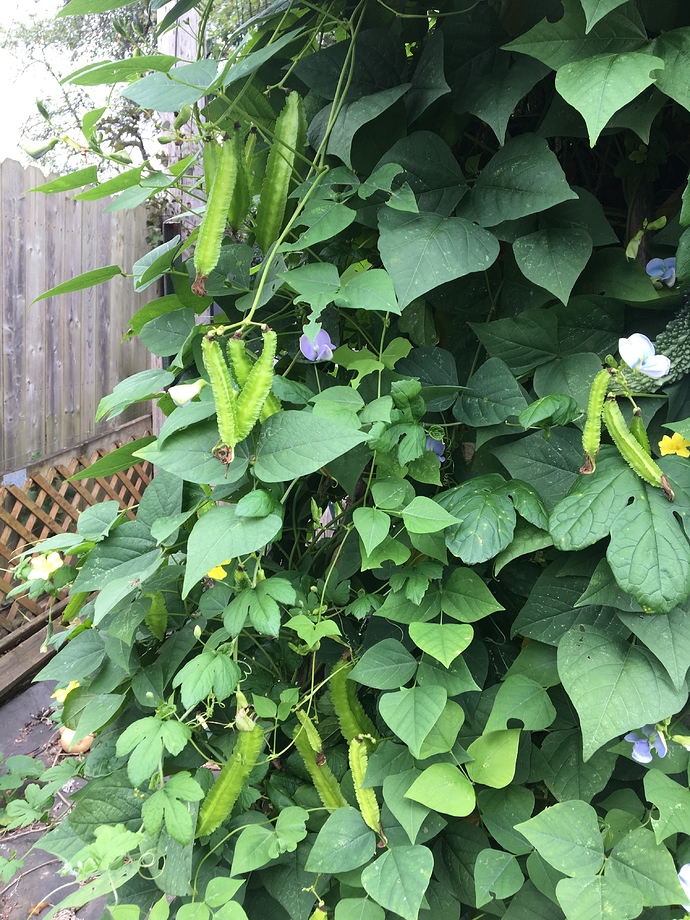 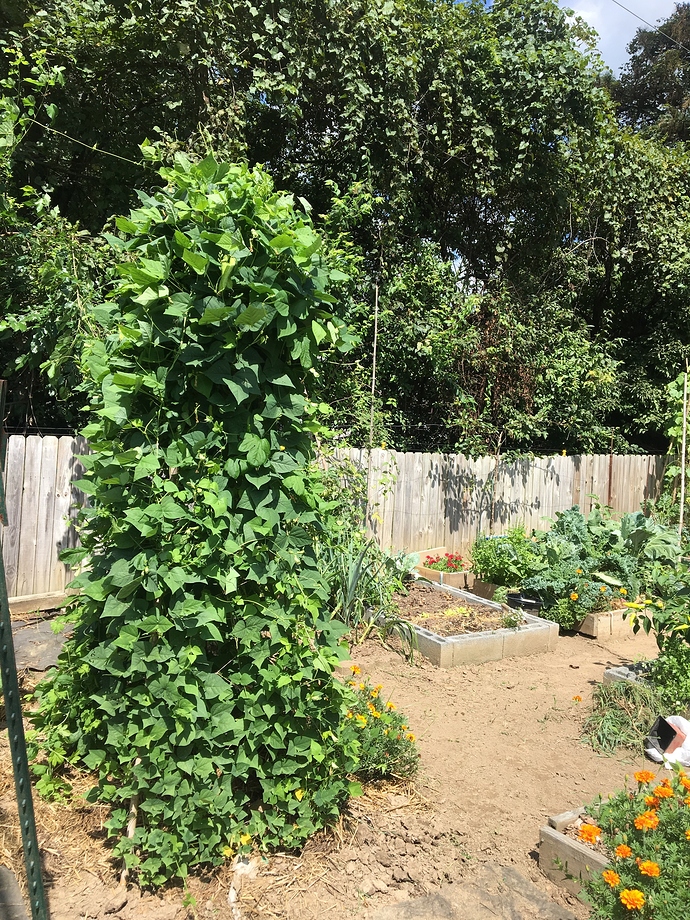 Yes they are very tasty stirfried. Crunchy. Sometimes I just microwave it with a little bit of water when I don’t have much time. Still tasty!

@RichardRoundTree Radicchio can be very tricky. I’ve had my best luck with the modern hybrids. Fiero (an early Treviso type) headed up nicely in 9 out of 10 plants, and all of them got good color.

The nice thing about the tardivo types is they get the signal to form a head and color up in the post-harvest treatment. You dig them, remove most of the leaves down to a core, and bundle them. They will have grown large and gangly and not look very promising. Also, you want a couple of hard frosts to be sure they’ll redden up. They can take down to 20-22ish degrees. The Official Method™ is to bundle them in crates set in flowing water in a springhouse at 50ish degrees, but a 5 gallon bucket with a lid and regular water changes worked for me. Potting them up and forcing them in the dark would probably also work.The outer leaves basically rot away, and the inner leaves grow. Bundling them helps keep the heads compact.
Here’s a video that shows the process pretty well. Mine didn’t get nearly as large or pretty. I actually grew them by accident, since they were mispackaged as a regular Treviso and I planted them too late as a result. Fortunately I was able to figure out what they were and get some of them to blanch nicely.

@Caesar yard long beans are just OK, in my opinion. They’re like giant, heat tolerant green beans, but I like regular green beans better for flavor and texture.

@Hillbillyhort Wasn’t Heartland Chia heat treating all seeds sold so they couldn’t be grown ? Or was that a different company?

I agree about the flavor of the yard long beans, just OK .
Not my favorite .
About heat treatment of the chia seed, don’t know about that.
Hope they work in my chia pet !

Only one way to find out for sure. Good luck!

You can dig up the tubers of these plants and eat those too! @Susu

If I dig up tubers and store it like dahlias overwinter, do you think they’ll produce next year?

Sorry, keep thinking of more favorites:
Again, not super unusual, but pole limas (like these Christmas limas) are great and taste much more interesting than the store bought bush limas. 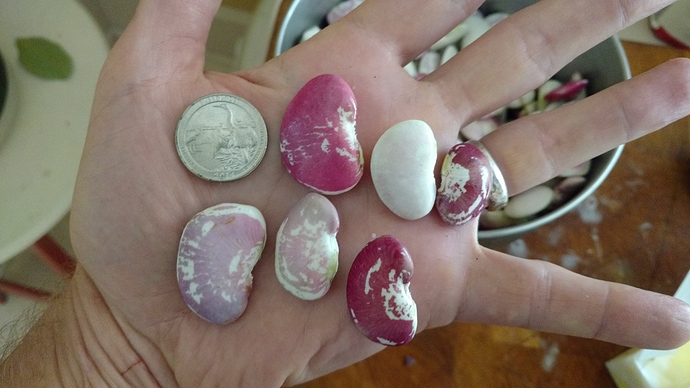 And, not exactly a vegetable, but sesame is fun to grow and one of the most “worth it” small grain type crops I’ve tried. Definitely needs heat. It worked much better for me in Kansas than New Hampshire. 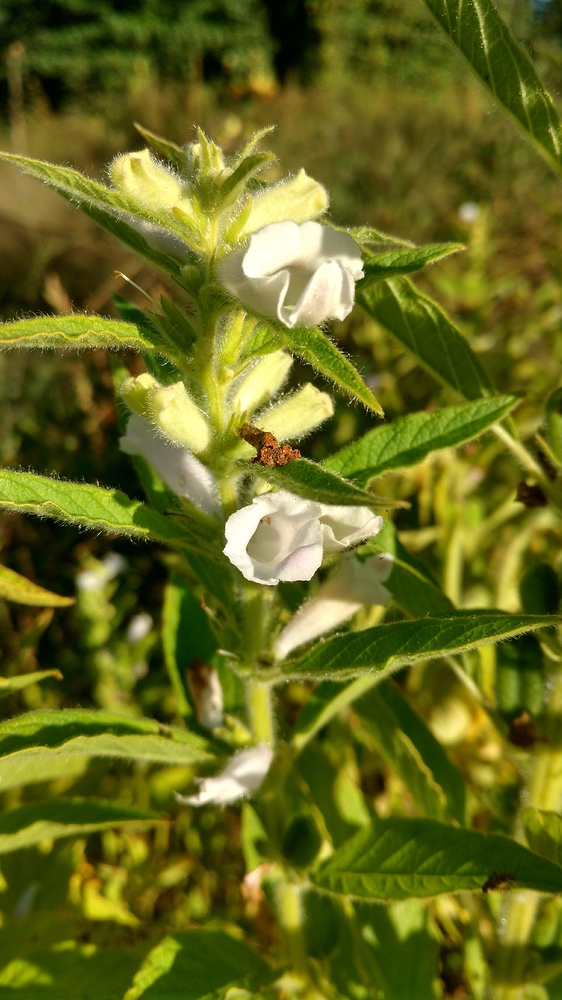 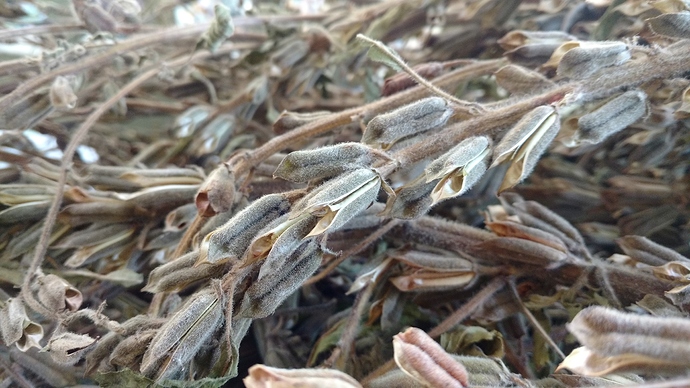 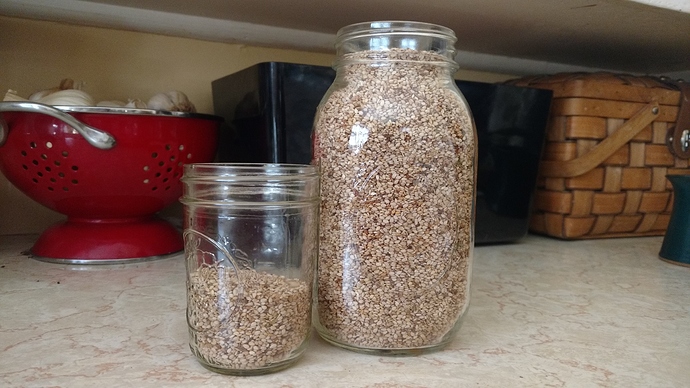 Now, that would be neat! I’ve heard you can do that with some other beans.

Yah . Sesame !
I tried to grow it for years, from different seed sources ,
with little luck.
Then ,Got some from Monticello , it does good here.
Did not grow any this year , so I hope my seed is still good.
Fairly easy ,to grow , harvest by hand, worth the effort. Fun.
Tid bit. “Open sesame” from the nursery rime ,refers to the pod. When it splits open the seed will come out.

@Hillbillyhort is it similar to a mustard pod?

The pods are in the photos of @jcguarneri above .
And they are open " open sesame "
I would harvest befor frost, make shocks, standing the stems upright , with a cover on the shocks. Let dry until they “open”
Then turn up side down in a clean barrel , beating against the side a little , the seed just pours out.
. Easy by hand ! Compared to other grains, easy for the food value … And really good !

It’s like the second picture down in my post above. They open right up and shake out easily. Grew really well for me in Manhattan, KS.

@Hillbillyhort Monticello strain is the way to go! It even set some seed for me here despite a cold and rainy first half of the growing season. I think I may start it ahead in plug trays for next year.