What's wrong with my rhubarb plant?

I planted rhubarb just one week ago and it’s seriously struggling. I gave it some shade during this weekend’s heat wave and check the soil twice daily (it’s still moist just below the mulch layer). Is this some sort of fungal issue? Should I remove a couple of the leaves? 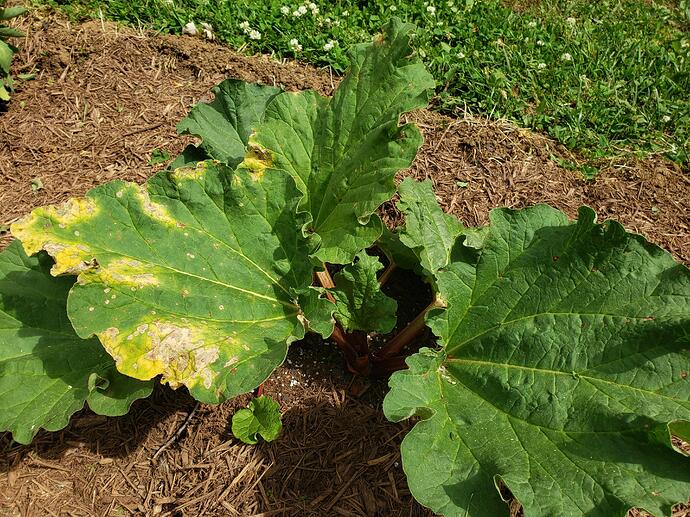 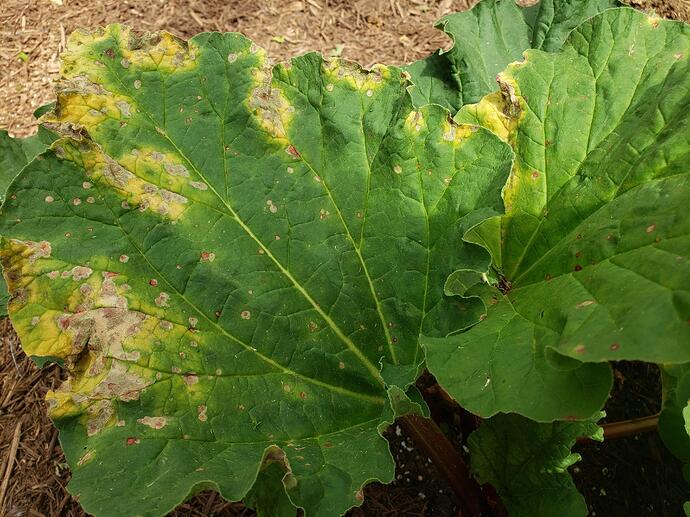 Rhubarb just one week ago: 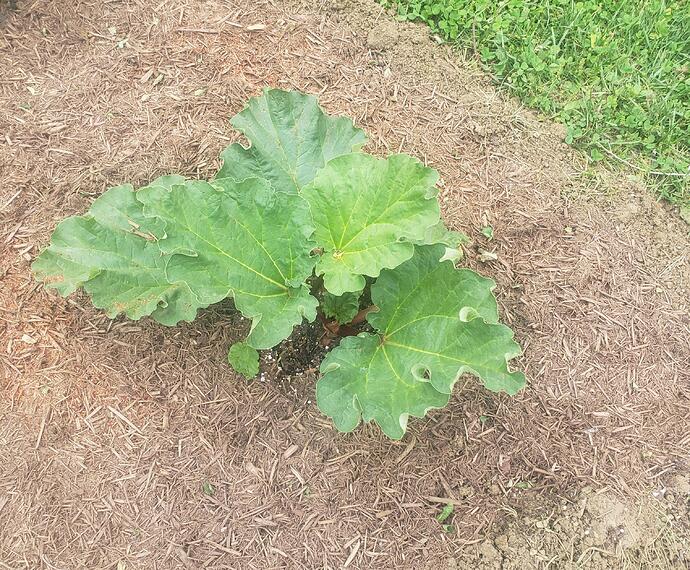 Doesn’t look at all bad, especially for a new transplant. The red lesions are probably ramularia leaf spot—which you also see on wild dock plants. The chlorotic/dead lesions may be something else—possibly ascochyta. I see both on rhubarb here (Kentucky 6b); named red cultivars (Canada Red, etc.) are most affected; green/blushed cultivars less so: my great-grandma’s old green-blushed rhubarb laughs at heat, humidity and fungi. The red ones usually die back severely here by summer’s end, but not before giving a good crop of stalks—and they come back reliably the next spring. Established rhubarb, provided it has good drainage (standing water and root rot are the pie plant’s direst enemies), is just about impossible to kill.

I’d remove/discard the worst affected leaves and petioles and feed the plant with something slow release to encourage establishment. Rhubarb will tolerate poor soils, but prefers a rich diet. Getting rid of dead leaves/petioles (which harbor such diseases) at the end of the season and renewing mulch will help with diseases the following season. Also, with age (and good health) the plant should become more tolerant of pathogens. Remember to feed every spring. I’ve had good luck with Espoma Holly-Tone, neem meal and fish emulsion; rotted manure and/or good compost are also great. (Rhubarb, btw, adores the cheapest fertilizer of all: human urine!) There may still be spots and a few dead leaves—that’s just life and gardening----but that won’t stop you from having a pie.

EDIT: Forgot to say: Welcome to the forum! 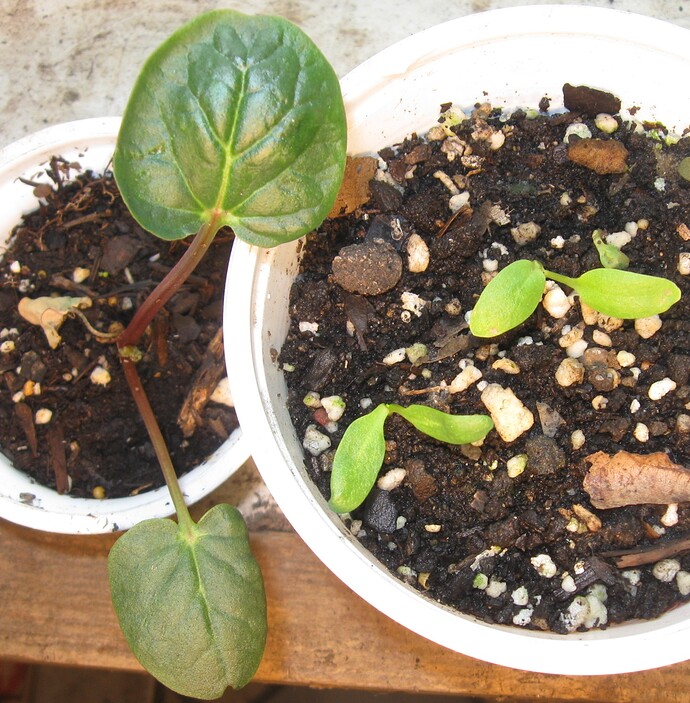 Thank you so so much for your reply! I’m also in Appalachia / 6b so this is super encouraging. I will give your advice a try. Hopefully it will come back stronger next year!

In my limited experience, rhubarb can take a year or two to really find its feet. Once it gets well established, though, look out! It’s pretty bulletproof then, just needs a healthy topdressing of compost.

I would not worry about it. The best way to propagate a rhubarb plant is to run a bulldozer in the area where they are. That ensure that you end up with rhubarb plants all over the place. It will sort itself out. Heck broadleaf herbicide that will kill dandelions will not hurt them.

Welcome to the forum! For me, rhubarb has been pretty care free. This year (3rd in ground) I felt comfortable getting a decent harvest from my plants but leaving a good amount of smaller stalks to grow and shade the root system. These will be harvested later in the year.

How are you propogating your rhubarb?

Once it goes dormant dig up the root, you should be able to see chunks you can take out to pot by themselves.

I kid you not, this thing is what dandelions want to be when they grow up. They are very bit as tenacious and just as quickly to take off from a chunk of root.

This exact thing happened to me after planting mine last year. By summer it looked dead but came back fine this year

Hopefully it will come back stronger next year!

I am very optimistic.

They are—as the consensus here indicates—uncommonly forgiving plants. For example, my mother purchased “Canada Red” and “Crimson Red” crowns a number of years back. They were no great shakes: rather moldy-looking in fact. Being busy with something else at the time, I stuck them in a less-than-ideal spot and neglected them for several years. They would not thrive, but refused to die. I felt bad about their situation: so 2 or 3 years ago, I made them a better spot—a mounded up little bed at the corner of the garden. I transplanted what I could of the crowns—one was such a tiny stunted thing, that I could only find about a large walnut-sized piece of usable crown—and mulched them well with rotted wood chips and commenced feeding them. The first year they didn’t do much. The second, they rallied a little. And now: 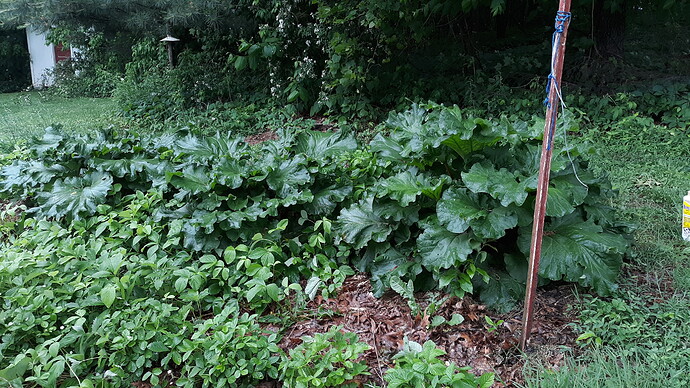 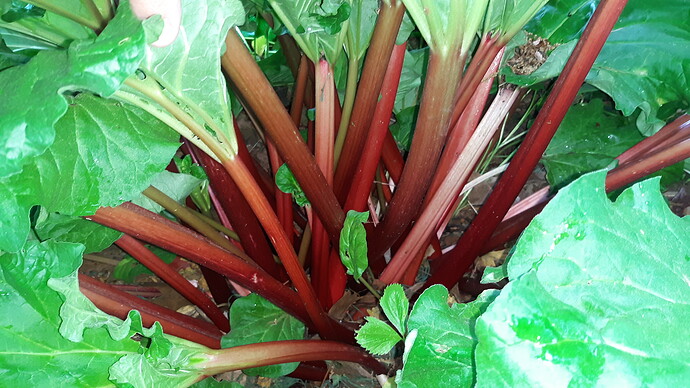 This was the one that barely had any of itself left; it was so tiny I could barely find it among the weeds. The first year post-transplant, it was unable to make a leaf bigger than a silver dollar. Now look at its leaves: 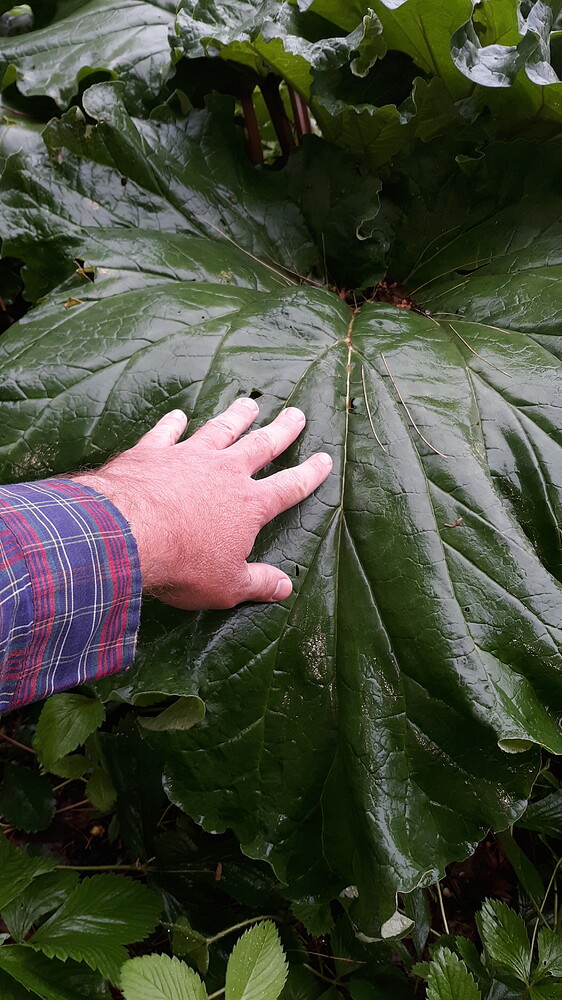 I still get some diseased leaves. This will look familiar to you: 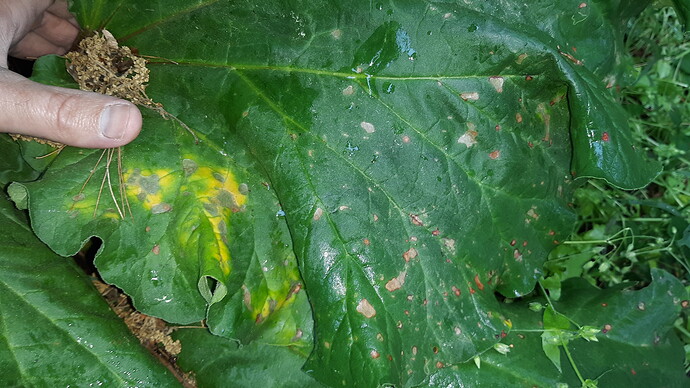 But it really doesn’t amount to much, because the plants are big and established enough to tolerate these maladies and still produce plenty of usable stalks before summer overtakes them.

I just divided my Great-Grandma Conley’s rhubarb this spring—into three chunks. But being rhubarb—and a tough rhubarb at that—it didn’t take much note of the process. Nor is it much bothered by the musk strawberries around it. Each of these divisions will be a giant in a year or two: 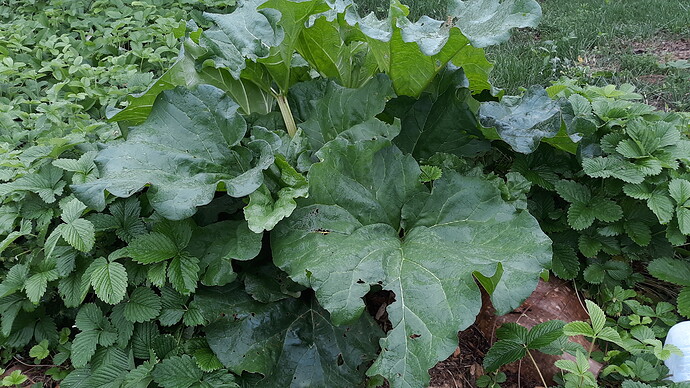 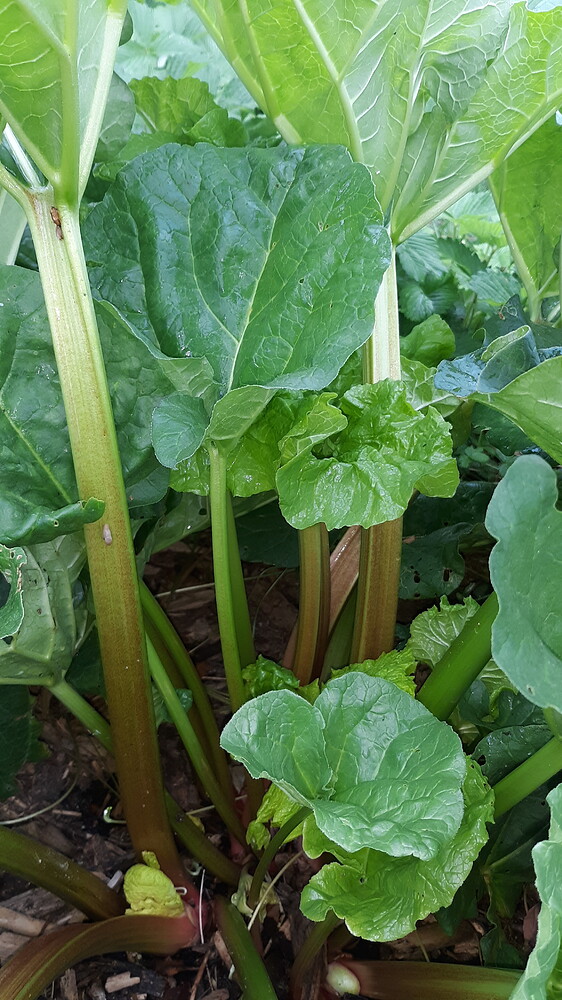 This grew for many years near Little Half Mountain in Magoffin County, Kentucky. It may not have the color of the fancy reds, but it will stand toe-to-toe with any in terms of texture and flavor. Like a lot of these old-time rhubarbs, it will bolt more than the named reds, but the flower stalks are easily removed.

To me, watching rhubarb reappear and unfold itself is one of the joys of spring.

My rhubarb bolts as soon as it pushes leaves. I have 2 leaves and a flower stalk and it did the same thing last year.

I cut the flower off, it was a bud as large as a baseball last year, and it seemed to set the plant back much of the rest of the season.

It does, and that’s what you do; you cut the flower stalk as soon as it pops up. I let one go to flower because my daughter wanted to see it and it did the same thing, pretty much arrest the plant growth for the rest of the season.

As Don said, the sooner you pinch out the incipient flower the better; making that big flower head takes a lot of energy out of the plant—and could conceivably affect it the following season, too. Maybe also try increasing the plant’s nitrogen intake; that will often encourage vegetative growth in rhubarb. Are there any stress factors that might be encouraging premature bolting?

Of course, some rhubarbs are just bad bolters. The popular old variety “Victoria” can be an awful bolter—and some individual specimens are worse than others, because it’s often seed-propagated. I’ve got some older Victorias (and a couple of unknowns that may be volunteer seedlings) that’ll bolt if you look at them crosseyed. Just moved/divided them this spring. I’m going to see if division and a better location/diet will improve matters a little. So far I’ve pinched out one flower from them this season.

Modern cultivars such as “Crimson Red,” “Canada Red,” “Valentine” are bred to resist bolting. Gurney’s has one they call “KangaRhu” (because it was bred from Australian rhubarb seed) that’s supposed to be bolt and heat resistant.

@Poncirusguy If it were me, I’d go ahead and transfer that little guy on the left of your picture to a good, well-drained permanent bed—with a little afternoon shade, if possible—, and give him a good mulching/feeding. The sooner it can get its roots down into the earth and start building root mass, the better. Is it a seedling, too?

I have a KangaRhu that I planted last year, and it’s following my usual rhubarb establishment pattern so far. Not much growth last year, and better this year but not great still. It also started to bolt; I think it was bred out of selections from Victoria seedlings. The no-name family heirloom next to it is going gangbusters. I may have to move KangaRhu to a different spot, as the heirloom rhubarb has come into its own enough now that it will shade out poor kanga if I’m not paying attention. I think kanga is also having trouble because Gurney’s sent a runty tissue culture plant that could have used a few more weeks in the greenhouse before it had to face the elements and my benign neglect.

The no-name family heirloom next to it is going gangbusters.

Those are so often the best ones; and they were handed down for that very reason. And I bet KangaRhu won’t make a pie that’s a whit better—and maybe not as good. But Kanga could well come out of it. My former half-dead runt (it’s either Crimson Red or Canada Red—does anyone here know how to tell the difference?) languished for a couple of years before deciding to do much of anything. It didn’t even try to bolt. It just sat there looking like it was going to croak. Finally, it decided that it would become a respectable rhubarb.

If all else fails, give it the pee treatment. Seriously! Rhubarb responds well to it.

Yeah, the heirloom one is pretty good, but my chief complaint is that the stalks aren’t as red as I would like and can be a bit on the tough side. Kanga is supposed to be extra red and nicely tender, which I found attractive. The heirloom also has a 2-year head start on Kanga, and this is the first year it’s done really well at this site. 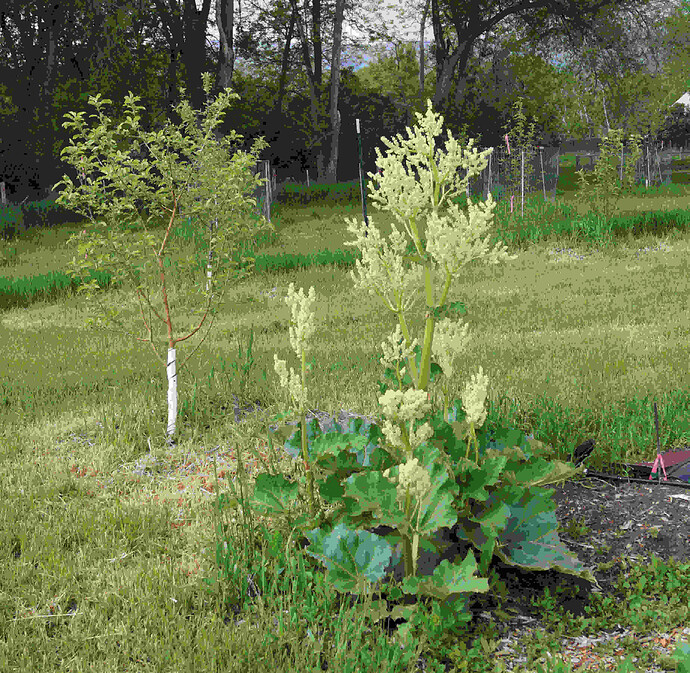 image3672×3583 603 KB
Talk about bolting - the Chenago Strawberry apple tree was about three years old, and the rhubarb was probably in the second year. I was curious how big the flowers could get. Not sure why you would, but has anyone grown rhubarb from seed?
3 Likes
poncirusguy May 25, 2022, 3:45am #19

It is seed grown and is to small for in ground yet. Insects mice possums ground hogs will eat it.

Not sure why you would, but has anyone grown rhubarb from seed?

I’ve thought about it, and @Poncirusguy—and many others—have done it. Of course, that’s how breeding work gets done with rhubarb. Gurneys, for instance, claims to have selected “KangaRhu” from Australian seed stock—which they chose for its heat tolerance. Some varieties—e.g., “Victoria”----will produce seedlings that are generally more or less true to type, though you’ll still need to rogue out those with off or undesirable characteristics. “Glaskins Perpetual” is supposed to produce usable stalks very quickly from seed. The Southern Exposure Seed Exchange offers this reason for seed-propagating rhubarb: “if you want to start a large rhubarb patch quickly, without spending a lot, growing rhubarb from seed is the answer.” But I disagree with their assertion that “they will all taste the same.” Rhubarb can vary markedly in flavor—and certainly acidity—and also texture; some rhubarbs will be crisper and more tender, others more tough and fibrous.

Another reason for cheaply mass propagating rhubarb from seed: for use as a living or “chop and drop” mulch in a permacultural context.

Blooming rhubarb, though the individual flowers are insignificant, is actually kind of pretty. That’s an impressive specimen in your picture!