When do gooseberries leaf out?

Last year I got a Poorman gooseberry and a Jostaberry free from Raintree with my order. I know hot humid SC is not gooseberry territory but for free I am giving it a try. The jostaberry long ago leafed out and has lots of little berries on it but the gooseberry is just now trying it break dormancy. Is this normal or low chill problem. I got more chill this year than I ever want to see again but if it was not enough I would just like to remove it now and stop wasting my time.

It could be from not having enough chill, but new plants need time to adapt, give it another season.

I planted a Poorman last May and it is just leafing out now. But to put things in perspective, I’m in Zone 3 at 54 degrees North latitude – our grass is just greening up now and leaves are just starting to come out on some of the earliest trees like Maydays and Schubert chokecherries. It’ll be at least a week before most trees leaf out here, and a month before the apple trees bloom. So your gooseberry is definitely very late.

My gooseberries are one of the first plants to leaf out. They have small leaves at the moment.

On the far right of this pic is a Poorman gooseberry (to the right of 3 currants, black, red, black) from earlier today. 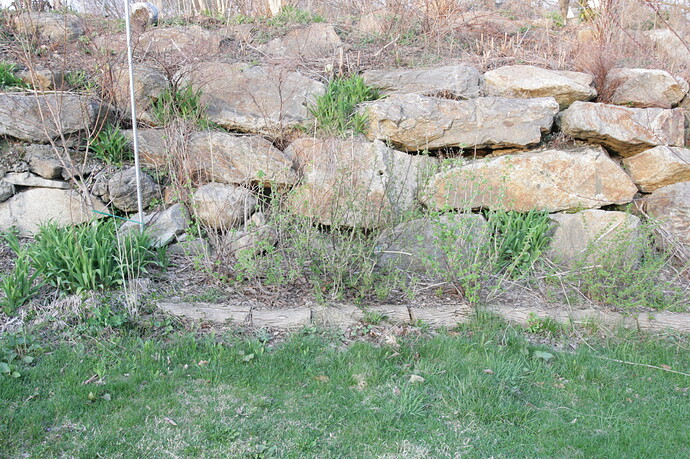 To give you an idea where the rest of the yard is with something you may have, here is a pic of a Satsuma plum from earlier today. 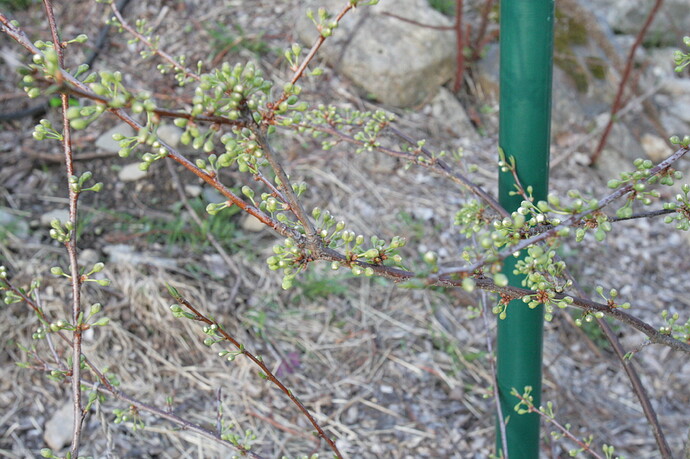 I’m jealous about your Jostaberry. Please keep us posted about the progress!

I’m jealous about your Jostaberry.

With all the delicious stone fruit you are growing in CA, I don’t think you should be jealous about the Jostaberry. Around 8-10 years ago, I picked some at a PYO and it was horrible. It had all the sourness of the red currant and some of the musky (bad) flavor from a black currant. It was the first time I couldn’t finish what I picked- and nobody from work could stomach them either. Maybe they would have made good jam, as black currants make my absolute favorite.

I’m in Portland, Oregon. My two gooseberries leafed out a long time ago. The Hinamaki Yellow was before the Amish Red. Both were planted one year ago. Both seem to be pretty loaded with berries. I think they are more of a cool weather plant and doubt they will grow well in SC. They thrive in Northern Europe and the UK. Good luck though.

And yet there are native gooseberry species and cultivars that won’t ripen in areas of southern California for a month or more.

I’m in Z6 and my currants have been pushing green for a while and have leaves now. I don’t have GB’s here but they grow at the same time.

When fully ripe Jostaberrys are palatable, like crisp, tart grapes. Not too bad for such an early fruit. I don’t like any gooseberry well enough to give them space, though, and stick with black currants for their superior (IMO) culinary value.

You may mean Jostaberry here. I’m growing Invicta and it is a green gooseberry which is far larger than most currants. Mine is in a bad location (for gooseberries) in that it is on a sunny and dry hill, so I haven’t seen much growth. But it did have a pretty big crop last year before the gooseberry sawfly defoliated it. The berries got large, but never had a chance to ripen, so I don’t know how it tastes. They were a bit scary looking with small thorny protrusions from the berries.

When fully ripe Jostaberrys are palatable, like crisp, tart grapes.

Mine must not have been fully ripe. They were dark, but maybe they needed to hang longer. I actually find some gooseberries pretty tasty. Hinnomaki Yellow and Red (Yellow is a bit better but a weak grower), Jeanne, and Poorman are all a pleasure to eat fresh.

I may eventually pull out the red and white currants, but black currants and gooseberries are here to stay (assuming I whip the sawfly issue). They just have very different uses, so I’m skeptical about a cross.

I myself love red currants over all of them, mixed with mulberries or blackberries it makes the best jam ever. I think the flavor of reds is a good as strawberries or raspberries. I’ll take your plants! send them to me

I don’t eat them fresh. Well a few, I really like the flavor, one of my all time favorite fruits. I like the blacks too, but to me red is far superior in taste. But everybody is different.
When I say taste I mean in a jam or as a syrup, not raw. The most expensive jelly in the world is white currant That is a 3 ounce jar!! Food of the Gods!
http://chefshop.com/White-Currants-in-Syrup-France-P6478.aspx

This product sells out quickly and usually is impossible to find.

Reds and whites make great scones, and fruit bars, fruit leather too. So much you can do with them, or any berry. Coconut is to die for with red currants. makes the best smoothy one can imagine.

Thanks for the replies, I will just keep it for now but I am also realistic and not expecting much.

Bob, here are some pictures for comparison. My gooseberry is about like yours. 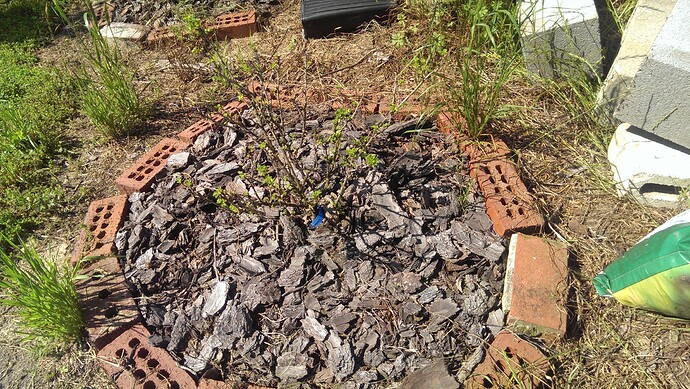 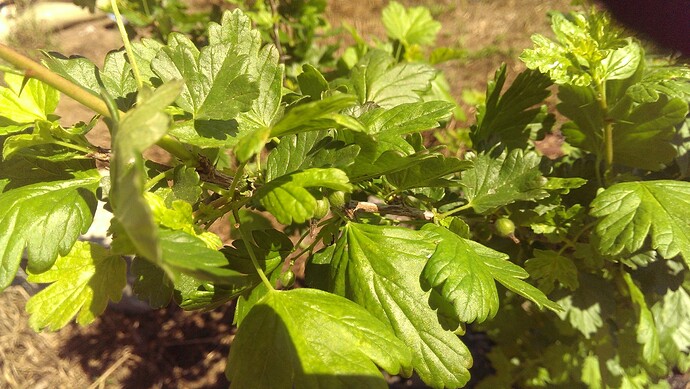 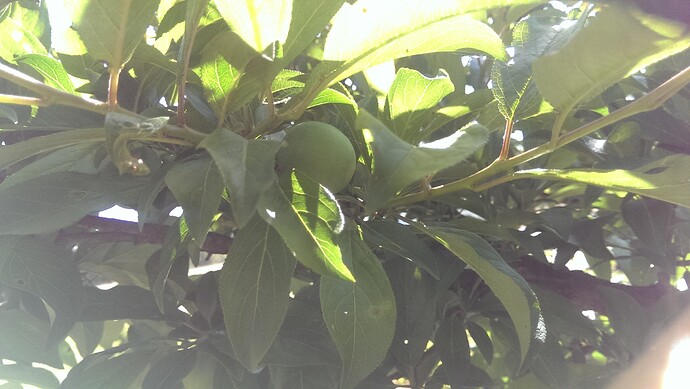 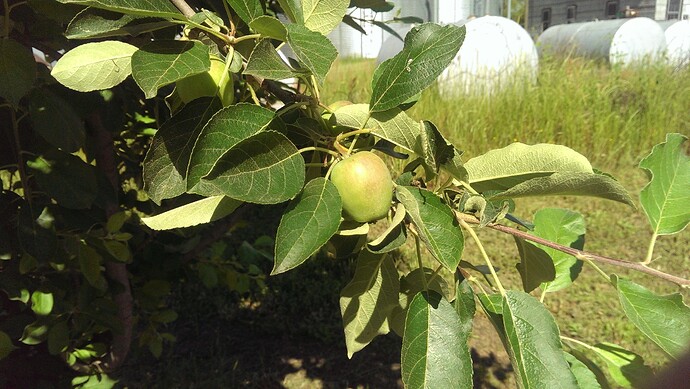 I don’t think you should be jealous about the Jostaberry.

Yes, everything I have read about them leads me to believe there was a reason they were giving them away for free.

Sorry, I was speaking from memory about Invicta. I should have said Orus 8 as my disease resistant and highly productive, small purple fruited currant, goosberry cross. Invicta was my other gooseberry staple in my nursery when I sold these things. Neither of these tended to get mildew which cripples gooseberries in my northeastern climate. Most euro varieties can’t be grown productively here without serious mildew control efforts.

Orus 8 has smaller fruit that tastes pretty much gooseberry.

To harvest gooseberries on my prop I have to exclude chipmunks, which I could do, but I don’t love gooseberries enough to bother.

I just transplanted a first year Pixwell gooseberry planted last fall. No top growth yet, but some new shoots are pushing up from the base area.

I have 4 gooseberry trees and they starting to form fruits now. 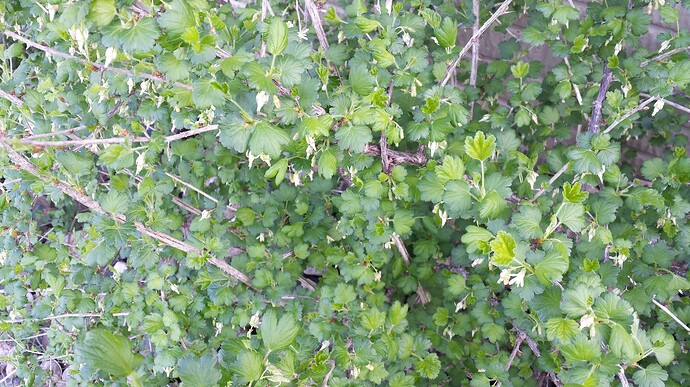 My jostaberry is also Orus 8.

Tony how do your gooseberries handle the summer heat?

I planted them 2 feet from the North side of my house. They got only 6 hrs of sun lights and doing fine. Heat was not a problem since they got minimal sun exposure.

The one thing so far that I’m having issue with concerning the Jostaberry,is how big(wide)the plant gets,compared to the small amount of fruit that are produced.I’ve read that they take awhile to start putting out.I planted one about three years ago and probably haven’t harvested more than half a cup.There are more berries this time around and I’ll probably wait one more year to see. Brady

I’m in Z9 and my Captivator and Poorman are just beginning to break dormancy.
For comparison, I have some stone fruit that is nearly fully colored.