When to pick Gold Rush Apple

So I have a couple of Gold Rush trees, which have suffered some setbacks over the last few years. One is still regrowing after a deer attack a few years ago.The other has grown well the last couple of years and actually fruited and has 10 or so apples on it. Problem I am running into is I have no clue when to pick these nor how to deal with them after they are picked.

I suspect that Gold Rush is probably too long a season apple for here many years. But I would like to pick these few apples and treat them right and sample them. I have watched them turn from mostly green to mostly a yellow-brownish color. Not sure if that indicates ripeness, but the flesh is still hard, with no give to it. They could hang on the tree some more, as the weather is not all that cold yet. I suppose I could cut one open and check the seeds, but with so few I’d rather find some other indicator of ripeness.

Can anyone tell me how to tell when to pick Gold Rush. And what to do with them afterwards (I seem to recall that they might want to be held in storage before eating a while for best flavor).

People are just starting to pick Goldrush here in 7B this week or next. I asked Scott same question and he said wait until a gentle lift causes stem to break off. Some people wait for a a bit of red to show up. I had some last year that were picked too soon and they did not hold a candle to properly ripened GR.

I picked mine last week in zone 8a.

Don’t go by any color on the top - red on the top means it was in the sun, not that it is ripe. Look on the bottom of the apple only for the ripeness condition as that is the last spot to turn yellow. If you want them for optimal storage, pick when the green is almost gone on the bottom and there is no green coloring elsewhere. If you want them for optimal flavor pick when the bottom is all (light) yellow, no sign of green at all. At least that is my rough guide. I picked a few this weekend and they were in the storage category so I am going to wait a couple more weeks to start picking I expect.

They are allowing them to be picked at the PYO we go to here in N KY, zone 6b. We’re planning on picking some up this week. All their apples have been about 2 weeks ahead of schedule, because of a very dry, warm and sunny August and September.

I’ve revived this thread since Gold Rush has continued to be a popular apple among us. I grow this variety in zone 6 a.

Last year was my first GR production. At that time, I picked them in when temp was 24 F. They were mostly yellow and the tree had lot of leaves. The apples tasted good and kept until April.

This year, we have had lot of rain for the last 4 months. Leaves developed some fungal issue. Most leaves dropped by mid Oct when the apples were quite green. I let them hung through several days/nights of temp below 30 with a couple nights at 24 F. I decided to picked them all yesterday. Most still had more green than yellow.

I could not remember who said his GR cracked a lot with plenty of rain. Was that @blueberrythrill? Anyway, at that time I thought mine did not cracked. After the harvest, I realized that a lot of them cracked at the bottom (that’s why it was hard to see as they were bagged)

I’d like to apologize to that person. As it turned out, 1/3 of my GR have various degrees of cracking. All those that cracked sustained some winter damage. Their skin became bumpy and squishy, not smooth and hard like the undamaged ones.

Lesson learned:
In colder zones, there will be years when GR does not ripen enough to reach its full flavor
Summer spray of fungicide may be needed to protect leaves
Cracked or damage apples are more susceptible to freeze damage 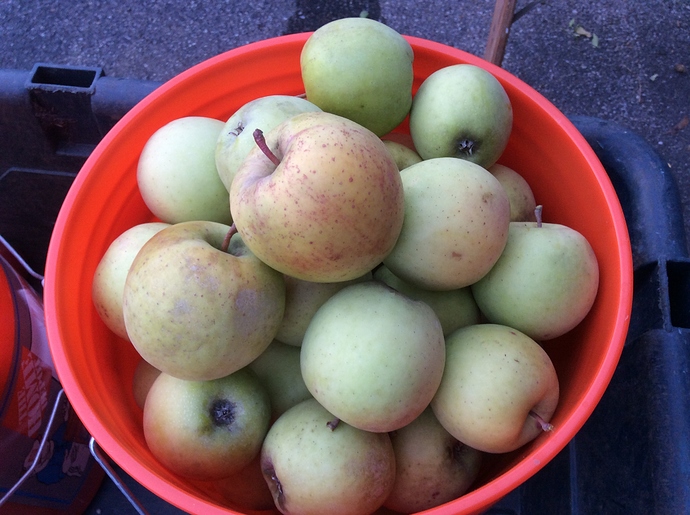 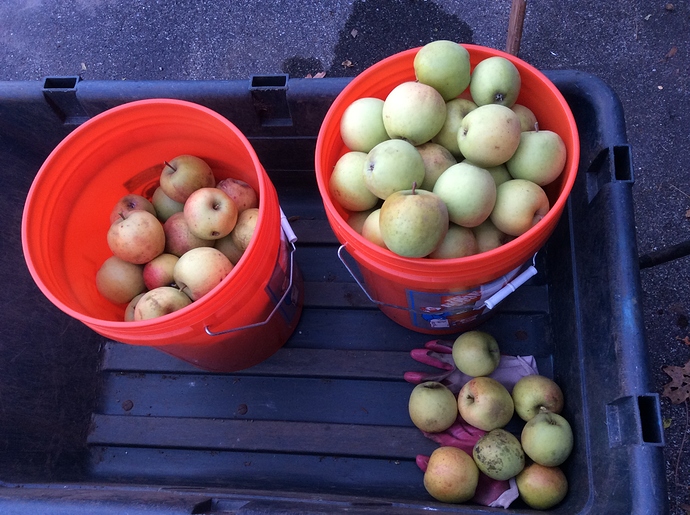 The bucket that is full are good GR. The other is the freeze damaged ones.

I should have read the Purdue research report a little closer before I planted a bunch of Goldrush trees. Looks like cracking on Goldrush may be a common problem. I have experienced it the last two years, but I had a huge amount of rain each year.

“One drawback however is its tendency to russet and subsequent cracking. Dick Unrath, Mountain Horticultural Crops Research and Extension Center, Fletcher, NC, says he’s currently testing ProVide (gibberellic acid, Abbott Labs) for the russeting and speculates that it will help prevent cracking, too.”

I’ve never had cracking problems. This year the tree defoliated and the apples didn’t ripen well at all. The deer and squirrels ended up getting nearly all and I really didn’t care this time because they were no good.

I’m getting a new GoldRush on P.18 in a few weeks from Cummins. As long as my deer don’t sprout wings I’m gonna beat 'em out!

I’d like to follow this thread to see how late harvest was for others.
I’m in a somewhat similar location as Steve. Late rain is never a problem here. However, early freezing is. We dropped down to a low of 15 on Oct 15 which pretty much killed everything. Any apples not picked would most likely be damaged. I have a GR, but no fruit just yet. The reason why I planted it despite it’s long growing season is that I’m hopeful given the climate where I live (lots of sunshine and little cloud cover) could theoretically speed up ripening. Unfortunately, there isn’t much information about GR when grown here so we’ll see how things go in reality.

I don’t know how you Colorado people do it with the deep freezes so early (and late!)

I picked mine almost a month ago, completely green. For some reason they started to fall from the tree, the seeds were already brown. I had only half bucket, so really didn’t want them to be damaged by fall. They where very hard, green, but falling easily. May be because the tree lost almost all the leaves this year in September.
I refrigerated them and will try in a month or so…

I pulled one of my supposed GRs this year. It was supposed to be on M111 but stayed a dwarf size, but the real reason for its going was it never ripened apples. They were always sort of a brown-grey color, never turned yellow as GR is supposed to. Don’t know if it was just entirely wrong varieties (root and top), or if this is an indication that GR can’t ripen in my location. I do have another GR on M111; Should be getting to the fruiting stage hopefully next year, so I will see.

Good luck next year. My GR is on either m106 or m7 and is growing fairly vigorously. An elk chopped the top so the tree may be set back a bit. However, I think I’ll get some fruit next year and will give an update next fall.

Mine did not fell early at all. I figure GR should be able to handle 24 F so I let them hang this long. Picked on 11/12/18. I could have let them hang longer but we expected crappy, cold weather for a few days, the tree had practically no leaves left and I got tired of witnessing squirrels stealing some everyday.

Although they don’t taste as good as last year’s. I hope that by Jan/Feb/March, they may taste mighty good when I have no other home grown fruit to eat then.

One more thing @Auburn and @hambone,

I did two spray of Immunox before I bagged. Although we had so much wet weather for a long time, my GR in bags had minimal sooty blotch and fly speck. The worst one you can see was the one outside the buckets in the lower right corner. The rest are clean to very clean.

My young Gold Rush tree (grafted in 2018) has around 5 apples. Maybe I shouldn’t have let it fruit so heavily. But I could not resist.
The fruits are nice and large but still look green. The leaves are also green.

The tree is in a pot so I moved it into a greenhouse that stays decently warm during the day. Can I leave the apples on as long as it takes to start coloring up? I dont want to make the mistake of picking them too early.

I’m not any huge expert but I picked the last non-golden bushel of GR from my Z7 tree last night ahead of a forecast low of 22 degrees. They made it through a 25-26 degree night already and about 1/3 were a nice yellow so I didn’t want to push it. I’d much rather pick them a week or two early than lose them all in one night. Everything I’ve read suggests that too-cold is somewhere in the 20-25 degree range.

Mine are really gigantic this year. Closer in size to a softball than a baseball.

Thanks. Our temperatures are still forecasted to be well above freezing until atleast end of this month. I will leave them on the tree as long as possible.

Yeah if you aren’t at freezing I’d leave them outside as long as possible. At least until overnight temps are in the mid 20’s.

@PatapscoMike I like the tart/sweet combo taste in GR. Do you still taste tartness when you pick it in Mid November? Or is tartness gone by then?