When to take propagate blackberry cuttings?

Can I root cuttings taken from end of season blackberries this time of year? I was thinking of cutting my PAF down to ground level and was wondering if parts of the primocanes can be placed in small pots of potting mix to propagate new plants?

Yes blackberry cuttings are easy to propagate on a heat mat with grow light. You need to use something over the plants to control humidity or a mister to keep them damp. I would use clonex ( my preference) or dip and grow or another rooting powder or gel. See this thread http://www.growingfruit.org/t/cutting-propagation-misters-dripworks-com/13336. I’ve never cloned prime ark because they are patented and the plants are fairly inexpensive when buying bulk from Pense. You might look at this thread http://www.growingfruit.org/t/extending-the-blackberry-season/10533. This video is not exactly what I would do but it will work for sure https://m.youtube.com/watch?v=-ttkMuNxjiA . If you don’t want to use a mister use a jar turned over the top which works better inside because water does not go everywhere https://m.youtube.com/watch?v=2bk92W81uSs. Typically if you use a jar your take rate will be less. Some people hybridize the methods and use a jar they lift up several times a day and spray the cuttings with a mist from an old spray bottle. This will give you an idea what to expect https://m.youtube.com/watch?v=LQEfbwFkvpk.

Which way is up ?
When tip layering thornless blackberrys they root at the very tip
Wich is kind of up side down

To start these as cuttings which way is up ?
Who has done this ?

I start plants by cuttings ok ,and tip layer berrys.
But have not rooted thornless black berry cuttings

So which way is up, …"or maybe sideways ?

They should grow in the same direction they grew in nature which is why the people who clone them cut the bottom at a 45 degree angle so they know which way is up. They cut the top straight across.

However in "nature"they root at the tip.
That is upside down.

Who has rooted thornless blackberry stem cuttings?
Which way is up?

However in "nature"they root at the tip.

That is upside down.

True but that is the natural way. The tip is pointed down but the new canes will grow upright.

Roots form at the buds on the cuttings,some of them growing " up" out of the soil. So I am still not really shur wich way is “up” ,
But this will keep me occupied .

This article talks about doing cuttings in November ,December , January
Look like something to do Now. Winter propagation in low light.

The stem of the cutting is the part that is placed in the rooting media.

the people who clone them cut the bottom at a 45 degree angle so they know which way is up. They cut the top straight across.

Wow, in the fig world, it’s the exact opposite! The top bud should be on the high end. This is also general advice when pruning to cut like this so water flows off the freshly cut stem, away from the bud.

Drew,
I’m not sure I understand why it matters to much because if you cut the bottom at a 45 or top either way your roots come from the nodes you have below the soil line and leaves come from those above the soil line. So the deeper the pot the more nodes and the greater your odds for one node rooting. The angle of cuts at the nurseries when I’ve watched them I understood to always just be a way of marking bottom from top. The 45 went on the bottom only to mark it as bottom. When I receive scions they are frequently the same way I suppose because that is the way we graft. Perhaps it’s not the best way and something many of us do because it’s what we do when we graft. If you watch the video you will note he cuts his just the same as I do mine and as I’ve seen many do theirs. Explain a little more about your process if you would. I always figure I try and get at least 2 or more nodes below the soil line and 2 or more above and that’s reasonably good form but 3 is better. With pruning I tip my branches just past the buds straight across. Now I don’t do that type of pruning much but apples need invigorated at times. I find myself doing it frequently ( every other year) with honeycrisp. You can see my tipping pruning method here Tipping to make a bushy more productive fruit tree

@Hillbillyhort,
Back to the original rooting question again it does not matter if it’s thornless or thorny blackberries or raspberries they are rooted the same. Let’s look at what nature does first so we are clear. This picture shows a bud clearly growing up and leaves growing up. 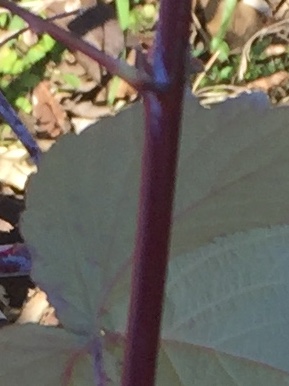 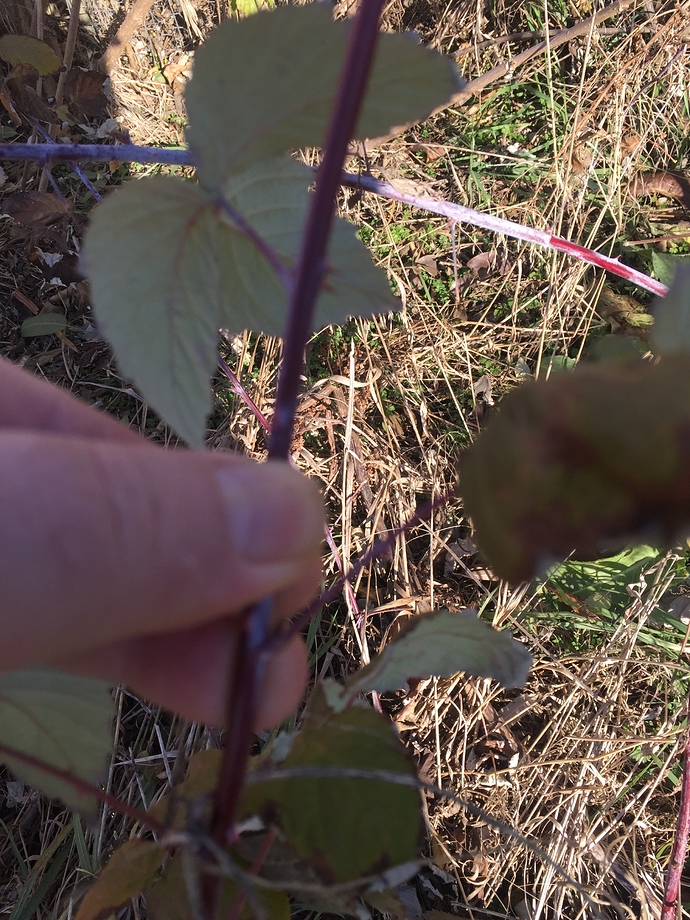 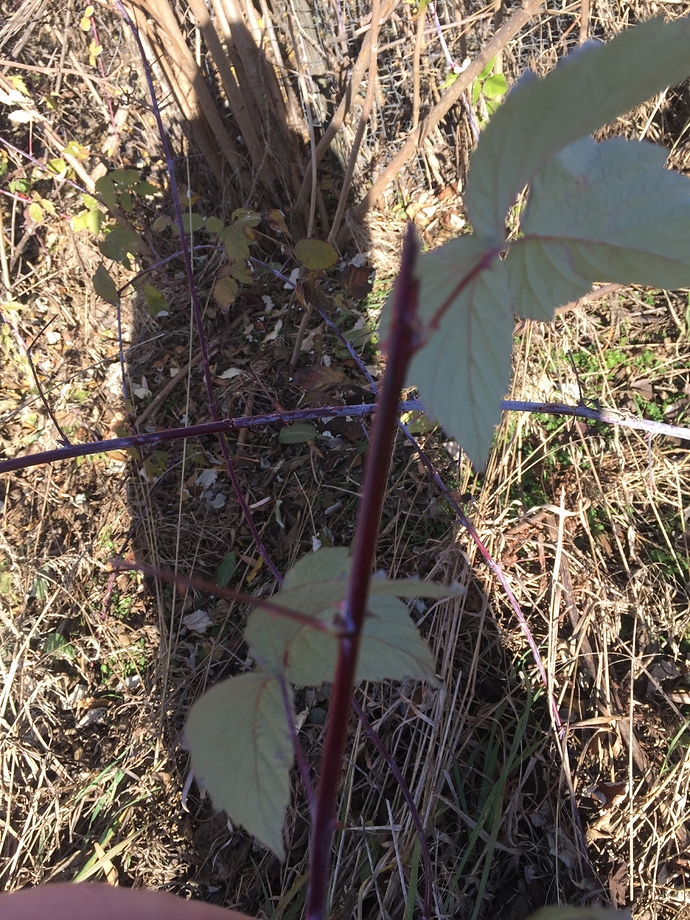 F51BE126-7891-4ACE-9CB5-3CC2170E19542448×3264 3.1 MB
Back to your question about rooting which is a little less clear because to your point when the tips touch the ground they root which means a bud or two are upside down which is true because the tip falls over and touches the ground and the buds send out roots. My point which I’m not doing a great job of making is it does not matter on the buds they will root but it does matter that the leaf side of the cutting has buds headed the write direction because for the leaves it matters. If I need to prove it to you more let me know I have thornless blackberries that are rooting naturally but they are a half mile away at my pond. I have been there and done this many years ago. I’m showing you with black raspberries in these photos. The tips grow up and out and fall over and down where they root. When they grow back up if you look carefully they are headed the write direction again. 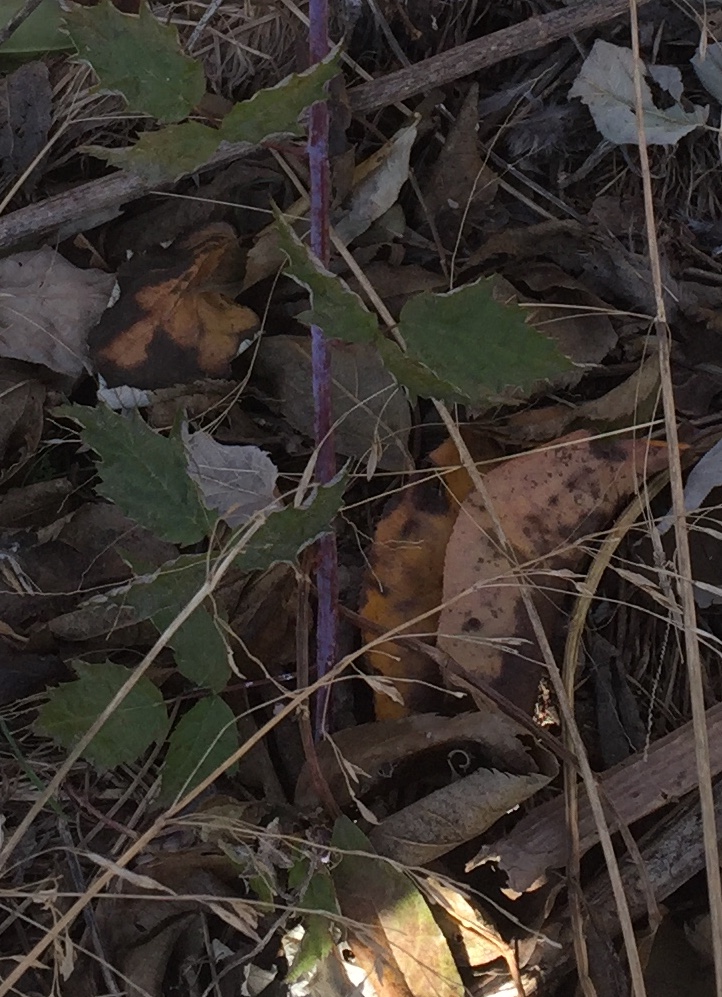 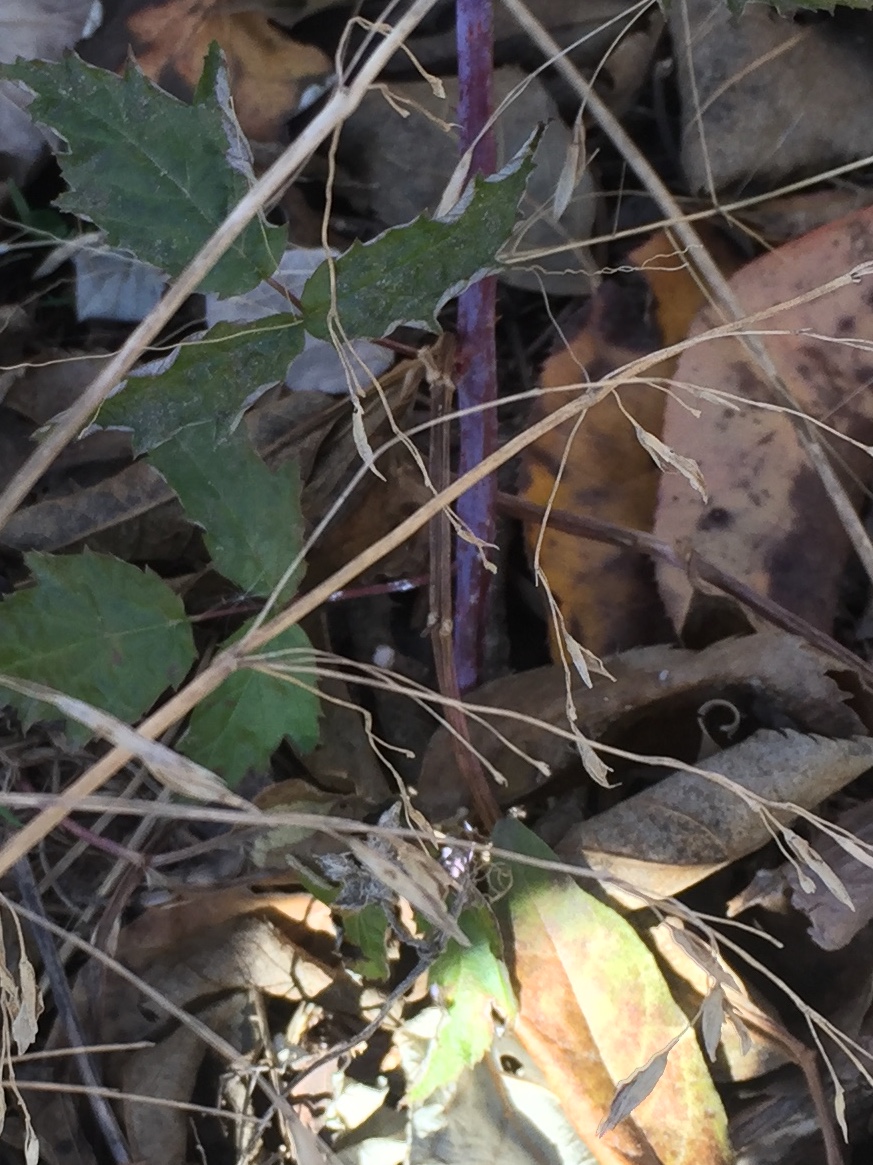 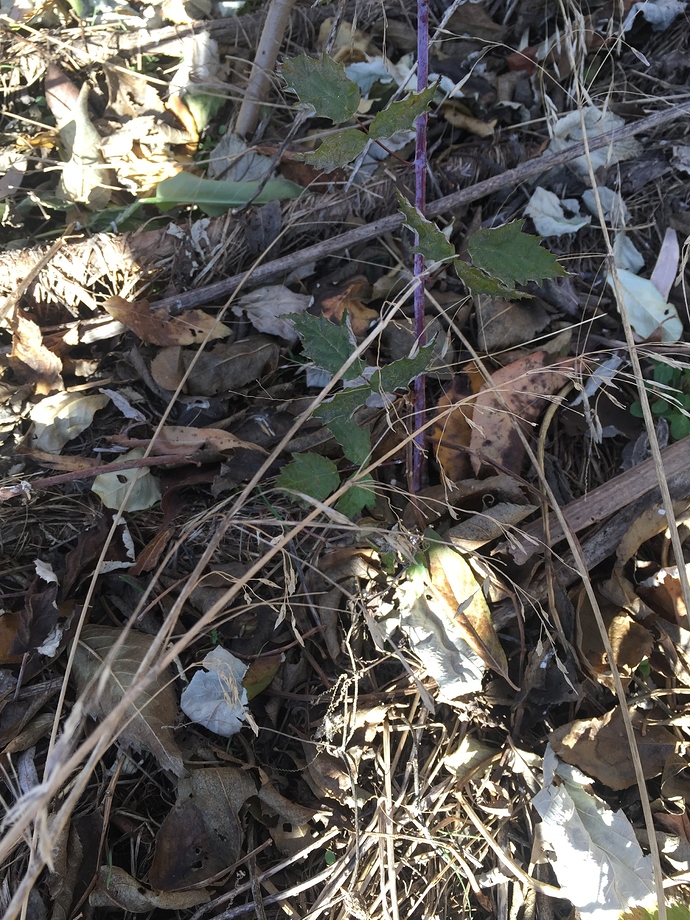 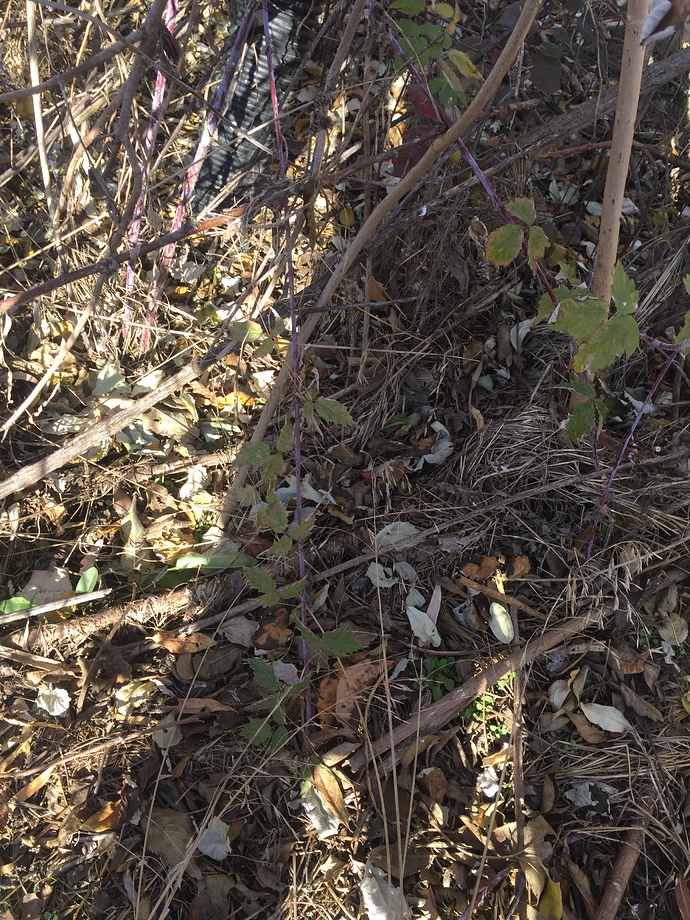 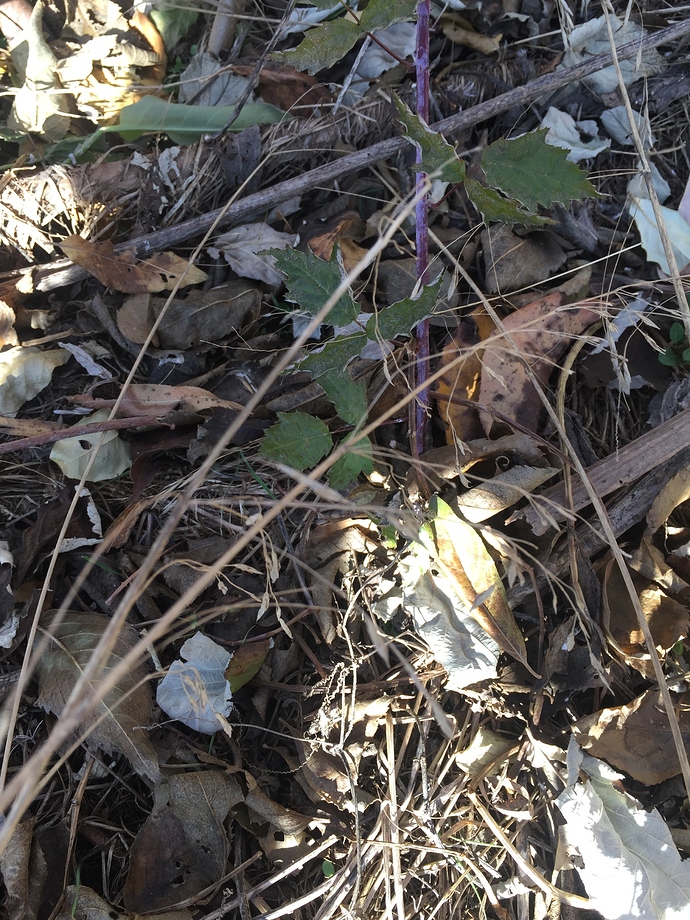 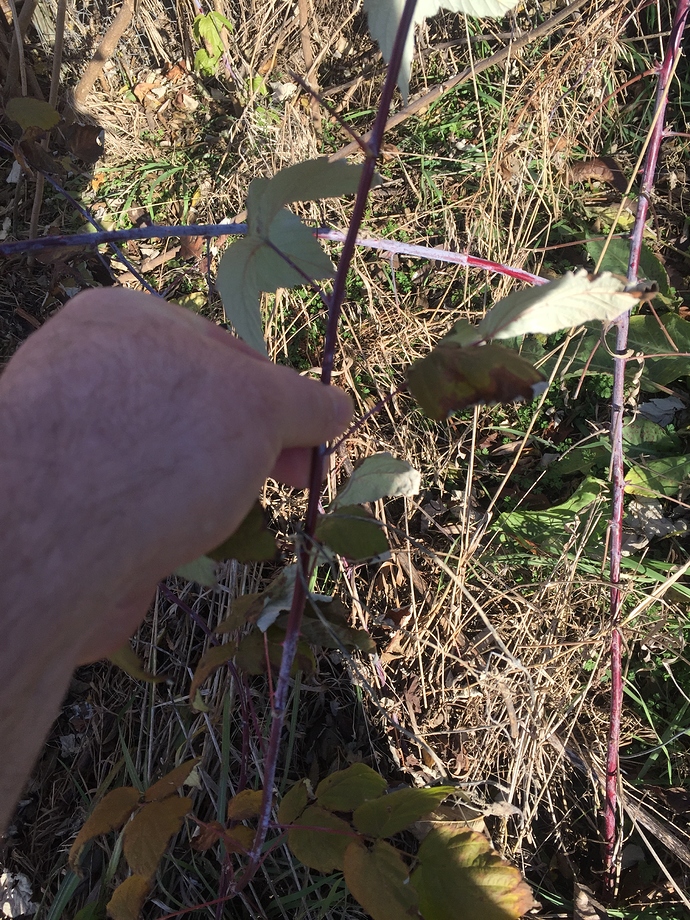 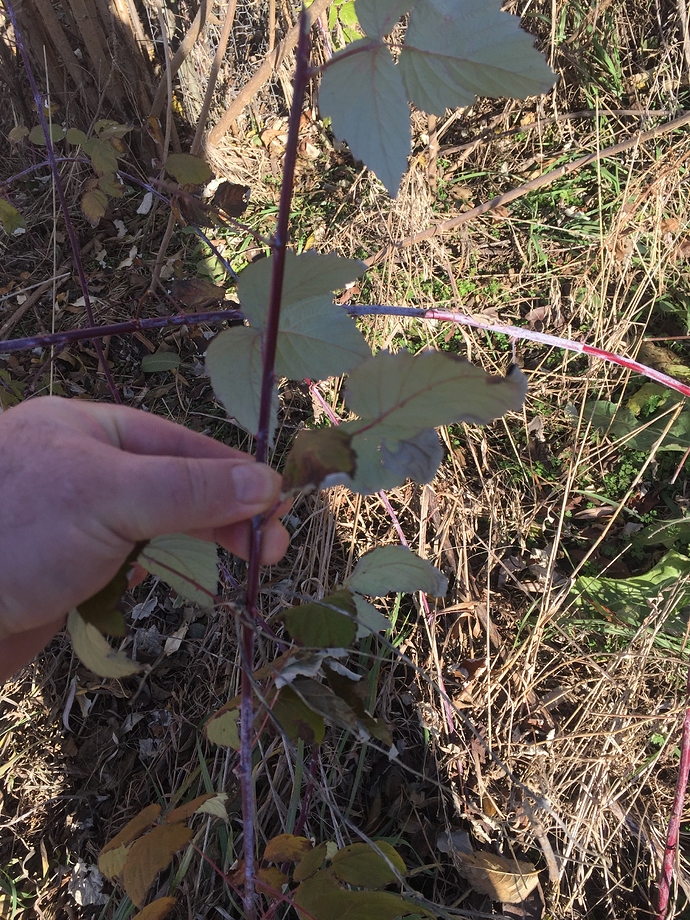 440A91D5-970F-4B99-B71E-3221EAF9909C2448×3264 3.63 MB
Now to your earlier point which is the direction of the buds clearly above ground there is a write and wrong way so the buds must be headed up. The point which you made that I think is fascinating is what about the buds below ground do they need to be headed up and the answer is no they don’t. So would they root better if the buds on the top were headed up and the buds below the soil were headed down and the branch was sitting like a U in the pot you were rooting them in? That’s a good question but the reason why those of us who have done cuttings don’t try that is simply space because it’s more efficient to drive straight sticks in you sand or perlite or whatever your using for rooting medium. Nature does use the U method where the rooting buds are upside down. Remember when we root a thornless blackberry we don’t have the main plant feeding it so we need to work quickly and use rooting powder or gel and keep the cutting moist. The buds need to turn to leaves and feed the plant asap. There are people who grow plants via root division and I have done that and effectively below the ground that’s what’s happening. Remember when a tip is on the ground it’s growing upright again just like the parent plant and there is no way around that as you can see by the pictures. It’s hard to see but this picture specifically shows the cane headed downward and tip headed upward again after it’s other leaf node is rooting on the ground. So the plant just kept on growing which means the cane laid on the ground rooted and grew more at the tip upward. 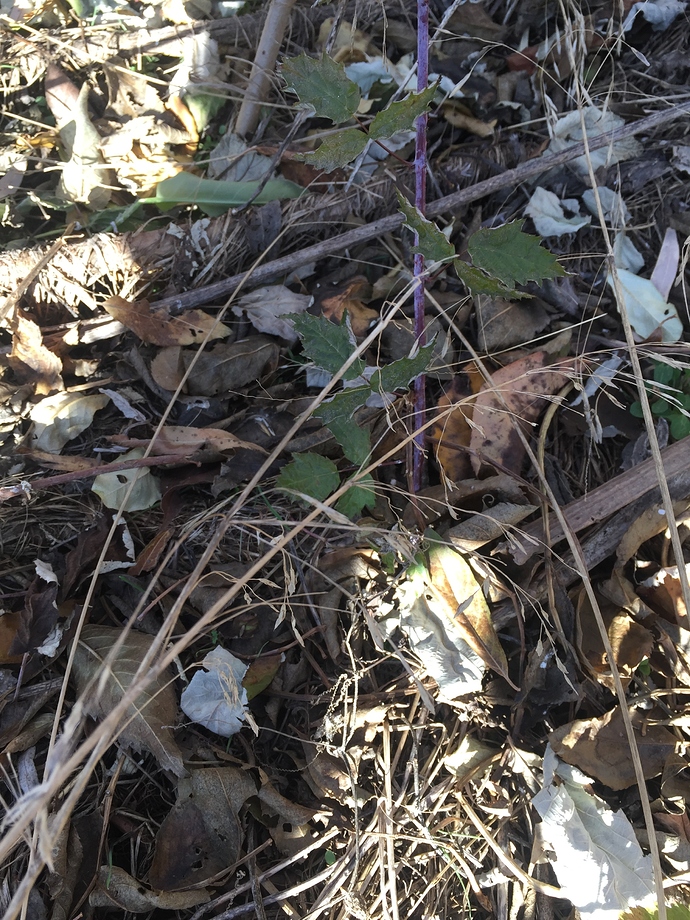 Uploading… Here is what I see.
These are two tip layers,I just pulled up and washed off.
Notice the bud at the tip of pen.
This is where it will grow from in the spring
At this point in time ,it can be cut where the roots start ,it is an independent plant.growing toward the distal end.
The buds behind the roots are irrelevant
I have started 1000s like this, and am very aware of the process.

What I have not done is root cuttings

Where / how a plantlet will form best on a cutting , and in which orientation ,
I still am not shur, …"it can be done, "that’s all I really wanted to know.

Iam going to try it…up…down…and sideways…!
I’ll let you know how it turns out.

Explain a little more about your process if you would.

On pruning a straight cut will favor a water bead staying there. An angled cut allows for runoff, and you keep the bud on the high side. It’s to avoid fungal infections on newly cut tips, if it happens to rain. On cuttings you’re right, I recently received fig cuttings and the opposite was done with the straight and angled cut. It happens! . On figs the bud is above the node, so that is how I tell on figs. Not all mark correctly. 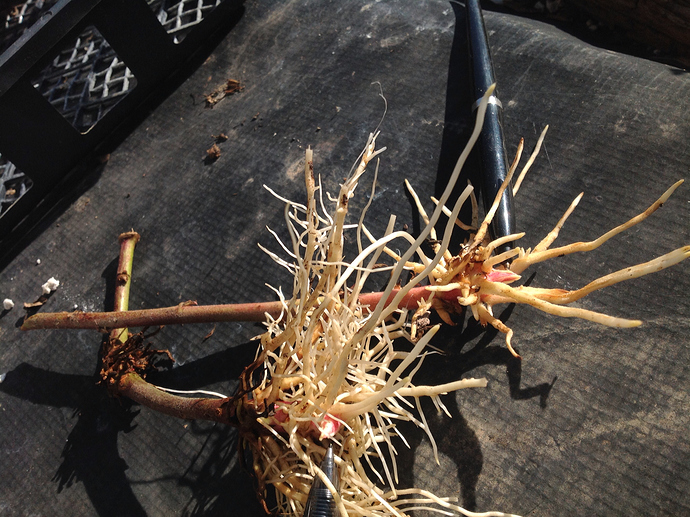 What I have not done is root cuttings

1000 is a lot of tip layered blackberry plants!

You may find rooted blackberry cuttings to be less work for larger amounts.

The process for rooting both hardwood and softwood Blackberry cuttings is similar to Blueberries, which is described here: http://articles.extension.org/pages/29211/blueberry-propagation

Some folks here have posted pictures of their propagation area/method. Everything from a 1 gallon nursery pot covered with a plastic bags to old aquariums with misters

A couple weeks ago, one kind forum member swapped me some Osage blackberry cuttings. I made fresh cuts on the bottom of the sticks just under the petiole nodes- rendering each stick half a foot long.

I split the lot in half, and put them in a pair of pots (sand, peat, perlite). One pot is outside under a dense shade tree tucked into a corner between the house and shed, covered with some pine needles. 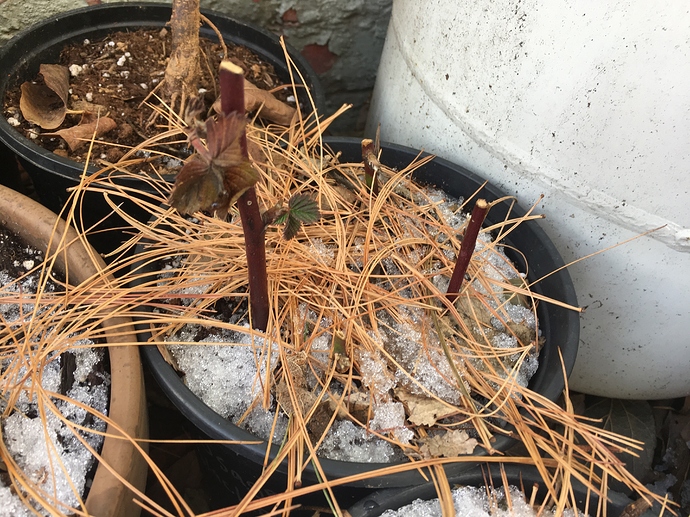 The other pot is on my bedroom dresser inside a humidity bin near an ambient-lighted north-facing window. 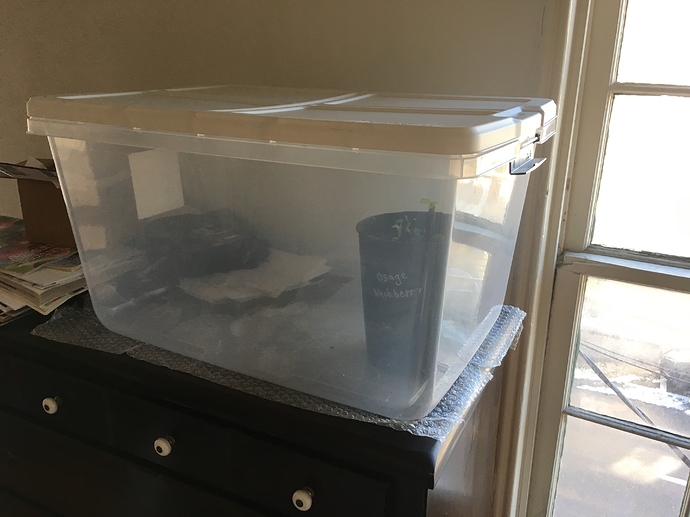 I’m ready for my close-up: 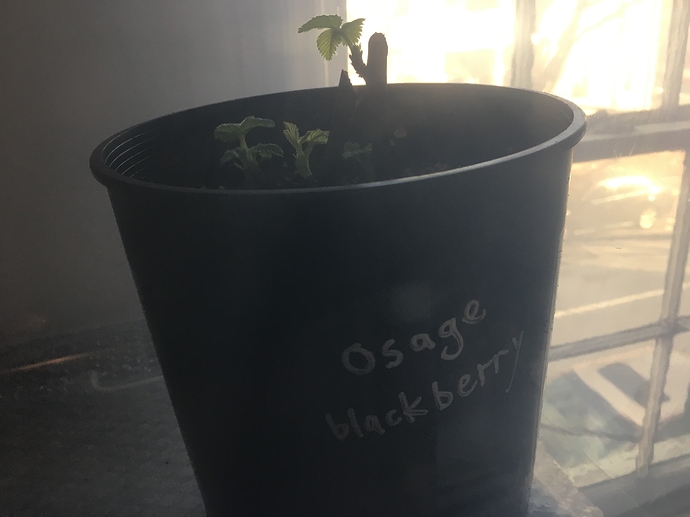 I occassionally crack open the lid to circulate air and gently water with a bulb dropper.

I have no idea if these will root. These methods are what I could throw together in a pinch.

Here is my test.;

)
( unknown Thornless black berry.
4" long waxed both ends
Put in zip lock ,with damp towel 1 month.70 deg.
Stuck in t 50 trays with pomix HP
Some trays , cuttings right side up
Some ,up side down
A pot , cuttings sideways
Covered with plastic filtered sun 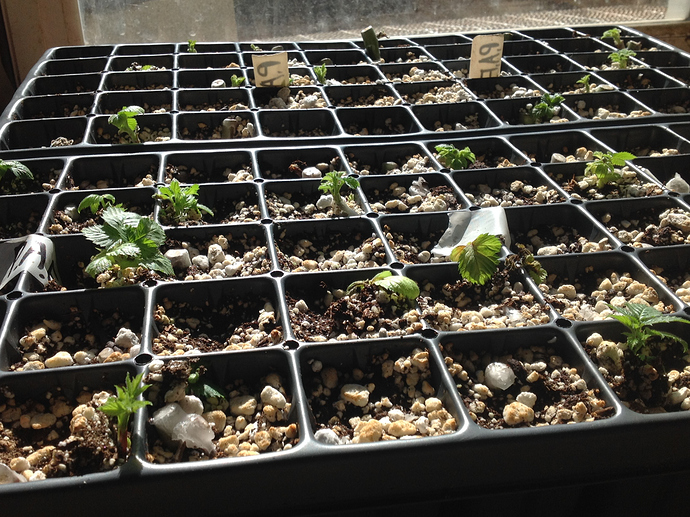 image2048×1536 1.2 MB
3 weeks later , shoots starting
Did not disturb to check roots
Of course these will be destroyed after trial ,as this is solely to determine rooting ability.

Does that mean: no difference between top-up, bottom-up, sideways, in the shoot forming process?

You can also cut a length of root into 3 inch segments, bury them shallow and keep damp and they will sprout. I have reproduced several this way. If I dug up a sucker sometimes I would pull up the distal root and it might be 1-4 feet long. I’m sure there is an optimal size but I could usually get a plant out of a piece that was about pencil lead size.