By the way, the Oscar that we planted in the ground (in the Phoenix AZ area) that is on flood irrigation is about 20 ft tall. It was planted in spring 2019. It is on rootstock (not sure what). It is looking like it will become fairly large. I pruned it the first few years, but I probably won’t be able to this year. The thinner branches are too high up for me to reach without a ladder. But the intention was to have shade so I did prune it with that in mind.

The Shangrila was on it’s own roots and was attached by some rodent the first year; I thought it was going to die, but it pulled through. It’s branching starts near the ground because of that first year damage so it is a much shorter tree. But the trunk is a good size 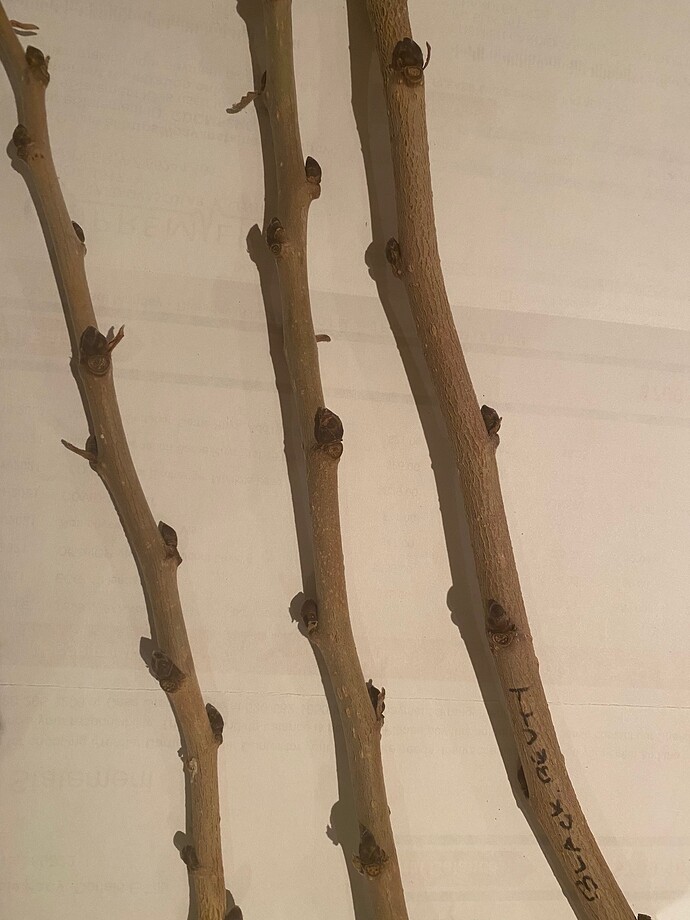 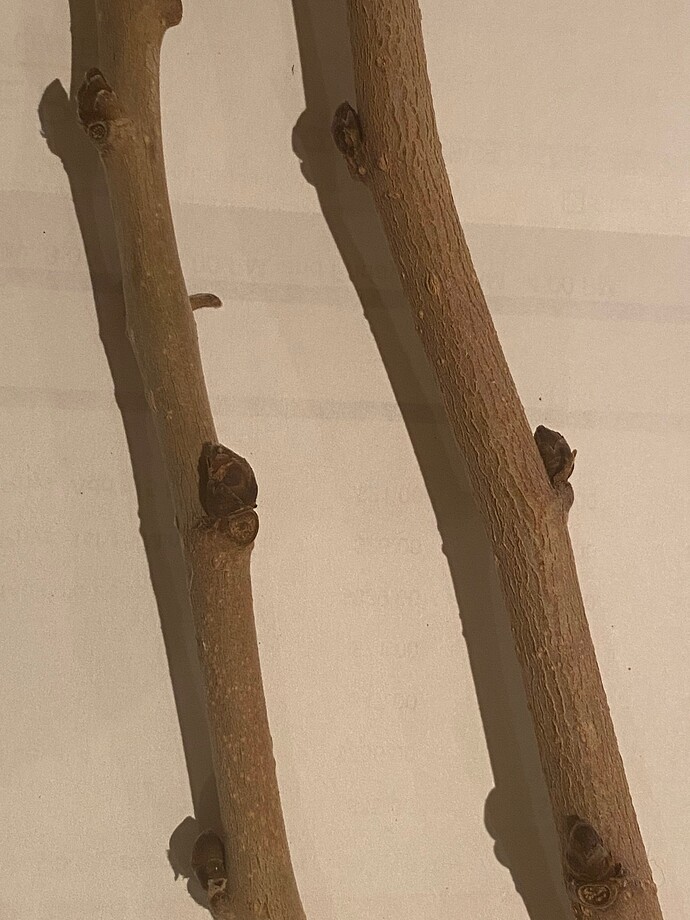 I think that’s a Morus nigra. Certainly worth trying.

Yes … the LE Cooke Black Beauty is morus nigra. I think the Gerardi is a combination but Whitmans lists it is a morus alba. It’s a dwarf tree so was thinking it might be one that I could graft onto the Gerardi. I believe it gets bigger than the Gerardi though. I was going to take the parent tree because the owner wanted to remove it from their property; it is about 4-5 years old; but it was around 10-12 feet tall with a 5" wide trunk so too big for me to dig out. The graft joint was at around 4 ft so was grown to be larger. I guess LE Cooke sold some with a higher graft point and some as bushes. It was a beautiful tree but had not fruited yet; chill hours are supposed to be 200 so it should have no problem fruiting in the Phoenix, AZ area. I did find someone else to re-home the tree to since the owner had not had a taker.

Gerardi is not an hybrid with morus nigra, very difficult to hybridize morus nigra with alba or others due to the chromossome difference.
Gerardi is most likely a hybrid between alba and red mulberry or alba with macroura or something like that.

planted with graft union below ground, will Gerardi root itself? Anyone with any experience out there on this one?

IE , Koksuo and oscar, seems like you prefer oscar? can you tell me more about how these two compare? i heard oscar was similar to IE

It might root by itself or not. Some are difficult to root when burying the graft. The problem i have with burying the grafts union is the possibility of rot… sometimes i just put the graft union at the soil level, most of the times i leave the grafts union as they were made and plant the mulberries at the soil level they were in pots.
If i want them on their own roots, when the trees are bigger i just airlyer them, and then i have 2 trees, 1 grafted and the 2nd one on their own roots. Seems more safe, as you might loose the original if you bury it

IE , Koksuo and oscar, seems like you prefer oscar? can you tell me more about how these two compare? i heard oscar was similar to IE

It’s been a while since I sampled them, but I posted a lot in this thread last June:

I’ve read through the thread and here’s a slightly modified version of what I posted then:
1.) Oscar
2.) Taiwanese Everbearing
3.) Illinois Everbearing
4a.) Gerardi
4b.) Pakistan
5.) Kokuso
6.) Wellington
7.) Wild rootstock

Gerardi & Pakistan were added in a tie for 4th, even though they aren’t that similar. It’s just hard to figure out which to put ahead of the other, as they are quite different. I think Pakistan was more sweet, while Gerardi is more balanced sweet-tart. Pakistan has much larger fruit, but isn’t as productive and is more likely to have winter dieback.

To put context around the list, I would look to graft more Oscar. I’m not opposed to more of TE and IE, but am probably not motivated enough to do it.

Gerardi is good for limited spaces and I’ll keep any Pakistan I have (interesting novelty given the massively long berry length), but won’t graft more .

Wellington and the rootstock branches are to be actively eliminated. Which reminds me that I need to look up my graft locations at one of the rentals to figure out which branches to remove, without removing the nearby Oscar…

thank you! wellington was very similar to IE for me. and geradi dwarf was more tart than sweet. so im looking for favors similar to IE less tart or when eaten not fully ripe wont be too tart. Or sweeter like the pakistan. so ill have to get myself oscar due to your recommendations! twainese everbearing is it also called twainese four seasons? are they the same?

Oscar has plenty of sweet and tart (like a reasonably ripe blackberry), so you may not like it if you don’t want any tart. But it was just about perfect from my tastes, as it had plenty of sweet to go with the tart. Kokuso and Wellington were boringly mild, but if you are looking for no tart, then they could be it. And as Scott pointed out to me in the other thread, I was picking many of the Kokuso too early, even though they were falling off at the slightest touch. So, if you can get them to ripen further without falling, they could get sweeter.

I don’t have any other info on Taiwanese Everbearing, other than that Sam sent me the wood in 2017. It is similar to Oscar in that it has plenty of tart to go with the sweet.

what i have seen is oscar leaves are unique. i have Worlds best and its black fruits isnt sweet for me since we arent warm enough its more tart. I guess the different mulberries have a different hat requirement to get the high brix.

That was my assumption also since I believed that, though Gerardi was often referred to as a Morus nigra cross, the extremely high polyploidy level (22n=308 chromosomes) would prevent crosses from occurring between 2n mulberries (as it does with many other plant species). But the work of Dithmar (@Mikatani) has proved me wrong because he has successfully crossed nigra with macroura.
A Florida woman, Jan Doolin, that has a passion for mulberries has been in discussions with a fellow named Johnny Bee, who says that his aunt’s sister knew Louis Edward Gerardi, who she said had crossed a ‘Himalayan long’ (Morus macroura) with ‘Chelsea’ (Morus nigra) to create ‘Gerardi’. Unfortunately, Mr. Gerardi passed away in 2012.
I have examined ‘Gerardi’ microscopically and, although it does have a fair amount of polyploidy, its nuclei size appears to be no greater than 2n (28 chromosomes), so it doesn’t have the thick leaves of its “Mother” (large nuclei=large cell size=thick leaves).

Just another case of someone thinking they had an M. nigra.

I always have always believed that Gerardi is actually a Morus rubra x alba because it has many “rubra” features. It could actually be described as the dwarf version of Illinois Everbearing. But indeed it may possibly be a rubra x nigra hybrid. I obtained quite a few nigra x macroura hybrids and most are dwarfish. I am now in the F2 phase where I’m crossing the F1 ( nigra x macroura) with other species like Morus kagayame and also “Taiwan Long” (Morus wittiorum). The result is sometimes astonishing as many of these hybrids are extremely dwarfish 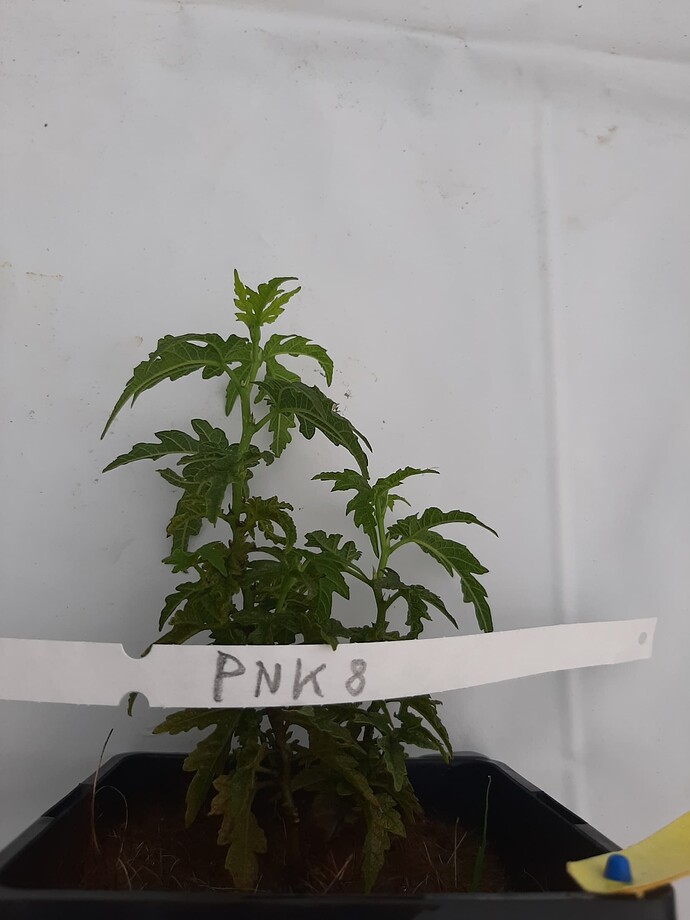 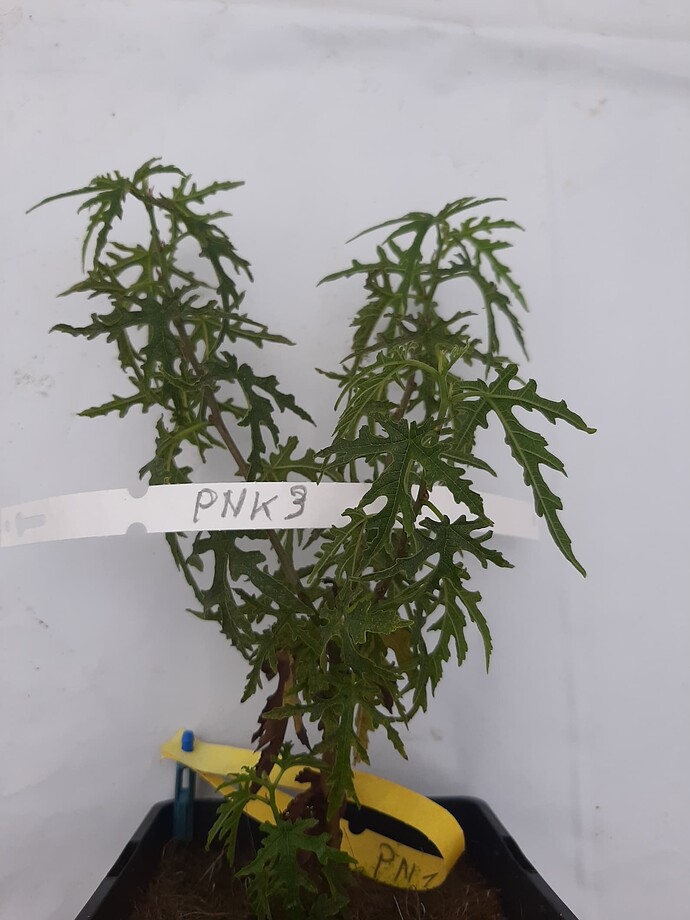 I am glad you were able to have help from a university’s genetics department to verify some of your creations. I have someone here at the university in Gainesville, Florida that is a genetics professor in the horticultural sciences department and is very much interested in studying the genetics behind cultivars of mulberries, but sadly it is difficult for him to allocate time and resources to a fruit that has little commercial interest.

That’s incredible!
Have you ever tried using any of your dwarfing seedlings as rootstock for vigorous cultivars? It’s been mentioned on this forum that grafting Illinois everbearing unto Gerardi rootstock didn’t slow the vigor of the scion. I’ve seen European nurseries list mulberries on dwarfing rootstock. I’m wondering what they use.

@Livinginawe
Nowadays, many biotech labs will provide a chromosome count and ploidy from a leaf sample for a nominal fee. This can distinguish between some of the Morus species. There is no systematic genetic test for distinguishing M. alba from M. rubra or their hybrids with each other or other species.

There is no systematic genetic test for distinguishing M. alba from M. rubra or their hybrids with each other or other species.

That was pretty much the understanding I received from Nico Cellinese, Curator and UF Herbarium Informatics Joint Professor, and with her background in genetics reviews publications for the PLoS One open-source scientific journal. She feels the science has a considerable way to go before it can truly be useful in mulberry differentiation and identification. I am ignorant myself, but I feel it must present some usefulness because of all the papers presented on mulberry genetic studies.