You’ve created some strange-looking beasts… It will be interesting if they retain their leaf form as they mature.

I think it would actually be an almost impossible task trying to classify mulberry varieties (not wild species) through genetic analysis because of the complexi hybridization. All mulberries within the “alba” group (this means nearly all mulberry varieties known today) hybridize readily among the species and subspecies and more recently also with Morus rubra. Considering that this hybridization has been going on for centuries I presume that the genetic composition of these hybrid varieties has become so complex that it is impossible to classify them into one or other species or subspecies.
About using the dwarf hybrids as dwarfing rootstock: this will only be helpfull if the rootstock actually has a weaker rootsystem in comparison to other mulberries. Gerardi Dwarf has a normal vigorous rootstock and is dwarfish because of the very short internodal distance. It is a genetic dwarf with normal rootsystem and as such it has no dwarfing influence on the variety grafted onto it. compare with apple rootstock: M9 and M27 are very weak rooting apple rootstock and will therefore induce weak growth on the variety grafted onto it and because of weak root system these will also need life long staking. To my knowledge such a rootstock does not yet exist among mulberries…

Just another case of someone thinking they had an M. nigra.

In retrospect, I now believe @Richard is correct (That ‘Gerardi’ isn’t a Morus nigra hybrid). A paper describing Morus nigra hybrids seems to imply that Morus nigra hybrids all have 168 chromosomes (154chromosomes from nigra plus 14 from a 28-chromosome parent). Also, @Mikatani confirmed that all the nigra crosses he has produced were 168 chromosome hybrids. The microscopic image I presented above shows nuclei with a diameter consistent with most non-nigra nuclei (like Morus rubra, alba, macroura). If is were truly a Morus nigra cross, having 168 chromosomes, it would be much, much larger.
It was, though, a story worth consideration, but from reading his obituary, it would appear that Louis Edward Gerardi spent his entire life living in Illinois. The story claims that ‘Gerardi Dwarf’ was obtained by crossing a Morus nigra with ‘Himalayan Long’, both of which would only survive in Illinois in greenhouse conditions. Not impossible, but not practical for someone whose main interest was in growing dahlia.
Morus nigra hybrid.pdf (3.4 MB)

I’ve got a Gerardi I purchased from Edible Landscaping this year and since it was so small (4 inches and quarter pencil-thickness) I planted it in a 2 gal pot for this season.

In one season this plant has grown from 4 inches to over 6 feet and the thickness is just about pencil thickness.

Is this wonderful growth indicative that what I received is not likely a Gerardi?

Is this wonderful growth indicative that what I received is not likely a Gerardi?

If you could provide a photo or two it would be very helpful. Six feet in one season is very suspicious. ‘Gerardi’ has a very short internode distance that is about half the distance of a regular mulberry, and for that reason, it was incorrectly assumed that it was a Morus nigra hybrid (Morus nigra, true Black Mulberry, also has a very short internode distance). 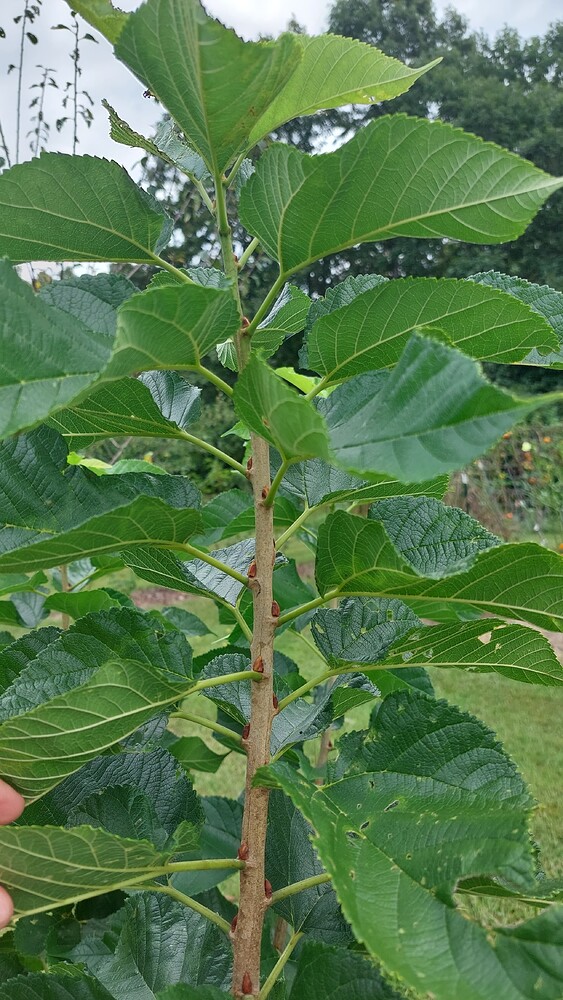 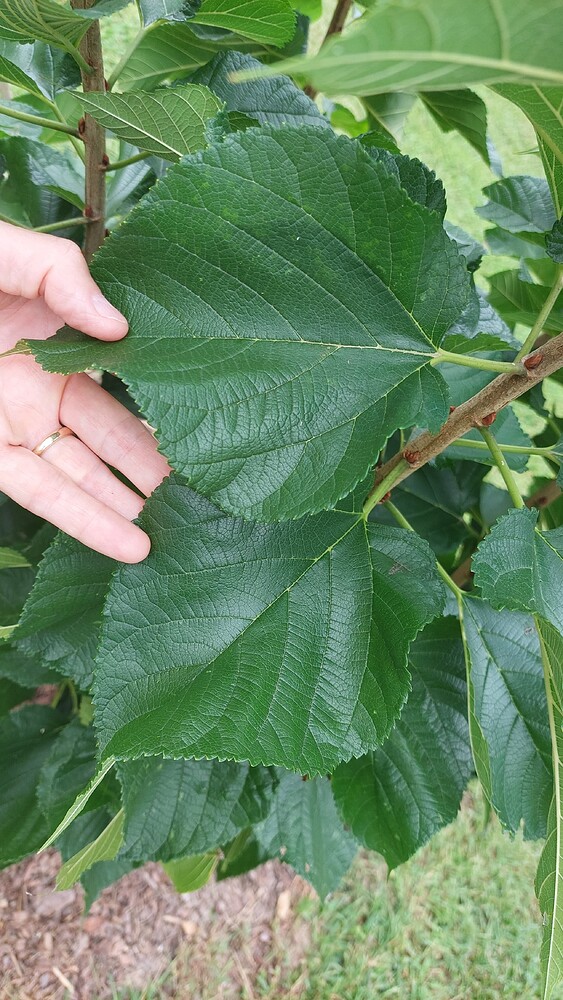 I grafted gerardi dwarf scions onto a 4 inch thick white mulberry stump this spring. Several of the shoots are over 6 ft tall now.

Good shot of the leaves and nodes above.

The nodes are tight… average 1 to 1.5 inches between nodes.

I looked and all the nodes are just about 1.5 inches…

The leaves look similar (but mulberry leaves do that).

I failed to control an Illinois Everbearing. This one will replace a World’s Best most likely. Perhaps it will slow down once put into the ground next spring… At least I hope so.