I love going out this time of year and picking black raspberries. I’ve been thinking about planting some so they’re easier to pick. Is there a lot of difference in flavor and productivity over the wild ones? I realize wild raspberries are more likely to carry viruses. Just curious if it’s worth the space?

I have wild ones on the property. They taste good, but are quite small. If you are paying money I would go with named larger varieties. Can’t speak to the taste difference, but I would assume the named varieties would also taste better. The wilds are small plants and put out a fair amount of crop. I think they have a little less of the sour than the reds with a slightly unique taste.

For space advice: How many black raspberries (pounds or quarts) would you use in a year?

Blackberries in the fields and fence rows are ripe here…raspberries long gone.

I picked 4 gallons of wild black raspberries last year. I make a protein powder/frozen fruit smoothie for breakfast every day. I could have used many, many more gallons if they were available to pick.

Black raspberries are just now ripening here. Blackberries are at least a month away from being ripe.

@Robert Ours vary on size. I’m not sure if it’s because of a unique seedling or if it’s just the conditions. There can be some side by side where one is almost the size of a dime and another is like a big pea. They aren’t the most flavorful this year though.

@LarryGene I could probably easily go though 5+ gallons if I had unlimited access. I usually have frozen fruit on my yogurt every morning. Sometimes I like to mix them in shakes several times a week.

It’s about the same for me as @smsmith the blackberries (wild at least) are a several weeks from being ripe.

It’s about the same for me as @smsmith the blackberries (wild at least) are a several weeks from being ripe.

My folks used to live in Juneau County, WI. We usually picked blackberries there in late July. Many years there’d be no or few berries due to lack of moisture (they were on pretty much beach sand). There were zero wild raspberries (red or black) there.

Pretty much the same soil as here. I’m right on the other side of the central sands in Waupaca county. Blackberries are definitely more prevalent. Were they any good? The wild one’s I’ve tried have been really underwhelming and sometimes almost bitter tasting. Might have just been the year too.

Were they any good?

You would need a 20-foot row of black-caps to get that many gallons.

I have planted zero black raspberries here. They show up in the woods where I’ve opened the canopy. I’d guess I have close to an acre of unmanaged black raspberry patches on my 87 acres.

That’s mainly what I’m wondering, if there’s qualities that make them worth planting like taste or size vs the wild ones or if it’s just as good to forage for them in the woods.

There is a lot of variance among the b.r.'s here. Some are so small they’re barely worth picking and others are nearly the size of my domestic reds. My theory is if they’re ripe or almost so…I pick 'em

I’ve looked at domestic b.r.'s a few times, but it seems most would be borderline winter hardy here.

Wild plants can vary greatly from one another, as it’s all natural pollination and selection. If you find one that has berries you like, take a cutting off of it or dig up a few canes. Cultivars are good for predictable results, Starting disease free (which might be pointless if you have so many wild ones growing so close), disease resistance, and known traits for taste, plus some are thornless. The other thing is the option of a Fall/ everbearing variety as well if it can grow in your zone.

About 45 minutes worth of picking. Around 3 qts. plus a handful or two of domestic blueberries. I suck at growing BB’s. Pretty much planted them in pots of peat moss 3 years ago and ignored them ever since. I do try to soak them when I think of it. I could have easily picked another 3 qts. of BRs, but the mosquitos are unreal. Clouds of them every time I moved and there’s zero breeze today. I also found a few spots where the bears have been eating and that put me a bit on edge 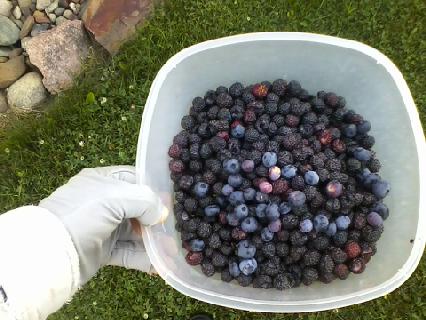 Bears… yea being in Maine it’s black bear central here. My buddy has one that visits his neighbors garden. When I go picking in his area, I make sure to keep eye out and be prepared.

Here’s what I ended up picking this afternoon. Some taste great others taste like water… 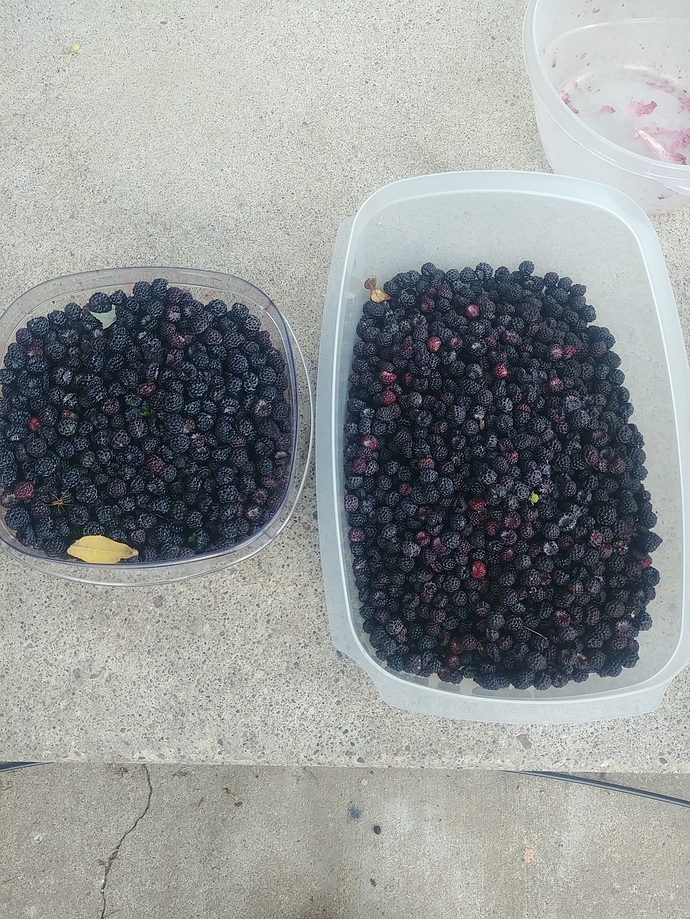 Ours vary on size. I’m not sure if it’s because of a unique seedling or if it’s just the conditions. There can be some side by side where one is almost the size of a dime and another is like a big pea.

Here’s a pic from Backyardberryplants.com. I’ve ordered from them years ago (before I moved mostly to tree-fruit) and they send nice plants (a bit expensive though).

Jewel on top and wild on bottom: 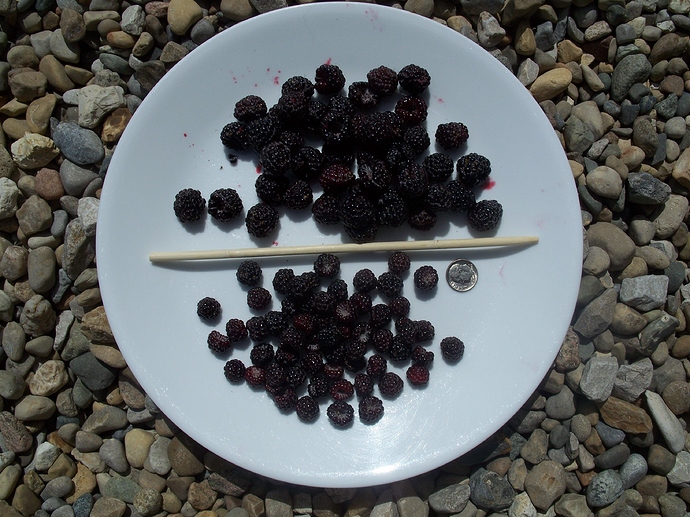 Per their site, Jewel is 2-3X the size of the wild ones.

Our wild black caps get big here in Michigan but there are some smaller ones too. I love the way they taste they are my favorite berry. I mowed them down this year. They got out of control. I had about 100’ of them growing through my deer fence which worked great for a few years but made a mess later on. I took the fence down seeing my trees are big enough that the deer don’t really do much now. I still protect a few smaller trees. I would say most of mine looked like the picture of the Jewel above. They make the best jam. I made so much jam I had to give it away. I quit doing all that berry picking because it makes my back go out from leaning into the patch. I would tie a rope to the bucket handle and put it around my neck so the bucket was at the correct height for hands free picking. It speeds things up. Also the wild turkeys would find them and destroy the patch!