Okay, a little off topic, but we’ve discussed club apples here before.

Funny, this is the same year Cosmic Crisp was distributed widely enough that I was able to buy some fruit.

Just saw these at Costco today and bought them on a whim, because I’ve been unhappy with the quality of the Opal and Envy that are still hanging around this time of year, before the New Zealand shipments take up the slack.

They have a great texture, tons of sugar and plenty of acid. It’s a cross between Honeycrisp and Cripps Pink (AKA Pink Lady).

It was so sweet I had to measure. The first one was 17.5 brix. I like the first two of these better than most, perhaps all, of the Cosmic Crisp I had this year. 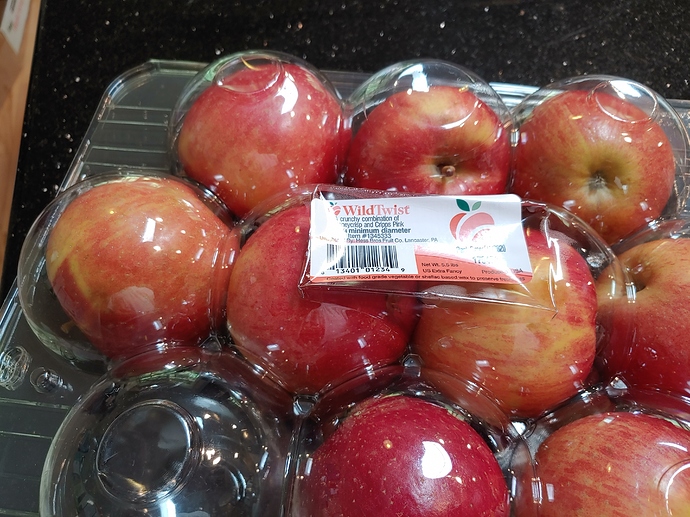 Soon, there will be more club apples than we can shake a stick at.

I should go out and cross pollinate my Honey Crisp with my Pink Lady to see what I could get. A really, really wild twist?

I had some of these last fall, shortly after they were introduced. They were developed in Lancaster, PA.

I agree with you about the great texture. It’s real crisp but not as light and airy(which I dislike) as Honeycrisp. It has a more substantial feel to it but isn’t dense(which I also dislike) like Cripps Pink. Really a perfect texture for my tastes. Nice and juicy as well.

The sweet/tart balance is also very nice. Mine was not as sweet as yours (likely due to storage time?), but was sweet enough for my tastes. I listed it as moderately sweet and moderately tart, which is pretty nice for my tastes. I like apples that are fairly high in tartness, and high in flavor & complexity.

The big downside with this apple is the flavor. In the few apples I tried, it was almost non-existent. Very mild and bland. The flavor that is there is like a real mild sweet/tart apple juice, so it’s a pretty simple flavor as well.

I was real disappointed with the blandness. It has everything else going for it (perfect texture, great sweet/tart balance, juicy), but just doesn’t have the flavor to back it up. I do still like them a bit better than Honeycrisp, but I’m not a big fan of Honeycrisp (texture is too light and airy and feels unsubstantial and off-putting in my mouth). As far as the super crisp club apples go, I liked Cosmic Crisp and SweeTango better than Wild Twist. They at least had some flavor or complexity to them that was lacking in Wild Twist.

Have you guys try the Pacific Rose and Kanzi club apples yet? Taste and texture?

I haven’t tried or seen Pacific Rose yet.

I really like Kanzi though.
For texture, Kanzi is one of my favorites. Similar to Ambrosia. Quite crisp & crunchy, with a good snap. Flesh has a bit of softness to it that makes it easy to eat. Not too light or dense. Really good mouth-feel. Very juicy.
Moderately sweet with a fairly high amount of tartness.
Mild-moderate amount of flavor. Flavor is fairly simple, with a green apple candy type of flavor due to the amount of tartness. The lack of complexity in flavor is the only thing that holds it back from being great, in my opinion.

Picked this one up today during my biweekly Costco trip.
It is definitely an interesting apple. You can certainly tell the Honeycrisp/Cripps pink parentage. Has the distinctive honeycrisp crunch while being a much milder apple than cosmic crisp. Cosmic crisp is for people that like very intense apple flavors – high acid, high brix. This one is much more muted.

I agree with @TJ_westPA, it appears to lack in the flavor department – not much of an aroma. The skin is also a thicker than I would have liked.

For me, Opal is still the standout club apple.

I agree that Opal is a stand-out, maybe THE standout. But right now, I can’t buy good Opals.

These WildTwist are good now, and grown in the US. Maybe the thick skin helps, and they’ve probably been sitting on these because they know how well they store and that there will be no competition in May.

I usually eat the skin on persimmons, compared to that, this melts in your mouth.

I really believe that club apple discussion should usually be in the lounge category, unless it has something to do with actually growing fruit for our members.

Maybe because I hate hearing about apples or other fruit that I can’t grow.

I hear you Alan. But it isn’t much of a leap from “I know fruit like this is available” to how can i, or why can’t I grow something like this? Or, is i worth growing apples to eat in May?

I probably wouldn’t grow this apple unless it offered some advantages that made it easier than others.

I probably wouldn’t grow this apple

I probably wouldn’t grow any club apple because it would be illegal and very difficult to acquire wood anyway. Therefore not a general fruit growing topic.

I see no reason why we cannot talk about club apples in the General Fruit Growing at least for information sharing. We have so many new members. Some may not know what club apples are.

If we move club apple threads to Lounge, there will be a lot of members who can’t access Lounge yet as they have not reach a level 3 status.

I believe people can be civil and discuss club apples, their preferences, etc. without getting into gripes about their exclusivity.

Alan, fundamentally you are right. Especially regarding a particular club apple.

But it isn’t so cut and dried.

Club apples are protected by patent, trademark and contract.

The trademark only affects what you can call the apple and how you can market it. The patent is good for 20 years from filing then its protections expire. The contract is between the owners of patent/trademark and their growers. It has no power over us.

Once one of these club apples goes off patent, there’s nothing to prevent us from growing it other than access to scions. Once a scion gets into the public domain, its fair game. How it gets there is another matter.

We are also free to use the seeds from these apples to do with as we will.

I am only about a year away from having something very close to Envy apple. Did many crosses of Royal Gala X Braeburn for the last 4 years.

Interesting. I like neither Gala, nor Braeburn. At least not the ones they sell around here (Honeycrisp here are no good to me either). But Envy are usually worth eating and keep really well. Are those its parents? It has such a better texture than I think of either of them as having.

Yes, I got ten seedlings grafts going for the last few years. Hopefully to get to try the fruits soon. Working on Opal next.

Well, the WildTwist has carried us through. The local upscale grocer has Smitten tm from New Zealand. These ones are a bit small, but hard, crisp, and super sweet. I’ll have to measure brix on one of them.

I measured a different Smitten, only 12.5 brix, but good. Probably not as sweet as the first one from that batch, but apparently not even close to WildTwist.

My wife picked up a bag of wild twist apples at the store tonight. I’ll update with thoughts once I try a couple.

Topics about club varieties probably belong in the lounge as I don’t think any members are involved in the growing of them. Personally, I’m not thrilled to read about how great new varieties are that I’m excluded from growing.

Barring crop failure, don’t buy apples any more, which I assume is a common goal of most growers in climates where they can be grown.