Will my single apple tree pollinate?

Another Z9a southeast GA question. There aren’t many apple trees around here, but there are some, and the stores sell plenty of them. My question is: Will a single tree pollinate? The tags on the apple trees say it needs a pollinator. Thanks, Ed

Very few apples are self fertile. You will need a 2nd compatible variety, or graft a couple of pollinator limbs onto your tree.

If you have any apple or crab apples within a couple of blocks or so you’ll likely get pollination from them. On the other hand, if you need a reason to add another variety, well, that’s as good a reason as any.

But wait a minute: who needs a reason?

I would say graft a pollenizer branch in. Really pretty easy and gets you at least a couple different fruits–you never said what you had but you could go for something to complement yours flavor wise or ripening timewise

Am thinking about an Anna apple. Did a bit of research, and it’s one of only a few recommended for my zone. I like the idea of grafting in a branch or two. Would it be ok if I just discreetly snipped one or two off another tree when I go to buy it? The apple trees are just showing up in stores around here, and weather is warming. Would it be ok to graft right away? …or wait a week or two until the tree gets a bit used to its new home? The apple trees are still dormant, but probably won’t take much to swell the buds.

Would it be ok if I just discreetly snipped one or two off another tree when I go to buy it?

Well, it wouldn’t hurt anything if you didn’t get caught, but I’m pretty sure you’d be frowned on if you did. I did ask once and the clerk let me, but I think she was a little unsure!

You might call a local extension agent and ask about any groups; I’ve walked up and chatted with commercial growers who were willing to share. Got my Cox’s, Kidd’s, and Calville Blanc that way just a couple of years ago. The folks at farmers markets might be up for it. In other words, ask around. Can’t hurt and you might make some friends.

Although there are quite a few antique apples that are self fertile, if you have neighbors with flowering crab apple trees…you’re probably taken care of in the pollination department.
But here are 5 for starters that you can succeed with one tree:
Grimes Golden, Braeburn, Red Devil, Wolf River, Yellow Delicious. There are more if you search for them.

Golden Dorset and Anna are usually sold together.
Though they are not on my scion list, I do have them in the field. So if you don’t want to snitch some scion off a tree at a store, I can send you some.

@edweather, like you and probably even more so down here in Florida, apple trees are scarce. Citrus abounds, but I’d be willing to bet I have the only “home orchard” apples in a several mile radius. Having said that, I believe the Dorsett to be somewhat self-fertile, at least in my personal observation. It does better with a pollinator, such as Anna but prior to have other blossoming apple trees in my yard, this tree set fruit.

As @joleneakamama mentioned the Dorsett and Anna are usually sold together and either way I’d recommend getting at least two. If you have the room, I’d get 4, you just never know if some will fail…

For reference, I’m also growing an apple called Joy that is doing well, and I’ve grafted a number of different varieties to the Dorsett. Seems to be a good host…

another option is to plant or graft scions of Malus Angustifolia Native US southern crabapple. Of course I do not know if the bloom period overlaps.

Goden Dorsett would be a good choice here for the graft. My Anna blossomed long before my other half dozen apples, & wouldn’t be pollinized by them here in Dallas.

Ok, well we bought the Anna. Had the pick of the litter, it’s a really nice tree, and hopefully will have apples this year. The UFL website has the chill hours for the Anna at 300, and Dorsett Golden at 250. I’m hoping it doesn’t matter too much which one we purchased. This tree was much thicker and fuller than the others, so we grabbed it. Granted I’m no experienced apple grower, so am bound to make a few mistakes along the way. 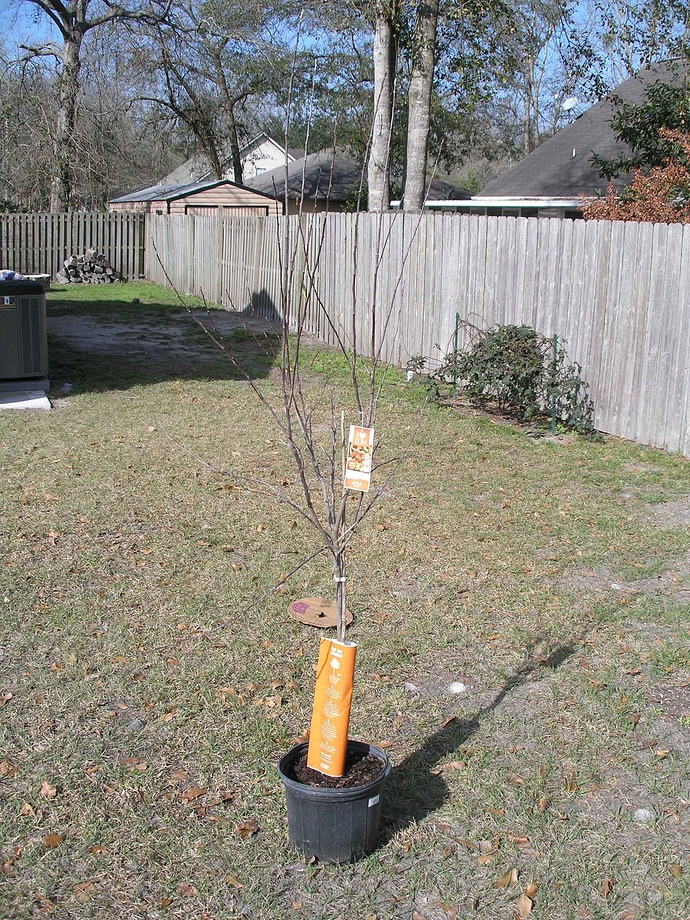 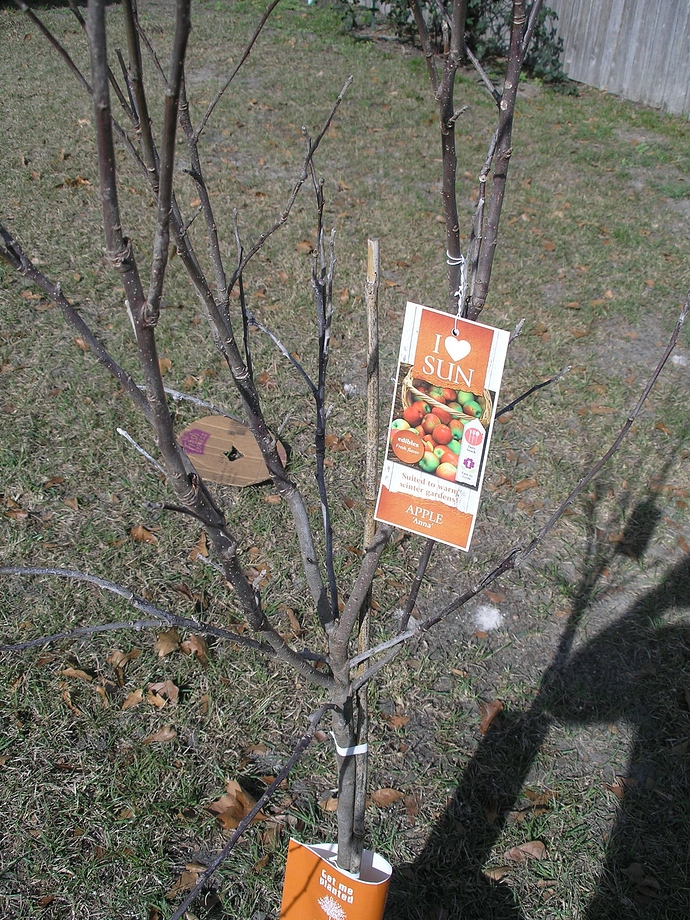 Applenut says that Anna will dominate a multi graft tree, but if the other varieties are mainly for pollination it might not matter.
I have a few other varieties that applenut has tested in a warm climate. If you want any, just let me know.

you’ll want to get it pruned up a bit so you have a nice central leader…also, not sure what the soil is like in your area, but the Just Fruit and Exotics website has good instructions for hole prep.

Can I have two main leaders? I hate to cut the branches, they look so nice. Looks like there are 3 main branches, one lower than the other two. The other two are right next to each other, and are about equal. What about all the skinny shoots? I mean, how much am I supposed to prune? What will happen if I just let it grow? edit: Just did a little research on pruning, and it was very informative. The tree I bought might lend itself to more of an open base shape, instead of a central leader, but to be continued. …just want to get it into the ground today. @jeremymillrood, I checked out the JF & E on hole prep, very good, thanks.

I will start by saying that I’m not a pruning expert. It’s something I do by feel. Considering that the tree is so small you could get away with having two leaders on there, but I would want to get rid of those tiny little shoots and anything that looks dead/dried out, especially the ones with narrow crotch angles.

Anna is supposedly much better than G Dorsett; but if you graft something onto the Anna, the Dorsett’s a great choice

Thanks for all the help everybody. The tree is in the ground. In addition to the help on this forum, I’ll be doing lots of research on pruning. Yea, the little shoots will come off, and topping looks fairly easy. Not going to meltdown over it. Spring fever is in the air here, and I need to stay throttled back. The internet has lots of great pruning videos, am sure I’ll learn about it, no problem. Will probably need some suggestions on which will be the best branches to graft. Ed