Wish I had some pollen right about now

So I purchased this flavor supreme last year and stuck it in a pot because I thought I would be gambling if I put it in the ground. Over wintered it in my garage and looks like she made it. I can’t believe how covered it is in blooms for only being its second leaf with me. Now here is the problem…since it is potted, it is ahead of my in ground plums and I have NO pollinators! Ugh!! Guess I will have to wait until next year to try a flavor supreme. 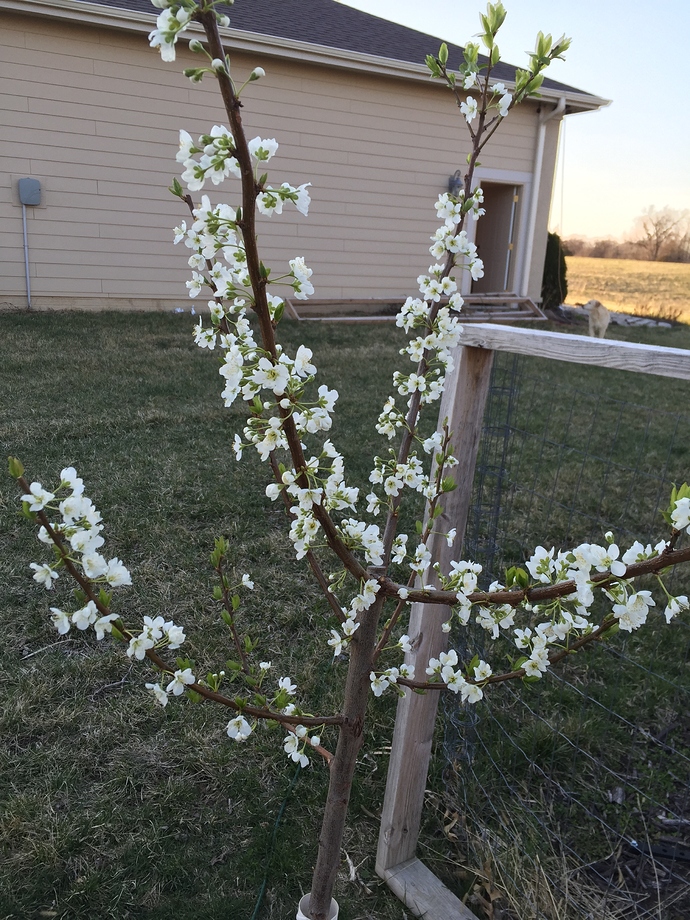 That’s not good. Any box stores or nurseries around have anything blooming. I know the ones that show up here usually bloom a few weeks earlier than local trees because they came from somewhere warmer.

Oh! That is a really good idea! I know lowes had a bunch last time I stopped there. I noticed a few of the peaches were about to bloom…maybe they have a plum I could borrow some pollen from.

I have a 4 in 1 pluot coming this spring I am also going to put in a pot. That should have me covered in the future.

I bet someone has something blooming.

Just an fyi for ya. I had both a FS and FK in ground here in CR and both made it through without issue with the winter we had 2 years ago (2014). So take it for what is worth. It’s also very interesting to see your FS way ahead of mine that i also have in a pot.

Thanks for the info, Sean. I have some sweet cherries and a nadia in the ground, and they have all been fine. If I like the fruit enough, maybe I will get another one to put in the ground and see how it goes.

This is my first year over wintering a tree in my garage, and I must have kept it in the garage too long which caused it to bloom early. I even kept it by the north side wall opposite the side which is attached to the house. Oh well, I am just excited to see it doing so well. My orchard is very young(3 years) and seeing a tree in full bloom like this is a new experience!

If it looks like this is going to happen again you can cut some branches from your other trees and force them to bloom in a vase inside to get some pollen. The warm temps inside will help them catch up to the container tree.

That is good to know. I total wrote off those interspecifics because they were Zone 6 or greater. My little frost pocket of a back yard in Coralville got to -19 F in 2014 and 2015. What do you think your lowest temperature was in 2014?

I would be interested in his low temp as well. I am south of DSM in Madison county. I didn’t have a personal weather station in 2014, but I am pretty positive we got close to -20. All my trees survived, but all my raspberry canes were all dead which I thought was strange. This year was a totally different story. Only a couple nights below zero and the lowest according to my PWS was -7.8.

Historical data shows -21 in February. Also at that time the tree was planted on a slope near the bottom of a valley. I’m willing to bet it was a tad colder down there. 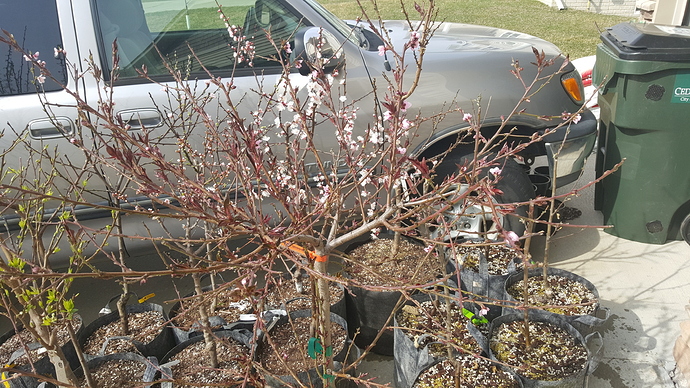 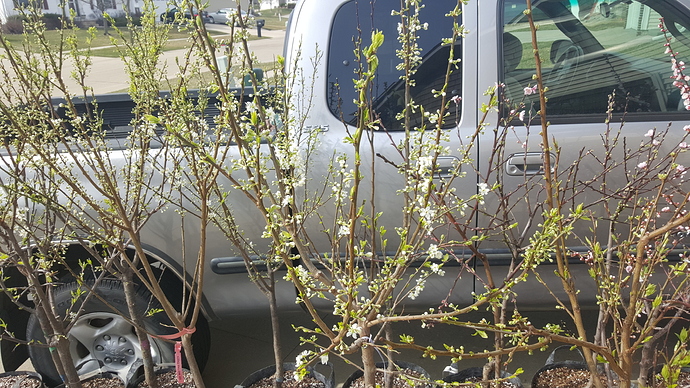 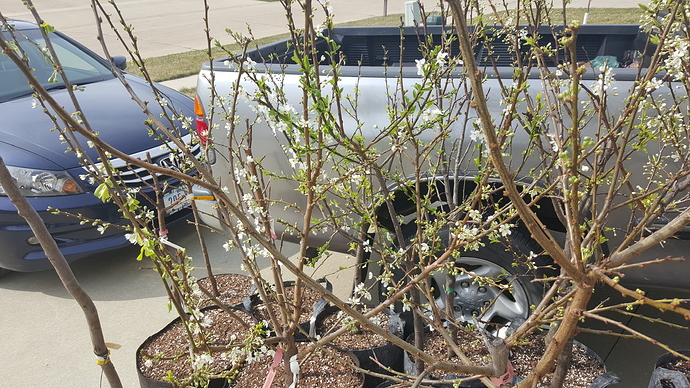 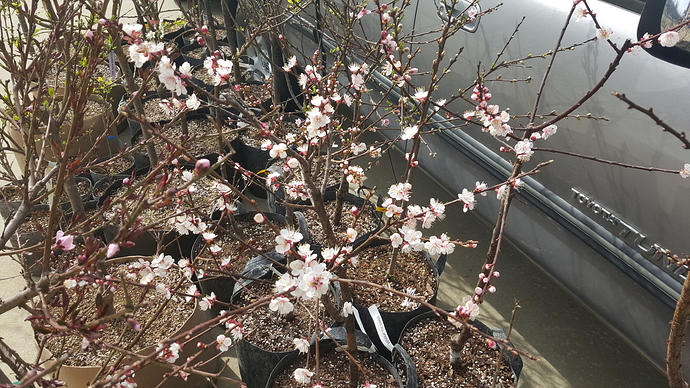 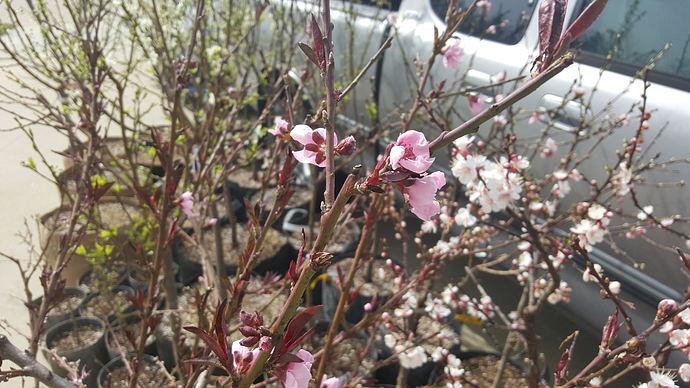 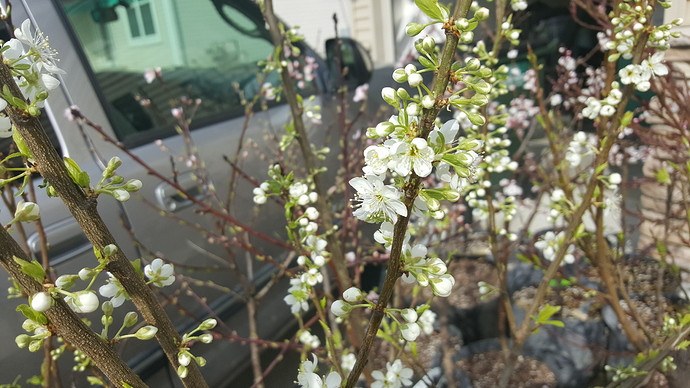 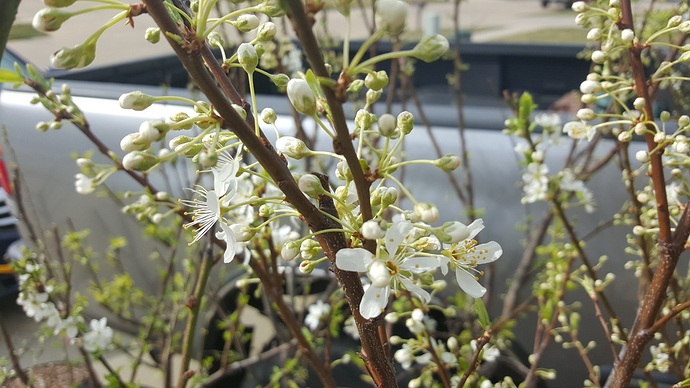 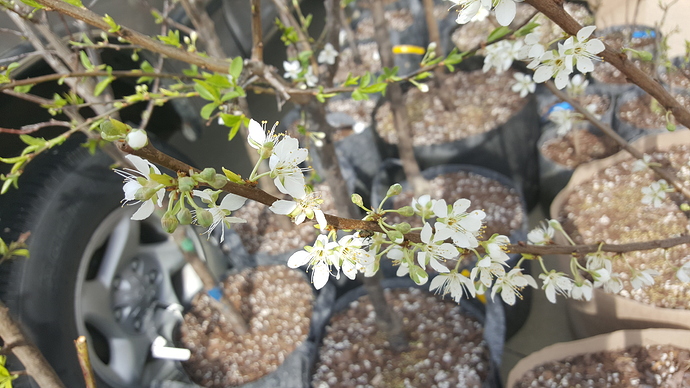 Interesting site in CR for sure. Not a single tree around has any leaves yet lol!!

SE of DSM now, 10 or so years ago a 2 wk. stretch of -25. My stone fruit then didn’t survive, neither did my fancy honeybee queens. This was a very mild winter for us.
1977 and 1988 both were warmer, skipped Feb. both years and turned very dry in June/July.

Look what I found!!

Looks like I have a shot at some flavor supremes this year!! 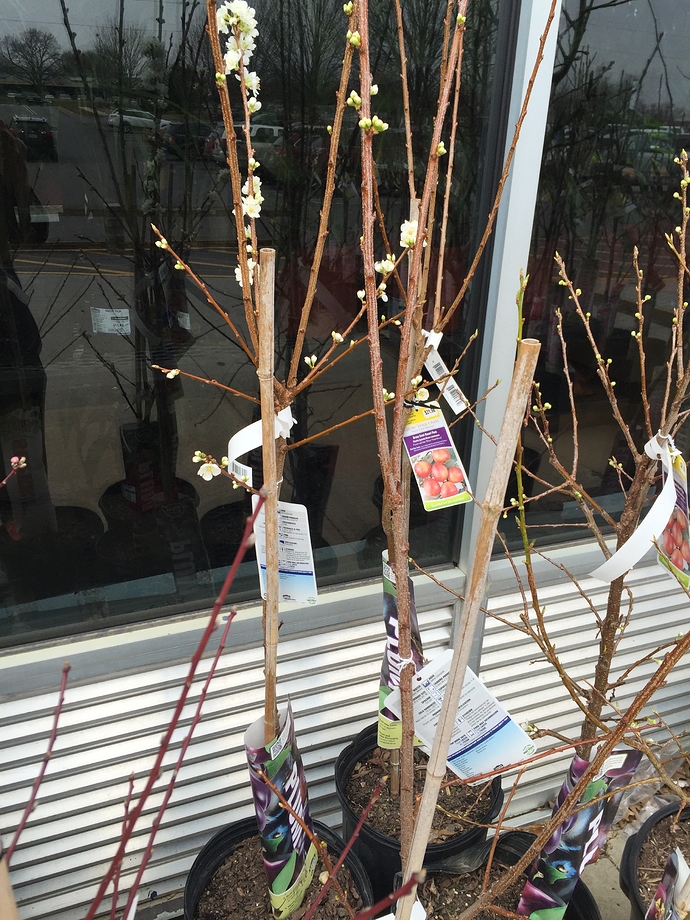 Did you know you can buy pollen? Google pollen for sale.

Maybe you could buy a tree, pollinate and then return it. Or help them prune for shape. ;).

Yep, Lowes. They had 4 plums and all were flowering. All they had was Bruce plum as well. I don’t know much about it…is it worth keeping?

Haven’t a clue. Never heard of it until a saw them there a few years back. Being a big box store i have had ZERO luck with any plant being decent or living beyond 2 years with any success.

Today when I was out checking my apricot trees, I saw bees! I have two apricot trees, with one in full bloom. The other one has yet to bloom. I was thinking of hand pollinate this weekend.

I did not get any fruits off the two trees last year.