Zestar! has made its first significant crop for me, 7th leaf tree on antonovka roots.
Thanks to U of Minnesota for creating so many great apples for the north, this one is quite a nice summer apple for fresh eating and processing. Certainly has some bite in a subacid kind of way, really nice size to them to. Tree is pretty vigorous and seems scab resistant in my yard. Good crunch, not as dense in texture as many later apples. Certainly a good choice for this time of season, I have top worked over many of my summer apple varieties but this one is going to stay like it is…pictured with a Trailman Crab. 11 Brix (Trailman 13 brix). 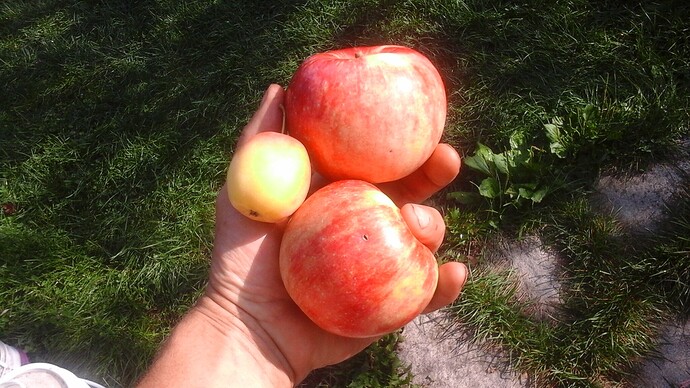 Yes it’s a great late summer Apple. Better for me than Williams Pride or Pristine. I think Gravenstein is still tops for me.

I tried it last week at a Farmer’s Market in Ithaca. Granted, the apples in the bin were small for lack of thinning. That could affect its taste. However, it’s too sour to my liking. To me, Gravenstein is a lot better as it has a good mix of sweetness and tartness.

My William’s Pride this year were mostly subpar. The texture is more porous than crunch. Its taste was also off, too bland for the most part.

Sour is not Zestar, those were harvested too early. I like to really let them hang, they don’t go mealy at all. I had one yesterday that was a bomb of fruit-candy flavors. I am getting some spot rots (frog-eye) on them as well as a bit of watercore.

Glad to know. My impression was way off, then.

I had one yesterday that was a bomb of fruit-candy flavors.

I had that last year. And I got impatient and harvested mine probably 2 weeks too early this year. Now I have a bunch of sour Zestar like mamuang. I need a Pristine graft to fill that late July “must pick apples now” urge.

I harvested my Zestar too early in the beginning of August, they were nice but sour. I also let some of them to hang on the tree. I still have a couple of them hanging. These late ones became very sweet, like candy sweet, a little bit too much for me. They also are the largest apples between several varieties that I have. Here is the picture of the fully ripe Zestar. They do not color well for me, but the green color is almost gone they are pink and red. 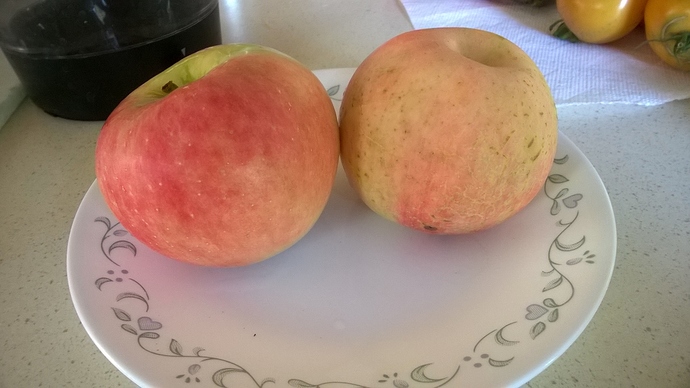 I tasted Zestar, Gravenstein and Discvery from the same place. They all were small (unthinned) and picked too early.

With that in mind, an underripe Gravenstein still tasted good with a nice combination sweet and sour blend.

I look forward to eating fully ripe Gravenstein in the future.

My Williams Pride weren’t the best this year.

A week and a half later, still picking a few from my tree and the flavor has improved quite a bit. Sweeter and a vinious flavor is emerging, still pretty crunchy. Fall is in the air…these certainly taste like it!

I agree my later WP got more flavorful.