Well, our tuxedo cat left the premises about a year and half ago, and never came back. Who knows what happened to him, my guess is not good.

We have this one and his brother, we got them from my wife’s friend, her tabby had about seven kittens. She brought them by about a year ago.

One disappeared last month for a couple days, we thought he was gone. But he came back with part of his ear scarred, and wasn’t really getting around real well. He winced when we tried to pick him up, and he couldn’t jump like he used to. Guess he got in a fight with another tomcat.He’s now almost getting to back to normal.

The other one looks like he has some kind of allergy issues, his eyes look a bit weepy, and he sneezes sometimes. Does that sould like an allergy, and if so, is there something we could give him? 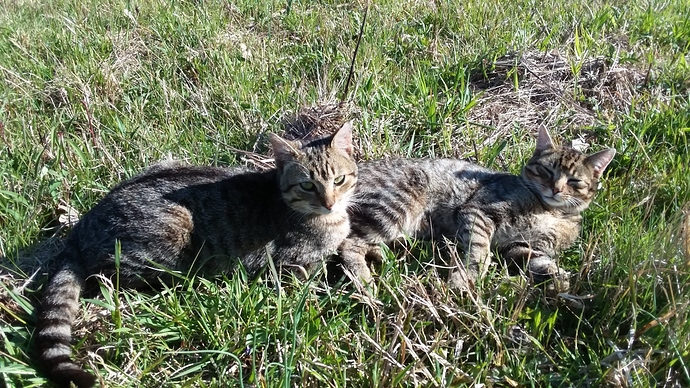 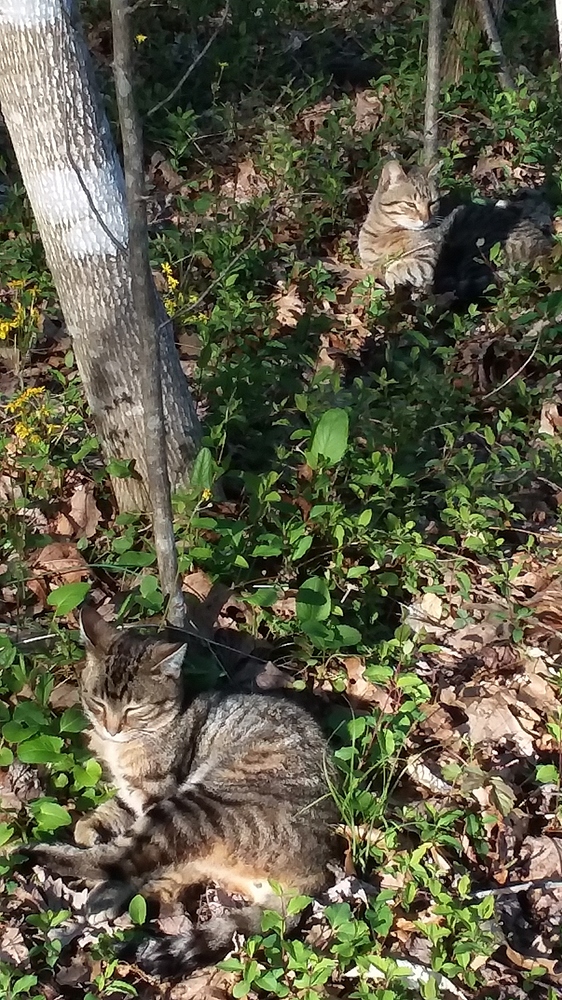 I’m not sure the blackberry variety, I bought primark freedom, but mine has thorns

Okay, thanks. How much of a pill? I have generic antihistimines.

Late last night I was in bed about to turn off the light and I heard a big ruckus on the front deck. So, I grabbed a spotlight, and opened the door and saw what looks like a Great Pyrennes dog with a smaller dog trotting down the driveway. I yelled at them, and out from under the deck bolted two more small dogs, and ran down the hill.

I was worried about my cats, so I called for them. One came up from the barn area, he seemed okay, but couldn’t find the other. Until I walked around the shed and heard a muted meowing coming from above. It was the other cat, about 20ft up a big tree. I guess the dogs ran him up the tree, or he wanted to get as high above them as possible.

I tried to talk him down, but he wasn’t budging, guess he was still spooked. This was the one that got in a bad scuffle before, so I guess he was well enough to get up a tree.

I don’t know why the dogs were here, unless he was out prowling and they caught scent of him and chased him up the hill. Or they were looking for food. I have seen the big white dog (GP) around the farm before with his little buddy and chased them off.

Anyway, I saw both cats this morning, they seem to be okay.

Thanks @subdood_ky_z6b for making this thread. So interesting to see the differences in blooming times etc!
This year we decided to try Rhaspberries again. We planted 10 Autumn Firsts and 3 Black Jewel black rhaspberries. Until now they look healthy, but small, of course. Last week it has only been raining…until now they still look very good.

The cassis bush is full of blooms: 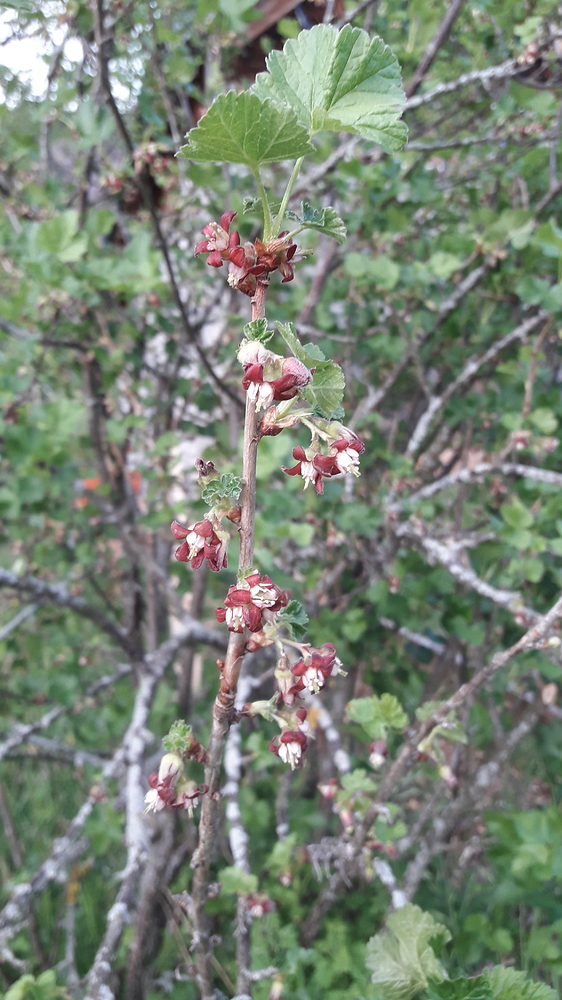 The amelanchier has already bloomed and is full of little fruitlets.

What is a cassis? Is it like a cherry or currant?

I’m not sure the blackberry variety, I bought primark freedom, but mine has thorns

Could be, once it proves to be not the variety I ordered, I’m not that great at guessing. In fact, based on how many things have been wrong on orders I know about…I guess 20-40% of all my orders are likely the wrong variety. I wonder how sometimes to really know I got what I ordered unless it’s very distinctive.

Well, if you get berries off the primocanes, and it’s thorny, then it has to be PA45. I don’t know of any other thorny primocane blackberries, at least those that are still being sold.

I have PAF and Traveler, and they’re both thornless primocane bearers.

If your thorny plant bears only on floricanes, it could be Shawnee or Kiowa, the latter produces huge berries from what I’ve read.

Yes, they’re an improved Autumn Bliss. Autumn Bliss always did well for my mother so if this is even better I’m looking forward to this berries!
Ups, I meant to write Josta, not Cassis. I was quite tired last evening! Cassis is a name for black currants. Josta is a cross between black currant and gooseberry.

i have autumn britten which is another improved autumn bliss variety. fruit are bigger and more tasty but doesn’t produce as much as bliss does. i like the fact they don’t send up as much canes so they’re easier to control.

Good luck with your raspberries.

From my personal experience, they have been tough to get going. My raspberry run looks decent now, it has 9 varieties in it, but I’ve also had 9 other plants in previous years either not sprout, or if they did, not last a year.

I tried to put them in a good spot with decent sunlight, and no low areas that collect water, but they have had a hard time getting established. Even the biggest canes are no more than 5 feet tall. I gave the patch a good dose of fertilizer this year, and it seems like it’s working so far. Lots of leaves and fruit buds and a lot of new canes coming up.

Blackberries, on the other hand, have been much better growers for me. I planted 7 Triple Crown a couple years ago, and 5 are still alive, while I planted 4 other thornless BB’s and they are still going, too. They are much more vigorous than rasps, the canes can get enormous if not pruned. But, they tend to suffer a bit more winter damage.

Thank you for sharing your experience. I’m curious how these Rhaspberries will turn out. In my memory the Autumn Bliss my mother used to have were perfect. But as a child I was of course much more focused on the berries than on the plant itself. And 5 feet seems to be a good size for Rhaspberries to me…

And I think we chose a good place for them. But about fertilizing: What kind and how much did you give them?
I have cow manure, garden compost, and an organic chicken manure fertilizer ( pellets).

Yeah, 5ft may be good, but not all are that tall, most are 3ft or shorter. They all just look really spindly, not real thick, like the blackberry canes.

But about fertilizing: What kind and how much did you give them?

I gave mine pelletized general fertilizer, it has a 10-10-10 formulation. I didn’t know the exact amount to use, but some sources said a pound of it per 10ft, so I used about 3 pounds scattered among the canes since my run is about 30ft.

I think it may have been too much as some of the newer canes look like they have a bit of a burned look to their leaves, which can be caused by too much fert. But, we have had a lot of rain, too, so that may have caused the pellets to dissolve too fast. The floricanes though, have some nice growth on them.

For your plants, I would wait a month before fertilizing your newly planted rasps. You want them to get settled in more first. But, I wouldn’t know how much manure to use on your plants. Some manure, especially chicken, can be really strong if it’s less than a year old. It can burn your plants if it’s too fresh. I’ll let someone else comment on how to use manure as fert. Maybe @moose71 could comment, since he grows raspberries, too? Compost is probably okay, if there isn’t too much.

I’ve read it’s okay to mulch the first year, but not following years as it may inhibit new cane growth, and can cause a problem with root rot of canes, especially if it rains a lot. I don’t mulch mine, which means I have to do a lot more weeding.

Bob i really think its your hot humid summers that raspberries don’t like. here we have wild ones that grow over 6ft. they thrive on neglect. i only fertilize my garden ones with a little compost covered with 3in chips every spring. last couple of years they didn’t get any fertilizer. only mulch and they grew 7ft. canes as big as my thumb. Nelson blackberries i put in last april only got to 3-4ft. and aren’t nearly growing as vigorous because they love the hot summers which we don’t have. hopefully i get a small crop from them this summer.

Thanks for the info! I’ll keep an eye on it this year, I think it is a primocane variety, but…memory lol!

In my raspberry bed, Caroline, Double Gold and Fall Gold are invading other varieties. I replanted Royalty (purple) and nursing primocanes for that and the slow-growing Jewel (black) and pulling out invading canes of other varieties. I was worried I won’t be able to differentiate the new canes between the cultivars. Interestingly, the primocane for Royalty indeed has a purple stem and the leaves of Jewel’s new canes are relatively darker. 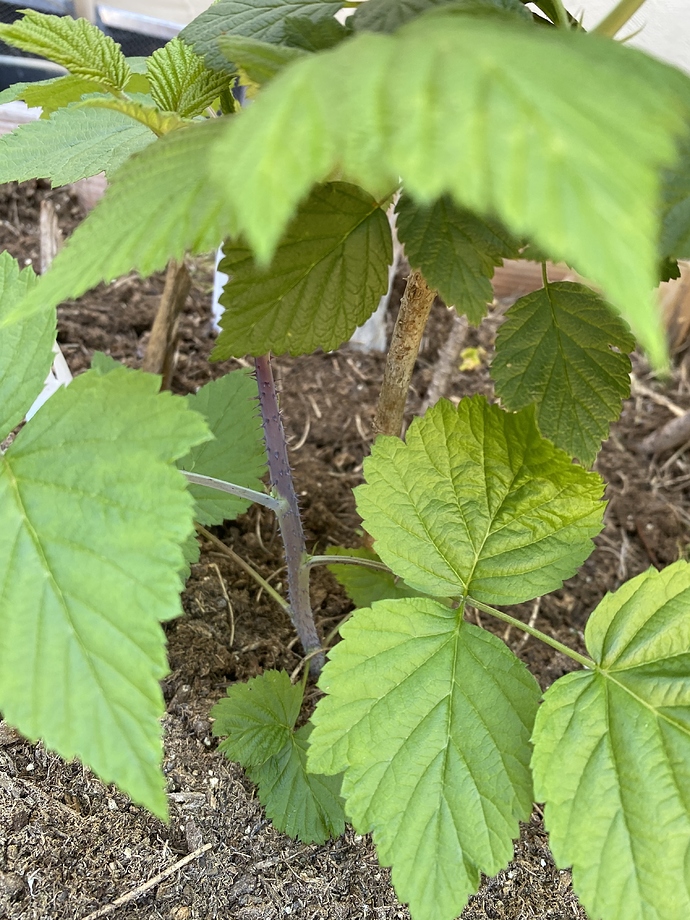 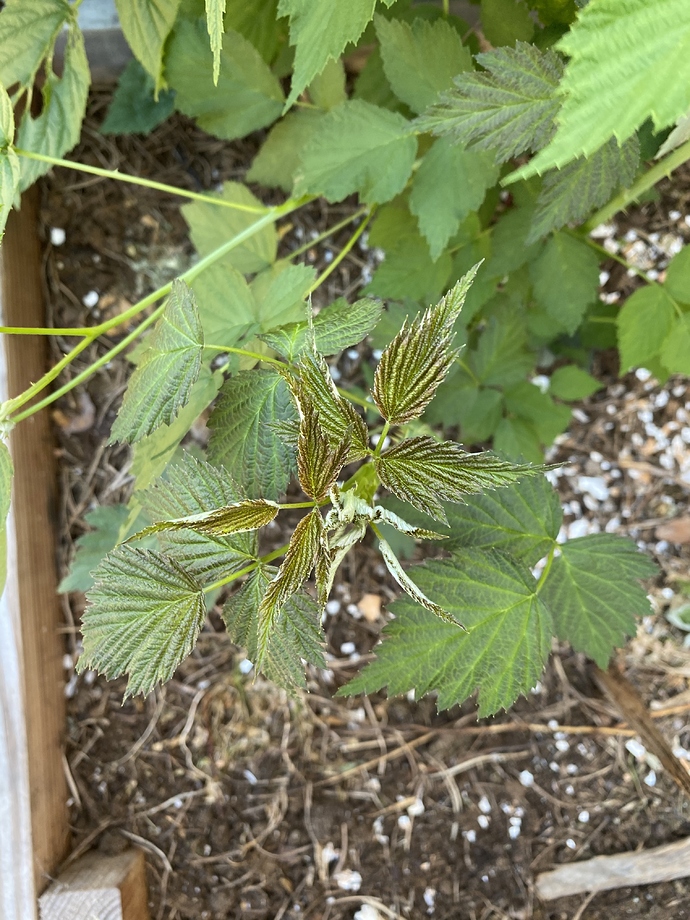 I am in inland San Diego and I agree with Californicus that the chill requirements in raspberries seem different than for stone fruit. I have a lot of raspberries that produce well in low chill areas despite not being rated for my zone. I am officially zone 10a, but functionally more like 9b.

The key for me in this climate is massive amounts of mulch that gets composted by critters into a rich deep soil that holds water yet aerates. I have never seen a variety fail that had that. The other key is partial shade. Way too much sun down here. There are definitely some climate challenges but winter chill does not appear to be one of them. Others might have more experience they can share. I know that blueberries are more “photoperiod” dependent than “chill hours” dependent. This means that so long as they can figure out the seasons, the chill does not matter as much as the photoperiod changes. It wouldn’t surprise me if that is true of raspberries, not to mention strawberries.