im in the exact opposite climate as you and a deep mulch makes for 0 maintence for me here other than the annual spring mulching . no fertilizers, watering or weeding. no mater where you live mulching is awesome.

@Drew51, and others, I’d love to hear your thoughts on fertilizing raspberry patches. I’m in my 9th season for my original patch, I have some newer patches as well. My observation is that in my older patches 75% of the canes did not survive the winter, while in my newer patches I had better than 90% survival. I always remove old canes and thin the new primocanes out.
Just wondering if others have noticed this decline or have been successful keeping an old patch productive with the proper fertilizing strategy?
Thanks!

It’s a good question. Yes I have seen about the same thing. I did revive some of it with new additions to the patch. I think you should fertilize when you can. I’m not really sure how to manage the decline either? I’m still experimenting. Most of my decline seems to be environmental. Borers, wet years, low soil fertility all seem to be factors. I’m kinda confused because my oldest patch is just fine. it’s the 2nd oldest that is in decline. I also know other growers in the state that have 20 year old patches that are still productive.

I have started using fertilizer for the black raspberry plants I have had since about 2001. I had not done any type of fertilizer up to about two years ago. I noticed the patch not thriving as much three to four years ago. I also started cutting down certain areas to start new canes. I heard and read that this helps as well. I will put more fertilizer on them this year in the next week.

The raspberry patch in the photo is about 25 years old. The 10’h Stella cherry, with multiple grafts is about 15 years old. They coexist very well together. A small amount of fruit fertilizer is applied in the late winter. The removal of dead fruiting canes before the new growth in the Spring is all that is required for maintenance. There is a large pepper tree near by, neighbors yard, the leaves are swept into the patch for mulch. I live in a mild Mediterranean zone, no harsh climate problems here. The cherry trees are covered with very fine fabric mesh to keep fruit flies, birds and other animals away. 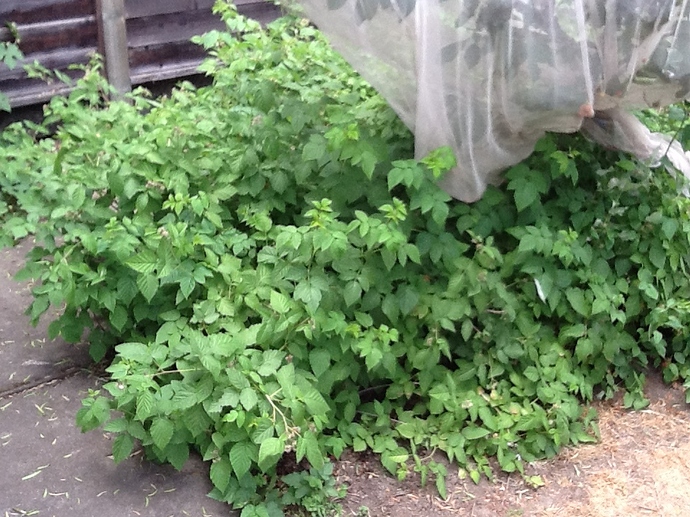 . I live in a mild Mediterranean zone, no harsh climate problems here.

I wonder if the difference is that here the canes have to go through months of often subzero temperature and they have to be optimally nourished to survive it?..

i inadvertently posted my new Ouchita Trellis in 2019 report. Finally posted and trellised my Ouchitas. Still need to weed but was proud to get them wired up off the ground. Great first crop so far this year. Any comments or suggestions would be greatly appreciated 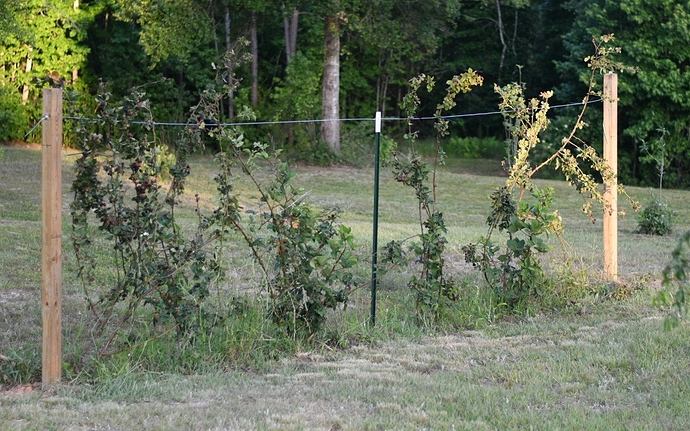 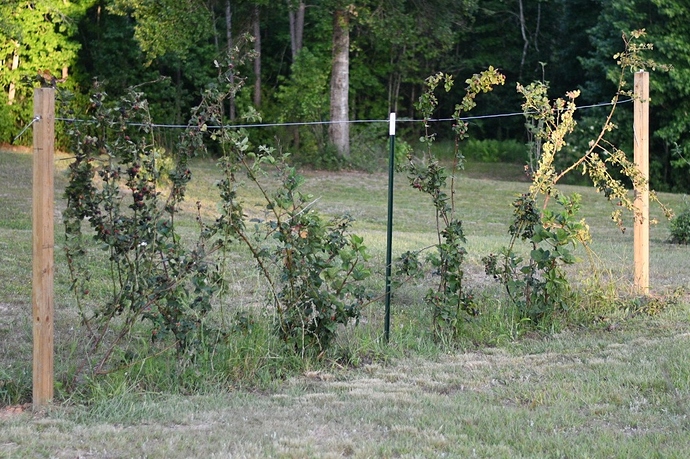 I use a similar trellis for my Triple Crown blackberries, but they are a trailing variety, so they need to be tied up.

Ouachita is an upright variety, so you might not need much of a trellis, unless the canes get too tall (over 5ft).

Some of my thornless berries (Freedom) are just starting to bloom, and the others are about to.

After I finished working on the tractor, I checked out my Seascape strawberry row that I planted out about two weeks ago. Saw that all 26 plugs have sprouted a few new leaves, so I hope they continue to do well. I want to fertilize them, but will wait about a month.

My established strawb patch continues to do well and set a bunch of fruit, so we ought to start getting a good harvest in a couple weeks. This will be our first crop of Flavorfest berries, really interested in how they turn out.

Over 5 ft. Yep. Exactly why I did the trellis. The ones on there are wired up. “Zipties” the wire is at almost 6 feet and the canes are easily a foot or so taller. Thanks…

I tip my primocanes on all my blackberries (except Freedom and Traveler) when they get to 5ft, that helps them set laterals and bear more fruit. Plus, the longer they get, the more likely they’ll fall over.

I’ll remember that. I have new growth getting 3-4 foot tall. I’ll rip them at 5 and see if I get a better crop later this year. Thanks for the “tip” LOL…

Strawberries here are setting fruit and I got no more black eye from the recent hard freeze. Covers worked!

Never could have imagined there’d be buds to damage in mid-March. 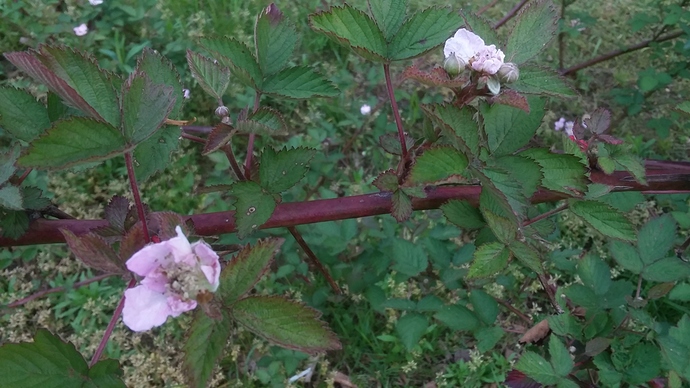 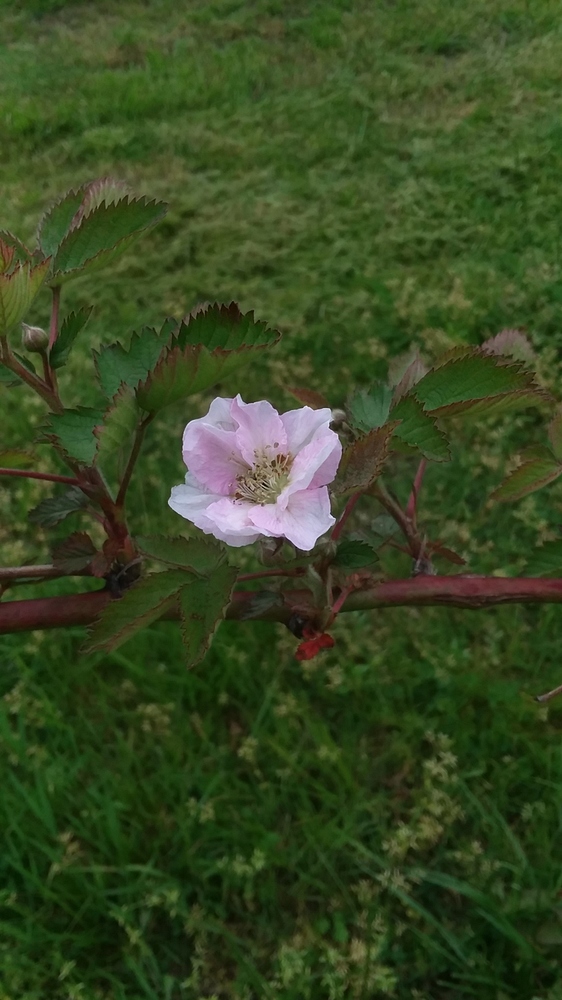 Freedom and Traveler are blooming as well.

Mine are as well, but most of my patch aren’t as orderly as before. I had a row of Earliglow and Jewel, but after two years of non-renovation, I really can’t tell which is which. Based on last year’s harvest, my guess is that most of it will be EG. It really sends out more runners, for sure.

I do have a clean row of Flavorfest, tho. There’s a lot of fruit set on them already.

I checked my Indiana Berry catalog, and typically EG is first to bear, followed by FF a week later, and Jewel about a week after that.

All are setting some fruit but Earliglow is way ahead - as it ought to be. I’ve managed to keep them in two rows, with Yambu and Scarlet mixing together. 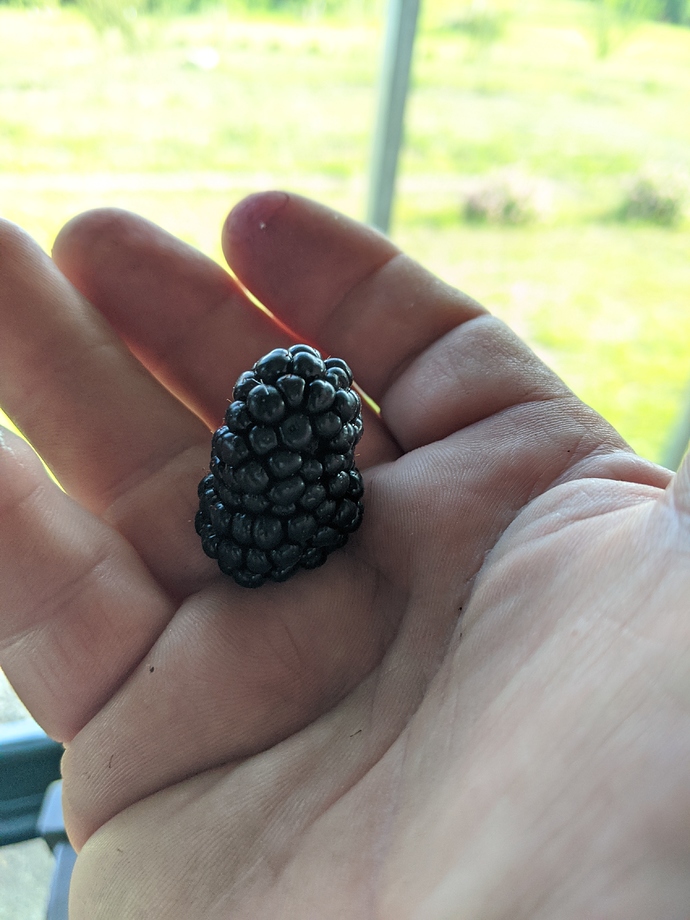 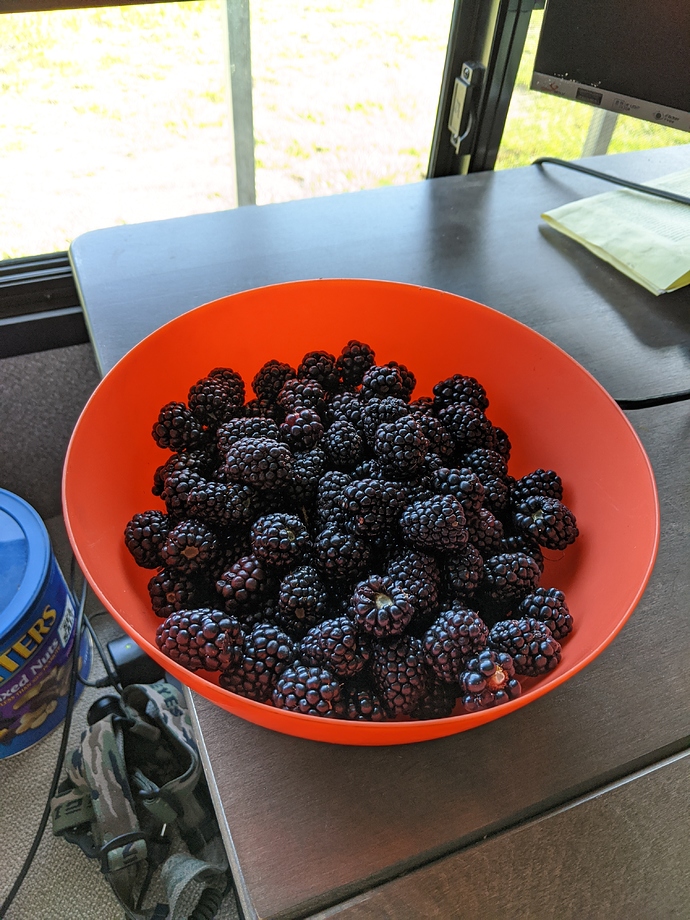 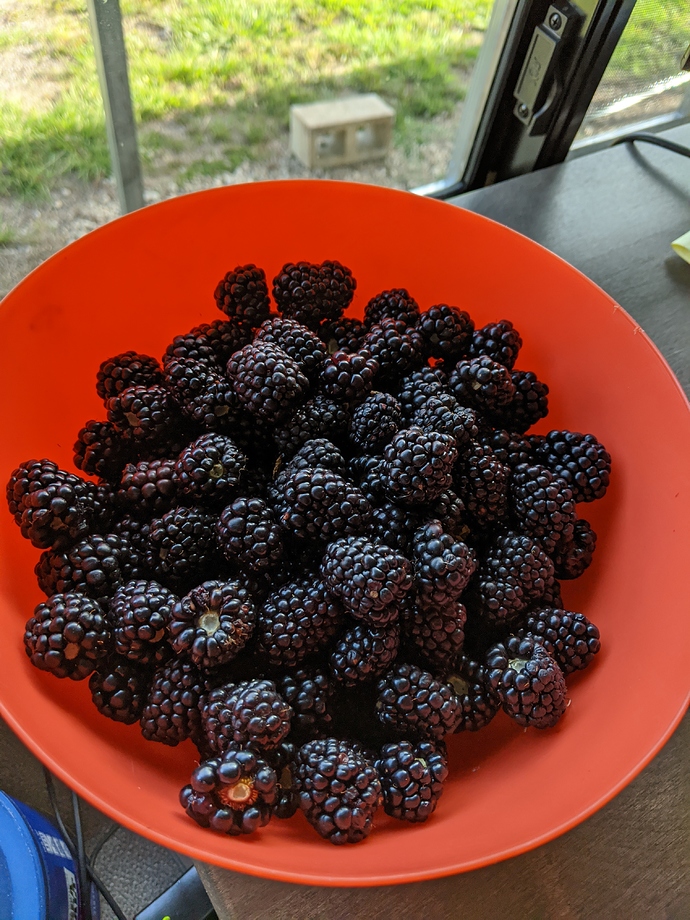 Nice harvest, looks to be a good sized berry. Are they quarter sized or so?

At least. Some bigger but a good average is quarter size. Sweet too…