Please teach me! This is exactly what I want to do!

Joking aside, there is already a lot of great grafting advise on this forum, just take time to read it. Also, many good videos on youtube.

What type of graft do you all recommend for grafting persimmons? Thanks

I did Whip/Tongue as well as chip buds. Both took without trouble. The W/T were faster to grow out but chip buds started leafing out after notching.

One of my mulberry grafts (grafted on Feb 20) leafed out and started growing but suddenly the leaves started developing pale color and one of the buds on the scion dried out. I unwrapped the graft and while there is callus formation (I think) on one side, the other side seems drying out.

Leaves on the grafted stick 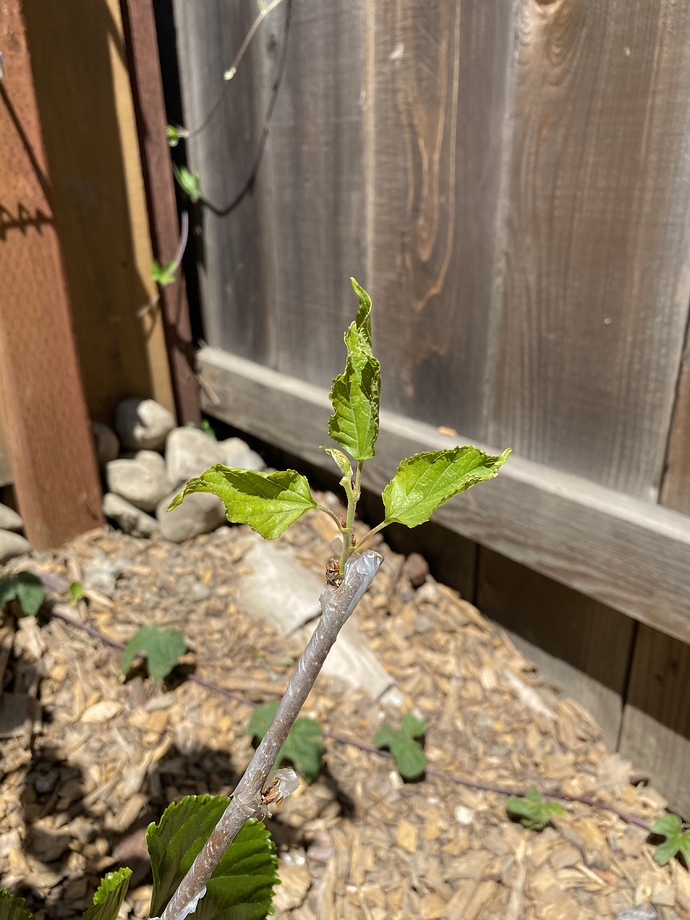 Callused part (also dried out bud on the scion) 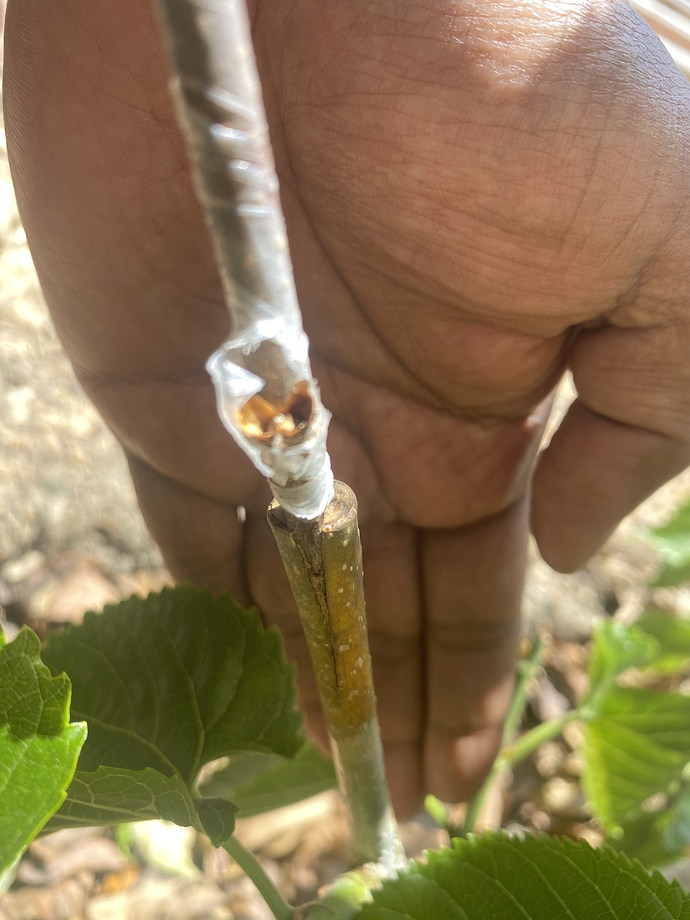 Drying out of the rootstock (on the other side)

I initially thought if I wrapped it too tight and unwrapped the splicing tape. It only has a layer of parafilm around it now. Any idea what’s going on? Am I doing something wrong?

How high above the nearest node is the cleft? If there is no leaf or bud to keep sap flowing up, the plant may decide the scion is not worth the effort. 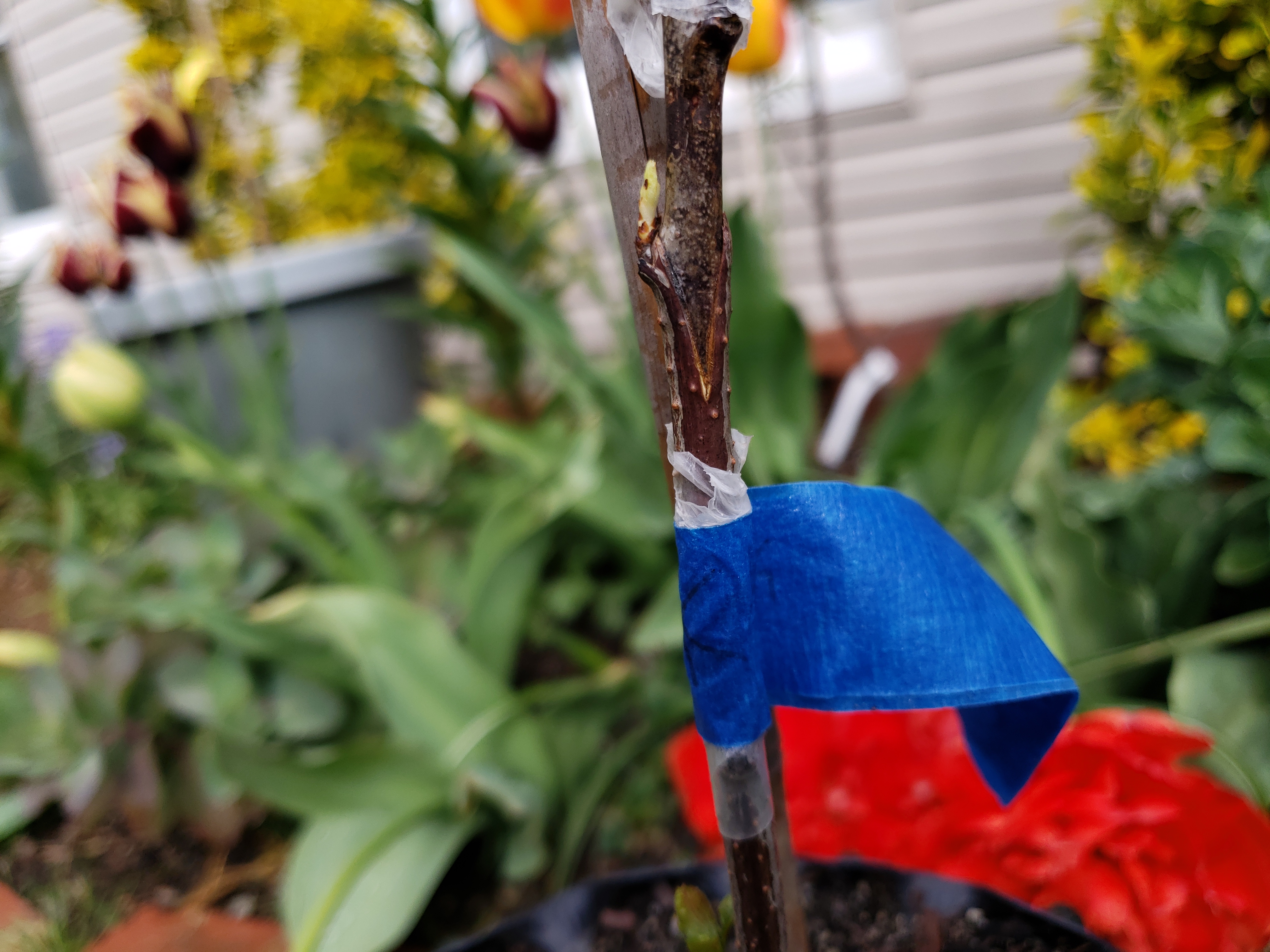 The rootstock bud at the top of the V was intentional.

I did leave 2 leaf nodes on the rootstock to keep the sap flowing. I did pinch one after the rewrapping to see if that helps.

@Cynthia912 I think you mean figs, not dogs, right?

They can be grafted to other figs, or to some other members of the Ficus family.

Thanks @ramv! I got some local american persimmon rootstock that I would like to graft .

Here are some of my grafts.

Most are apples on Bud 9 for the miniature apple tree garden I want to build. Some of the ones I thought might be too weak, I grafted onto Geneva 222 (Jonared, Pristine, Shogun Fuji). The varieties include Jonared, Summerred, Gravenstein, Winter Banana, Liberty, Shogun Fuji, Pristine, Sweet-16, Macoun, Akane, Black Oxford. I might forget one. Maybe a Airlie Red Flesh. The Pristine graft was tiny - it came from a failed graft that was holding on by a thread, that I grafted onto a branch of something else to hold it for a year until I got rootstock. I used a cleft graft for that one, and I’m happy it is growing. All of the others were whip and tongue, with strips of zip-lock freezer bag to splint / hold them together and the end of the scions wrapped in parafilm. I tried a Bartlet pear on Winter Banana on Bud-9 but it did not take. These are all in potting soil with some Osmocote. I tried Bartlet on a Chinese Haw, that is taking. Also Bartlet on a small variety of Serviceberry (Thiessen). There are also some containers with oak seedlings I started from acorns. I don’t know yet what I will do with those, I only have room for three. One pot contains ginkgo seeds, none have come up yet. 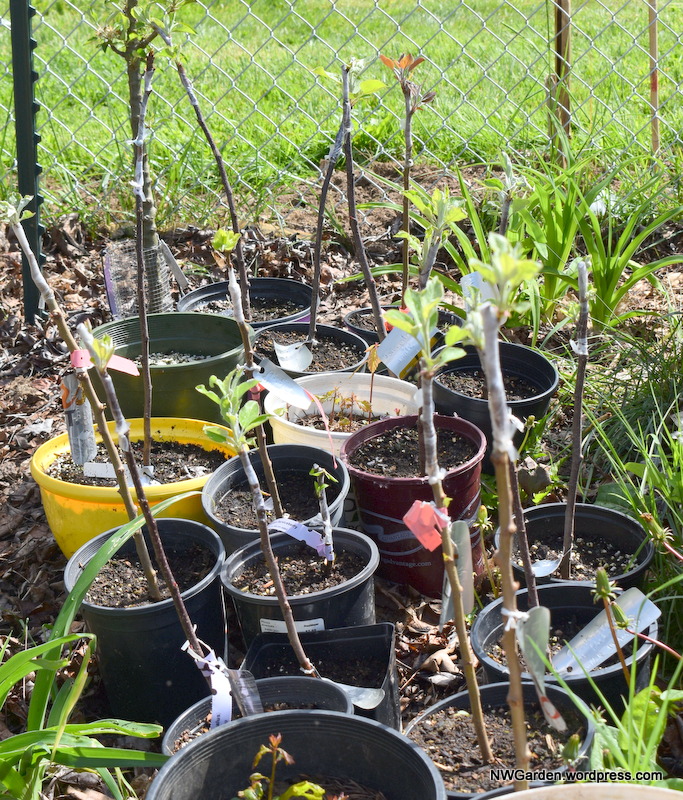 I also grafted my peach seedling onto Lovell. Two grafts, neither took. Maybe too cool here, or my technique. I might let the Lovell grow and use it next year.

I grafted my three varieties of Chestnut onto a Marissard seedling tree. Those were Marivale, Precose Migoule, and Marigoule. This tree is upwind from the other three, so should provide pollen for them and for itself. I chose these varieties because I know they grow and produce in my climate, plus I wasn’t up to ordering scion for a new variety this year. We have eaten the first chestnuts from Marivale and Precose Migoule, and we were happy with those. These grafts are kind of high. I had to stand on a ladder to graft them. Again, they were whip and tongue, with the ziplock freezer bag tape wrap. I]m happy to learn how to graft another type of tree. 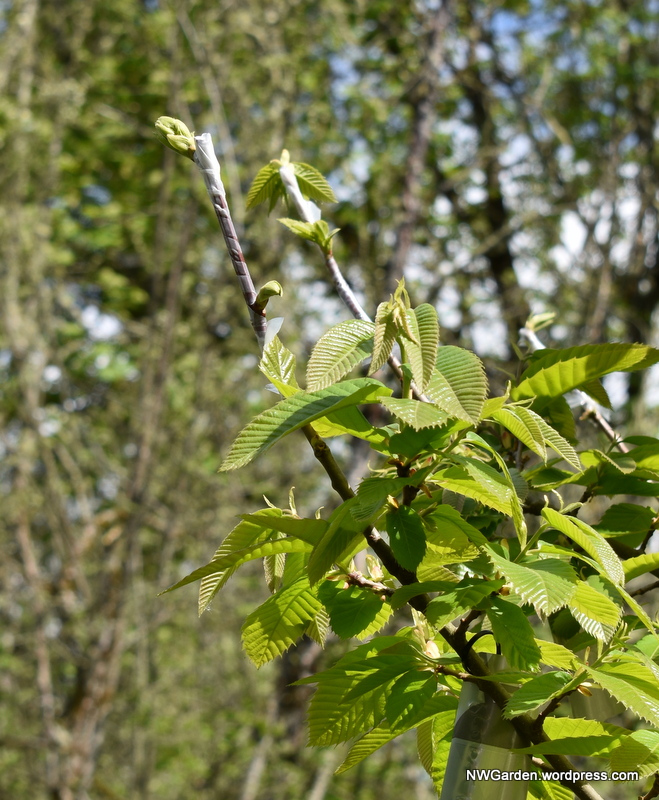 Ended up with nice strong growth on Orange Red and Redhaven, but Indian Free sputtered and I re-grafted. If there’s one thing I’ve learned so far, it’s that if the graft feels a little loose when you wrap it, it probably is. All my known failures were a little bit floppy. I thought holding it carefully in position until it was wrapped tightly would help, but apparently not… 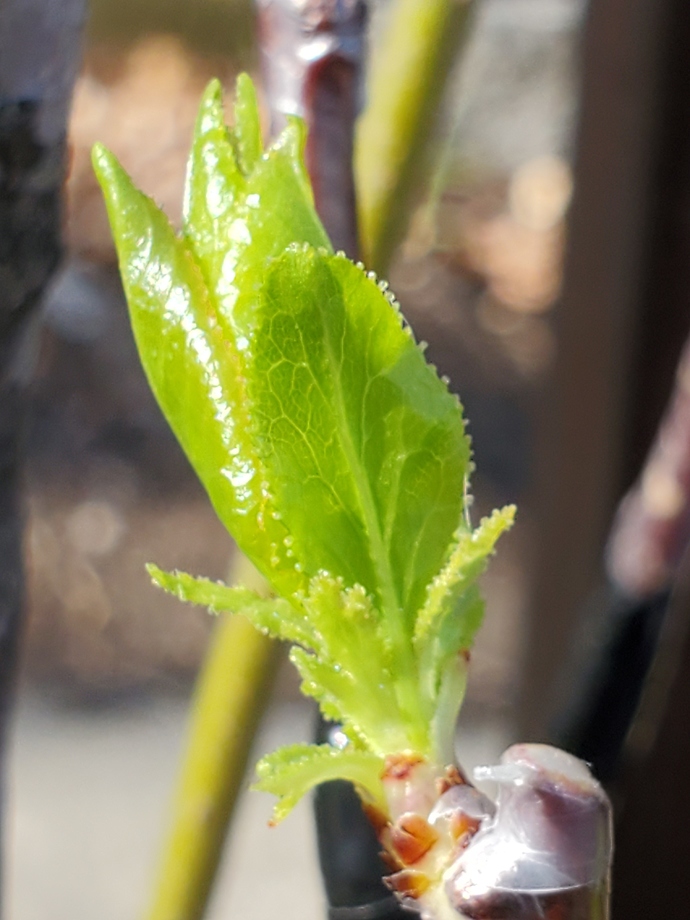 Grafted Red Haven peach, Superior plum, Waneta plum, Shiro plum all on Damson plum. (I’ve already got Toka on there and it is blooming heavily right now (with the rest of the tree barely doing anything).

I did some cleft but I tried a few rind/bark grafts as well. I still have pawpaw to graft, but my pawpaws aren’t even blooming yet.

I looked back and I grafted last year (mostly apples) on April 24th. So this year was a little later.

Grafted a few mulberries I picked up at the scion exchange at emma prusch. I was not entirely sure they would take given the mixing of alba, negra and macroura. All of them seem to have taken. The parent is probably a pakistan. The scions are wolfskill’s varieties, i stopped labeling at the exchange due to the crush of people. It’s more fun to see what fruit shows up a year or two later and then try to reverse id. 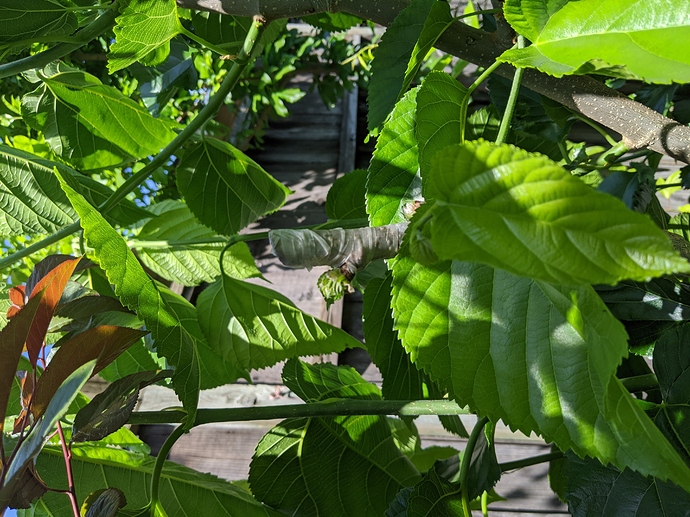 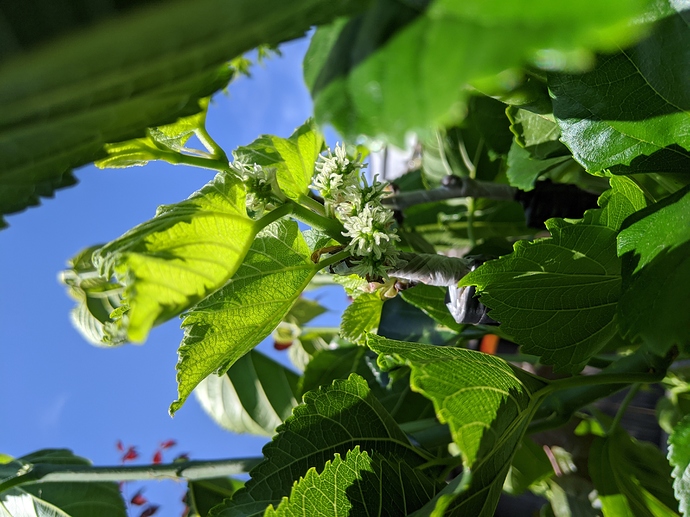 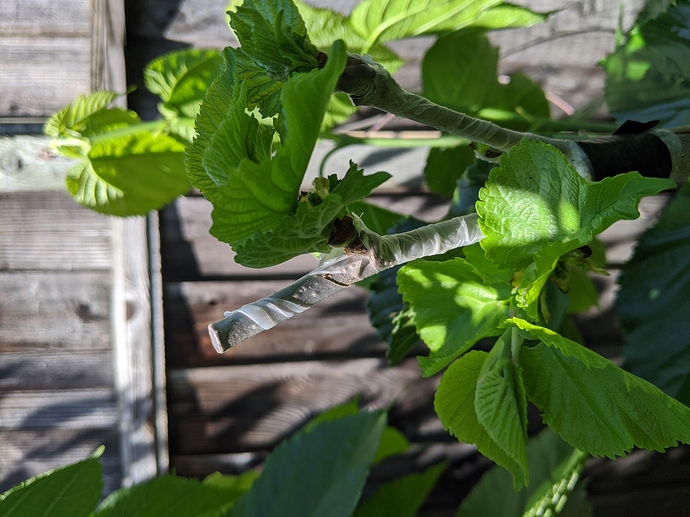 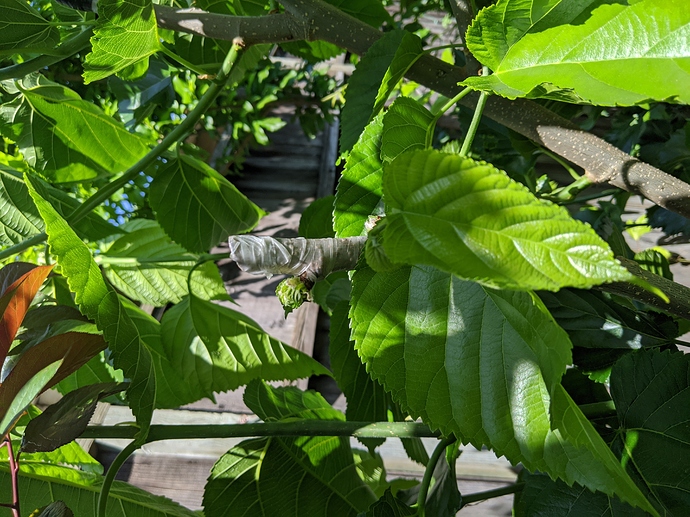 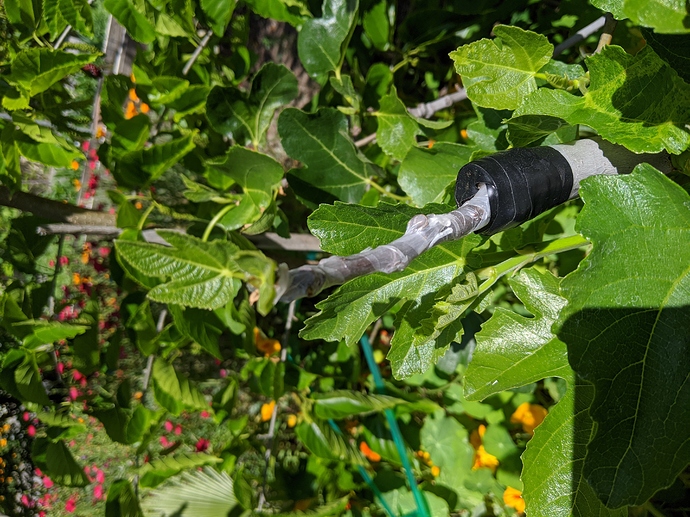 I picked up the same scions and except for one failure others seem to be ok (unless more failed later). If it helps, you can compare the fruits against mine to reverse id

Mine are grafted on Pakistan as well

Trying to turn a bug into a feature. Grafting w/t, I still sometimes get a little flap at the end of my cut. If it doesn’t otherwise interfere with a good match, I’ve been keeping it and scraping away the bark where it will overhang to hopefully get more cambium contact. 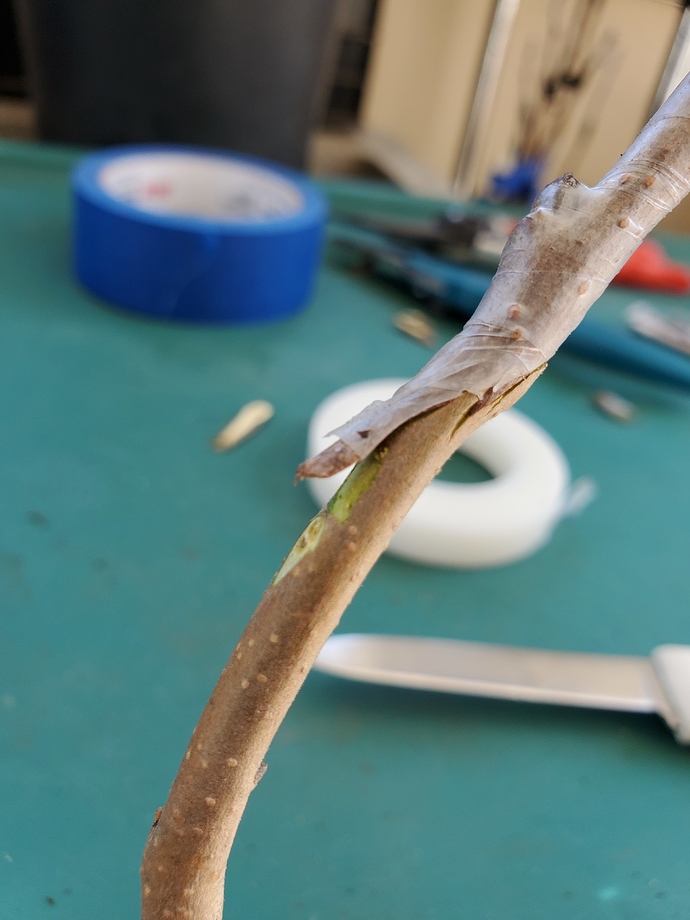 Looks legit! I make very long, narrow cuts to increase cambium contact and it works great for everything.

Your knife might not be sharp enough. I usely take of a sliver of the sides of the sion before closing of the graft, especially with cleft/bark grafting.

I had just sharpened it to a smooth shave, and I get flaps on maybe 1/5 on tougher woods like pear or persimmon, especially on short pieces where I don’t have the same leverage or control. I know what you mean, though! When I was practicing this winter, I thought I was getting hopeless. But my ‘skills’ improved markedly when I resharpened the knife. I guess I had done a lot more practice cuts than I thought!

I get that too, especially when the rootstock or the scion is crooked. I could probably avoid my mistake and even use it to my advantage, but I’m just not seeing it right. The other issie I have is making the tongue cut parallel to sticks. Once start the cut, the blade wants to work outward towards the bark. Does anyone have any suggestions to improve my technique, or is it mostly informed by practice?