Advice on starting an apple frankentree

I’m hoping to get some advice from you all on starting my first frankentree.

I’ve been subscribing to a one tree = one variety philosophy in my apple growing this far, but it turns out that I’m running out of space before I’m running out of varieties that I want to try growing. I underestimated the fun of grafting and collecting varieties… and my plan to solve the problem is to start a frankentree as a place to try new things and maybe down the road to fruit varieties if I start growing seeds and doing some crosses. Here are some considerations:

I’m seeing a few basic options of how to approach this, that I’ll outline below, but I’m sure there are others as well. Please let me know if there’s another option that I’m not thinking of:

I really appreciate your time and help! Any and all advice is welcome with regard to starting an apple frankentree. Please feel free to go beyond just tree structure… I don’t know what I don’t know! 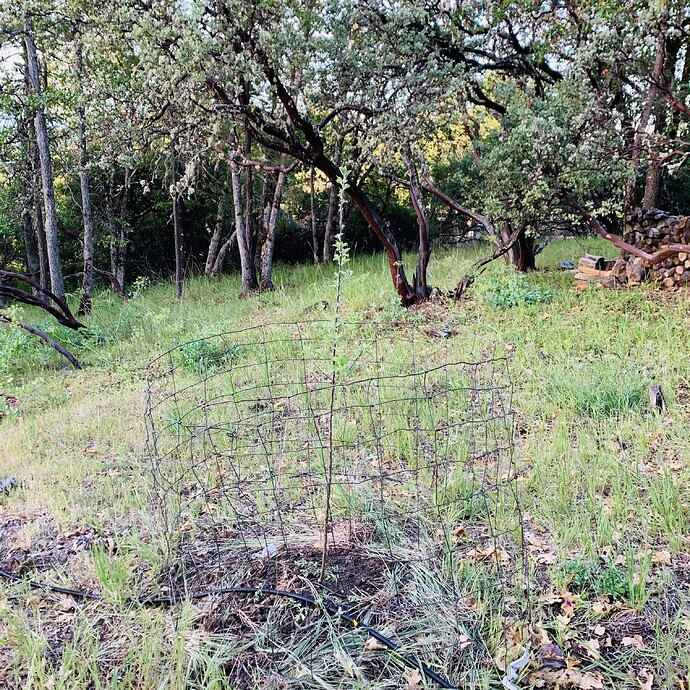 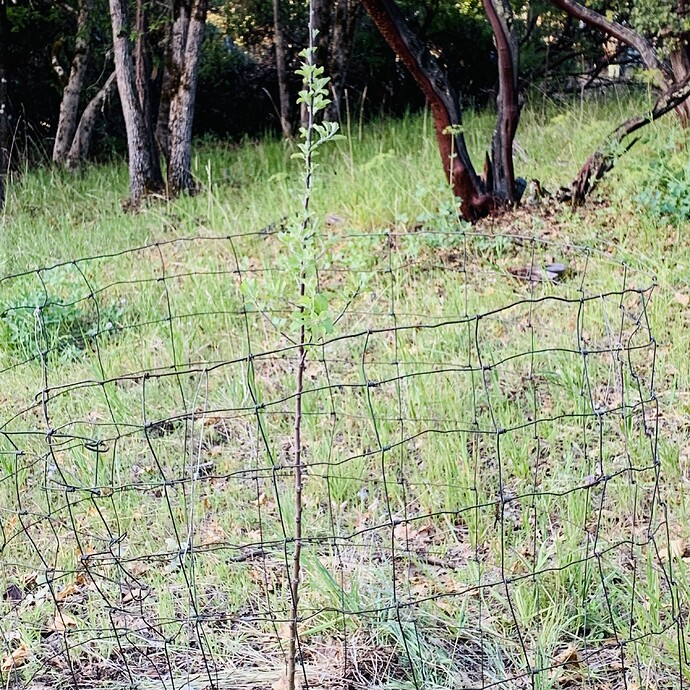 Any of those options will work, and short of trying them all I don’t know any way to know!.

My own frankenapple is on some unknown semi-dwarf and it’s a mishmash of this and that stuck on here and there. No real rhyme nor reason. But that’s OK, because it gives me lots of reasons to fuss with it, and I get a pretty good crop of Liberties in addition to quite a few decent varieties.

But if I had it to do over I guess I would cut my new whip at waist level (trying to get above the deer) and graft a vigorous variety to it right away, hoping it would produce at least four feet of growth and three scaffolds. Keep one scaffold unchanged and graft onto the other two, and graft variety number 4 to the top. Repeat until the tree gets too tall. Then if you want to framework onto one of your varieties down the road there’s nothing stopping you from doing that too.

Good luck, have fun, and start looking for room to stick more trees!

Thanks for the great response! I appreciate your perspective around the idea that the frankentree can serve its purpose and be a lot of fun despite being, and even because of being a “mishmash”… it’s probably not even possible to avoid some amount of messyness when I get enough varieties with different habits going on there.

Great idea to make a higher graft to maintain the benefit of the height that has already been achieved but also to get a fruitful variety going earlier.

Don’t make my mistake and graft too high. For fruit above deer browse I think you want your first branches around 3 or 4 feet high NOT 6 feet or more

The fruit are a couple feet higher than the first branch off of trunk.

I would graft a variety at About 3inches from the ground.
Let grow as your trunk , other varieties can be added in time.
I say this because m111 is bad to get bur knots ,I would not want more than a few inches of M 111 above ground.
It’s a good rootstock , but not a good tree trunk

Thanks @murky… I was just about to ask about height for the first branches for deer safety without starting any higher than necessary… 3-4 ft sounds like a good range for the lowest branch. With 6 or so vertical inches between branches hopefully this will put the first tier in the right spot.

Thank you very much! I hadn’t even taken Burr Knots into consideration… I definitely don’t want to be fighting that all the way out all of my scaffolds!

Good advice from @Hillbillyhort about the burr knots on M-111. And with such a nice looking rootstock growing like that already, it should grow like a rocket.

m111 is bad to get bur knots ,I would not want more than a few inches of M 111 above ground.
It’s a good rootstock , but not a good tree trunk

I came here just to make sure somebody said this.

Do you consider bloom times? with other polinators not likely a problem. But spraying could be tricky?

Props to you for putting some planning into the process. I keep telling myself I will pause grafting for a year and let the branches grow out. But in the end grafting addiction overcomes me, and I end up grafting a new variety on almost every suitable site every year. My frankentree is about 3.5 feet tall, and has 15 varieties on it.

For what it’s worth, it is on M111 rootstock with Gravenstein as the trunk. There was no particular thought behind that choice; just that I liked Gravenstein and used a Gravenstein bench graft as the start of the tree.

It’s a good choice, though - a triploid like the Grav produces a strong framework quickly.

@Hillbillyhort @jerry @JohnnyRoger @aiden… thanks to you all for the burr knot/m-111 advice. I think you guys really saved me from a big mistake there. Sounds like a low graft union is definitely in order.

Unfortunately, I’ve already grafted all of my dormant wood elsewhere (with the exception of some golden russet wood, which seems to be universally thought to have a less than ideal growth habit, and I would assume would be a bad choice for my trunk/scaffolds) which leaves me thinking that I could either try budding another variety that I already have (my first attempt at budding), or let my whip develop a nice root system this year and graft it over next spring. I’m thinking that the latter is the way to go… it may set me back a bit, but then I can select a good vigorous variety as the trunk/framework of the tree. Maybe a triploid like Gravenstein (thanks @CA_Poppy and @jerry).

I was reviewing this link from @scottfsmith on the vigor of various varieties… very helpful. Estimated Tree Vigor For Apple Varieties from HOS

It looks like the most vigorous variety that I’ve got on hand is Wickson Crab, so that would probably be the one to use if I was going to try to place a bud down low. Any input on whether doing that, and then forcing the bud after it heals, saves me much time (meaning total time to get to a good framework for grafting) vs just grafting it over next spring?

Good point on considering spray times in terms of various varieties. I think that I am fortunate in my area in that the main pest I need to spray for is coddling moth and the first spray isn’t until well after everything is done blooming (mid to late may).

I’m in southern Oregon zone 8a/b. Please let me know if you have any other thoughts around spray times and having a mix of varieties/bloom times. I suppose one could try to group varieties of a certain bloom window together on a given scaffold… though I’m not sure it would help with the spraying as the stuff tends to go everywhere, but it might make for an interesting look during bloom.

Any input on whether doing that, and then forcing the bud after it heals, saves me much time (meaning total time to get to a good framework for grafting) vs just grafting it over next spring?

For whatever it’s worth, I’d probably wait and graft a vigorous triploid (like Gravenstein, Stayman, Spigold, or Karmijn de Sonneville) next year rather than budding Wickson now. With another year of root system development, you should see very rapid growth on next year’s graft. Wickson would be a good addition later on.

I think Jerry’s advice is sound regarding grafting any of the four varieties he listed as the base variety to later build from. I’ve got many multi-grafted trees in my orchard. Two of the best are Gravenstein on M-111 and Karmijn on G 30. Both are 10+ years old, are excellent growers, and provided nice frameworks to graft to, as is Stayman, though it’s much younger and I’ve only attached one additional variety to it.

I wouldn’t dismiss Golden Russet, as it is also quite vigorous. It’s easy to establish a framework to graft to with it. The less desirable growth qualities manifest in later seasons as you attempt control it’s tendency for leggy, vertical growth and balance that with production, since it produces a lot of its fruit on tips.

If you’ve already grafted GR elsewhere, you don’t have to worry about keeping a scaffold of it on this tree and try to keep that in balance with the rest of the friendlier growing varieties you attach, so why not stick it on your M-111 now and get a head start on your frankentree this year? Next spring you can graft all of the scaffolds you hopefully get started this year rather than having to wait an additional year were you to lop the rootstock off next spring to graft one of Jerry’s excellent suggestions.

I just completely top worked a nice looking Golden Russet heading into its 3rd leaf to five new varieties this spring after deciding I didn’t need a second tree of it (it has been a disappointment in my orchard for the past four seasons after producing nice apples the first time or two it fruited). It was a great looking, balanced tree with four large, evenly spaced scaffolds and a tremendous central leader to graft to.

Thanks @jerry and @HighandDry for the the help with this project. Great variety suggestions and also the clarification on the actual issues with Golden russet is very helpful… sounds like golden russet could be a good choice after all and I definitely like the idea of getting things going sooner rather than later

like others mentioned you want to graft the MM111 low to avoid to much burr knot problems.
Although i think a high vigour variety as a stem builder is nice to have.

You might get those diseases naturaly or might even graft a diseased scion.
And loosing a limb on a frankentree and thus all the collected varieties is gonna hurt a lot.

as far as grafting now vs grafting later. I don’t think there will be a huge difference. But if you can source a good variety with a dormant bud id chip bud or T-bud low on the stem. And see if it is healed in ~2 weeks. If looking good, then prune off the rest to force it to grow a new main stem this season. You could even temporaraly remove the growing tip, to make the tree temporaraly slow down growth a bit to save up for your graft taking.