I recently had the chance to visit Edible Landscaping in Afton, VA for their Fall Fruit Day! The place was beautiful and it was amazing to see all the different varieties and taste some unique fruit. Owner Mike McConkey was kind enough to pull out some persimmons from their freezer for us to try. Got to try the American variety Weber along with two Asian varieties, Great Wall and Giombo. We really enjoyed the taste of Weber. The closest descriptor we could come to was rum and raisin ice cream, which I grew up eating all the time.

I am looking to plant two American persimmons in my family’s yard and was wondering if anyone has flavor descriptors for the following varieties: 100-46 (Lehman’s delight), Prok, H63A, and WS 8-10? Or does anyone have a favorite they recommend? Looking for something with good size that has a nice sweetness with a more complex flavor, because we definitely preferred the taste of the American varieties when compared to the Asian.

Thank you all for the help!

H-63A has something extra added to its flavor. It’s the best American persimmon I’ve tasted.

100-46 is large and simply excellent. Sweet persimmon flavor. Most persimmons are very similar in taste.

I’ve only gotten to taste a couple fruits of Prok so far, but my impression so far is that the flavor is perhaps milder than other American persimmons. There was no remaining trace of astringency or any other off flavors, and they seemed just as sweet as any other American persimmons, and the size was very large, and there didn’t seem to be very many seeds, so it seemed to have a lot of good traits but maybe not quite as rich and full a taste as the random wild persimmons I’m used to. Perhaps all these selected varieties would compare similarly to the unselected persimmons I’m used to. Can anyone with more experience confirm or correct my initial observations of Prok?

When I posted this I had not yet had the chance to visit Englands Orchard, but having gone there now, I can report back. Our favorite American persimmons of the day of were WS8-10 (Barbra’s Blush) and H63A (sold as Prairie Dawn from One Green World I believe, but this should be double checked). WS8-10 had a very rich, almost citrusy flavor, while H63A had an almost caramel-like sweetness. We preferred them to the mild taste of Prok. So thank you for the recommendation @Harbin! You were right on.

NB-02 (Zima Khurma) was also an excellent hybrid, with a large, very sweet fruit. I only got to taste one, but I was impressed. Our favorite of the day was Kasandra, another hybrid – I went in thinking the more “American-tasting” persimmons would be best, so it was interesting to see how Kasandra was tops for us. Kasandra also holds its fruit like Rosseyanka, a quality which we liked.

If anyone is ever able to, I highly recommend making the trip to Englands Orchard in September when pawpaw, persimmon, and jujube are ripening. Cliff was such a generous host, and it was nice to taste things and get his advice before planting them.

interesting thread, clearly I need to look at adding H-63a and WS8-10. I actually had 2 WS8-10 grafts fail last year, but the rootstocks I had were skinny. like victorias secret model-skinny.

I think that Barbara’s Blush is currently the best american persimmon - certainly Jerry’s best (you wouldn’t call it after your wife if it wasn’t exceptional). It has it all: good size, great taste, good looks and what’s important - it ripens up the whole crop in cooler regions.

Does anyone know when Barbaras blush WS-810 ripens compared to others?

@Harbin lives in the CZ Rep. where he has a very long, growing season. He’s talking about the third week of October.

‘Deer Magnet’ has the longest lasting persimmons while staying on the tree far into the winter. You could be eating delicious persimmons during December & January with a foot or more of snow on the ground, at least here you could. That’s a pretty cool image. Flavor of Deer Magnet is very-very-good.

Barbra’s Blush so far has two people saying it was the best American persimmon they had tasted. @harbin is one and another is a member that visited Cliff England. It’s one I haven’t tasted. It came as quite a surprise to Jerry Lehman when I told him that two people said it was their favorite . . . Jerry was shocked. I know he was thinking 100-46/Lehman’s Delight was his favorite.

It is congruient to say that both of the people said next or second place was H63A. That was my favorite as I await to taste a Barbra’s Blush next to a H63A.

Tony and I pretty well agree that ‘Morris Burton’ is sitting up there with H63A & Prok but I don’t know if @tonyOmahaz5 is harvesting WS8-10 / Barbra’s Blush.

Do they need heat during there ripening phase or would good heat into september work for both, I really only have space for one and my last one my dog removed in her vigorous attempt at squirrel control (then it winter killed). I would love one with more flavour over sweet and would like one that is non astringent when i consume it. My main goal in addition to fruit is they are amazing nectar producers for pollinator insects.

Maybe i am just thinking of Barbarella!

@harbin is one and another is a member that visited Cliff England. It’s one I haven’t tasted. It came as quite a surprise to Jerry Lehman when I told him that two people said it was their favorite . . . Jerry was shocked. I know he was thinking 100-46/Lehman’s Delight was his favorite.

I stand behind my claim growing Barbra’s Blush aka WS 8-10 side by side with Lehman’s Delight. Barbra makes larger fruit and fully ripens here - juicy with exceptional taste . Lehman’s Delight is not bad either but always with a trace of astringency…never ripens the whole crop. I got both of them directly from Jerry Lehman. Incidentally he often mentioned that the best tasting american persimmon is Early Golden. As much as I respect Jerry I cannot agree with his taste buds.

@RichardRoundTree I think you should go with Barbra’s Blush. You’ll get Denver’s urban heat and you’re up to zone 6 from it. That’s a good climate to grow a lot of different genera.

Thanks Dax, The descriptions of that one do sound really great. I was looking through that thread and could not seem to find when H63A is ready, it seems Lehmans delight 100-46 and barbras blush are both mid october for us?

I would have said Prok but you might get seeds. Some people report seedless Prok w/a single tree while others get seeded Fruit. You’be end of August/Sept. with it. Prok is no slouch for taste or size.

Here is 100-46/Lehman’s Delight on Sept. 18th a few miles away at Red Fern Farm. I live in Mercer County IL. He’s across the Mississippi River in a direct line. He said it ripens every year there. Now this is mid-west heat man! 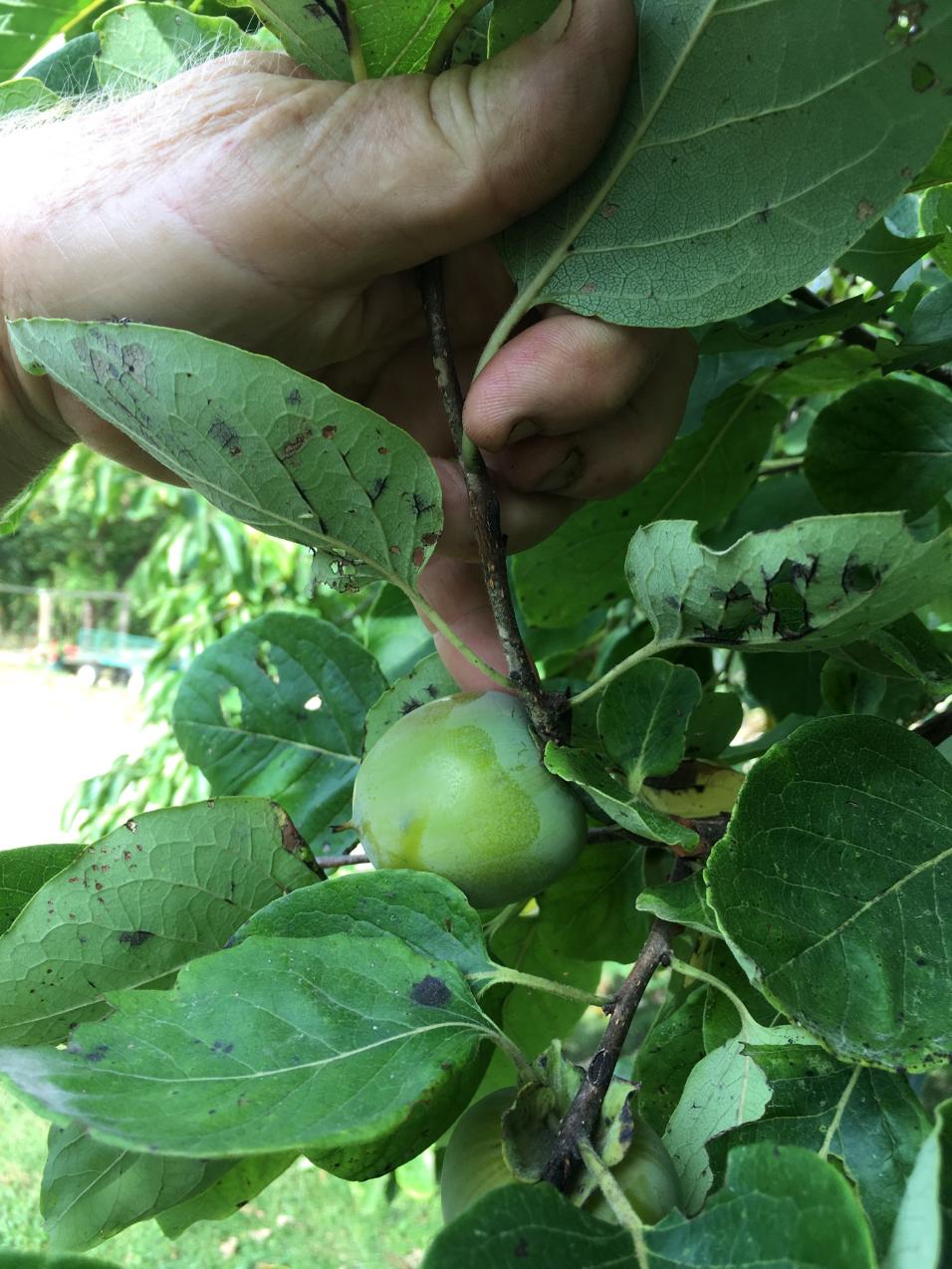 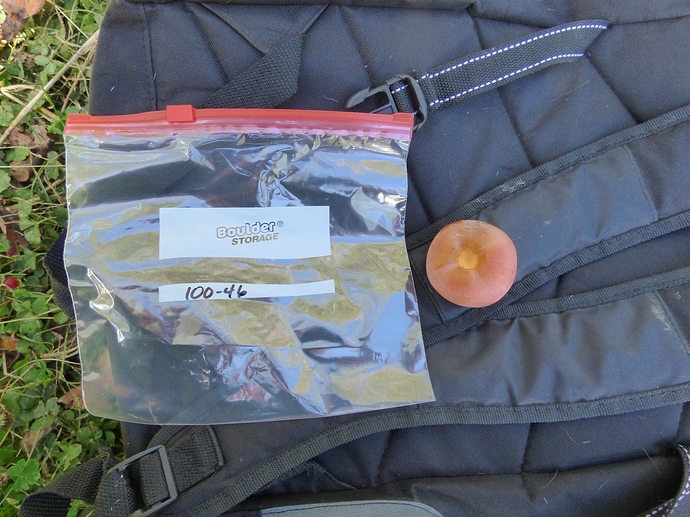 I’m telling ya, all the trees were full of fruit on this day. Prok I didn’t get to taste until I went to Red Fern Farm. I had missed its’ window in Terre Haute. 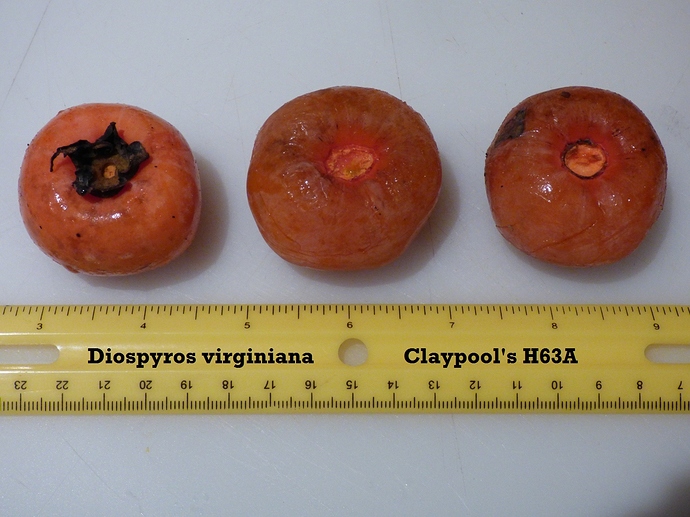 Gotta go with your gut, man.

Plant them all. It’s good for the climate

You could size control them and it gives you a backup in case one fails later. You mentioned that one winter killed. What size was it? Was it temps or dry soil?

I thought about Prok for its early ripening but I really am looking for flavour over sweet and i got the impression that prok is sweet like a asian persimmon with a slight bit of american flavour? I have not really been a fan of the asian persimmons i have had but i probably have only had unnamed fresh asian ones(CA), wild ones (Mo) and grocery store asian persimmons (my least favourite).

Thank you for those pictures as that gives me a excellent idea of ripening time and they look delicious.

Well there was a lot of dumb things done in my yard, the area i have cleared them out of had several layers of plastic like 1’ to 2’ underneath the dirt and it was an area i needed to remove a diseased elm tree a ash tree and many “tree of heavens”. Everything was crazy uneven and it was all slanted into my neighbours yards so i lost all my water, i have done extensive work and created a sort of swale and more planting area now. So i had this 5’ section against my fence where nothing would really thrive and all my flowers were having issues as i removed the trees of hell I found the deep buried plastic and then had to remove it all. Its pretty anaerobic clay in this part and i spent a year after tilling everything up and warring the Tree of hell a year of cover crop did the ground good and my raspberries started living although needing much more water than the other ones as well as all my perrenials finally took hold (surviving and growing) the next year I then planted the American Persimmon, I wouldn’t say it thrived but it seemed to do pretty good for its first year. Sadly my dog snapped it clean off but above the graft union (nice grafting!) however I would still think this could be fatal in mid winter as it was around 10" tall so regular die back could have killed it to the graft. I did winter water the area but with the raspberries only coming back with mid vigor last year and not tons of babies i think the clay dried out or resisted water and it needed more. The rootstock definitely died also, So i feel i did two things that would kill it sadly. I have about a 6’ x 14’ space that i was going to put 1 honeyjar jujube and 1 AmP in. I have one more space that after i remove a 6’ wide tree stump, i will have about 11’ of space and i was going to put a dwarf A.Pear Drippin Honey i will graft (using a pot so i can A bring the graft inside for cold and B not force myself into a bare root plant where i have a 20+hr workload before i can plant it) So while its par for the course for me to order one for that space i am concerned about potting it up (will AmP take this?)

Another option could be to plant a couple seedlings (or even seeds) first, get some growth and establishment first, and graft later. Or you could experiment and do all of it to see what gives you the best survival at your spot

I don’t know that potting an American would work as well long term but maybe some are doing that.

Im open if someone has some good seeds of a potential cross, i always love expanding the gene pool and i am slightly concerned that they would need the same amount of water as paw paws (which i am 100% unable to keep watered even when i shade them from all the extra UV we get).

I’m in a similar boat with pawpaw. Drying winds beyond dry soil make it tough. Persimmon have been easier for sure. Persimmons can develop a taproot and I’ve had better luck with trees that do that.

I thought about Prok for its early ripening but I really am looking for flavour over sweet and i got the impression that prok is sweet like a asian persimmon with a slight bit of american flavour?

I sure hope it’s a bit better than sweetness with “just a bit of American flavor”. I have a Fuyu and a Hachiya. I read American persimmons were quite a bit different and that Prok would be a great one.