These guys are sweet and fragrance and nothing like Asian persimmon. Very unique flavor. 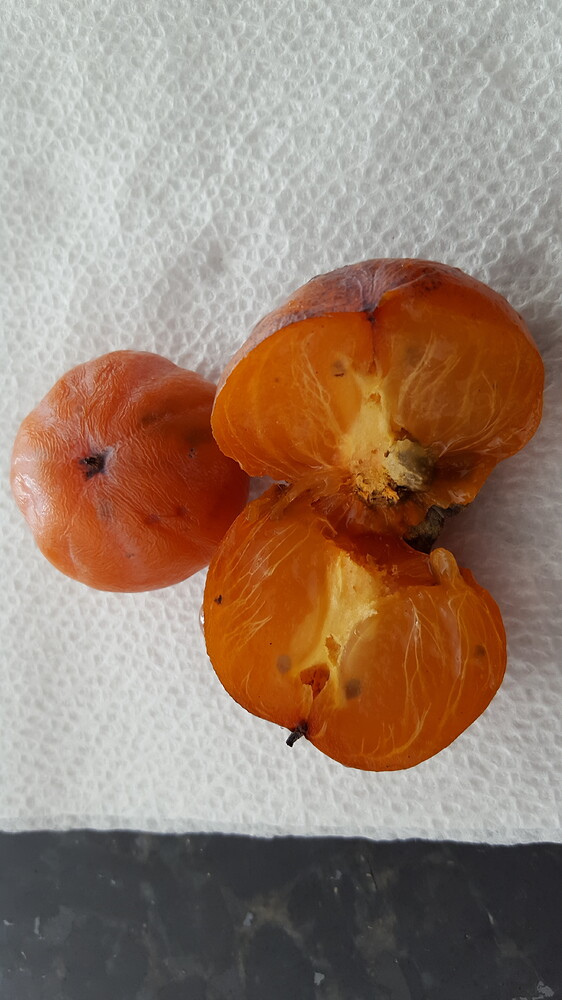 Those have the look of being very sweet. I’d love to taste those just to see how they compare to my Asians.

Tony,
Those look delicious. What is the variety? Can you measure its brix?

Tony,
How you grow the stuff you do in this area is nothing short of amazing to me. Please let us know the variety and I will give it a try. We are just several hours apart but I suppose sometimes that can be a lot. Thanks

Those persimmons sport a very sugary looks, Tony! What variety are they?

This is Claypool H-118 variety that Cliff England can graft for you at England Orchard in KY. The fruits were fairly good size for an American persimmon at 2" on average. Nice color, sweet, fragrance, seedless, and self-fruitul. If you want to plant some American persimmon, the three good choices are Prok, Jerry Lehman 100-46, and Claypool H-118. All three trees produced fruits greater 2" and tasted good too. 100-46 fruits were bigger than Greatwall Asian persimmon that Creekweb posted in the old Gardenerb.

Looks great, good to know it’s self fruitful. Do you have a male?

I don’t have a male persimmon so all my persimmon fruits are seedless.

I guess i dont understand persimmon polination.
I had a wild tree that never flowered so, i grafted it over. It flowered but did not set any fruit. I put in a order for for several american and asain persimmion hoping for polination

Persimmon pollination is a bit fuzzy. In general, American persimmons are dioecious with some trees male and some female. Male flowers tend to be small and grow in clusters and female tend to be larger and grow more individually. Some trees called “perfect trees” produce some branches with male flowers and some with female flowers.

There were some varieties like Meader thought to be self-pollinating. By that I mean the a blossom can pollinate itself. I believe this was originally thought to be the case because there were no male trees in the area where Meader was growing yet it produced fruit and the fruit was seedless. I think they have since found that if flowers are bagged, they don’t produce fruit,

Some experts have theorized that pollen from other trees (chestnuts) or some other particle with the right physical properties causes the female flower to believe it has been pollinated but since whatever triggered fruit production is not genetically compatible, no viable seeds are produced.

There are also two strains of persimmons, northern (90 chromosome) and southern (60 chromosome). Similar things happen here. While 90 chromosome persimmon scions can easily be grafted to 60 chromosome rootstock and vise versa, they are not generally genetically compatible when it comes to pollination. Pollen from one strain will cause the other to fruit but the fruit generally dose not produce viable seeds.

Persimmons are usually insect pollenated. So, if you live in the native range of persimmons, it is likely there are male trees that you don’t know about being visited by the same insects visiting your persimmons.

Also keep in mind that self-fruitful can mean that a dominantly female tree produces a male branch. Here pollen is moving from a male flower to a female flower on the same tree.

I have not looked into Asian persimmons enough to know the specifics there, but the above is my best understanding of American persimmons.

Great post Forest and Farm. I have to say that while I like Asian persimmons, the Americans have such a complex and interesting flavor that I greatly prefer the Americans. My Szukis does a great job of pollinating my Garretson and Early Golden, but they don’t currently pollinate the Szukis. They were pollinated earlier when I had European chestnuts, but now I only have Chinese chestnuts and the Szukis produces no fruit. For me, Asian persimmons are a nice fruit, but American persimmons are one of my favorite fruits. I think Tony should write a book with what he’s able to grow.
John S
PDX OR

Lucky has told me that the chestnut theory has been pretty much debunked, FYI.

Quite possible. Last I looked into it was over a year ago. That was the expert speculation at the time for the cause. I think “fuzzy” is a good description of our detailed understanding.

Just found a heap 'o simmons flopped unceremoniously all along the side of a busy road and residential lawn in downtown Silver Spring, Md.

These fell off a pair of trees I suspect were named cultivars purposely planted once upon a time. These were delicious! Better than any wild native persimmon I’ve had to date. Yes, I washed them thoroughly before eating. 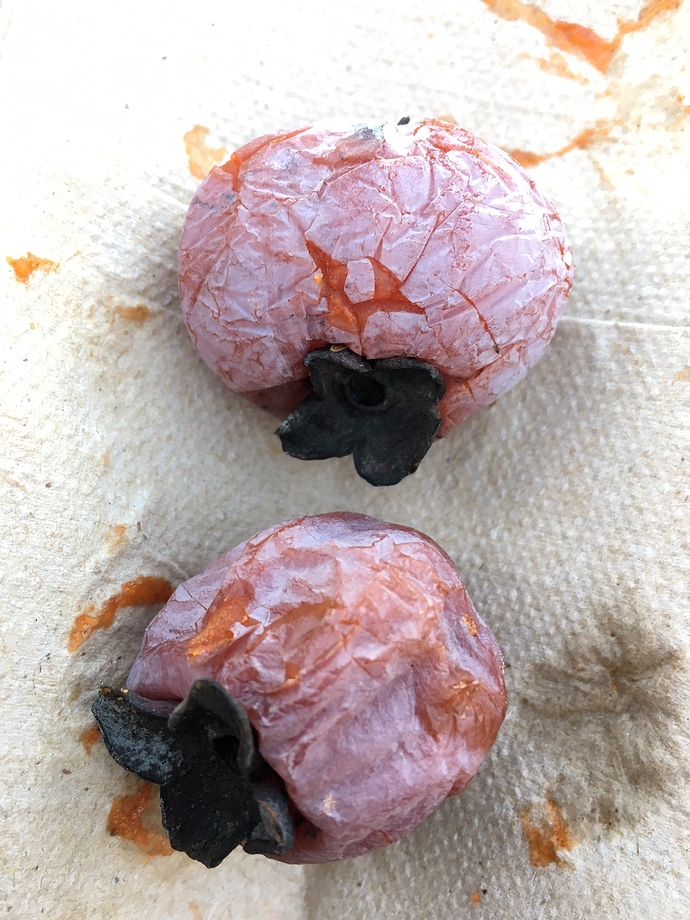 You may want to Harvest those scions and graft them to your trees.

I just ate my last Garretson 2 days ago.
John S
PDX OR

I ate my last fresh American persimmon so long ago I can’t hardly remember, maybe 1-2 months ago. Late August-September is peak persimmon season here. Most trees are barren well before first frost, especially in years like this.