Bad experience with my dripping pear honey order from Gurneys

The flavor of Drippin’ Honey Asian Pear was good last year but this year is incredible. It’s hard to believe the fruit could be as good as these are! Highly recommend them because of the size , flavor , and they are moderately easy to grow. [image] [image]

I decided to order one through Gurneys. It arrived yesterday with very few roots and the roots it did have were dry to the touch.

I soaked the roots in water and mycorrhizae for a few hours before planting and hope it survives. Anyone else had an experience like this with Gurneys? What are my chances of the tree pulling through? Suffice to say I won’t be ordering from Gurney’s again.

I haven’t ordered from Gurneys, no, but I’ve had a similar tree come from another supplier (not sure who so I won’t guess) and it did fine- ultimately suffered winterkill but when I removed it it had an amazing root system. I’d let them know of my concerns and put them on notice that you might be wanting a replacement next year, but I think you’ve got a good chance that it’ll be fine. Good luck!

Against my better judgment, I too ordered two Drippin’ Honey trees from Gurneys. I can’t comment on the quality of stock as of yet, but I am not expecting them to be all that exceptional.

They shipped them the first time during first week of February (I usually don’t plant trees till the first week of April here). They were shipped using FedEx Smartpost, which uses the USPS for the final delivery. Now I can’t get US mail at my residence and use a PO box, I explained this when ordering. That package was returned to sender.

After calling and explaining what happened, they sent two new trees. This time they shipped them standard FedEx to my PO box. FedEx ground can’t deliver to a post office so these went back to sender as well.

Called yesterday and two more trees will be shipped. They couldn’t tell me how they were shipping them, but assured me they would make it. If they don’t I’m cancelling the order.

Buying trees should not be this frustrating!

For what it’s worth, I received a Balaton cherry from Starks two years ago with hardly any roots. It started off slowly, but ended up growing just fine.

Were the roots wrapped up in moisture holding material? I’ve never ordered from Gurney’s myself, so I’m unsure as to how they normally package their trees. I bought my Drippin’ Honey directly from the grower (Gurney’s doesn’t grow their trees), but this is unfortunately not an option for most folks.

There was a clump of shredded newspaper in the plastic bag but I don’t think that helped much. I guess I’ll cross my fingers and hope it buds out in a month or two.

You must have missed my post Mickster, I had a similar experience

This is my 1st fruit tree purchase from Gurney’s and thought I would pass along a picture of the trees to help others know what to expect from Gurney’s. Bought the new varieties Baker’s Delight and Crunch-A-Bunch on semi dwarf rootstock which I am a pretty sure is M-111. Roots look pretty nice, better than expected. The DrippenHoney pear (tree on the right in the picture) is on semi dwarf rootstock which the website says is OHFX 513. Root system size is disappointing but I but hopefully wi…

Eh, my Bay Laurel trees came with horribly chopped roots. They’re starting to bud out and look fine this far. There’s a decent chance yours will be ok.

I’ve ordered a fair bit from Gurney’s in the past. Bare-root stuff isn’t amazingly developed, but it’s been shipped with some shredded newspaper to prevent the roots from drying out. Raintree it isn’t but it’s also cheaper and closer.

Sounds like we had similar experiences and I wish I would have read a bit more before placing my order. Guess we can compare notes on our purchases next year. Thanks for being such a great fruit neighbor! Definitely appreciate your super awesome comments!

I don’t know how sensitive pears are but I got a peach tree from Stark Bros last spring whose roots looked dry when it arrived. I don’t remember how extensive the root system was but I don’t think it looked great. It survived and looks fine now. Hopefully your tree will make it ok!

Thanks for the feedback. Based on the feedback here I’m hopeful that my tree pulls through. I’m still planning to call them to let them know what happened and would gladly accept a replacement if they can ship it correctly.

I got my Drippin’ Honey trees from Gurneys today, Not real impressed, about 1/2" caliper about 30" or so tall. Not many roots, few of what was there were broken. I think they will make it though. Looking forward to tasting these pears in a few years.

Didn’t get a picture before planting, here is one of them in the ground. Hope they don’t mind the snow tomorrow… 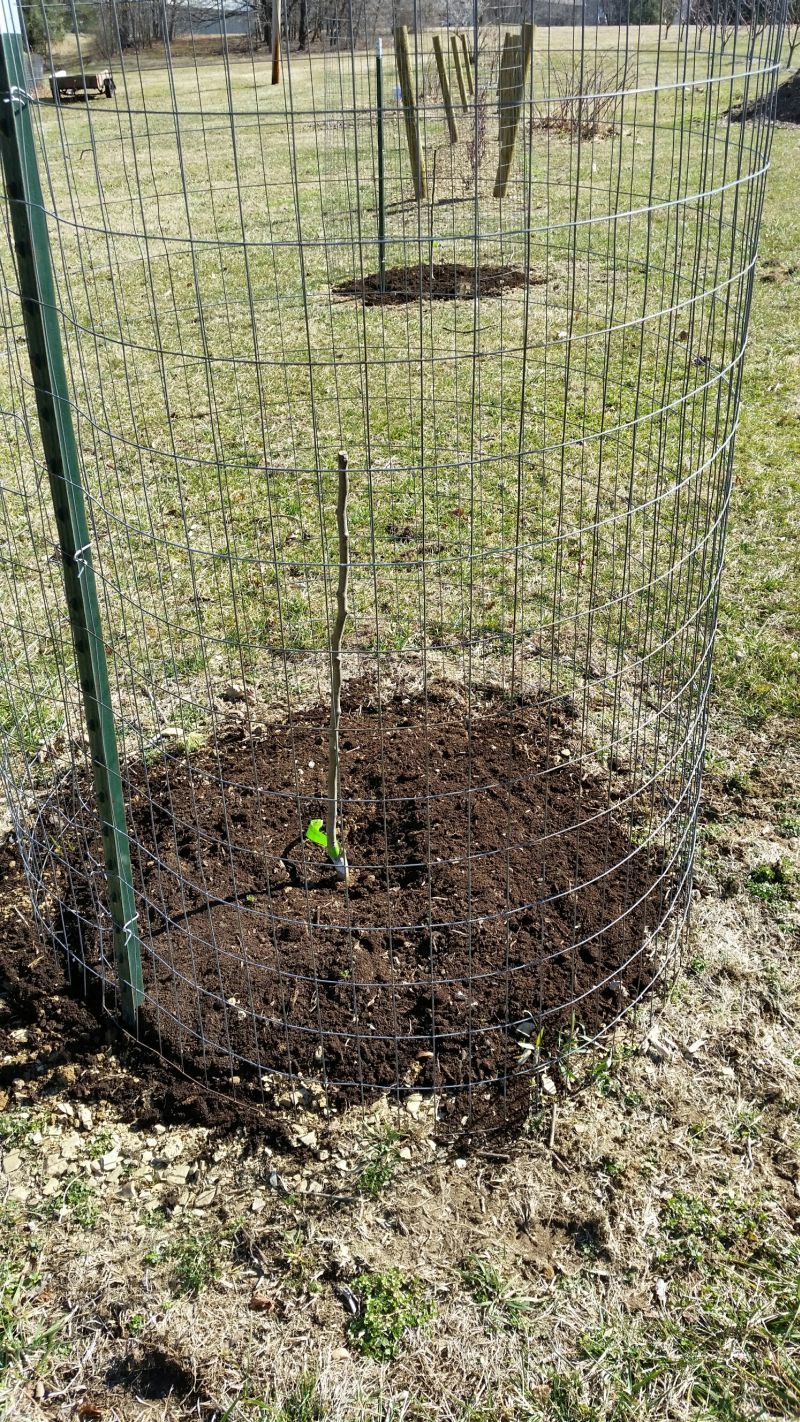 Drippin’ Honey are a good pear. We just ate the last wrinkled pear the first part of March. I have a couple of other types of Asian pears that are blooming this year and I will compare those probably next year. This year does not look good on the weather.

Mickster,
Pears are all somewhat slow growing but drippin’ honey is Asian so it’s faster than most to produce pears . I would say it’s all depending on a few factors which are the location, How much Sun is there in that spot because it loves full sun, How much you water and soil nutrients it gets. The tree has good genetics and that’s what it’s all about sometimes. A friend of mine @39thparallel grows rootstock whips of apples and pears at his orchard and grafts them himself. He has near perfect soil and water’s frequently. I have hosui and Korean Giant Asian pears I got from him that flowered when they were 3 years old and 5 feet tall. I planted them when they were 2 years old. So I mean he benchgrafted them the first year and grew them the first and second year prior to me buying them and growing them The third year. The secret in my location to growing drippin’ honey or any Asian pear (not european) is give it plenty of cow manure or fertilizer, wood chips and water. Many say we are not supposed to fertilize fruit trees but with Asian pears I disagree because if you don’t they can be slow growing. Asian pears are not as vigorous as some European pears so a 1 year old tree is 2-3’ tall , a 2 year old is 3-4’ and a 3 year old is 5-6’ tall but produces fruit. European pears can get 10’ in the same time but take many times 5-7 years to produce fruit. Douglas and Duchess are exceptions because they are fast growing and early producing European pears. Drippin’ honey is not a slow growing Asian pear it’s faster than most but baby it more than most trees like all Asian pears need.

Will do. Thanks for the awesome advice!

One thing I did not mention but will now which is remember what the old timers taught me about growing any fruit tree which is the first year they sleep, second year they creep, 3rd year they leep! After the 3rd year look out because your tree will frequently double it’s size because it’s over transplant shock and it’s found it’s soil nutrients and water sources. Many growers pinch blooms off in that year on Asian pears but you might leave a couple for a taste of your hard work! Fruit runts a tree out because they put their energy in fruit instead of growth.

I’ve heard that and I’ve been pulling fruit from all my trees that are less than 3-years old. This is the 3rd year for my Fuyu persimmons. Hoping they leap this year!

Persimmons are reaaaaaallly slow growing in my experience. Mine have not done a bunch of leaping they are stuck in the creeping cycle.

That’s what I keep reading. Persimmons are one of my favorite fruits so its hard to see it growing so slow. Patience is a virtue I guess.