Bending branches down promotes fruiting, but why?

Early on when I was trying to understand pruning and training trees I got the idea that branches should angle up from the trunk, never to point down. But now I understand that as you train them to an angle lower than horizontal they come into bearing sooner.

But why? That is, what is the mechanism? I assume that it has something to do with hormone flow and nutrient supply, but just what is going on?

I don’t know the answer but could it be added stress telling the tree it is being attacked sending an signal to reproduce to save its species? Or maybe it just increases the flow of hormones?

Gee, how about a tough question once, I’m tired of this amateur stuff, obviously kidding!!

It’s about the hormones. And my understanding is that it doesn’t have to be below horizontal, just some angle from vertical. The more angle the more effect. I go to 30-45 above horizontal because at horizontal there will be strong water sprouts from the high point.

If shoot is straight vertical the hormones are programed to promote rapid growth trying to get above surrounding vegetation. When more horizontal it’s a signal that fruiting is now a better survival strategy than competing for light.

Thanks Fruitnut, and thanks too to mtux96 for your thoughts (which were a lot the way I was guessing.)

So what I am doing is about right, but I might refine it some with the added awareness.

I’m intrigued by the things I’ve learned by seeing a tall spindle set up (that’s the Billingsley Cider Orchard I talked about on the other board), together with videos showing up today on the Houzz board, plus everything Alan has explained about the need to remove side branches when they reach a certain size relative to their parent branch, and so on.

It slowly starts to come together! (But understanding is one thing and application another, ay?)

But now the question arises, why do tall spindles produce so much fruit on the vertical? (I know, I know, it’s hormones again, right?)

The trunk is vertical but the fruiting spurs aren’t, right? And those systems are on precocious rootstocks.

Well, sure. That makes sense. Makes me want to get a few of those going, but I don’t have the room (or the permission from herself).

Pruning is such a complicated business. When it’s snowing or other winter problems keep me indoors I do a lots of review and some new reading about pruning. The best part is how pruning experts are constantly in conflict about very fundamental issues.

Bas Van den Ende is my favorite pruning guru and he suggests that you should never let a branch bend all the way to horizontal or below for the reason FN mentions. However, the solaxe training method is all about tying branches to below horizontal and orchards that use the method have low pruning expenses because of the reduced vigor of the trees.

When I train an apple tree to open center I usually train upper tiers to below horizontal with all vigorous apple varieties. It is the best way for me to keep the upper tiers productive without shading the lower branches. I also train huge old apple trees to a weep as a general rule. In both cases my results are very good.

And yet, Bas Van den Ende knows as much about managing apples and pear trees as anyone on the planet.

For people who like clear, written in stone guidelines I recommend car repair.

Alan. Thanks for the tree bending guidance on the houzz site. It took me a little trial and error to get the hinged cuts right but once I did the limbs pulled down like they should. I have a smaller pear tree that I started lowering the limbs 2 years ago and they are already loaded with fruit buds. Bill

I hesitate to answer pruning questions because you have such extensive experience. When I do I’m proud if I don’t get it too wrong. It really seems that in my environment I hardly prune and still the trees stay small and overset like mad. I’ve read a bit of Bas Von’s writings as he’s featured often in GFG.

I think it’s a lot easier here, dry and sunny, and would claim that my stress on holding down vigor makes pruning much easier. It’s those overly vigorous trees that test ones pruning skills. I wonder if growers like MrsG aren’t largely fighting excess vigor. She seems to have big trees void of fruit.

Fruitnut, please never hesitate to answer any questions on growing fruit trees, your experience on pruning is certainly different than mine and that just makes your contribution more important to me and, I’m sure, helpful to others. I know your deductions will always be sound and your contributions interesting.

I may contradict your conclusions, but as you say, the conditions I draw my conclusions from are much different than yours.

I too think I’m going to have a vigor problems when one tree can grow 7 feet in a year. Luckily it was only one tree. Fruit buds though seem to be plentiful if mother nature will ever let them survive. This too has an influence. I best thin hard if/when they ever fruit.

Pruning is more of an art than a science which is why it is so confusing. Just about any expert pruner would prune differently, especially on a central leader tree. Tall Spindle (TS) Apples are deigned so that the pruning process is mechanical based on certain rules of thumb that are easily followed. No art in pruning Tall Spindle, just follow a few rules! Below is a link to a pruning demo for Tall Spindle apples. I believe there are about 5 or 6 video in this series that explain the advantage of TS and the proper way to implement it. This is the best information on Apple production I have ever seen. Dr Robinson from Cornell discusses the TS method in these video that were recorded in 2013 during an Apple growing school held in NC

this related to my other question, when a flower buds was formed? are the buds born as boy or girl, leave or flower? or it was born in “unisex” and influenced into boy and girl late in the season?

In the Tall Spindle system branches are tied down in the spring to promote fruit production next year, promote leader growth and to keep the diameter of the laterals small. This may not be what you want with cultural practices other than TS. The fruit buds develop in the fall. In most cases the laterals are only tied the first year and I have found that concrete weights attached with a clothes pin works better than actually tying the branch. Here is an excellent video of the entire process at a large commercial orchard, which should also work in the backyard;
https://www.youtube.com/watch?v=rl1-9AIA1g8

We bent cherry branches down in the 1990’s in Australia.
The idea has been around a long time.
Australia has the most wonderful parrots in the world, unless you grow fruit.
So acres of orchards were netted. You can see the net wire in the skyline. 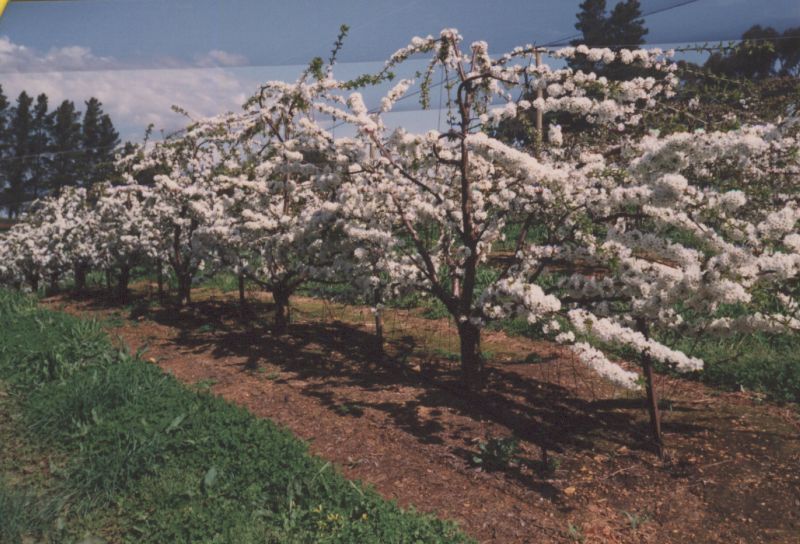 The other benefit was that you could pick the fruit from the ground no ladders. 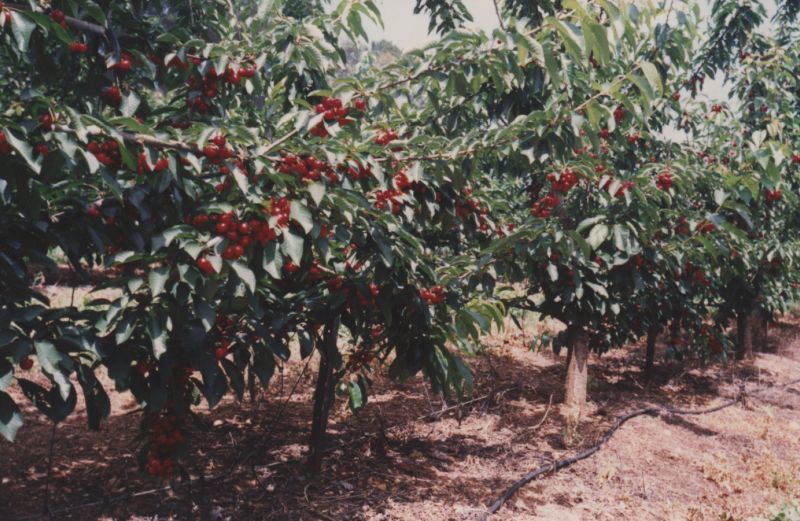 David, beautiful trees/blossom, and fruits. Are these sweet cheery trees? How tall are they? I assume the tree would want to grow upwards, do you just prune the branches off to make it stay bent like this?

Blueberrythrill, It makes a lot more sense that the flower buds developed in the fall so that the next year flower Qty directly ties to current year growth condition. However, if this is entirely true, when we do later summer early fall budding, we really can’t tell that we are budding a flower bud or leaf bud. Is it possible we bud both flower buds and leaf buds in the fall , somehow the flower bud turned into leaf bud in the spring and grow a leaf? Because I have never seen a newly budded graft blooms in the spring?

Looks like high density tree fruit production in the US is just starting to catch up with rest of the world.

The Cherry tree are really close together. Do you recall the spacing? I see what looks like posts between the trees. Are the post to help support the Cherry tree or hold up the net?

@blueberrythrill they were 16x9 spacing, that was because of the big tractor sprayers used back then. I think you could do it all with atvs nowadays. 12ft rows like Dr Robinson says are the new standard. The posts are to hold the single stand fence wire. You tie the limbs to the top of the post or the wire… You can see the strings top photo. We used string through old irrigation tube so the string did not damage the limbs.

@IL847 yes sweet cherries. The trees were about 7ft high with 5ft growth each year, this was tied down the next year.
The bird net was 14ft high. You don’t want trees growing through or touching the net.

I should not have pulled these photos,now i am so hungry for some fresh fruit. 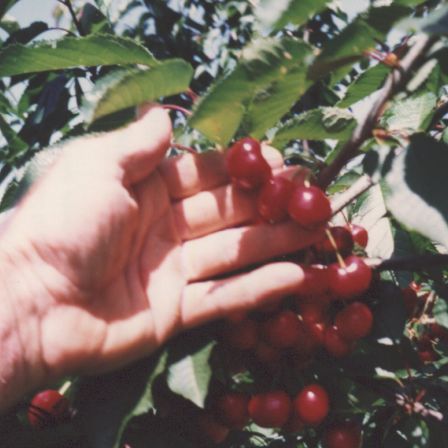 Growing fruit on weeping branches is as old as growing fruit and many apple orchards on seedling rootstocks were managed that way a century ago and more. What is new is using the technique in extremely tight spacing- with apples on dwarfing rootstocks.

In the book Ecological Fruit Production in the North, published in 1983 the author describes a method of renovating big old apple trees using a technique he calls the “Swiss Training Method” which he learned in Switzerland as a boy- probably in the 1940’s. The main idea behind it is to remove all upward growth and leave only hanging wood- essentially training the trees to a weep.

When I got this book I’d already seen commercial orchards where the upper tiers of central leader trees on semi-dwarf rootstocks were trained to a weep. The crop would pull the branches down and the pruner would eliminate all the vigorous upper growth so the upper tiers wouldn’t block light from lower scaffolds. Since then I’ve seen very old pictures of orchards with huge apple trees on seedling rootstocks completely trained to what they call an umbrella. I’ve also trained hundreds of such trees this way on sites I’m hired.

I’ve never seen cherries trained this way before seeing these photos though. I have read about the Japanese staking branches of cherry trees to horizontal to maintain a very low growing tree as something they’ve done for a very long time.