Chopping back the top of a peach tree

I have a 20+ year old peach tree that’s been ignored for years due to (my) health issues. I didn’t prune or thin when needed and branches have broken and then weaker branches regrown. The canopy also starts high, like about 5 feet. I’d rather not remove it and am wondering if I could cut it down lower and expect regrowth (which I’m assuming would initially be thin limbs that would need much attention).

Is this feasible and if so, when would be the best time to do it?

Yes. I’d wait until after dormancy, either at bud break or just for the beauty of it - after blossom fall.

Should I cut it square or at an angle? Should I treat the cut with something?

I would cut it horizontal, between 32 and 42 inches above soil level, then paint the wound with Morrison’s Tree Seal. Wait one year before determining which emerging branches to keep – although if any emerge below the rootstock graft remove them immediately. As for which branches to keep - get a copy of “How to Prune Fruit Trees” by R. Sanford Martin. Pretend your tree is new and read the section on “Training of young trees”, and in the following years use the section titled “Peach”.

Thank you very much, Richard. I will order a copy of that book.
Regards,
gary

Sounds like a good book to have in the library. TY for suggesting it.

If you have the room, just plant a new tree. They grow so fast, you would likely get fruit the following year. I actually got fruit the first year and it was just 1/2 inch in diameter when planted.

Richard asked your location so maybe he knows something I don’t know about dedifferentiation of peach bark cells in warmer climates, but old peaches rarely sprout new wood from old bark in my neck of the woods in the northeast. Even young trees usually die if you cut them below existing sprouts.

But you did mention leaving some very weak branches that exist lower in the tree, which might take over for you and save the trunk and root system below, but if I was reluctant to take big risk of killing the tree I’d at least leave a single branch that had vigorous new wood on it.

That said, in your climate it only takes a whip about 2 years to start bearing fruit and 3 years to make a pretty big tree with ample irrigation and in good soil. Are you sure it is worth it to try to bring back such an old peach tree? They are among the shortest lived as productive fruit trees, although individual trees often defy that tendency. Varieties more prone to generating new shoots from old wood tend to be the longest living, productive trees.

The only reason I know that it is suggested to make cuts of trunks at an angle sloping away from the nearest existing branch is to reduce the presence of water on the wood by allowing it to drain off more easily. Sometimes it also looks better.

Is this feasible and if so, when would be the best time to do it?

In my climate, it’s normally best to prune peaches during the growing season to avoid issues with winter hardiness. But in San Joaquin Valley I can’t imagine you’d have any winter kill issues. So you could probably prune anytime you wanted.

I agree with the idea of planting a new peach tree. A 20 year old peach tree is probably near it’s life’s end anyway.

If you do prune it, I’d leave a nurse branch, as mentioned.

Here are the best three videos on the internet on peach pruning, that I’ve seen. The only thing which isn’t discussed is vertical spacing of the scaffolds and the importance of choosing scaffolds which form strong collars. Branches which form strong collars can usually be identified very early. Most of the time smaller branches (relative to the size of the trunk) help with good collar formation, but not always. 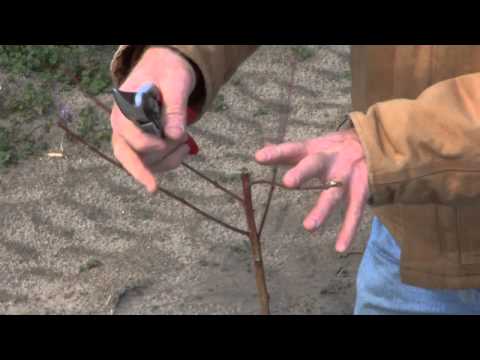 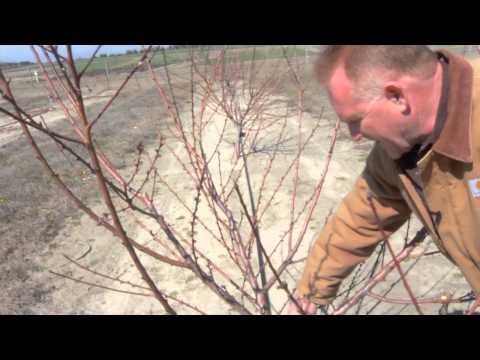 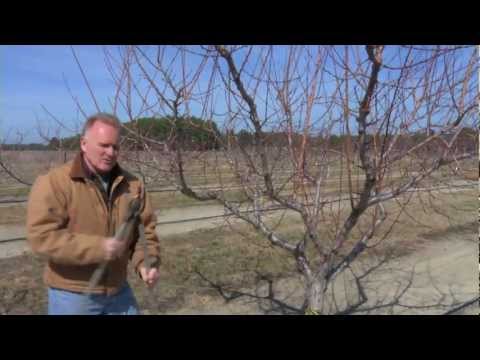 But in San Joaquin Valley I can’t imagine you’d have any winter kill issues.

The issue is with decapitating the trunk to generate new, lower scaffolding. This is best performed after bud break. All other pruning is then performed during dormancy as described in Martin’s book - whose illustrations and concise discussion exceed any pruning video.

The issue is with decapitating the trunk to generate new, lower scaffolding.

All other pruning is then performed during dormancy as described in Martin’s book - whose illustrations and concise discussion exceed any pruning video.

Is there anything specific in the videos that was left out, that Martin’s book covered? Other than things I mentioned about collars and vertical spacing, the only other thing off the top of my head is that the videos don’'t go into a lot of detail about why to prune the ends of the shoots. Dr. Parker does mention to prune the ends of the shoots in the videos, but not all the reasons why. Other than that, I can’t think of anything else he left out.

May I ask what were Martin’s credentials? Do you know if he ever worked in a commercial peach orchard, or ran an experimental peach research station? I ask this because no commercial peach grower I know of, or any peach specialists, recommending the use of asphalt sealant for pruning wounds on peach trees (other than for grafting, and even then asphalt based sealers are not recommended.) I assume from your earlier comment, Martin recommended this?

Is there anything specific in the videos that was left out, that Martin’s book covered?

Martin’s book is in the public domain. PDFs of individual sections and the entire publication are available online.

May I ask what were Martin’s credentials?

Martin was a Landscaper, Landscape Architect, and owner of “Organic Soil Condition”, born 1900, passed in 1981.

Thanks for all of the replies. I’m especially partial to this particular tree. It’s the first fruit tree I ever planted, so I’d like to try to keep it. This year it actually put up a new shoot where an old one had been pruned off many years ago.

I’d gone to the nursery late in the season, wanting to buy a peach tree. This was the only one left, it was ugly and unloved but I brought it home anyway. It’s given me many years of outstanding fruit.

I suppose I could get a taller ladder and work with it the way it is, making some judicious cuts to train it in the right direction. I’ll have to see how it looks after all of the leaves are off.

I’d suggest that you start a new tree and then take a bud from the old tree and chip it into the new one in two or three places. Chipping is not at all hard to do and there’s lots of people here who will be happy to talk you through it. Heck, we must have members in your area who would come and do it for you!

Where is that dern map, anyhow? Here it is: General Location Map of growingfruit.org members

Thanks for the idea, Mark. I have three other peach trees so if this one goes away I think I’ll just leave the area barren. I’ve managed to do damage to myself and it’s getting harder to keep up with things.

I agree with Mark and those who think a new tree grafted with your tree bud wood would be a more successful venture. I have tried to graft new wood onto my neighbors 25 year old Frost tree for several years to attempt to regain new top limbs. Only about 1 out of 5 grafts took! Older peach wood is very difficult to graft.
Dennis
Kent, wa