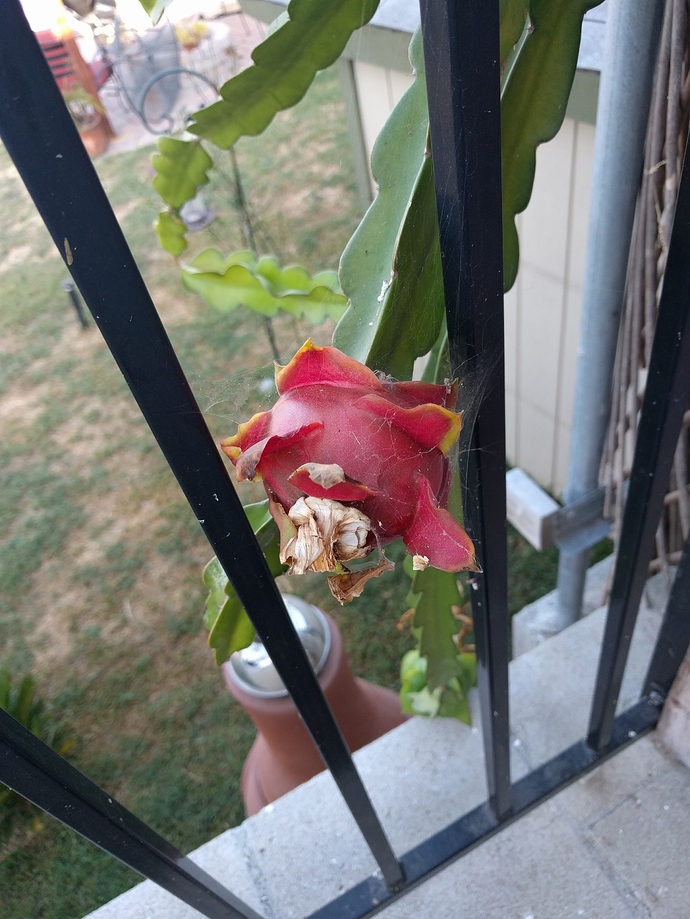 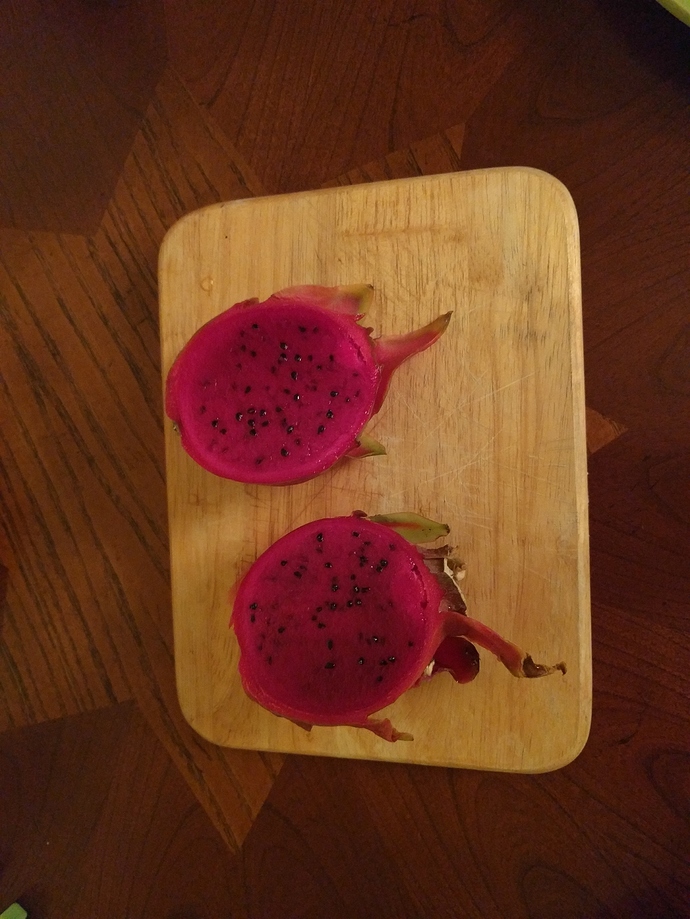 Interesting looking fruit Richard. What does it taste like?

Dragon fruit is awesome, always pick up a few when I see em at the vendors, prefer red to yellow and white.

I’ve only had the dried ones that Trader Joe’s carries and are candied.Do they have much sweetness naturally? Brady

yes sweet but not overly coying, texture almost pear like, the seeds have a slight crunch like kiwi

Many people eat it with a spoon like you would a melon. It is a bit like eating watermelon. The pulp is juicy, less coarse than watermelon, and the flavor of this species is “light berry”.

It may be my imagination but I think the flavor of American Beauty (which is the only one I grow and, BTW, the color in the photograph does not do it justice–no offense–it looks positively toxic in person!) improves on cutting and refrigerating. Perhaps there is an oxidation reaction that works to intensify the taste. But they always seem to taste better on the second day (yeah, they can be kinda large and we generally eat a mixed fruit plate at the end of lunch).

I’ve had a few dragonfruit plants over the past decade. Super easy to propagate, just stick approx 1" cuttings into good soil.

My biggest was almost 4 feet tall and the thickest stem had a diameter of almost 2 inches. I was sad when I lost that one, but I was able to save a few cuttings of it.

Good plant to move in and out as the seasons change, but it does have very small thorns so I try to be very careful when moving it.

it does have very small thorns

Well, some selections have small thorns.

The best tasting I’ve grown is H. ocamponis, although in my experience it is a shy bearer. It’s thorns are 1/2" and robust.

Dragonfruit on its way! 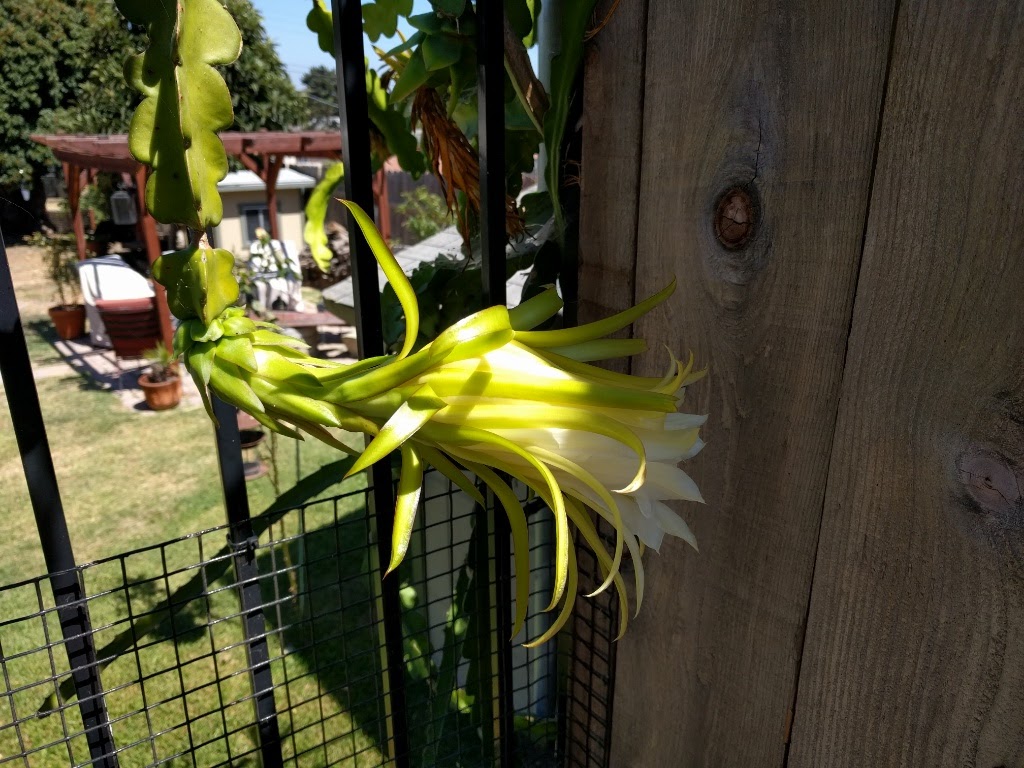 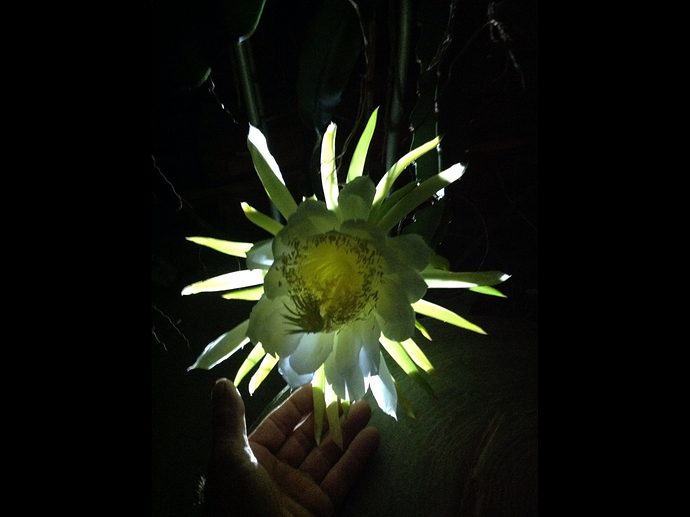 Do some cultivars have a lot more flavor than others? I’ve tried dragonfruit a number of times in Singapore and Thailand. They’ve been white fleshed and taste and texture of very bland kiwi.

There are several species and hybrids. I prefer the red-fleshed H. guatemalensis and H. ocamponis, although the latter has serious spines and tends to be a shy bearer.

I’ve had one white fleshed variety and would describe it as “mildly unpleasant”. Perhaps it was not properly ripened.

I have been growing American Beauty for a number of years and like it, as has everyone I’ve shared some with. The color is a truly shocking magenta/purple. I believe it tastes better chilled and even better if cut and stored in the refrigerator. Maybe there is an improving oxidation reaction going on, but they always seem to get better after being cut open for a day or two.

I’ve had one white fleshed variety

At my previous home I grew a half dozen dragonfruit varieties. One of them was Paul Thomson’s H. undatus selection. For the whites it is very good – not too sweet and perhaps a bit more “fruit” taste than other H. undatus. But in comparison to the red species I believe it lags behind in flavor.

White fleshed red skinned dragon fruit I describe as having so little flavor they make me angry that there is not even a bad flavor because that would at least be something. Last year maybe two years ago I tasted my first Red skinned red fleshed Dragon fruit and it was mind blowing tasty. I have always read yellow skin red fleshed taste even better. Unfortunately I have not had a Red skinned red fleshed that tasted that good since. I can describe the flavor of the Good red/red as the same flavor as a very good Red Prickly Pear, Also a cactus, only 10 times stronger.

I’ve had dragonfruit plants potted for a number of years. My largest reached 3 feet tall (they are kind of a vining cactus) and was a huge pain to move each year (here in Mi it gets cold enough to kill these by mid-october). It was a pain to move because of its growing structure and because it leaves behind almost invisible tiny needles if one isn’t careful (and given it is a vining type plant I always got myself each time I moved it)

I had 3 of them for 4+ years. This year I lost 2 of them because with my recent rotator cuff injuries; I needed help with them and the temperature dropped a few nights more quickly than I had thought it would (mid-October). My youngest did help me move the smallest (2-gal) and I think it will recover…

I never got these to bloom (though I did get buds a couple times), nevermind fruit. They tended to be lanky unwieldy plants which have no problem putting out awkwardly larger growth on spindly thinner stems. The effect being that the plant needs to be constantly supported, at least when growing in my climate.

Scott (who really has a zone denial problem)

Scott, yes they can be a pain to move and will do better on a permanent structure - which is impractical in your zone. They do need a certain amount of bio-mass before they will bloom and fruit. I believe conventional wisdom has it at around 20 pounds, but I have a smaller one put out a couple of blooms that did bear fruit. It was a single stem that got to about 5 feet in height, but it’s on a permanent trellis. Prior to setting this up, I had it in a pot and it got up to about 4 feet in height. But I accidentally snapped it in half trying to move it. So now I have the one on the trellis and two smaller ones in pots which I will most likely give away to a neighbor.
Best of luck with your dragonfruit!

First fruit bud of the year 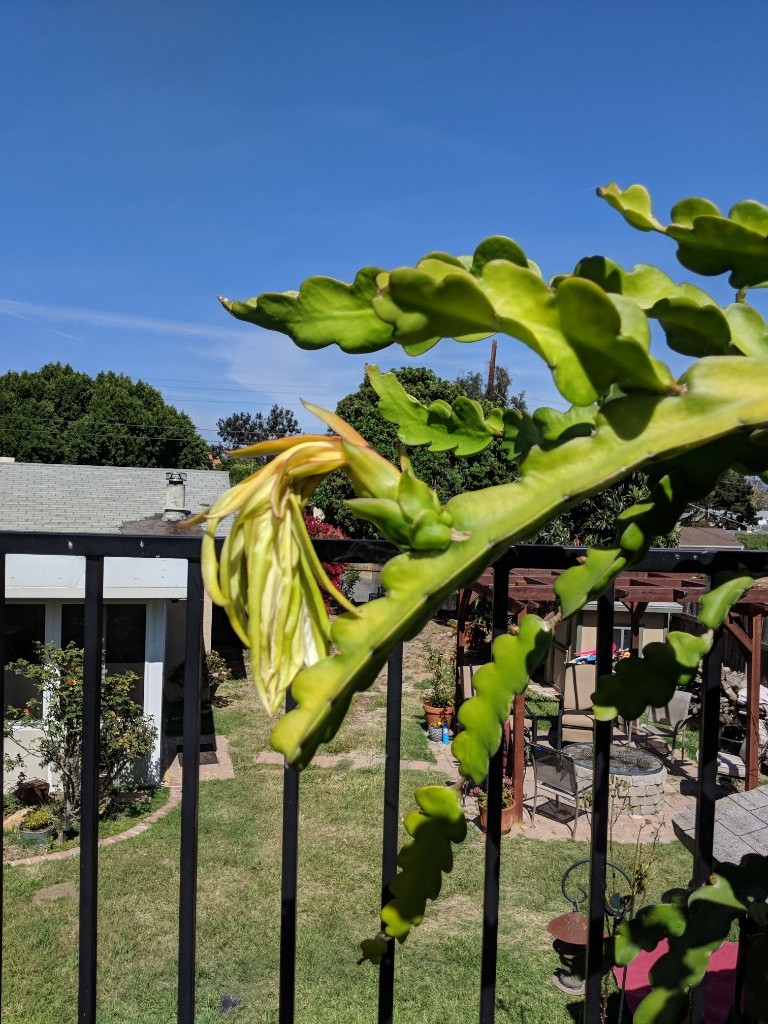