For the second year in a row, my FQ has been a very
shy bloomer, with about 1/5 of the blooms I get from my
other pluots. Is this normal for FQ, or do I have a dud tree?

Ray I tried that one in Austin several years ago and had the same results. It would bloom but barley and would limp out of dormancy. Don’t know anything that causes that but lack of chill. In the few years I had it, it never produced. I have heard Fruitnut and others say it ain’t that great anyway but I can’t lie the descpription of a fruit that is so sweet you cant stand it made me very curious!

I don’t think it’s lack of chill hours, because I have peaches that
require 750 chill hours that are in full bloom. I think it must just may
be a dud variety that DWN has charmed the public into buying. I think
I may graft onto mine.

Had mine for 5 years, bloomed ok not great but rarely set fruit so I cut it down last year.

Mine in greenhouse bloomed profusely and set mega fruit load. It was always one of the first to bloom. I really doubt it’s high chill. DWN est of 300-400 hrs sounds about right.

Quality was very sweet but lacking in flavor for my taste.

My question is are there lots of flower buds that set last yr but failed to open?

Ray, the branch on my 2nd year 4’n’1 bloomed well, but was also the first. The blossoms were aging by the time the others started.

My Flavor Queen is very lively on my 4-n-1.(FS, DD & FK) I had attempted to cut the limb off back in September. I left about 1 quarter on and the graft grew back quickly and seems to be more productive than before. I plan on getting rid of it entirely in the hopes that the FK and the FS will regain their vigor and energy. The FQ has about 3 new limbs and 3 buds that are beginning to open. I have had this tree for 4 years now, and I have never gotten any fruit from it. However, the Dapple Dandy has had the most blooms this year and the fruit is outstanding.

Meant to say that I have never gotten any fruit from the FQ graft that is…Right now, FK is in bloom, it has 5 blooms. Dapple Dandy has about 40 blooms and FQ has 3. FS has none. She just has leaves. I will post a picture later. I am at work now…

Flavor Queen does great here. I always get tons of blossoms and plenty of fruit. I love the pure sweetness of FQ, It’s one of my favorites, I would never consider getting rid of it. 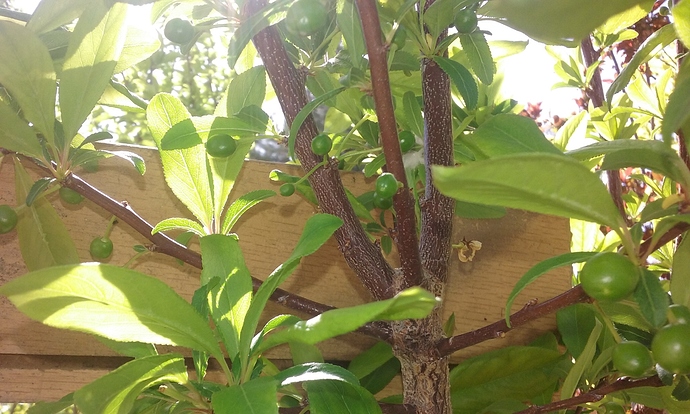 All of my pluots bloomed and set fruit last year, but they were lost
due to a late freeze. FQ is the only pluot that is shy in blooming and
did so last year too. I’ve got lots of bees and I’m going to get a great
stone fruit set, so I’m anxious to see what kind of set I get with FQ.
Next year, I’m going to give it a dose triple super phosphate, and if
that doesn’t do the trick, then I’m giving up on it. I’m still going to
graft onto this tree.
From all of the responses, it seems that I’m not the only one that’s
having this experience with FQ.

I never did figure out why mine didn’t do any better. My tree had plenty of fruiting buds but as I remember they opened one or two at a time over a long period and some of them were misshapen. It even took it’s own time leafing out but eventually did. Perhaps it had a virus? Judging by others reports I wonder if it doesn’t set well in humidity. Maybe its best as a west coast (or greenhouse) variety. I’m telling ya super super sweet is very tempting!

I think I’ve lost my title of chief brix junkie.

I have the same tree and FQ is my worst performer in on it too. Looking at it now I want to kick my own ass for screwing up and setting the tree back another year. I should have pruned each variety back to outward facing buds to develop the tree shape but instead I let it grow. Now flavor King and dapple dandy are thick and upright and loaded with fruit buds that are about to pop. I would certainly have a decent little crop this year but I feel like I need to cut them back now and start over. I really want to taste fresh pluots this year but it probably won’t happen.

I thought about letting it fruit and make the pruning cuts after harvest. But I don’t think it will spur the same kind of growth that it would this time of year.

God I could kick myself. Did the same thing with a Combo cherry. One thing for sure is that my new trees arriving shortly will not have the same issue. They’ll be going under the knife from the get-go.

Hi Speedster1,
Hopefully, if all goes well with pruning (on both our parts this year), we will end up with just what we want: some good growth, and some great fruit production! I may just do the same thing with all the grafts on my tree as well. Dapple Dandy is so prolific on my tree. I have pruned that graft more than all the others and it just outgrows all the other grafts, no matter what. The first year that I had the tree, (2012) FQ had a lot of blooms, but then she could not hold anything. They shriveled up and died. Throughout the four years that I have had this tree, I did get a few Dapple Dandy and FS, but now, this year, the FS is only blooming leaves. What the Heck! So Speedster, I could kick myself too, but I’m hurting enough over my sweet baby 4n1 pluot tree!

I am gonna prune this year for sure, but hopefully not too much. Good going with yours as well.

Also, when I get some good growth on the FS and FK, I will definitely be grafting these scions onto other less desirable plum trees! I am gonna do summer T-budding and spring grafting. Yep, I am going to do everything I can to keep FK alive somewhere in my garden!!!

I may end up with that 4n1 just being a Dapple Dandy. I love that particular fruit too. So, it may not be too bad after all.

Yeah with temps predicted in the 20’s this weekend I might not have to worry to much about getting fruit anyway. Haha. For what it’s worth I’ve read that the dapple dandy outgrows everything else on these trees by a mile. Although on my tree Flavor King is also pretty robust. Just not as much branching at this point. I’ve got quite a bit of pluot scion wood. When I cut the scaffolds back I am going to dormant chip bud Flavor Grenade in an orientation that I’m missing a scaffold to try to see if I can get it to grow out. If that doesn’t work I’ll try notching above a bud on the trunk to try to spur new growth. I imagine cutting back the scaffold should also create a flush of growth on the trunk but if not I’ll try a chip bud this summer. I bought a a cheap well branched potted plum tree that I will graft lots of pluot to in case I need summer bud wood.

I agree with you. My few flowers appear misshapened and don’t last very long. I’ll be surprised, if I get any fruit set at all. The bees don’t even go to the tree, kind of like Flavor Supreme. I’m beginning to believe that this is a west coast tree or one to be grown in a greenhouse. Maybe it is our humidity. It grows fine, but who the heck wants an ornamental pluot.

Hahaha. It’s just the curiosity of it honest!