No. In the case of peaches no. Not as much.

Most genetic dwarfs are still sold on Lovell (standard). We have 6 of them. They exhibit dwarfism as the cultivar is naturally dwarfing (short internodes). Height tops out at around 6 ft ish (give or take a foot). A non-dwarf on a dwarf peach will just exhibit poor vigor as it struggles to attain standard size. As for suckers, peaches in general are difficult to root.

Thanks. The two suckers I took had some small roots on them. If they survive maybe Ill use them for grafting regardless.

Like just peachy said most genetic dwarfs are grafted on Lovell because what I found out when reading was genetic dwarf peaches just grow a few inches a year. If you read my thread and many other thread most people said just prune your peaches anyway and they will stay at the size you want. Ended up just getting some donut peaches in the end.

I just happened upon your response from April '21 and wonder if that PLC regimen is still what you use.

After years of having limited success with a monthly alternations of Kocide and LS, I tried Ziram at green tip (a little late but this is when I got the Ziram) this year and poof!!! - no PLC. Does your recommendation of Kocide + sticker (Dec), LS (Jan) and ziram + sticker (Feb) still hold …or have you switched to solely Ziram in Feb?

yeah I’m not an expert on this, I’m still trying to experiment and do the IPM thing and reduce sprays to only what’s needed. this year I did copper+sticker Feb 1 and then I got really good timing on lime sulfur sometime late February and stopped with that, no ziram, and ended up with maybe 10% curl on the highly susceptible stuff (like spice zee nectarine) and 5% or less on resistant stuff. I think next year I’ll try ziram-only. I suspect that keeping it knocked down year-to-year will make things easier so maybe ziram is only needed every other year? ziram being the big gun that should give you great control one year so you can do less the next year. just a guess

Thanks for reply! Peaches are the only fruit crop that has me stepping over to the dark side (Ziram). I was amazed that after 30 years of unsuccessfully battling PLC with copper and LS, I got none this year with Ziram. But that was following Nov-Jan alternations of copper and LS, so I really don’t know what did what.

Ziram spec sheet states “1 spray after leaf drop and/or prior to bud swell”. I guess I’ll try the “and” this year, the “or” next year, and then maybe skip a year. I’ll share results.

By chance, is anyone here aware of whether the tight internode “dwarf” trait is based on dominant or recessive gene(s?)? If it’s dominant it would be practical to make crosses with leaf curl resistant peaches to get more resistance into the dwarf peach gene pool.

Garden delight nectarine. It took a few years to get good tasting fruit off this tree, but this year these are quite small, but nice. Very freestone which is great. 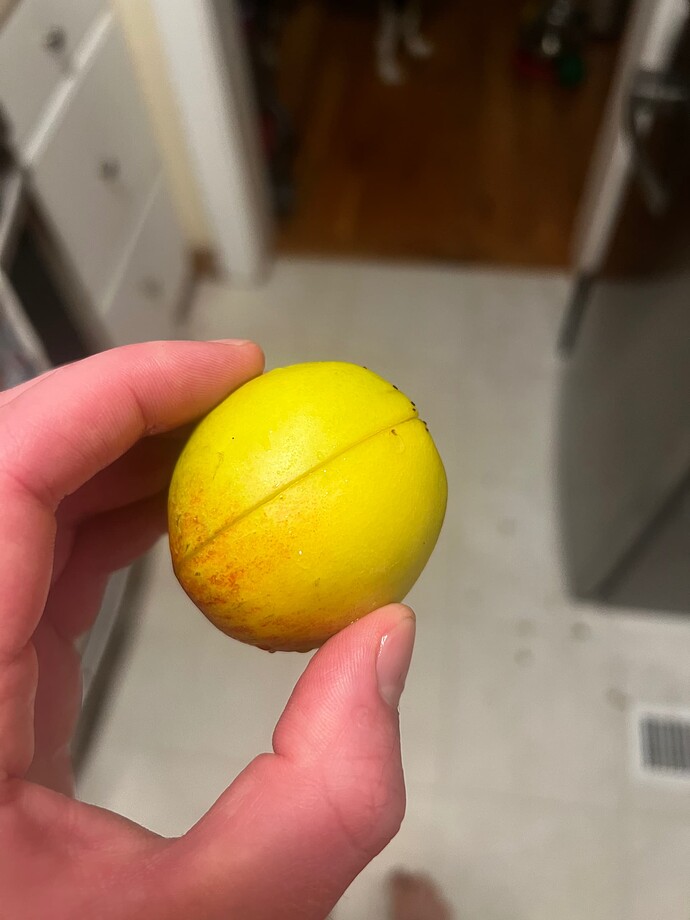 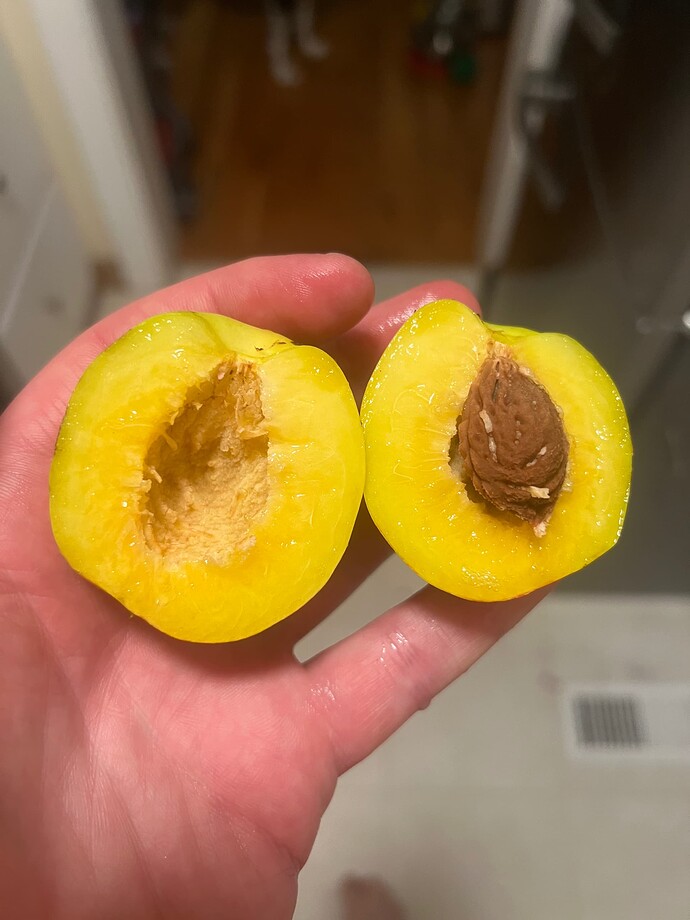 Is the brachytic dwarfism trait what is in use here? I had read that it was considered to be a negative genetic trait in peaches. Apparently there’s another genetic trait referred to as “compact” based on a different genetic mutation than the brachytic dwarfism trait. Do we know which of these two traits is being employed for the commercially available “dwarf” peach trees?

The genotype of the brachytic dwarfism is designated as (dwdw). This description of various peaches lists the dwarf peaches as dwdw, so these do appear to be dwarf due to the recessive brachytic dwarf allele. From what I have read, the compact trees don’t have the really short internodes.
http://www.chathamapples.com/SE/Peaches.html