Get Ready for Cosmic Crisp Apples

Just paid 2.99 for some CC. These are what they are supposed to be. Big, heavy, incredibly Crisp and sweet.

CC has more intense flavor: more sweet and more tangy. And has an equally strong crunchy bite. The very best Honeycrisp may have a slight edge in aroma.

I have had about a dozen or so Cosmic Crisp apple now so far. They are mostly just sweet, juicy, and crunchy to me.

They have been running $2.99/lb here at Hy-Vee (the more upscale Iowa/Midwest grocer). They just showed up at Fareway last week (the more budget chain we frequent). I think they were cheaper, but the quality was lower - slightly smaller size and many with less color. So I think that, as usual, price might be reflecting quality.

I think if the goal for these apples is to replace the dismal Red Delicious, then they have a good chance. However, so far, I have not had a Cosmic Crisp that rivals the best Honeycrisp from the store or local orchards. And really they don’t even match up to the Crimson Crisp that I still have and came out of the PRI scab-resistance program.

I guess I’ll wait until someone offers me Cosmic Crisp for a free taste. I normally skip by the apple section of Wegman’s, our local supermarket, so I haven’t checked to see if they’ve arrived yet.

I still remember my first taste of a Honey Crisp at a friend’s house years ago: odd crunch sensation, but where’s the flavor? — This one won’t catch on.

I bought some smaller CC yesterday, and the skin was much tougher than the others I tried. Almost on par with Red Delicious. The flavor was less than before, and the texture still not as fine as HC. I think like GMO foods, the primary benefit of CC is to the grower/distributor, and not the consumer. I think it is a good alternative to HC for people who like peeled apples or tough skin.

Haven’t seen the Cosmic Crisp at Kroger or Walmart. I did buy a Autumn Glory…just one.
That’s fine, I like it’s parent, Fuji better anyhow.

I’ve only had a few Crimson Crisp, and that was this year. But I think I agree, the best Crimson Crisp I had may have been better that the median Cosmic Crisp of the 10 or so I’ve eaten.

Just got one down here in Chattanooga. Was very tasty sweet crunchy and big. I had to split it for 2 people. I prefer a smaller apple but would eat it again

Finally did obtain a couple Cosmic Crisp at Meijer’s. They were 30 Cents per pound cheaper than Honeycrisp…so I figured time to try them.

My initial conclusion, based on that small sample, was that I would take a good tree-ripened Red Delicious or a quality Fuji over Cosmic Crisp even if the price per pound were the same. (And since Cosmic Crisp is a very heavy/dense apple…if the price were $2 per pound, you’d almost get two red delicious for what one Cosmic Crisp apple would cost…even if the apples were of equal size!!!)

I had my first CC recently and found it to be a very good apple. The brix was 18 which is very good for a large store bought apple. It was better than any HC I’ve eaten.

Based on others opinions CC must vary a lot just like HC. So I think they can all be bad.

I think that the big fat CC that look and feel full and usually priced higher are much better than the rest, especially the ones that are sold prepackaged. That’s what I had noticed.

The BIG ONE was really good from Walmart. 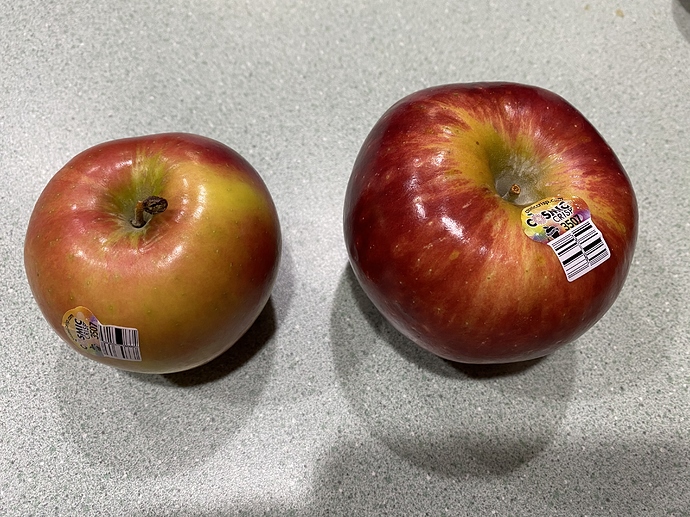 I would recommend picking a CC that looks like that one on the right, as opposed to any other variation. I’m sure it’s worth a try if you were disappointed before.

The one I liked looked like the one on the right. I chose the one with the most dark color. The one on the left looks more like a dud.

Cosmic Crisp is available from retail mail-order nursery Raintree. But they only ship in state.

Same story at Burnt Ridge. They have them, but only to Washington customers.

I bought some Cosmic Crisp apples, and they are good. A nice sweet crunchy apple with some flavor. But Crimson Crisp is much better, imo. I prefer tart apples, and the Crimson crisp is tarter and has a more complex flavor. It’s one of my favorite apples for eating out of hand. It also makes a very nice pie, although it’s not my favorite for pie.

Interesting, Cosmic Crisp seemed to have quite a bit of acid to me last year, although the samples varied a lot too. I’d prefer them more mellow.

I agree that the flavor wasn’t complex.

So what is your favorite pie apple? Just curious.

I have eaten a few Cosmic Crisp and I think they have a nice crisp crunch to them.
I will try to find some Crimson Crisp to try out.