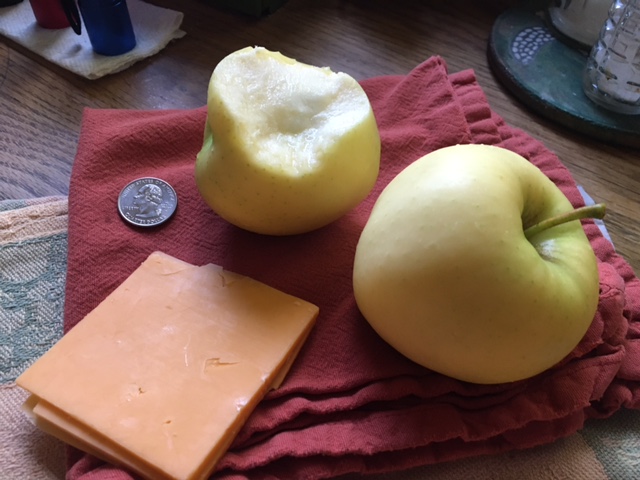 Sure is a pretty apple you got there, though.

No, not that early for you, but only about two weeks behind my State Fair, which is my earliest apple.

True. I’m waiting on ‘Odysso’ and ‘not MacIntosh’…done picked Fuji and Braeburn. And Granny Smith took up space again and produced nothing.

I doubt I could ever ripen Fuji. I removed Rhode Island Greening because it’s a late ripener.

But things can be weird. One year my Winesap were weeks early. This year my Pixie Crunch are late.

So I grafted on Gold Rush! I guess that makes absolutely no sense, but there you have it.

one ripe in June is an early apple

What is your early apple?

I don’t grow any early apples. But my favorites are Ginger Gold and Sansa which I can get at 2 local orchards. Both are ripe now in my area.

Very strange year . Plenty of heat units in June/July and my peaches all ripened about 9 days earlier than normal per variety. My bartlett pears ripe 10 days early. Concord grapes were 14 days earlier than normal. I had to stay up late the last 3 nights stuffing canning jars with pears, grape jelly or grape juice. Feels good to be at work today so I can rest up.

I have lots of young grafts…but currently Anoka and LoWland Raspberry are my earliest.
Have lots of young grafted trees that haven’t fruited.
Among early ones; Red Astrachan, Carolina Red June, May Queen, July Stripe, Summer Rose, all probably June and July. I don’t desire Y. Transparent or Early Harvest…though I’ve eaten both from the tree (or under the tree). Geneva Early I used to have…it’s claim to fame is early…but an apple carried over to June in the cellar might have a similar mushiness and bland taste.

He is in zone 4. My Ginger Gold ripened in August. I’m a little closer to you.

Thanks. I have yellow transparent in July and it’s just only ok…and makes me appreciate pristine. Pristine is nearly as early in July and far better…and actually keeps for a fair amount of time…but bruises very easily.

Mark do you call those square orange slabs cheese?

Ginger Gold ripens here around the second week of August. Picking apples in the middle of summer is a nice change from picking hundreds of peaches.

That is my favorite one!

Cheddar, in fact. I slice them from two pound chubs and nibble on them throughout the day. Probably not what you’re used to in France, though!!

My Ginger Gold tree is in a spot too wet and crowded and the fruit tends to be bland. I know I can grow it well on another part of my property, but it ripens in the heart of stonefruit season and apples are of no interest to me then.

I have to say that my customers like it a lot but probably like Sansa even more (Sansa is a kind of a wow apple just for its extreme high sugar). I’ve decided that Sansa is the nursery variety I will run with, but it ripens a bit later and doesn’t tend to be as pristine. Nor is it as precocious.

I miss an old fashioned grilled cheese with tomato sandwich!!!

One of my favorite sandwiches is grilled cheddar with pickled jalapenos and bacon on whole grain.

We got a 1/4 peck of these from an orchard last weekend and gobbled them right up.

I really enjoyed my Bevan’s Favorite apple, ready long before any others I have. They were pristine looking as well as really tasty. I’m going to try hollow log and Carolina red June to get more early season harvest as a result.

My Hollow Log had its first apples this year. Nicely flavored apples. They were very small in size. Probably an odd year for these apples. Most of my early fruit was smaller this year. My peaches were small and a few other early apples were small. We had some weird early weather which seemed to make a lot of fruit smaller in size by ripening time.
My neighbor has some Winesap apples and all of his apples are small. All his apple trees have smaller fruit this year. Another odd fruit year.