Hello everyone,
Last year I planted a ginnybrook pear tree I ordered from fedco. I planted the pear near a large silver maple tree, the maple is probably around 75 years old and I don’t plan on ever removing it. I planted the pear there because I’m running out of space and I didn’t know how well the tree would grow plus it’s a bit of a novelty. It gets only around six hours of direct sunlight where it is, but after only one year in the ground it’s blooming. The leaves on the tree are large and glossy and the blooms are beautiful. I was considering moving the tree to my front yard where it would get much better light and it’s showy blooms could be seen. Is it too late to transplant the tree this year since it’s blooming or should it be ok? Or since it’s doing well where it is should I just leave it alone. Also I don’t seem to remember much of the description of the pear as I lost my fedco catalog from last year and they didn’t offer it this year. From what I remember it’s a large lumpy russeted brown pear that resembles a potato, the taste I believe was described as similar to Bosc. Does anyone else have any information about this type of pear?
Thanks,
Matthew

@clarkinks mentions it in a couple topics.

I did see one of the posts he commented on this pear. He mentioned the appearance of the pear might be due to stony pit which makes me a bit nervous for my other pears.

I think I have the Fedco catalog from last year. I’ll see if I can find it and give you the description you are looking for.

I found the catalog from last year, I think the tree deserves a better spot than I gave it. Since it is out of dormancy and currently blooming should I wait to transplant it? It’s going to be cool and cloudy tomorrow and than rain the next day might not be bad weather for transplanting tomorrow? Any advice on weather I should move now or later?
Thanks
Matthew

Move it sooner than later, IMO.

I’m going to move it tomorrow, it’s going to be cloudy and cool around 57 degrees and it’s going to rain on Tuesday. The weather all week looks cool and a bit overcast with rain, which should make it less stressful on the tree.

Thanks for the advice,
Matthew

Here is a picture of the fruit Fedco posted! Had I not been a little suspicious I would have been growing it

This is the post regarding novelty pears http://www.growingfruit.org/t/novelty-pears/10474/3
This is the description fedco posted “Ginnybrook Fall. Unknown origin, possibly Belchertown, MA. This is the
largest pear anyone at Fedco has ever seen. Gigantic and very oddly
shaped, like a huge potato, 4" wide and more than 5" long. Even the
smaller specimens are bigger than a Bartlett. Dull yellow skin, mostly
covered with light tan russet. Crisp, perfumy and very juicy. Best for fresh
eating and perry. Introduced to us by Hope Guardenier of Belchertown. She
brought very good perry to the 2013 CiderDays. She gave me two pears.
Wow! We have yet to identify the variety. For now, Hope calls it
Ginnybrook. Ripens in October and keeps about a month. Z4. ME Grown.
235A Ginnybrook,”
Here is what a pear infected with stony pit looks like https://extension.psu.edu/pear-disease-stony-pit 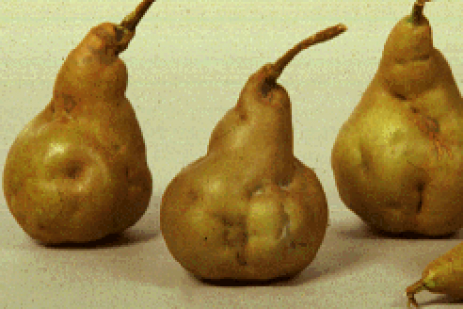 Stony pit is not widely understood and it has not been isolated. Pear virus can be highly challenging to isolate. Here is more information http://postharvest.tfrec.wsu.edu/marketdiseases/pearstony.html. When pear growers become infected by the virus and they grow Bosc they topwork to Bartlett which Is a carrier that shows no symptoms. This puts them back in the fruit sales business but if scions are taken from those trees more trees are infected though there is an absence of appearance of the virus. If you Graft Bosc to the tree you can isolate if it is in fact stonypit virus or if the pits are a genetic variation. I suspect the ginnybrook pear is a Bosc seedling but it’s only a suspicion. If I’m right it explains everything.

Thank you clarkinks for posting the picture and for all the information. I moved the tree on Monday, I didn’t plant it in the front yard but instead put it in the front of a row of dwarf apples on m111 and bud9. The apples are planted with 12 ft spacing and the pear is only 15 ft in front. I know the pear which is on OHxF97 will over grow and shadow the apples eventually, but I didn’t have many other options. I’m excited to see what this pear tree becomes, and I like the odd look of the pears.

Does this still exist? Anyone got scions, Fedco no longer carries it.

The only way you will find out what happened to the pear in my opinion is contact the farm in that area with the name I’m guessing. Again If anyone asks I’d it’s stonypit infected I would say yes that’s my suspicion but it could attract stinkbugs or have other genetic anomalies that cause the pears to have that appearance.

@MatthewInVA
How did the ginnybrook pear turn out for you?

We know the lady who the pear came from is Hope Guardenier and you can read more about her here Hope Guardenier is an environmental educator and lifelong gardener. She’s lived in the Valley since 2001, and in 2007 founded

@alan business is to care for Orchards of the ultra wealthy. Many times when they say they grow pears such as ginnybrook they really mean Alan or someone like him advises them of the care for these pears. I’m not implying Alan takes care of Martha’s orchard at the moment I’m saying he has similar clients. He is a legendary orchardist. Perhaps his clients grow this novelty pear.

Ginnybrook is discussed in other parts of the site eg. Novelty pears?

The Ginnybrook pear does well for me. Its a pretty tree and it grows with a lot of vigor. It has not been effected by blight or rust so far. The blooms are large and it has fruited well this year but the wasps and hornets are getting most of them before they are even ripe. I did get a few last year and they were a bit more russet in color but they managed to ripen fully on the tree. I do not know if I will get any this year because of insect damage. I was away in Baltimore for a few weeks and missed some late season spraying.

Clark you might be right about the odd shape coming from insects. I do not think it is stony pit but the insects go at this pear more than my others. I will post some pictures of the fruit later today. A few years ago you mentioned you thought it was a seedling of bosc and again I think you are correct. The flavor and fully ripe fruit is very reminiscent of Bosc.

@matthewinVA
Thank you for your report on this pear the more pictures we have the better. If the damage is stink bug damage which looks identical to stony pit virus there could be some some that do not have the deformed appearance. As I said before it could be genetics or stony pit virus. I the event it is a virus that does not mean that’s a deal breaker for everyone to not grow it. Once we see pictures of leaves and pears it will tell us a great deal more. 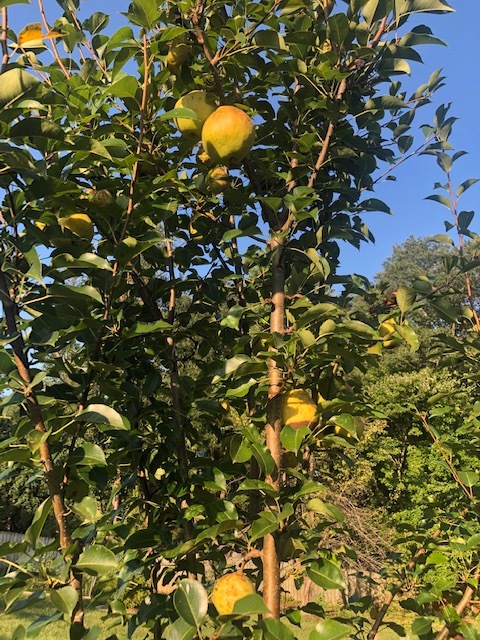 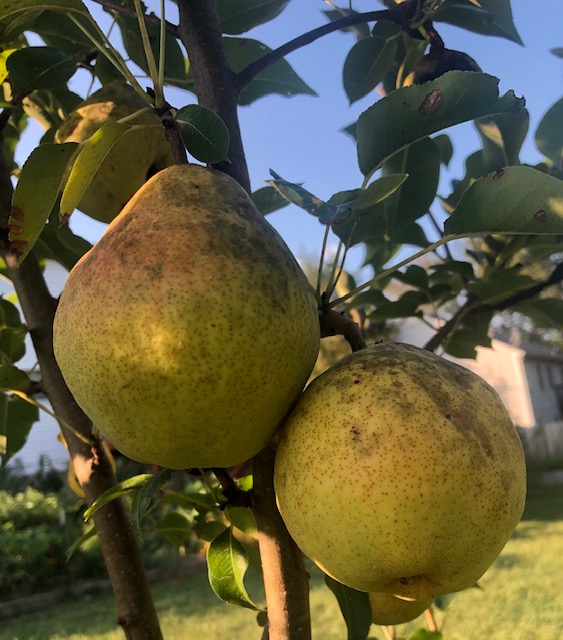 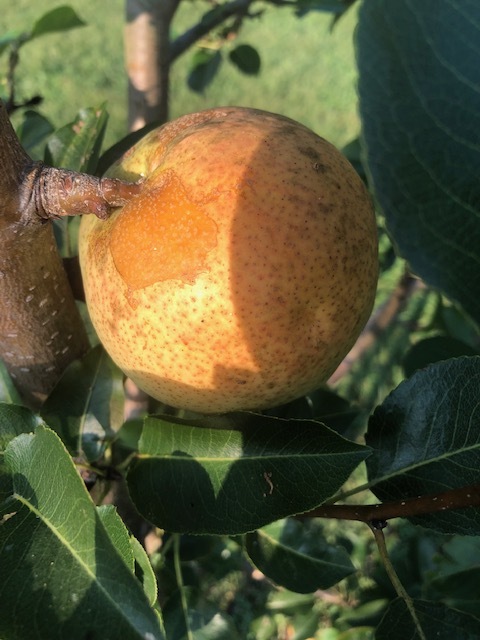 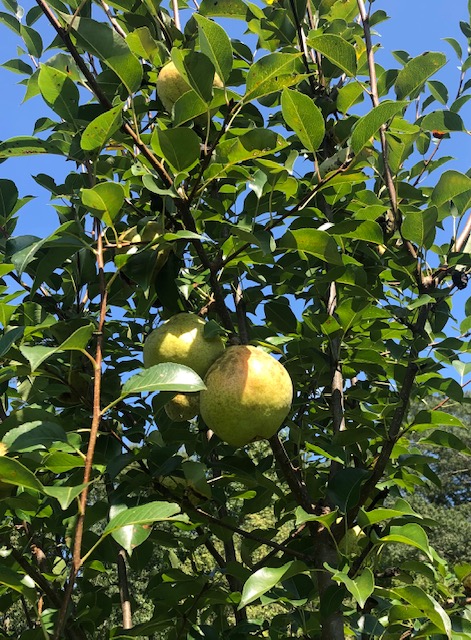 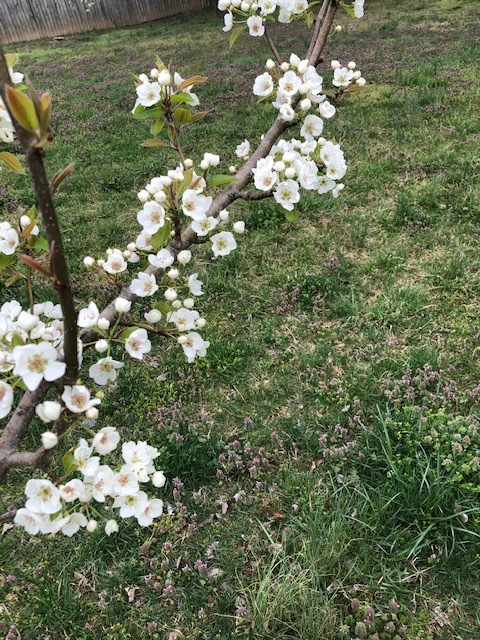 Here are some pictures of my Ginnybrook tree that I just took and a picture of a branch from this spring. Its hard to tell in the pictures but the fruit is large and the leaves are large as well. The leaves are typically a very dark large glossy green but they have gotten a bit discolored at this point in the year.

That tree does not appear to suffer from stony pit virus. Very good looking tree @MatthewInVA. Perhaps you can give out scions when you prune to Corvallis and individuals to ensure the variety will continue. The tree appears to be lost at this time to commercial growers.

I will try to reach out to Corvallis, I have received scions from them in the past so it would be a nice way to pay it forward.

Absolutely we need to do what we can to preserve these varities.

I wouldn’t mind some scion I’ll pay shipping if you have some extra.

Yes they usually log them and say donated by Matthew. It’s a good thing to do and then those of us who do research or trial pears have them available in future years. Grow some fruits so rare I might be the only one or one of 2 people growing them. It’s not a good idea something could happen to me like it does to all of us and I don’t want good varities lost forever. Already did that with a large wild pumpkin (10- 25 pounds+) as a child. We had many that grew wild and produced heavily but now that variety is lost forever and it’s a shame it was better than any other type I’ve seen.

fullplate, I have never sent scion wood to anyone yet and am not sure if I would send it correctly. I think I will try to send some this year to Corvallis as Clarkinks has suggested. I wont mind sharing more scions of this tree in the years to come but the tree is still relatively small and young. Additionally, being a bit inexperienced at collecting and sending scions, I will start with one or two attempts for this year and try for more next.