Grafting isn't always easy - To big for whip and tongue to small for cleft grafting, not a candidate for rind

One of the things I regret doing is not grafting a few of these pears on time as they are way more work to do later. The first tree to graft this year had to be like this. Needless to say it takes a lot of dexterity and some tiny grafting wood to graft one like this over using a cleft graft. When someone sends you small grafting wood this is exactly what those pencil lead sized scions are for. It’s a dilemma because because with thumb sized rootstock wood what else can you do? Don’t get me wrong these are the best trees ever once they start growing out! 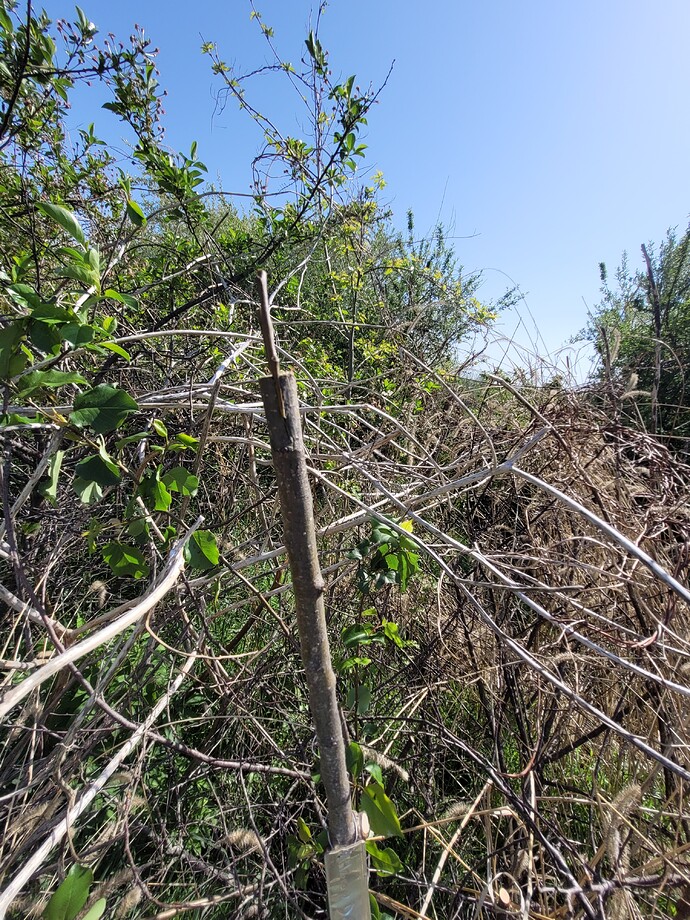 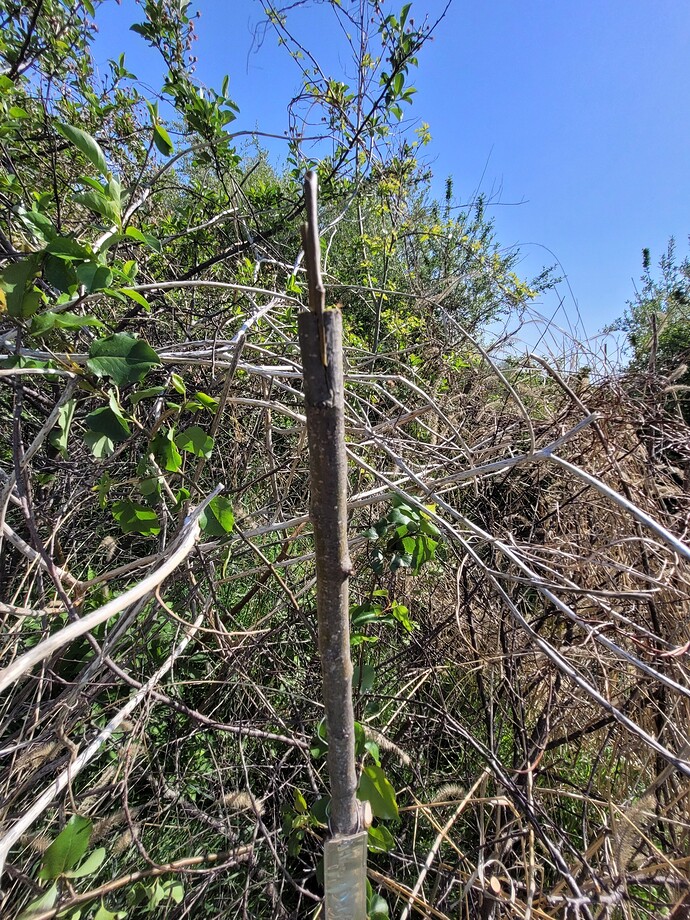 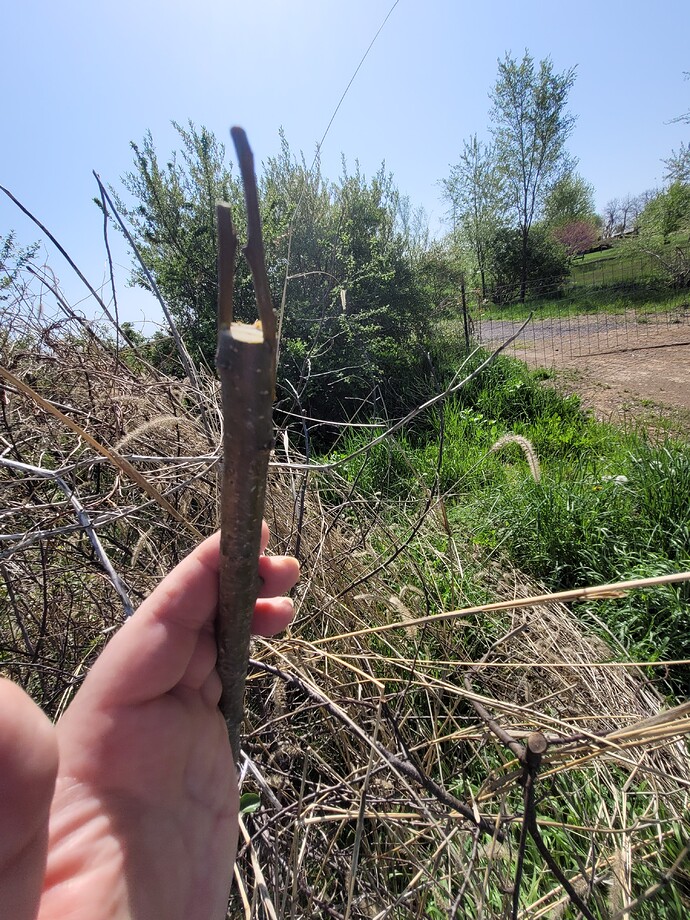 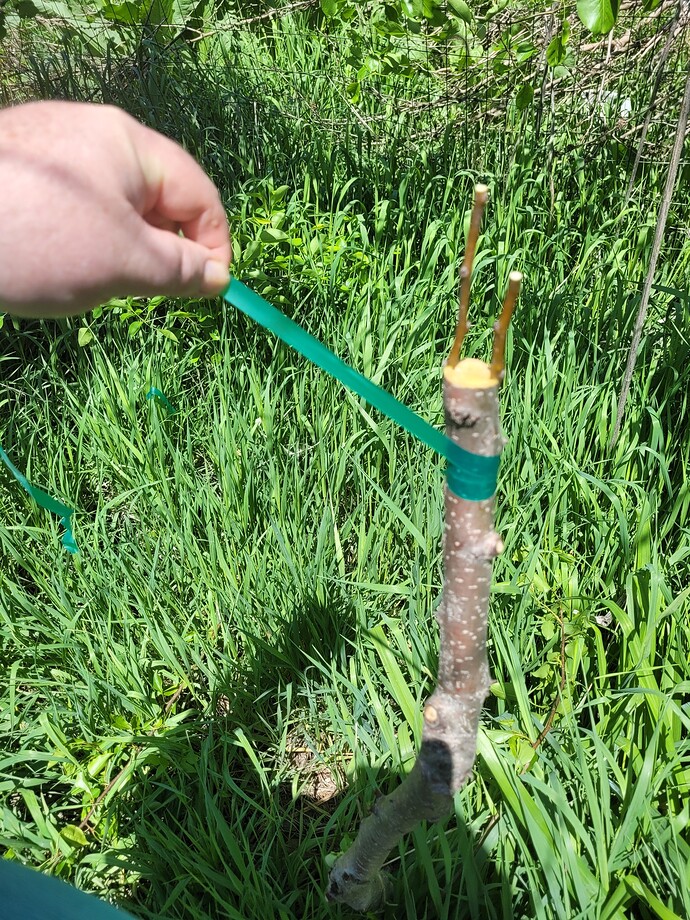 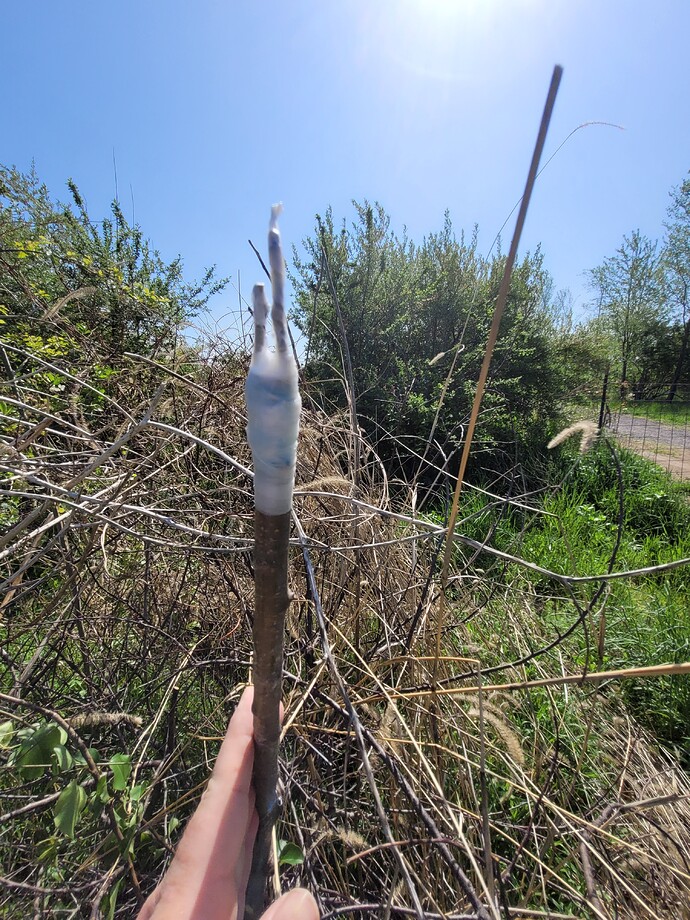 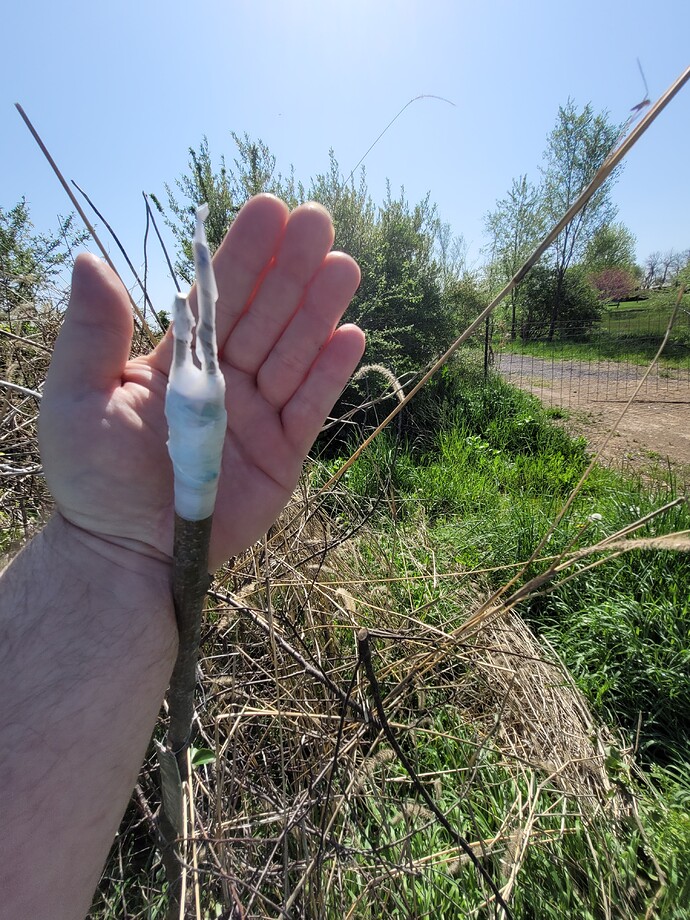 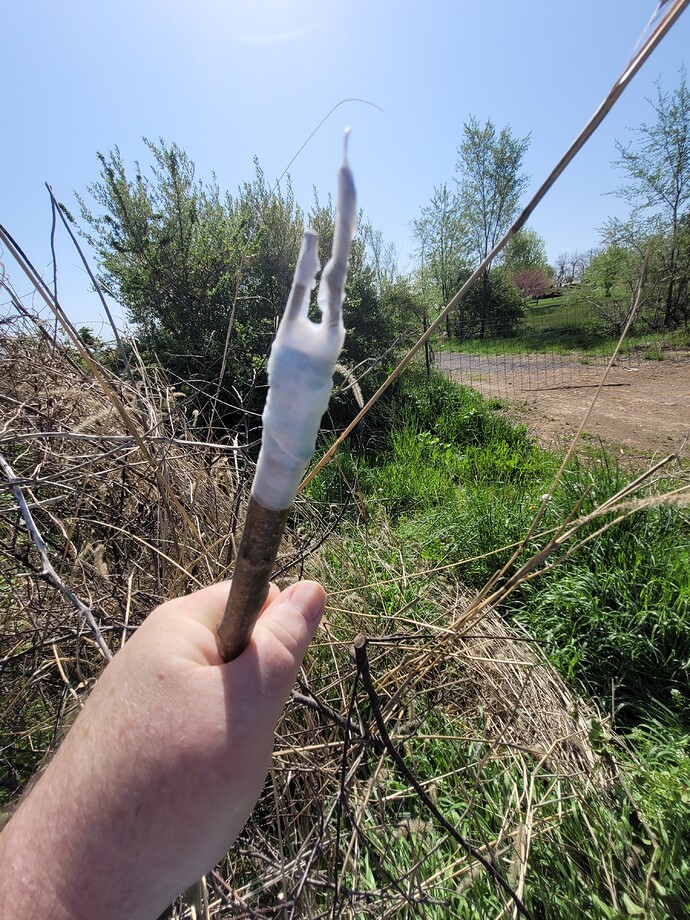 This is the type of graft I’m never proud of but it is grafted to cleft.

My practice in grafting does not exceed citrus, but what about bark graft, -if it slips easily-? does it work

The wood your grafting to is only thumb sized if that. This is a difficult situation with any type of graft. Side graft attempt might have been my second choice. Bark graft maybe but it would not be easy. My idea to tbud it later if this doesn’t work I think was as good a solution as any.

Ive gotten pretty decent at basically a lopsided/offset wedge graft, i just whack the rootstock top off, and do a lopsided wedge on the scion that is like 80% on one side, then cut my slot for the wedge down the edge of the rootstock at a point where the diameter will line the cambium up. On bigger rootstock and small scion often its mostly shaving the bark off the cambium, good contact and seal good.
Works great so far.

I’d like to see pictures of the lopsided wedge graft process.

In such cases if I have only one small scion I would use either a double tongue side graft or a modified cleft whichever seems to fit better. I like the double tongue which is similar to whip and tongue
Dennis
Kent wa

@Dean
I was speaking of this method, it could have a proper name?
It works well for bigger rootstock, I have grafted 6ft up a sapling where it was 1/2" to 2" thick, or down low as in these pictures: 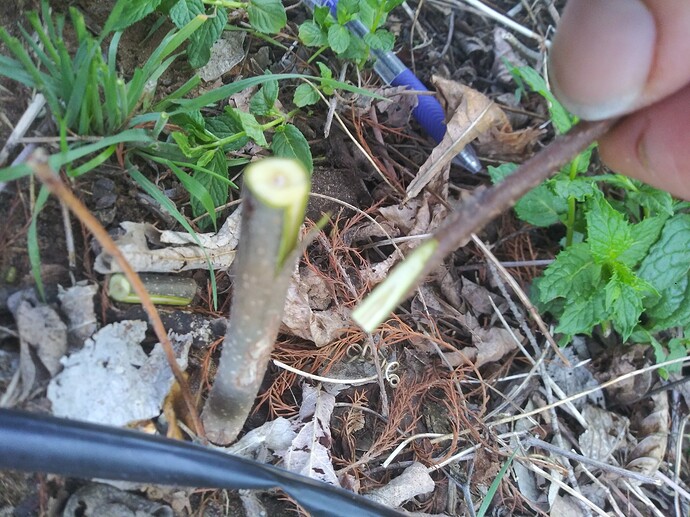 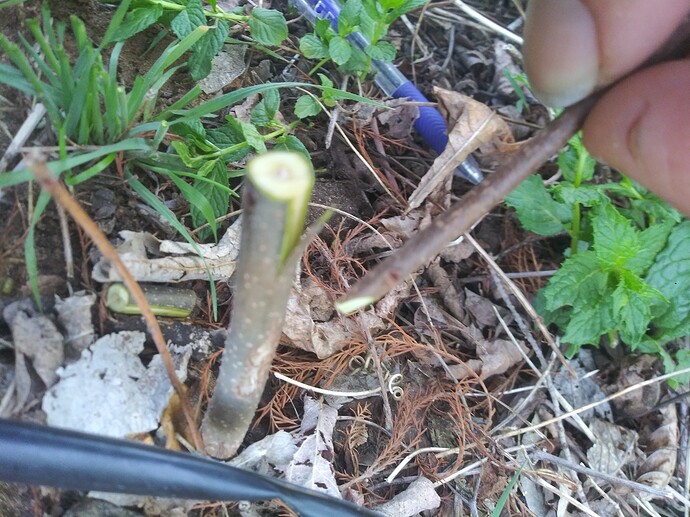 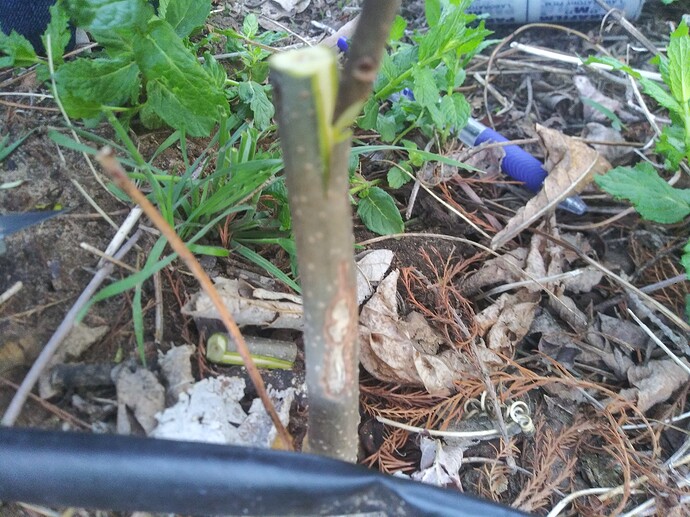 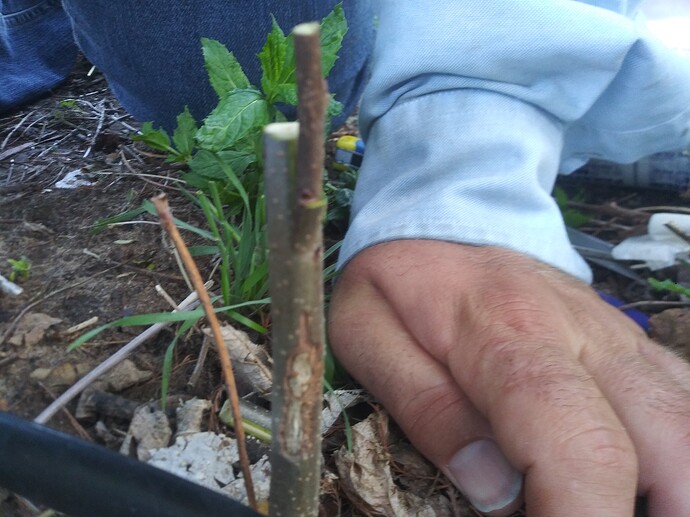 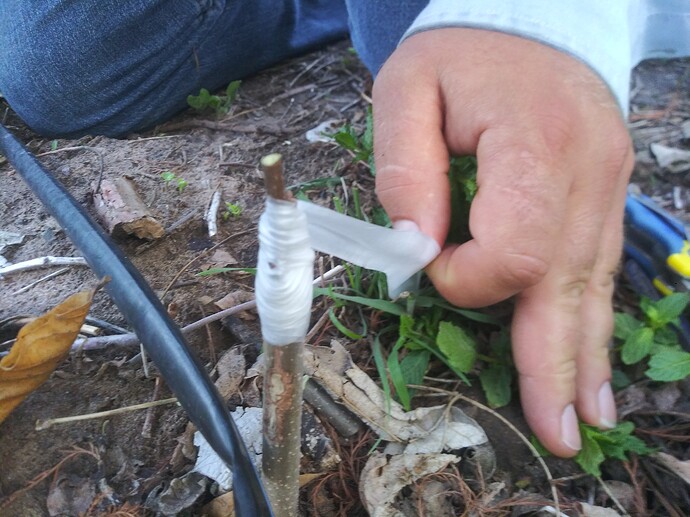 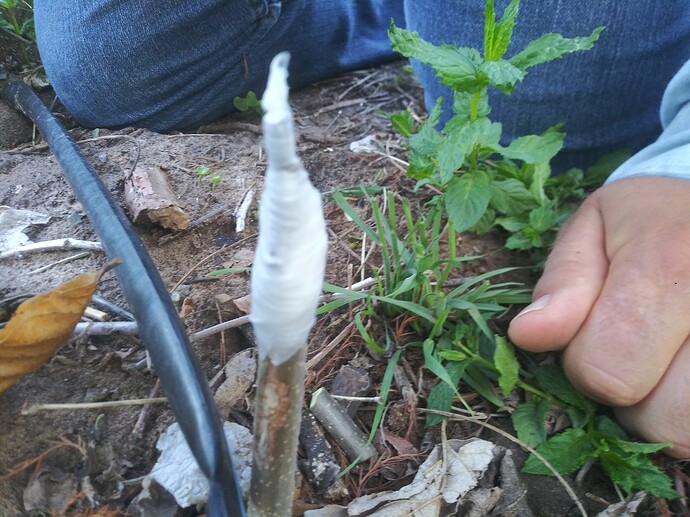 Thats kind of a side graft. See the attached .pdf

This is a concept I really don’t see or hear anyone talk about. Obviously there must be significant downsides to this technique and I’m guessing one of them would be structural strength. In theory it seems this would allow you to put a scaffold anywhere you’d like one but how vigorous would this graft be if the tree was not cut back or topped above the side graft? The linked video shows a man using a side graft on a cherry tree at the 3:05 mark. It appears he cuts a vertical slit in the trun…

Here is another one I did: 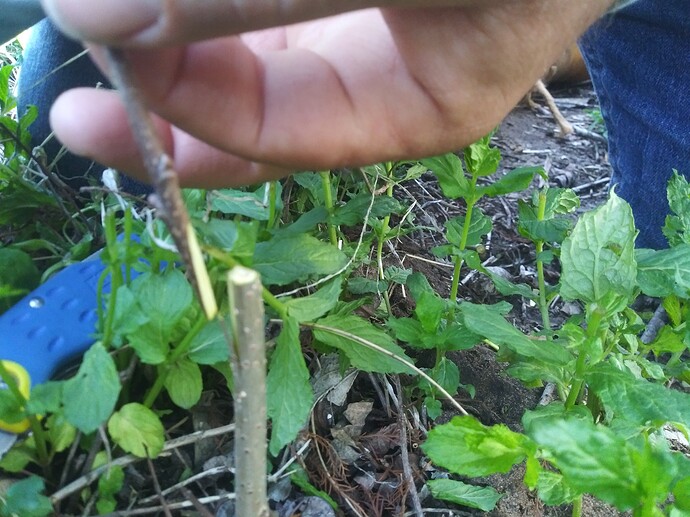 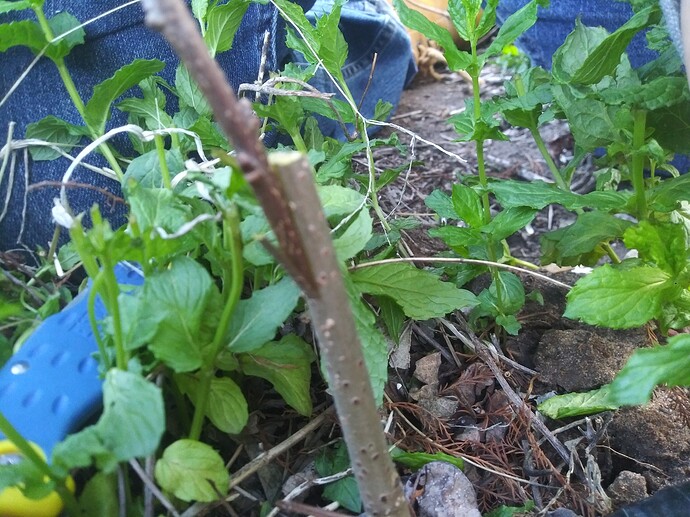 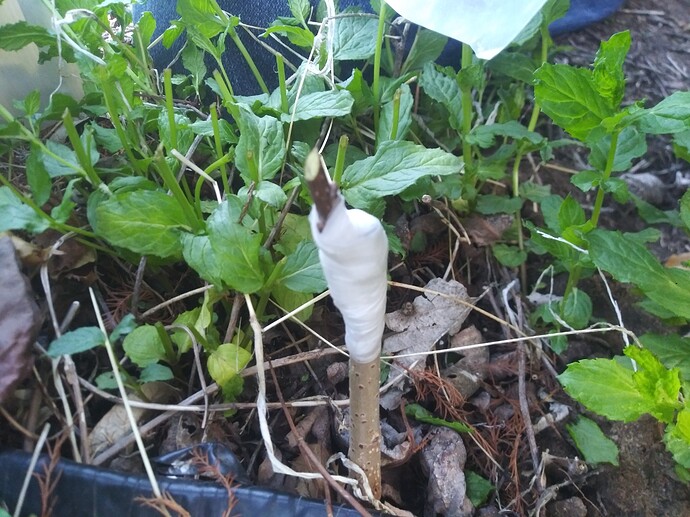 @clarkinks oh ok side graft interesting, yeah its kin to a wedge graft and kin to a Z graft but rootstock diameter makes it be on the side.
I use the Z graft similar idea for bigger scion on small rootstock but its harder.

I sometimes just cut it WAY back and let it form new shoots and just graft onto those new smaller shoots the next year.

This type of side graft is the favorite of Bob Purvis for stone fruits, especially apricots. He doesn’t cut the top off of the main stem above the graft, however, as he says if the graft doesn’t take, you still have a root stock growing for the next attempt.

@PaulinKansas6b
I do a W&T graft on those smaller big rootstock because I can do it quickly with high success. It might look ridiculous, but anything cut off the rootstock is just short term cosmetic, and a year later, it will look like I matched the sizes perfectly This obviously only gives contact on one side, but the Z basically doubles the length of that contact with the extra advantage of some compression in the slit so i don’t have to think too hard about whether I wrapped tightly or not. 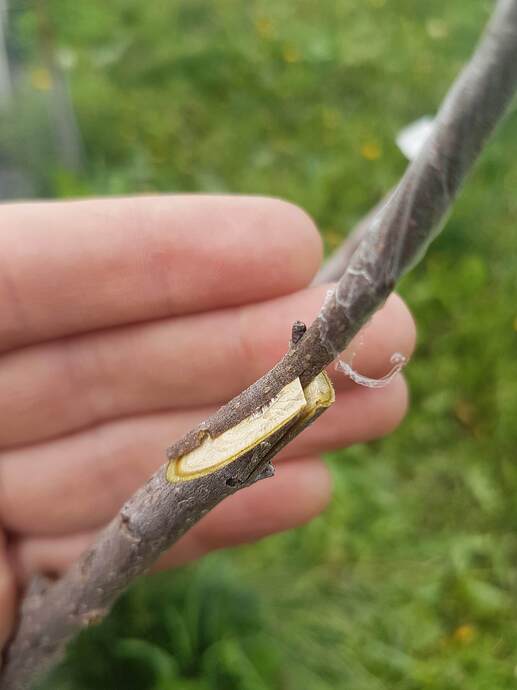 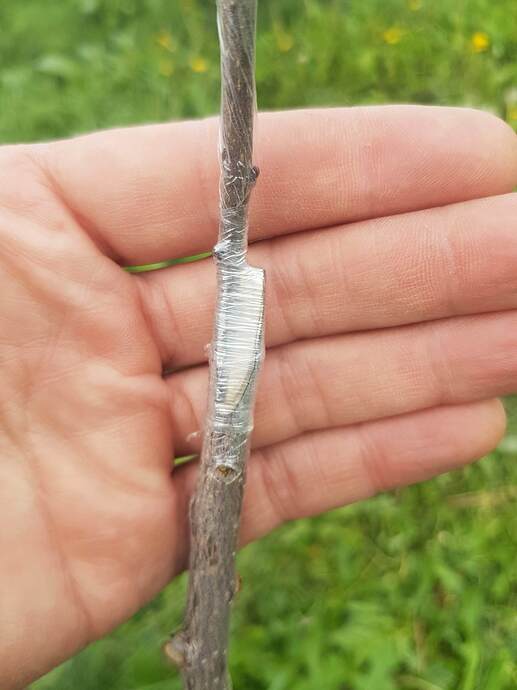 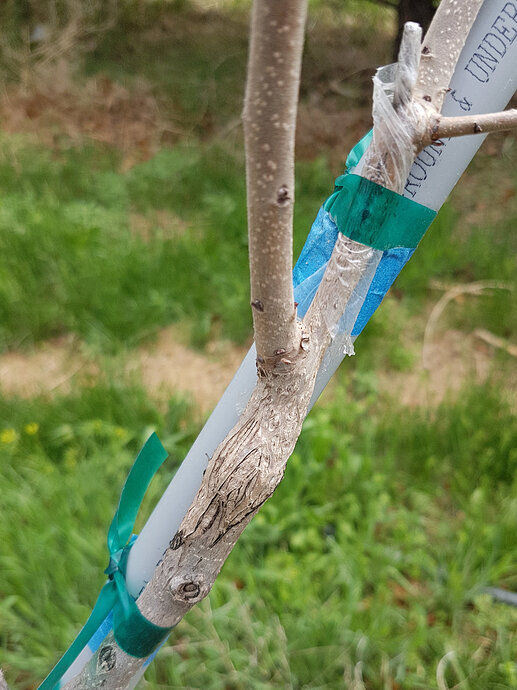 Bark grafts work great on thumb sized host branches I find. Easy and quick and very effective. I generally only use cleft grafts if birds are a problem and sit on the grafted scions and tend to dislodge them.

Birds and wind are both plentiful here. You could stake them.

I will sometimes lash a bamboo stick about 2 or 3 ft. long to the area below the graft, then tie the graft to the bamboo support. This works and I have never had one “blow out” if tied. Only necessary for the first summer generally. The main cause of blow out up here are violent winds immediately preceding a thunderstorm.

This type of bark flap graft utilizes elements of both budding and grafting.

This thread is helpful, I’m going to do some grafting for experiment.

Can you add that comment to the thread that says birds are scarce these days?
Is it the bird flu or the climate change thread, I can’t remember.