I recently purchased persimmons seedlings off Missouri Department of Conservation. I have zero experience with working with persimmons but have grafted apple rootstock for a few years. Anybody have any tips on grafting them? Should I bench graft them when seedlings/scion are dormant? Do I wait for the seedling to leaf out? Not sure the diameter of the seedlings. Should I plant them in the ground and grow them until next year?

I would plant them and graft next year if possible. Then I would field graft when it warms-up (In May for me in PA). When I tried to graft to the small rootstock I had 0/3 takes. When the rootstocks grew for 1 year after the failed grafts, I got 100% takes (with close to 10 grafts).

Thank you for that response. I was leaning towards that and think I might have to do that! When you field graft you suggest a cleft graft? Any pics of your process?

I’m not an expert, but I would plan them out and wait for them to leaf out. With seedlings from MDC you will probably want to let them size up for a year before grafting. I prefer to wait until the rootstock is pushing growth and the weather is in the seventies fairly regularly, although timing that can be tricky in SW MO. Cleft or W/T will work great, it’s just up to what you’re more comfortable with.

I have a couple of videos on how I like to field graft persimmons and on after graft care. The videos aren’t anything special, but maybe they’ll be useful. Following this routine I have 85-95% takes on persimmon. 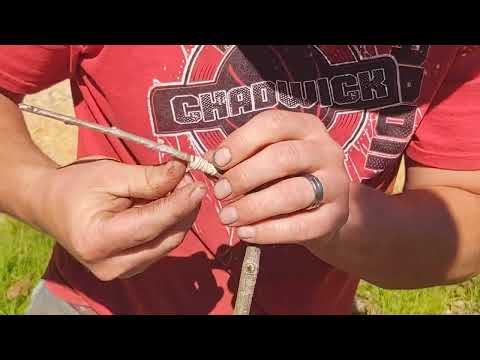 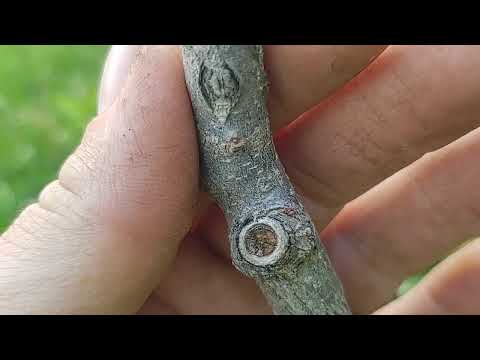 I am located in southern NY. I expect those seedlings to arrive sometime in March. Assuming they are very thin I will plan to plant them out and field graft them next year. Guess if they do better in the 70s I should wait until may next year to field graft if that is correct?

I graft all of mine in the field, on established seedling rootstock, and do a modified bark graft (see linked article), after rootstocks are actively growing and bark is ‘slipping’.
Fist persimmons I ever grafted, I just did simple whip/splice grafts, and got 2 of 2 takes, so many techniques may work fine. Be patient… don’t try to graft too early… they need some warmth in order to callus.
Aftercare is essential…you’ll need to keep shoots below the graft rubbed off, religiously…at least twice a week, for the first growing season. Persimmon is often quite adamant about wanting to push its own shoots at the expense of your grafted scion.

Persimmon rootstock must be actively growing. In my experience (maybe 20 trees), purchased bare-root seedlings require 1-4 months to leaf out, during which time they seem to appreciate consistent watering. So if you bench graft to a new seedling, the scion will dry out and die before the rootstock tree starts growing.

What has worked for me is to plant the rootstock, let it grow a season, then graft the following year. As suggested above, you can plant the bare-root trees in the ground and graft later the same year. But what I did was to plant them in pots and graft a year later. This has three advantages: First, I tend to pay closer attention to the care of my potted trees. Second, delaying lets the tiny rootstock trees grow and thicken. Third, having the trees in pots means that I was able to bring the pots (which had been stored over winter in a detached garage) indoors in early March to give the trees a jump start under lights. In this way, I was able to bench-graft the potted trees at least a month earlier than if they had been outdoors. Once the grafts were established, I planted the potted trees in the ground. The trees put on 3-5’ of growth that season, establishing a strong central leader. As suggested above, I suppressed all growth from the root-stock. In this first year, I also suppressed branching on the central leader. Heading the central leader and forcing branches is a job for the second year.

FWIW, I used whip & tongue grafts, which worked well. Grafting at a bench, it’s easier to match the diameters of the scion and rootstock. Also the healed graft is quite strong. I’ve also used bark grafts on large trees. Bark grafts work OK but I find them less reliable. Also, the attachment is more tenuous that with W&T so the grafted scion is more likely to break off in heavy wind. This happened to me twice – I was relishing the luxuriant growth, then a stiff wind hit the abundant leaves and broke the graft.

I agree with other comments / suggestions above. This is just my 2 cents from a few years experience.

If memory serves me right MDC usually ships in March. May sounds right for your location. Where I’m at its somewhere from mid-April to mid-May. Just keep checking your long range forecast and make a judgment call on when you think is best. In SW MO the temps seem to jump from a little too cool to warmer than ideal, but they haven’t seemed to mind the extra heat. Just make sure to keep up with removing new growth from below the graft and they’ll do fine.

Should I plant them in the ground and grow them until next year?

That’s what I did. Persimmons take a long time to get established after being transplanted. Some may even show no growth until the next year.

All types of grafts work, choose what you’re comfortable doing and/or adjust based on wood size.

After grafting a persimmon, it’s important to diligently rub off all buds emerging from the rootstock, otherwise they will grow and outcompete the graft.

As folks have said here, if you know where you want them and they are destined to be in the ground somewhere, plant and then graft next year is the easiest and may give you the best results.

That said, many here have used a hot callus pipe to graft bareroot rootstocks of persimmons and others. I used the MDC persimmon seedlings and built a pipe and had 65 out of 70 or so take and grow well. I basically bench grafted them, put them on the callus pipe for 3 weeks and then put them into tree pots. Of the ones that failed (all one variety), I’m pretty sure the scion wood I had for those wasn’t viable, so using the pipe can be quite effective.

Hot Callus Pipe DIY credit: Ryan Russell WALNUTS - do not graft using this callusing system. Pecans, hickory, hican, over 90% success. YOU MUST ELEVATE THE UNION SO IT IS NOT TOUCHING THE CABLE !!! ALWAYS KEEP THE BUD OR BUDS OUTSIDE OF THE HOT CALLUS PIPE THE REASON BEING THE BUDS WILL “WAKE UP” BEFORE THE GRAFT UNION MAY HAVE ADEQUATE TIME TO CALLUS. CHIP BUD GRAFTING WITH A CALLUS PIPE MAY BE DONE BUT BE AWARE THE BUD WILL NEARLY ALWAYS BREAK DORMANCY AND BEGIN GROWING INSIDE WHERE …

Be aware that the seedlings are pretty small caliper, so if you are grafting them this year you don’t want big scions unless maybe if you are doing chip buds. When I’ve bought scion wood I’ve found some sellers can have some pretty big scions that really aren’t useful for smaller rootstock.

What kind of tree pots did you use?

I used 4x9 for the smaller ones and 4x14 for the larger ones. They are quite varied in size, so it is nice to have choices, but if you just get one size I’d get the 4x14.

Let’s say I get the trees and they are too small. Can I leave them in this pots all year and graft onto them next year? Would be easier to move those around

Yes, I’ve kept them in the tree pots for a couple of years, both ones I had grafted and others I didn’t get to one year so kept for the next, but they don’t grow super fast in the smaller size pots. They seem to really start growing much faster once they’re in the ground and settled.

Let’s say I get the trees and they are too small. Can I leave them in this pots all year and graft onto them next year? Would be easier to move those around

That’s exactly what I did, though I up-potted to 3 g pots. This will be my 3rd year using this approach. Moreover, I bring the potted trees indoors early. In a warm basement under lights, they leaf out well ahead of the outdoor schedule. Once they are leafed out, I’m able to graft indoors.

This approach also permits me to graft multiple copies of each variety with flexibility about how I use the results: If one grafted tree seems stronger than another, I can plant the stronger tree. If two or three grafts from the same variety all succeed, I can give a potted tree to a friend. And if a graft fails, I can let the rootstock grow for another season and try again next year.

Maybe I’m overly ambitious but this year I have brought the potted dormant trees indoors very early – just yesterday. I expect to graft them in late Feb / early March. Any successful grafts should be growing well by early May when I can move them outdoors.

The consensus seems to be to plant seedlings and wait a year to graft. I got lucky and was able to upgrade my seedlings from 12-18" to 24-36". Would these be big enough to graft it should I still wait until next year? I assume there will be some variation.

Also remember – it’s critical for the rootstock tree to be growing. As I said, it can take months before the planted bare-root tree starts to grow. You can’t manage a successful graft otherwise. If you have to wait until July before your new seedling tree leafs out, the scion wood may have deteriorated.

Grafting in the 1st year would work best if (1) the rootstock is thick and (2) the rootstock leafs out quickly. Otherwise it may be best to plant the tree and wait.

Also remember – it’s critical for the rootstock tree to be growing. As I said, it can take months before the planted bare-root tree starts to grow. You can’t manage a successful graft otherwise. If you have to wait until July before your new seedling tree leafs out, the scion wood may have deteriorated.

This isn’t exactly true Joe. I’ve regularly grafted on dormant rootstock with near 100% success. Just did it again a few days ago.
Thanks to the magic of the callus pipe. 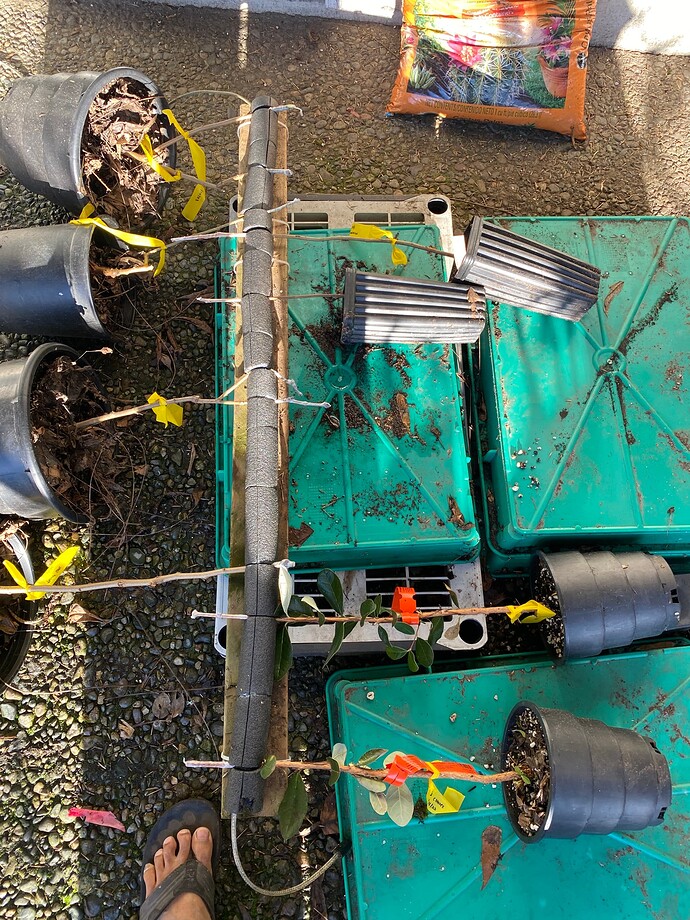 @ramv – LOL. OK, I defer to your superior experience. I know that you’re credible, so if you say it works then I believe you.