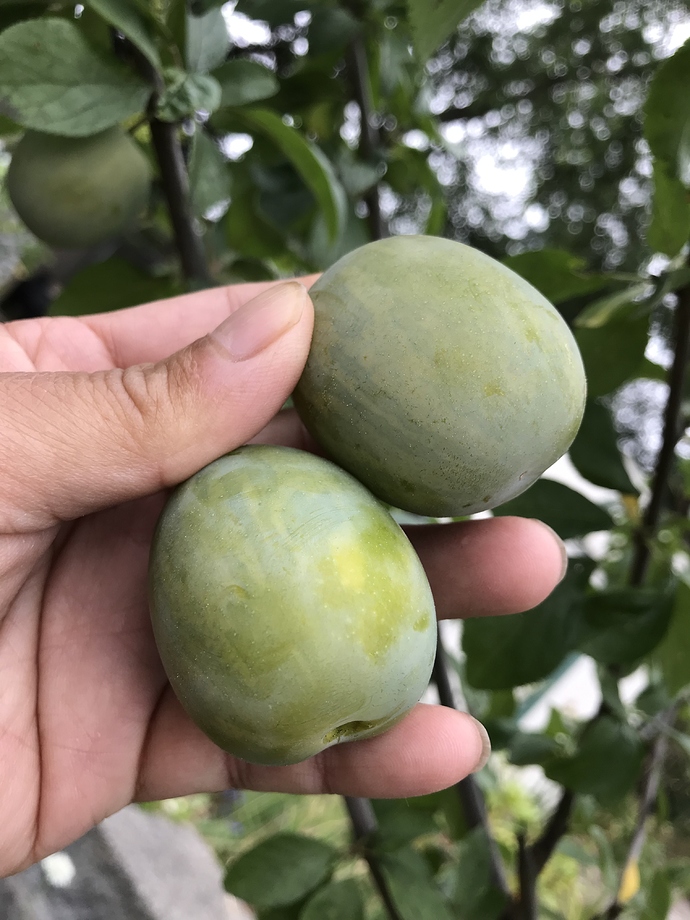 has it too.
I only had a pair this year, but they looked identical to Old Green Gage, and weighed in at 23.3 and 23.5 Brix. They had the shape, pink flecks on the skin, and gold color on the sunny side. They were delicious in their second leaf, and struggling in a container.

Thank you for the information on the previously unknown Reine Claude Verte strain,

Just curious, since I’m still learning what does it mean by second leaf?

I figured Doree was the same a Old Greengage based on this comment: Reine Claude Doree plum trees for sale from Orange Pippin

Second season in the ground means second leaf. A plant may be 1 or 5 years old when it is planted, but time in the ground matters greatly when considering yield.

Even here in NYS Green Gage is mediocre on a tree I have that is shaded for a few hours during the day and far inferior to the fruit from a tree I manage with dawn to dusk sun. No other plum I grow seems so dependent on full sun to achieve high quality. On its best years in this site I never know if the plum I pick is going to be sweet until I taste it, making the fruit virtually worthless to me. I’ve mostly grafted it over to plums the work better there.

Even at its best here, Green Gage is jus one of many great E. plums you can grow and it is more prone to cracking than some others. We can’t control the rain.

This is my tree I took a few years ago. It’s loaded in the summer and it’s up in a bank, probably shaded by the neighbor’s house. 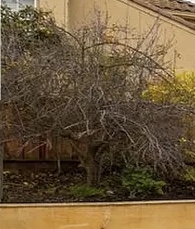 Uninterrupted sunny days and reflected light might make up for a lot of shade. The best 20th Century pears I ever ate here were espaliered against a southern wall. They got a lot higher brix than if it was grown as a natural tree out in the open- or at least compared to fruit from trees grown that way on other equally sunny sites I have managed.

I’m in Costa Del Sol, the green gages here are much better tasting than the ones we got from London. It’s got to be the sun. The name is cicruela blanche, I hope I didn’t mangle the name.

Hi Richard! Can I ask where you got your Bavay gage from?

It is pretty commonly sold … I think I got mine from Raintree.

Looking through the discussion above I am surprised to see Andy Mariani thinks all the green gages are very similar. For me Bavays is the clear winner. It is smaller but more flavorful, more crisp / less stringy, and more sweet than Green Gage. And Green Gage is itself awesome. I am grafting over my Golden Transparent Gage to Bavays this summer, GTG is fine but is several tiers down from Bavays in my orchard and is also not up to regular Green Gage. GTG is also for me super bug prone and half or more of the fruits are doubles … it just doesn’t seem happy.

Is Bavays any earlier than Golden Transparent Gage? GTG is a little too late for me, I think.

Yes GTG is the latest gage I grew. All are somewhat late.

Thank you! I know it’s self fertile but are there any pollinizers you recommend?

Any Euro plum should work … at least in my orchard they all bloom around the same time.

I got a Bavay’s Green Gage and Green Gage last year without doing much research into it. Apparently I got the best tasting gages and for what it is worth both my gages grew very well. In one year I cannot reach the top of my gages. Supposedly I live in a good area for plums though.

There were a tonne of green gage plums in my area back in the 70s. I’m not old enough to remember them, but people who do tell me stories of how lovely it was to pick them right off the trees, as many as you could pick. Unfortunately black knot made its first ugly appearance here some time in the 90s or 2000s and now any plum trees anywhere are barely alive, covered in black knot, and haven’t fruited at all in decades. With the wild cherry populations here, there will always be a reservoir, so fresh plums are unfortunately simply off limits for me. To the green gage growers in the thread: have one for me next season!

Wow! Do you do anything special for the trees/soil? How old is this tree, can I ask?

Do your late plums continue ripening even when the weather gets cool & wet in fall? We have dry summers here in Seattle (summer rains are rare) & it starts to rain by the 3rd or 4th week of September. I’m wondering if that will harm late ripening fruit?