I love ground cherries (Physalis pruinosa)—but have been experiencing a frustrating problem for the past several years. At some point in the season most (and sometimes all) of the plants will languish, display stunted new foliage, drop fruit prematurely—usually after little to no production—and then wilt and ultimately die. Sometimes necrotic spots will appear on the leaves—though I was never sure whether it was related to the problem or if it was an unrelated foliar disease or cultural issue—, and some of the fruits will display pale spotting/mottling and even slight deformation.

I thought for a while that a soil-borne pathogen might be the cause—maybe verticillium; so this year I took measures to ensure excellent root drainage, planting the ground cherries in a ridge. I also started them earlier this year—on February 15—and up-potted them and grew them out in bigger pots before planting in the garden in May. The idea was that bigger, healthier plants with more root mass would better resist infection. In addition, all plants were inoculated with mycorrhizae and the site dressed with neem cake before planting. It worked . . . for a brief while. One of my plants started wilting a couple of weeks ago and is now in a state of complete collapse. And two more are now following suit. They produced some before taking ill—but that is undoubtedly because they were older, bigger plants when I transplanted them into the garden and exposed them to whatever pathogen this is. I’m also seeing some of the other old, familiar symptoms on these ones: including the discolored fruit. 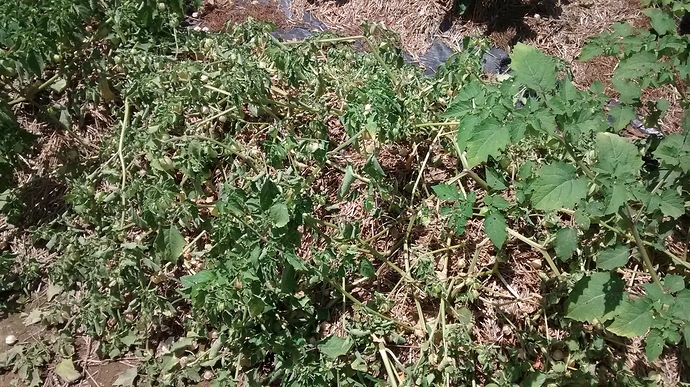 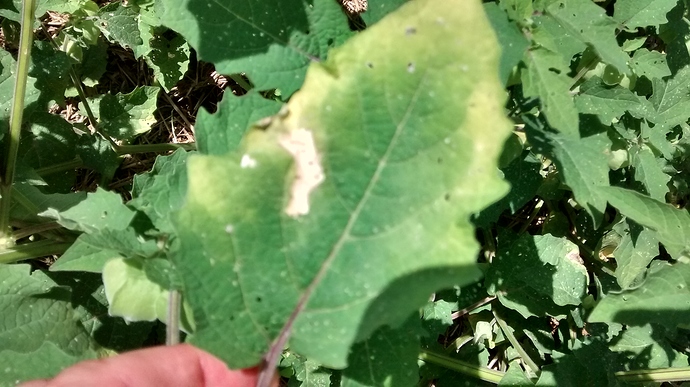 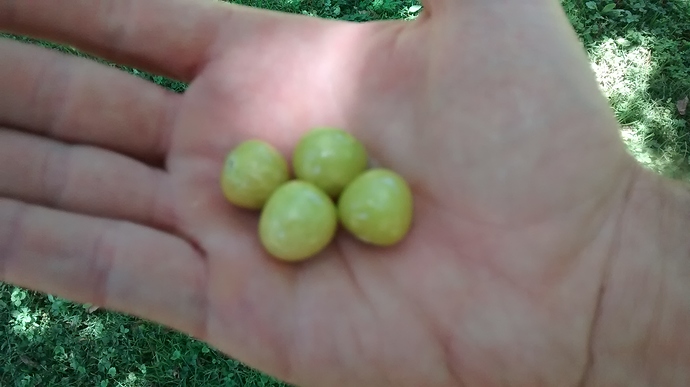 Spotted, mottled fruit, dropped before fully ripe. (Sorry for the picture quality; that’s the best my camera will do.)

Maybe it’s not soilborne. So I got to rethinking the problem. The discolored fruit made me wonder: could it be viral? Could a virus cause wilting? Yes! Tomato Spotted Wilt Virus (TSWV). This virus, which infects a wide range of plants, causes variable symptoms, depending on host—and fruit discoloration, leaf necrotic spots, wilting and fruit drop can be among those symptoms. Many weeds serve as a host for the virus. And what vectors it? Thrips; and this place is lousy with them.

So is TSWV or a similar virus the cause of this mysterious ground cherry decline disease? If so, the only thing I can do is control thrips—which is not easy. Spinosad kills them, but they can build up resistance. So I’m considering routinely treating ground cherries and other nightshades and susceptible plants with an insecticidal fungus such as Beauveria bassiana, with occasional spinosad applications. Perhaps neem oil is another option?

I’m beginning to think that this same pathogen may also be behind some of my other losses in past years—especially of other nightshades, and sweet peppers in particular. Whatever it is, ground cherries are extremely susceptible.

Has anyone had a similar experience with ground cherries or closely related plants such as tomatillos? Any other ideas about what this might be?

The leaf picture might suggest Potato Leaf Hopper (yellowing edges, possible cupping). They show up at some point in the growing season by catching a ride on storm systems coming out of the south. Haven’t really known them to cause complete plant collapse but I suppose it’s possible.

Very possible, Don. Thanks. I believe I have seen them here (along with umpteen other different species of leafhopper/sharpshooter).

Speak of the devil… Potato leaf hopper on my figs. They seem to prefer Mary Lane but some evidence of their presence on Chicago Hardy too. 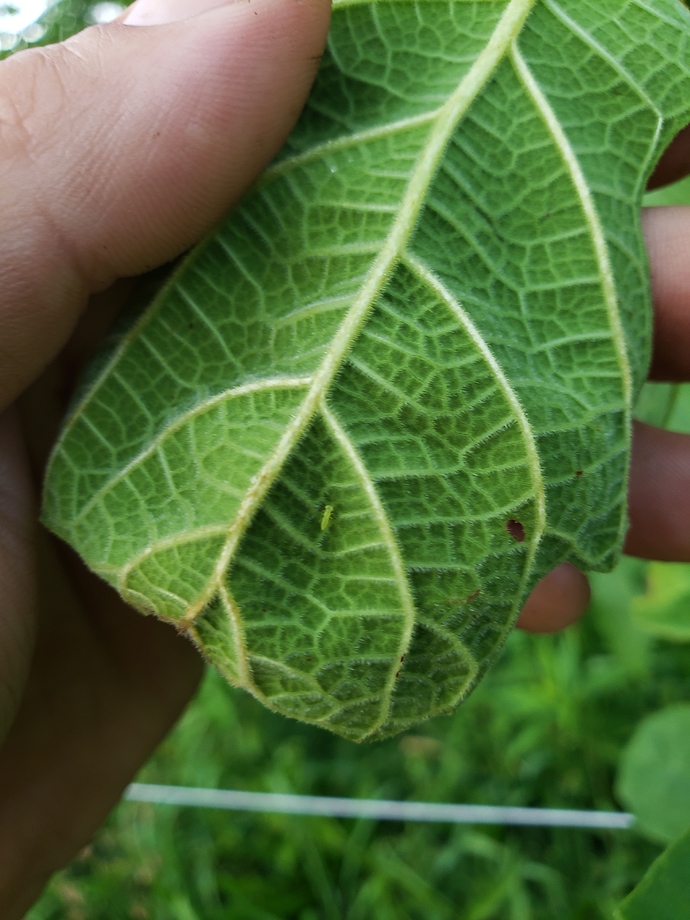 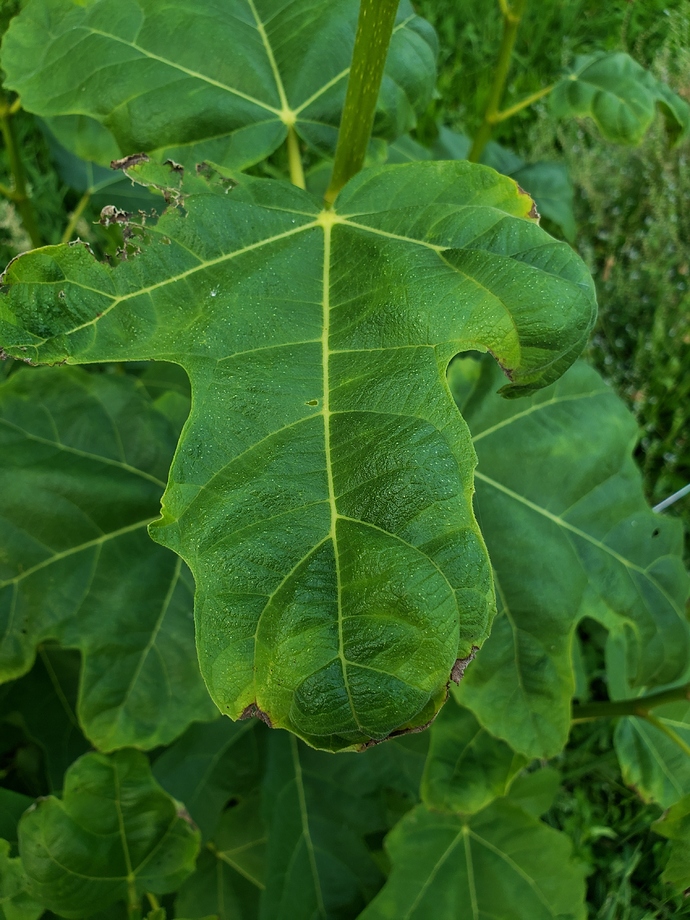 @hoosierbanana Ever see this before Brent?

Not that type of hopper, no. The larger ones seem to cause no damage that I can see.

UPDATE: Almost certainly a pest-vectored disease. Ground cherries regularly treated from early stages with rotation of neem/karanja oil and spinosad are still alive and productive; non-treated ones wilted and died before becoming productive. Have not seen ground cherry plants this large or productive in years. Can’t be sure, but I still suspect thrips and a virus.

Anyway, if your physalis plants are mysteriously collapsing, this is something to keep in mind. 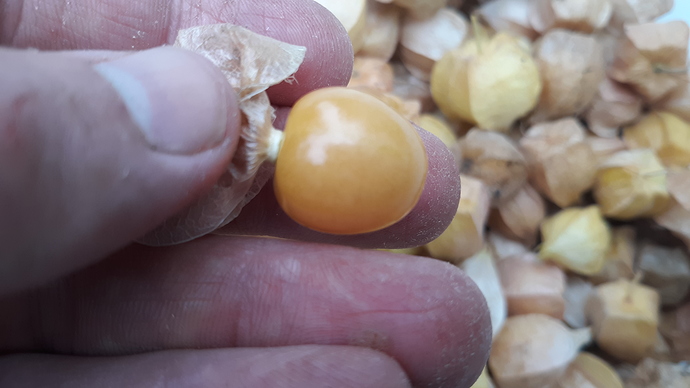 I’ve grown there for several years now in containers. nothing seems to bother them here so far. how big do your plants get? I’ve had some 4’ x 4’.

Biggest is about 8’ X 6’ in sprawl, and very low-growing. Of course, they’re in the ground. Fortunately, they’re trouble-free for most folks. But I’m generally unlucky when it comes to “trouble-free” stuff!

I think they’re a very underrated little fruit. Tasty fresh or cooked (especially in pie form!) and easy to grow (for most!).

What is the spray Schedual your spraying?
Just every week in the early stages I do not know anything about it really.

How are these Doing this Year for you
I’ve picked some wild one by the river, and chinese lanterns ,
but that’s good to look out in this happens.

We should all find our wild ones, and share the genetics among each other
Is there any Variety you grow ?

Now I am going to try to go by the river, and see if I can re find them
The invasive buckthorns crowded that place though, and they probably get mowed down
it is maintained by the wacky park district ,
(clean up a fallen tree to make it look manicured ,
but not clear invasive buckthorn and when they do it’s after they go to seed when the leaves fall off to avoid Round up spray damage of other trees’ so everything is just thickets)

I’ve not had the exact same problem but I do get mold inside the husk that ruins the berries. I stopped growing these because it made my children sick. It’s sad because they used to be just delighted by picking and eating handfuls of ground cherries. Because the mold has been inside the husk I have not sprayed but I wonder if spraying early is the way to go.

@JeremiahT
I have a different issue.
For decades I have had volunteer ground cherrys in my garden.
I would let them be , big plants ,good fruit, they would reseed.
This year, many volunteer plants, but the plants are small, stunted,fruit is really small green , not turning orange.
No wilting , just most plants are stunted.
I also suspect a virus, ?
As these are from the same genetics of the soil seed bank that has been good for decades.

@Francis_Eric I sprayed once a week, alternating between spinosad and neem/karanja. Stopped about mid-season, and now, at season’s end, I’m noticing some of the same symptoms, including premature fruit drop and discoloration. No wilting—and this could be because of our milder temperatures now—, but I have had some with severe defoliation. A couple of plants have done a lot better than the rest—and they are volunteers. I’m going to save seed from these and see if I can get a strain that better resists whatever this is—and I do think thrips are somehow involved. If that doesn’t work, the spraying does seem to work, but it requires persistence.

I believe most of the cultivated ones (with the exception of Cape Gooseberry/Poha, which is P. peruviana) are P. pruinosa, which is Latin American in origin. I’ve grown several cultivars, including Cossack Pineapple, Aunt Molly’s, and Mary’s Niagara; all are very similar, though Mary’s Niagara is earlier and even lower growing than most.

I very much like your idea of experimenting with native physalis plants. There are at least a half a dozen different ones, and I have a hard time differentiating among them. I see them growing around here, but have never known them to ripen fruit—which could be because of critters, or the fact that they’re growing in a frequently mown field and so never get the chance. I’m going to see if I can “domesticate” some of these and perhaps determine what they are and if they’re worth growing/eating. I know that some folks have put the perennial clammy ground cherry (P. heterophylla) into hobby cultivation, but I don’t know if that’s we have or not. (If I remember aright, the Experimental Farm Network has offered a strain of this species in the past, but don’t see it listed in their store now.) Anyway, we’ll have to keep each other posted regarding what sort of wild physalis plants we find.

@Katie_didnt_Z4b I’m very sorry to hear that. It’s not a problem I’ve noticed here. Are you growing any particular cultivar? Perhaps there is one that won’t have this issue? A kid-safe fungicide (perhaps potassium bicarbonate?) would probably not be a bad idea.

@Hillbillyhort That’s a bummer. Have you noticed any discoloration of the fruit? I see a lot of spots on the fruit dropped by my sick plants. Maybe a bad thrips infestation in and of itself would be enough to stunt, discolor and cause premature fruit (or maybe even leaf) drop? Have you seen any individual plants that display some resistance? I very much hope that your ground cherries are just having an off year—and that they’ll be back to normal next year. Keep us posted.

Jeremiah, where did you get the Mary’s Niagra seed?i have a hard time getting a decent crop of ground cherries as our summers so short. bet these would work better for me.

Steve, I got them here. If you have trouble getting them—seed seems to be selling out fast everywhere—, I think I have a little seed still in the freezer. It would definitely be a better cultivar for your zone.

thanks. they should come back into stock sometime between now and spring.