Many times i see people interested in these pears but usually for other purposes than facts.

It is my understanding that harrow sweet bears fruit early. That would be my main reason in choosing it over other pears like a Warren. Kind of likes apples there is so many great pears out there it is hard to decide on varieties. This past year I decided to plant a few of each kind of fruit tree I like from the grocery stores and some experimental varieties. I went with pears, apples, peaches, almonds, plums, paw paw, persimmon, cherries and interspecific hybrid of plums. I found the peaches easy to narrow down to a donut peach variety for their sweetness. Almonds were easy to narrow down because not many are hardy to zone 5. Plums were fairly easy to narrow down due to sweetness in colder areas. Paw paw were a bit harder because there is not a lot of information on a lot of varieties and all variety seem to change in terms of taste variance. Persimmon was pretty easy because not many are hardy to here as well. Then I got to apples and pears. There is so many good varieties that it is hard to narrow those down and all seem to be hardy to zone 5. Do I want a pink lady, honey crisp, fuji, something more uncommon like a Zestar!. All sound good. Same with pears. Do I want to go with the common Bartlett I can go to the stores to get or do I go for the prized varieties many love like the Seckle, Comice, Warren, Magness or do I go for the more unknown ones like the cascade pear where it is a child of Comice and Bartlett so you get a long storage life of 8 months but unknown about taste. That is the part I found hard about pears. There is less information about a lot of pears taste than apples. I always find a good pear better than a good apple but a good apple better than a bad pear. Part of the issue is people don’t know how to properly ripen pears too. I hear you have to pick pears 3+ weeks early and refrigerate them to ripen. Otherwise you likely get a pear that will be partially inedible. I think I saw what happens when you let a pear fully ripen on the tree when I saw a review of the seckle on YouTube. I will have to ask on how to properly ripen the fruit on here once my trees start to produce fruit. I remember I first joined this forum and someone told me fruit growing is a lot harder than vegetable growing. I agree it takes a lot more knowledge as well as patience and it is the ultimate reward crop when you get the knowledge and patience.

As far as in general good pears all the way around Harrow sweet and Harrow delight rank very high among pear growers. They are easy to care for and taste good. There is so much good fruit so I’m not going to say Potomac pear or Maxine or Karls favorite should not be equally as popular amongst pears. Early golden among others are incredible persimmons! The problem is you have no way to know that as they are not offered in the store. Ate these in the photos from an orchard in Lawrence ks. See the attached photos. Research more on this website is the best way to find out just like your doing. There is much more I could say but there is hardly time to say it. 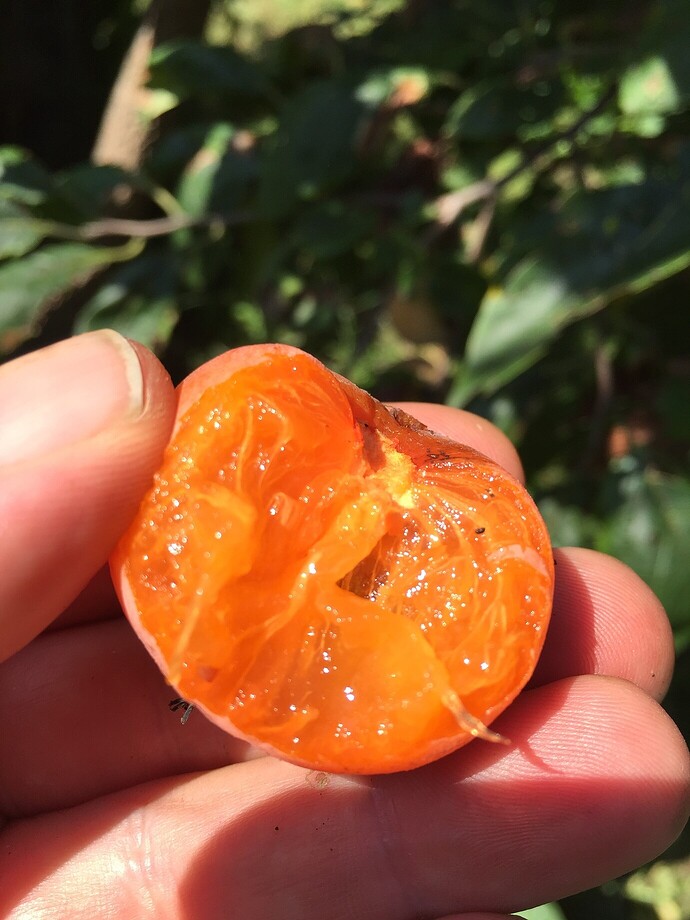 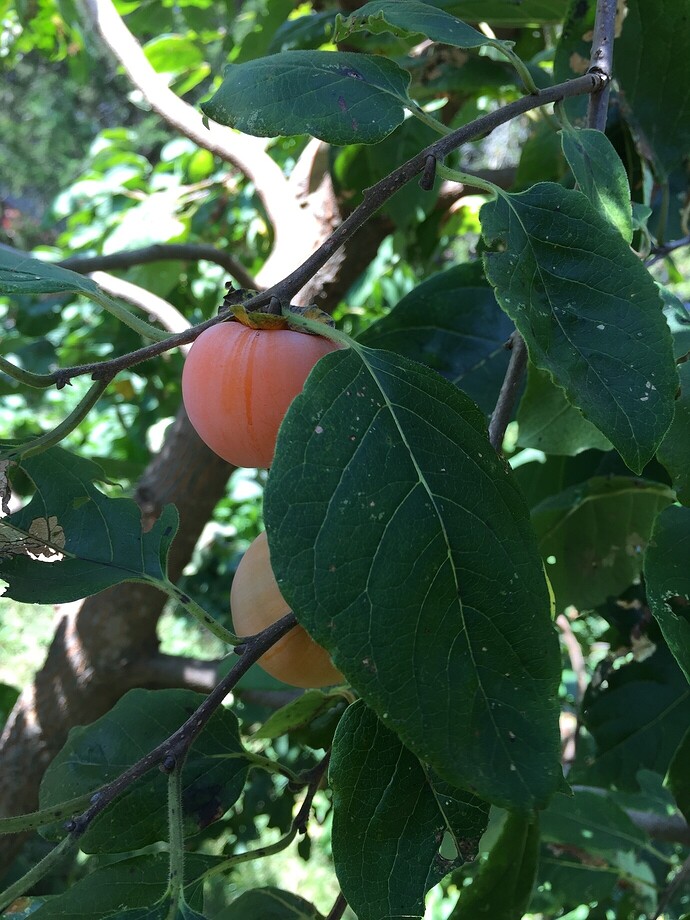 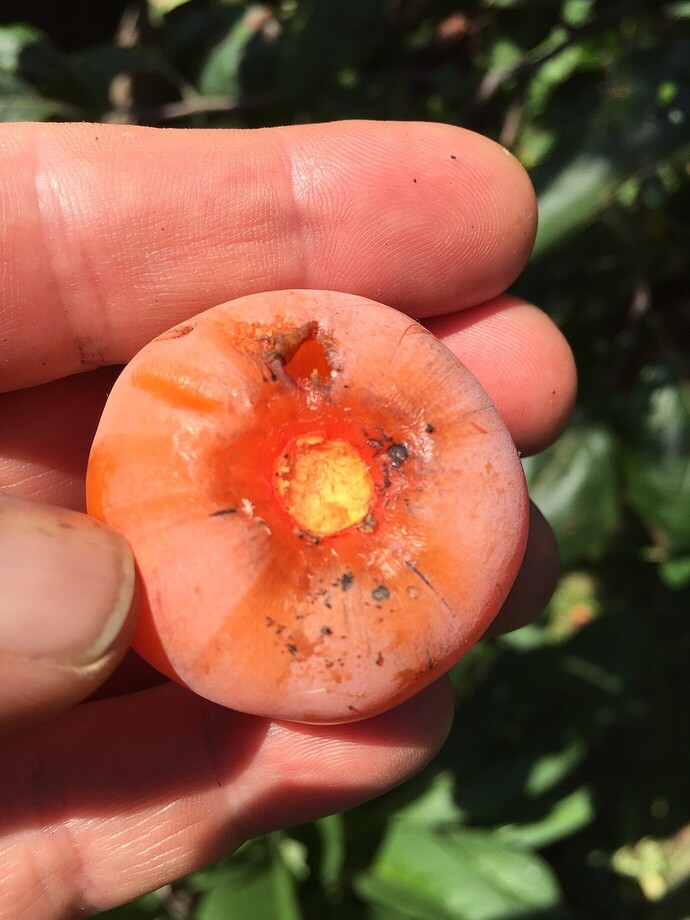 Don’t want to get this conversation to far away from the infamous Harrow sweet that’s what people will come to this thread to read about.

It is my understanding that harrow sweet bears fruit early.

Harrow Sweet has been my earliest fruit and it keeps producing each year. It might tend to go biennial if the fruit set is heavy but as of now I haven’t had an issue. My two Asian pears are also early but not as quick as Harrow Sweet. My not for everyone pear Orient is also an early to fruit pear. With my limited space I also struggle with which varieties I want to grow.

Pink Lady is a late ripening apple for my zone 6a. Fuji has both mid season and late season varieties depending on which one you grow.

Sorry, Clark, to stray away from pears. Just want @elivings1 to be aware.

As someone who sold a property with recently planted 20 asian and 20 euro pears at the point of production, I put in more pears, of which 25 are H. Sweet. Looking forward to shaping them up. One even had a flower on it. I cut it off.

I have Potomac, Harrow Sweet and Harrow Delight.

The Delight is ready a month before the other two.

The Sweet might be my favorite…but it’s very close, and all three have been bulletproof in a high disease pressure yard as no-spray trees.

Itmaybejj, I believe they are talking about it being precocious, not necessarily time of year it ripens.
I just topwork/grafted Harrow Sweet (along with a dozen or so other varieties) this weekend. And now we wait. Lol

They are referring to how fast harrow sweet produces pears in number of years. Harrow sweet produces very quickly 1-3 years is not unusual. Pears have a bad reputation that’s not really deserved now as taking a very long time to produce hence sayings like “pears for your heirs”. It’s been the fastest producer in my experience.

Definitely precocious. My Harrows bore so heavily so young they broke branches. Impressive. The Potomac took another three or four years after that.

Pears have a bad reputation that’s not really deserved now as taking a very long time to produce hence sayings like “pears for your heirs”. It’s been the fastest producer in my experience.

On semi to full size. Pears have been faster than apples for me.

What pear does Harrow Sweet’s taste most resemble? Bartlett?

Harrow sweet is not much like Bartlett but you taste a hint of bartlett in it as they are relatives.

A few that are going in the fridge. These didn’t size up much at all this year because of the drought we’ve had. 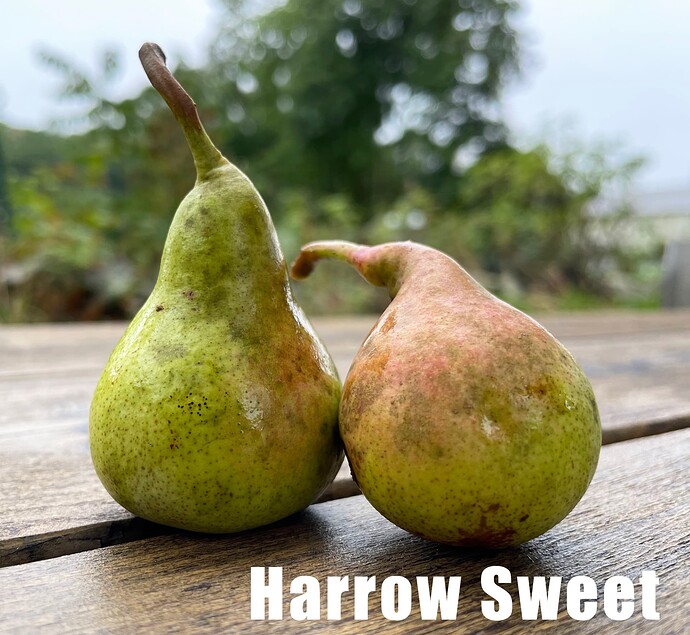 Picked yours already? I have not paid attention to it yet.

Clara Frijs is ripening. I think you should consider grafting CF.

Suppliers in the western U.S. don’t seem to stock Sweet, but a few stock Delight. Both appear to be available in the eastern U.S. during bareroot season.

My Harrow Delight tends to be a tad bigger than Harrow Sweet in my growing condition. Taste- wise, Harrow Sweet is a notch or two better.

Too bad, they don’t stock HS in the west. That’s a loss.

When does Delight ripen for you?

Harrow Sweet - this year in a couple of days. Previous year mid Sept.

Picked yours already? I have not paid attention to it yet.

They looked about right. And with everything ripening earlier here this year (or getting stolen by wildlife) I figured I’d give some a go.