I bought 4-in-1 Asian pear decade ago. Now it only one cultivar left. It should be either Hosui or chojuro. Since they both brown russet and ripe somewhat overlap so how to tell which one I have ?

Chojuro has a much smoother skin than Hosui. The skin sort of reminds of Korean Giant. Hosui has rough skin like sandpaper.

Well, I have hosui that got firelight couple of years ago and only left an inch or so that grows 3 fruits thisyear which I bagged. These bagged fruits’ skin is way smoother and don’t have sand paper feel when tested on my cheek.

I feel my Chojuro are more flattened than Hosui. I’ll take a picture of mine when I get a day off.

‘Sandpaper’ skin on Hosui is the easy differential for me.
Chojuro is a bit more flattened in outline, and develops a deeper ‘butterscotch’ golden brown color here.
Hosui is much juicier… I mean, you need a napkin to wipe your chin!.. but less flavorful than Chojuro, which has a rich butterscotch-like flavor, to match its skin color.

On the left is hosui. It is smaller due to grow only an inch or so branch. On the right is the pear I want it to be identified. From outside appearance I can’t tell them are different cultivar. But when I peel the skin off Hosui flesh is more juicy and tenders, less resistance and the other seems more dense, less juicy. But they grow on different trees so I am not sure these slightly differences are the clue to identify them apart 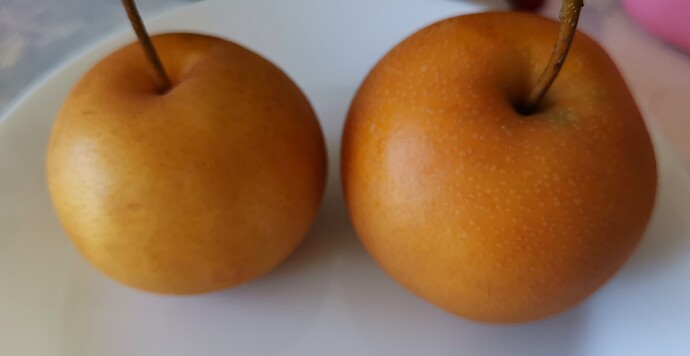 Here are some pictures comparing comparing the 2. 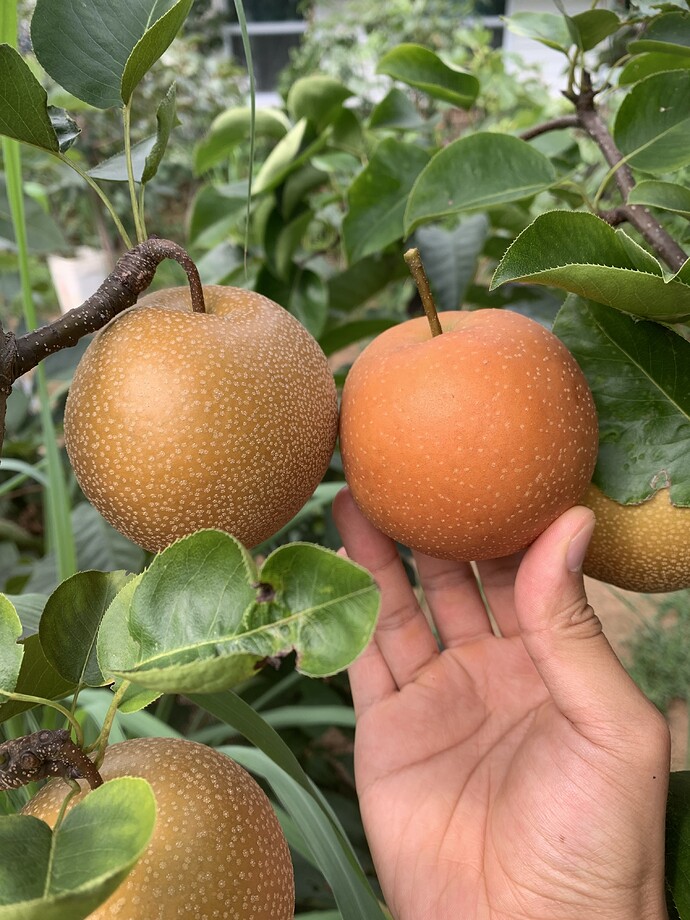 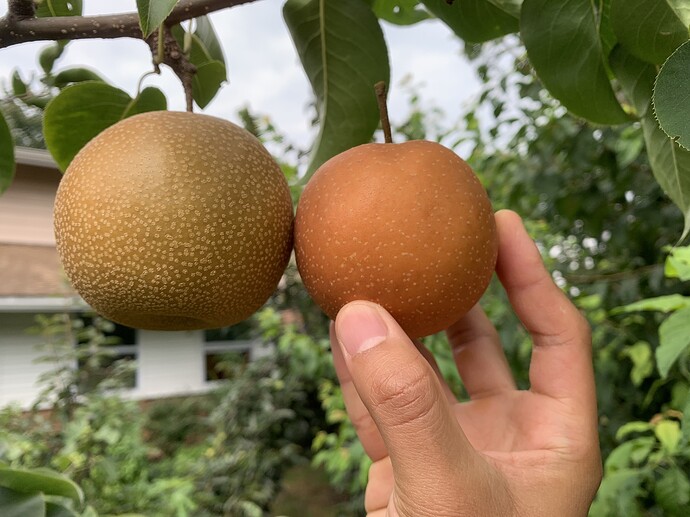 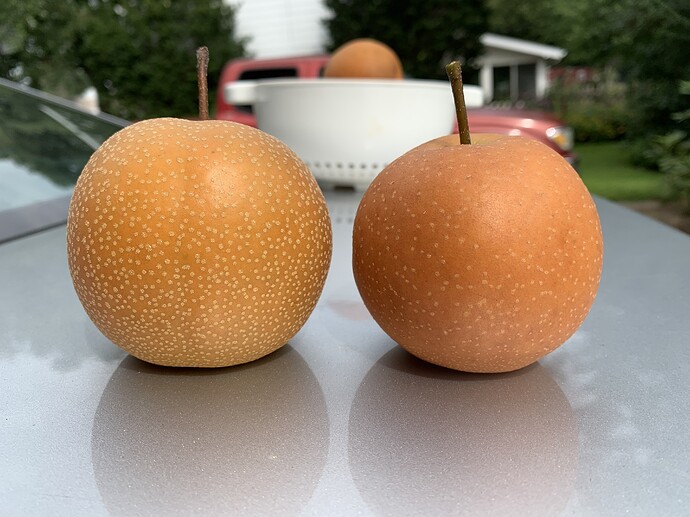 image4032×3024 2.85 MB
Hosui on the left and Chojuro on the right. You can see that Hosui has many more lenticels compared to Chojuro, and the skin is very rough to the touch. 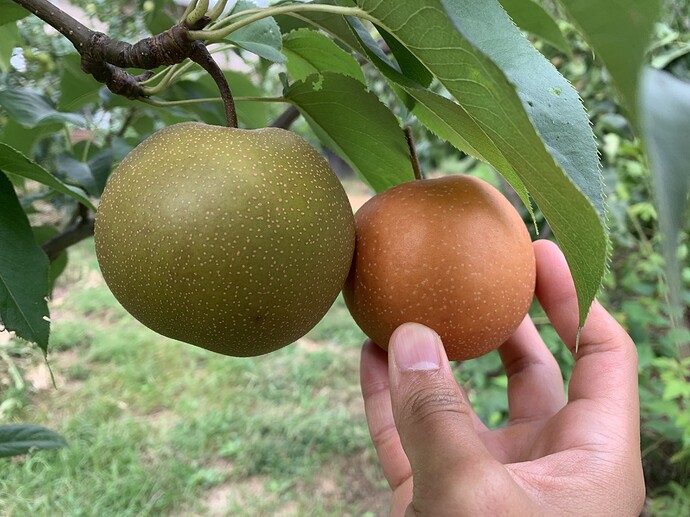 image4032×3024 2.91 MB
Korean Giant on the left and Chojuro on the right. Their skin is similar, but no surprise since Korean Giant is Chojuro’s daughter from my understanding. 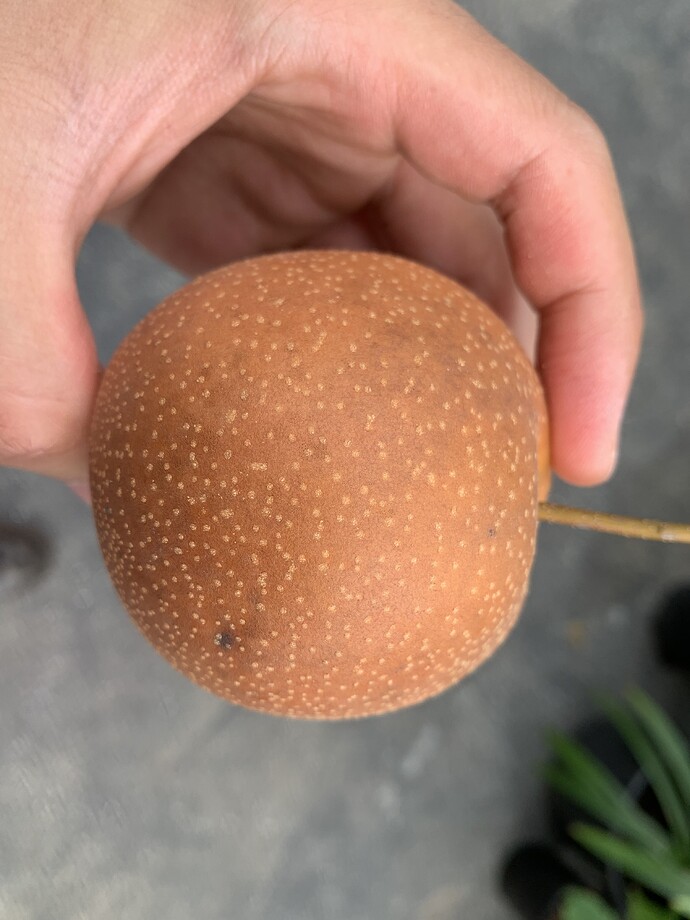 image3024×4032 1.68 MB
Chojuro can get very dark when ripe. They develop a rummy flavor at this point. The flavor is nice and more pronounced than most Hosui, but Chojuro has a “tough” texture. I much prefer Hosui over it due to this difference in texture. Although Korean Giant isn’t very juicy either, it isn’t tough like Chojuro so I give it a much higher rating too. This is all personal preference though.
5 Likes
Here comes the 2021 Apple and pear harvest!
IL847 August 27, 2021, 3:59pm #9

Andrew, thanks very much for taking the pictures for me. They are very helpful. After comparing with your third, I think mine is Chojuro that developed copper reddish color like the one on the right in your picture. It is ripe this time of the year in my backyard. I will save your third picture for reference.

I like Hosui better too. It is more juicy and tenders , although both are sweet. When Chojuro is in reddish copper hue stage , its flesh is not as juicy as I like it to be. Its texture is closer to European pear.