How to Handle Dormant Kiwi Cuttings

I just received 43 Kiwi Cuttings from Davis. Several arguta and chinensis varieties. I was thinking of scoring the lower bark, adding hormone and then planting them, but I wanted to consult y’all in case there’s a better way, or a particular required method.

The package said to keep the live plant material refrigerated, so that’s what I’ve done since they arrived yesterday.

Chinensis has been tough to root. They take quite well to grafting. Atleast in my experience.

I totally agree with ramv. Arguta cuttings are fairly easy and will often root well just stuck in water, while dormant A. chinensis cuttings are nearly impossible. I have tried lots of different ways to root chinensis and have never fully succeeded with dormant material. I did get some roots by burying chinensis cuttings upside down in sand last year, which kept the tops cool and the bottoms warm near the top for several months, but none survived when I tried to transplant and harden them off.

If you just stick in soil, then they will need to be covered with shade cloth and kept slightly moist. The chinensis cuttings may require several months, and will still probably fail. Grafting is the only reliable way to propagate them, other than layering or using green shoots under mist.

Throwing my idea out there to use a cheap essential oil diffuser for “misting”. I haven’t done it but got some good feedback from the suggestion on a blueberry thread.

Is misting measurably different from rooting in water?

Should I set aside a couple of the argutas and attempt to graft them? Are they graft compatible?

I don’t have much experience with grafting. I’ve only tried it once, with dormant mulberry cuttings on an actively growing tree, and they didn’t take.

Caesar, I bought a book on plant propagation but haven’t delved into it yet. I do know from the blueberry thread that it’s basically the only way to get them to root and they are supposed to be very challenging. I’d imagine the same applies here if it is a challenge.

@Caesar What do you have as a rootstock? Arguta can be grafted on chinensis/deliciosa, but grafts will probably not last long term. They should last at least a year or two, which is plenty of time to get semi-green shoots rooted.

Mulberry grafting has been tricky for me as well. But kiwis are easy. Give it a try.

How many cuttings can an oil diffuser take? About half of them are chinensis. And how long would they store in the fridge while I get the diffuser?

Either that, or root the argutas first and then graft the chinensis. How long do they take to wake up and root? And how long (and in what way) can I keep viable cuttings in the fridge?

It’s quite hot here, so I wouldn’t expect them to remain dormant for long once planted.

That makes me feel better regarding my loss and the current predicament. Thank you! Let’s see how this goes.

I am not sure. I have not tried it before. Another option could be a humidifier, they are also affordable and most have variable output.

I remember reading about grafting grapes where both rootstock and scion were rootless cuttings, and the assembled graft is put in a box with peat to root and knit together. I wonder if something like that would work here?

I was rooting chinensis/deliciosa cuttings along with figs and failed miserably. I used potting mix with perlite, rooting hormone and parafilm for the exposed part above soil (no misting, heating pads, just plain and simple). The cuttings looked like they are fine, started to grow but the green growth eventually withered. When I checked the cuttings, they callused nicely, even created the bumps/primordia but no signs of roots. I killed about 15 cuttings this way. Then one day I just took them outside and left them there, they rooted! Year after I repeated the same, this time I skipped the indoor rooting and waited for the temperature to warm up outside, I had about 50% or more success rate (it depends on variety, male zespri had 100% success rate while female about 20%, others were around 70%).
So yeah I am not an expert in kiwi rooting, did maybe 15 plants all together but did not find it particularly difficult, outdoor rooting with the temperature swings worked way better than controlled temperature indoors. Good luck

That’s not a bad idea. Nurse grafts are sometimes used with hard to root grapes. I’ve never heard of anyone trying it with kiwis.

Use a whip and tongue graft and wrap the union with parafilm, after applying some rooting hormone. Make wounds on the arguta piece (2 to 3 inches long, with at least one bud), and apply hormone. Bury it in the ground with only the top bud sticking out, and try to get them fairly deep (long scions).

If the arguta piece roots, it will probably send up suckers, so keep those in check.

Conventional wisdom, 20 yrs ago, was that dormant kiwi cuttings did not root(or, at least not at percentages high enough to bother with)…you’d have to graft onto rootstock, then take greenwood cuttings during the growing season, and those would root quite readily.

I have some plastic shoeboxes, but for the moment no peat. Would plain soil work?

That sounds like an interesting breakthrough. I’ve nothing but heat here, perhaps I might see results bringing them out by day and putting them in the fridge by night.

The scions are quite long indeed. Should I sprout the argutas and then graft, or graft while dormant? Also, I don’t have parafilm, but I bought breathable medical tape for an upcoming isopod culture. Would that work?

Argutas were new back then, right? They seem to have more success as dormant cuttings, so the greenwood strategy is my plan for the chinensis, if I can get some grafts to take.

I don’t know! All I know is what was mentioned in the post linked below and the next two responses. I suppose you could use any medium that the hardy kiwis will successfully root in.

That’s right. I’ve watched that whole process on youtube. I was amazed at the double checking and triple checking of their work in this video:

I would second the use of a hot callus apparatus. I got great results in persimmon AND Feijoa which it wasn’t explicitly designed for.

Are hot temperatures necessary? I live in Puerto Rico, I’d be surprised if my yard even gets below 60 at night.

So far… I’m tempted to throw all the cuttings in a shoebox and cover them with dirt. Leave it on the table by day, stick it in the fridge by night. At the first sign of green, take greenwood cuttings. That said, I don’t wanna set myself up for failure. I’m a bit intimidated by the idea of grafting, simply ‘cause I’m inexperienced.

Nah, you are in a perfect climate for plant propagation.

But rooting Chinensis is tricky.

Also I wonder if you have enough chill hours to get any fruit from either variety.

I may be late to the party and I apologize to the poster who’s ready to get their show on the road, but I’ll show you what I do. Here I just rooted Arborvitaes, recently. When applicable I find the node/branch that is in the middle of the wood that transitions from semi-hardwood (last years growth) and the hardwood (two years ago growth). I’ll remove that branch or bud or buds at that (scar.) A scar is the impression in the wood where the buds grow from. So…

you want to have that scar between the semi-hardwood and the hardwood if at all possible. From there you have to root into something that won’t have the soil in standing water whether you use custom boxes you build yourself for pennies on the dollar, or whether you are rooting in pots. I use pots that are 5" tall and above. Typically anymore I’ve returned to the hundreds and hundreds of Anderson Tree Band pots I’ve had on hand for decades. The pictures will show the process.

Doesn’t matter if an arborvitae or a kiwi or a clematis or fig or anything. You’ll see the mixing proportions for ‘Dip n’ Grow’ rooting hormone on my plastic beaker. That is what determines what kind of wood you are going to root whether readily growing summer green wood or later in the summer semi-hardwood or completely hardwood.

Scrape the cutting(s) on opposite sides of (a) bud scar. The rest you’ll see in pictures. 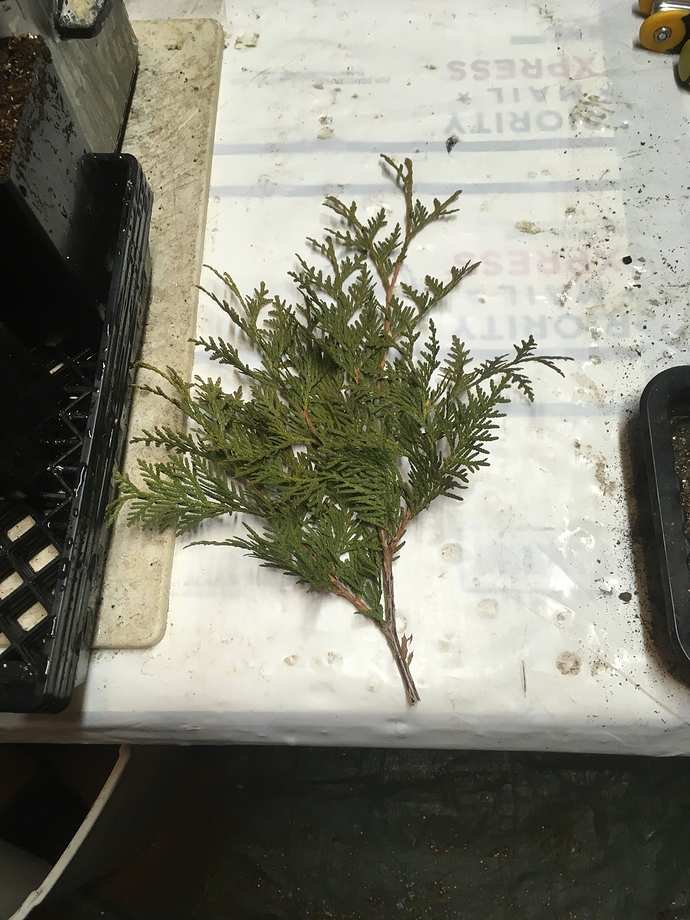 If you’re rooting deciduous material that’s leafy, you need to cut the leaves back the same. Say you’re summer rooting under shade cloth & mist, or, using an indoor system the same as mine. Here’s these arborvitaes: 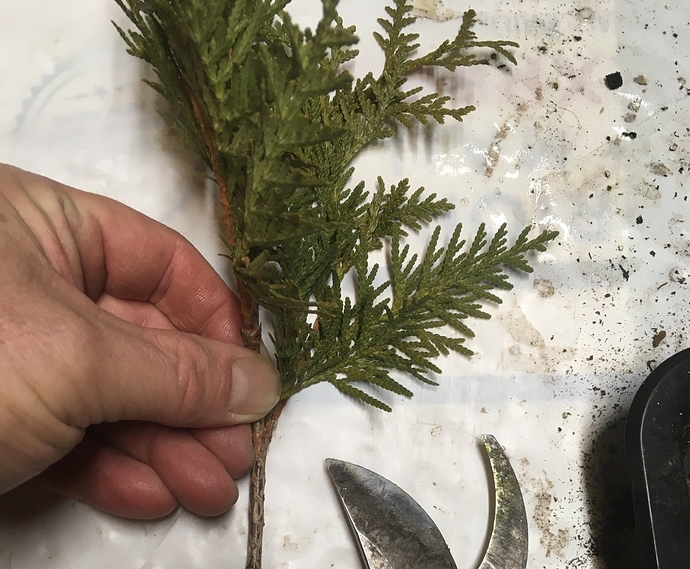 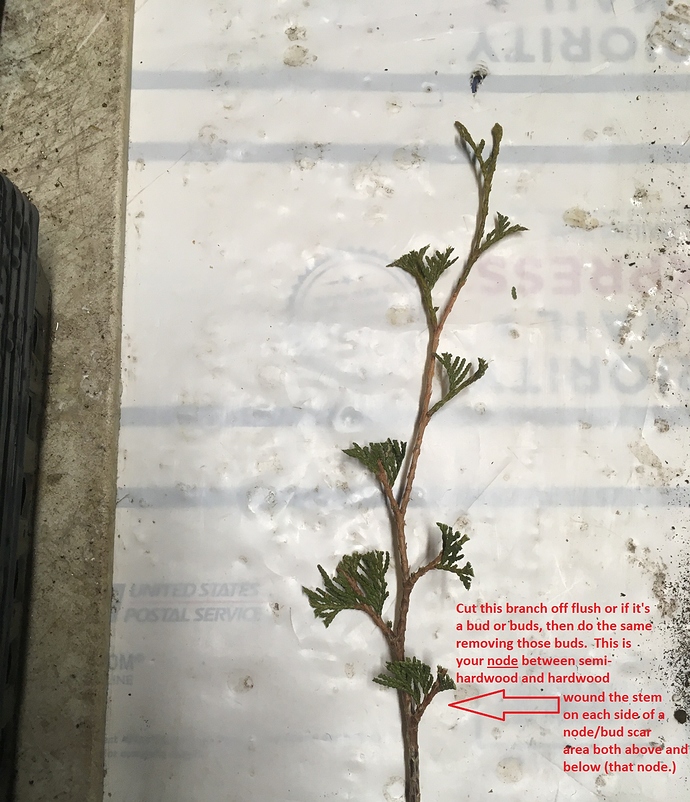 one side wounded. You scrape it with a knife back and forth using a fast motion. 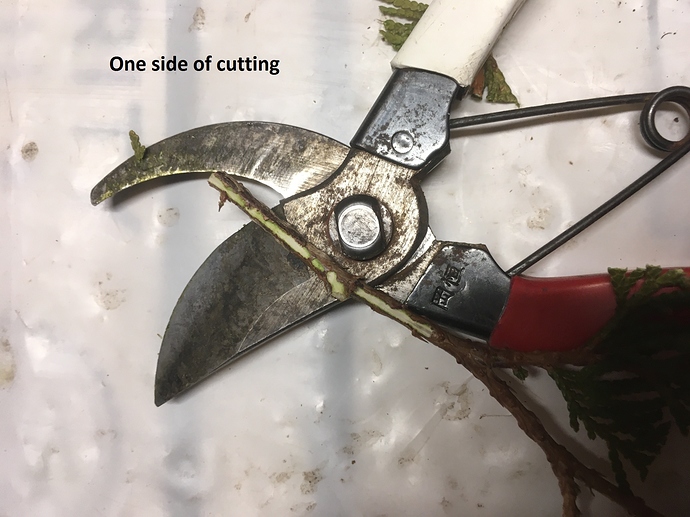 flipped stick over and wounded other side: 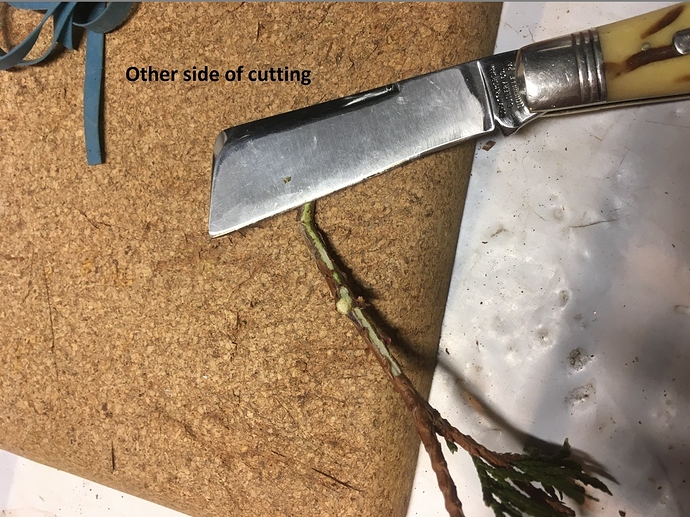 time to dip and then insert into media whether flats or tall enough containers. A lot of the time we water from below when rooting because the soil(s) aren’t being disturbed and that’s what creates rot and kills cuttings more quickly than you can say “Mother Mary.” (a stem that isn’t high enough above any standing water as well as media that’s excessively wet) rotting either the stem trying to produce callous and roots or the roots that were produced being killed from rot . . . 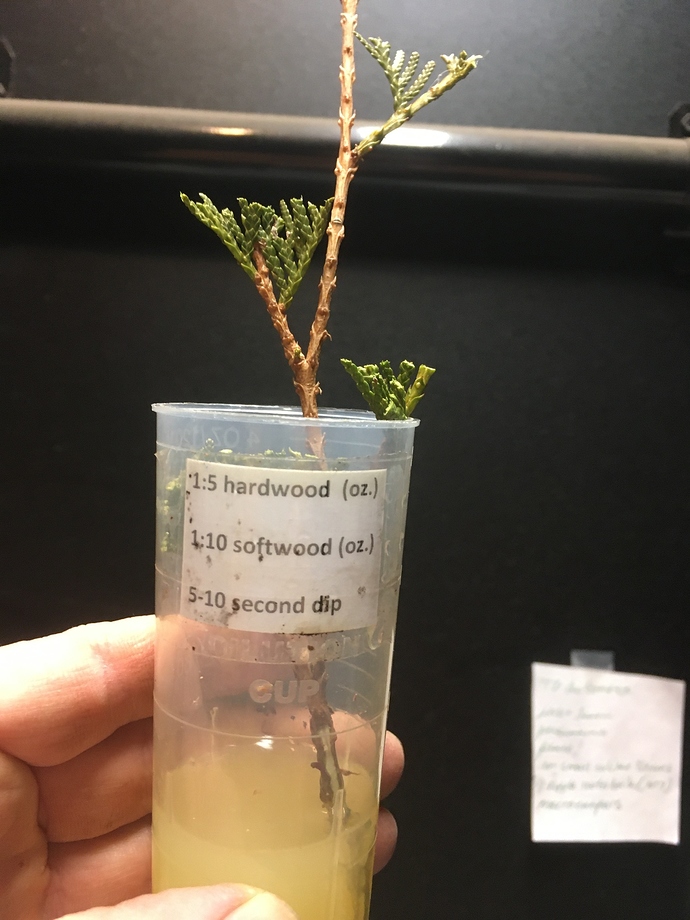 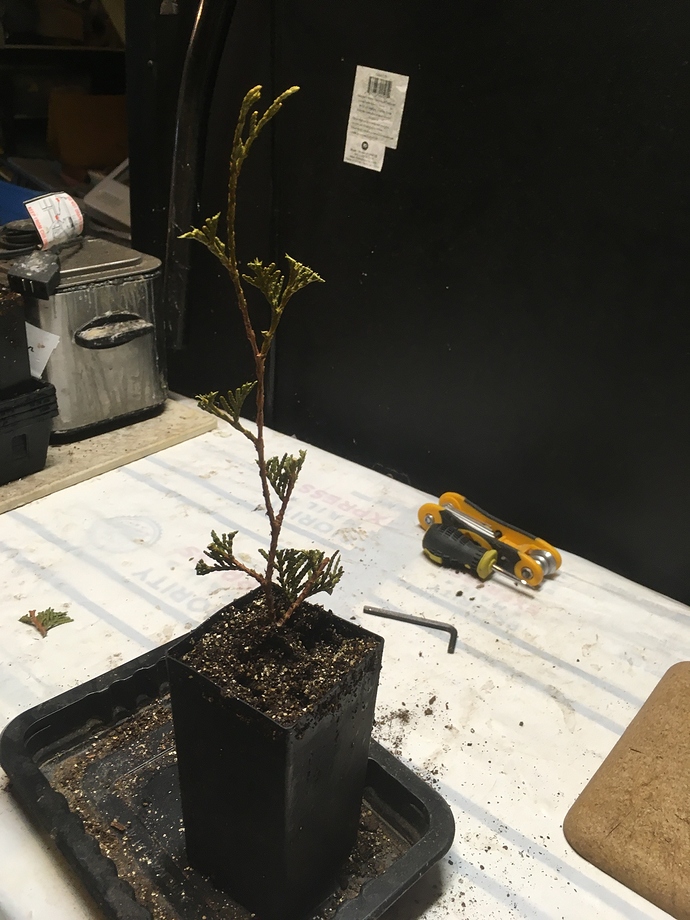 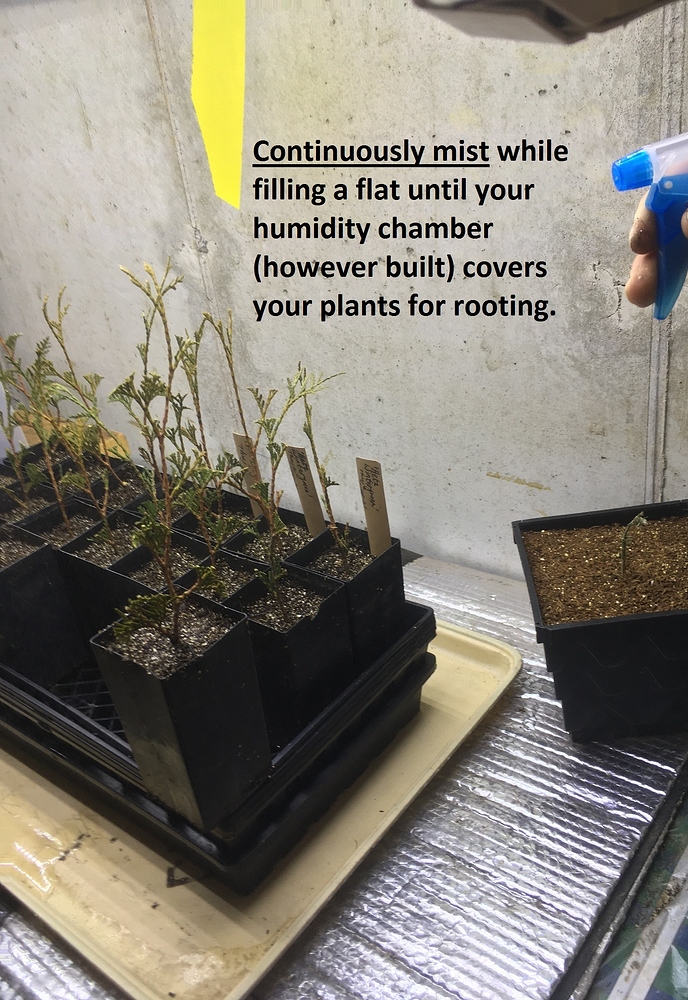 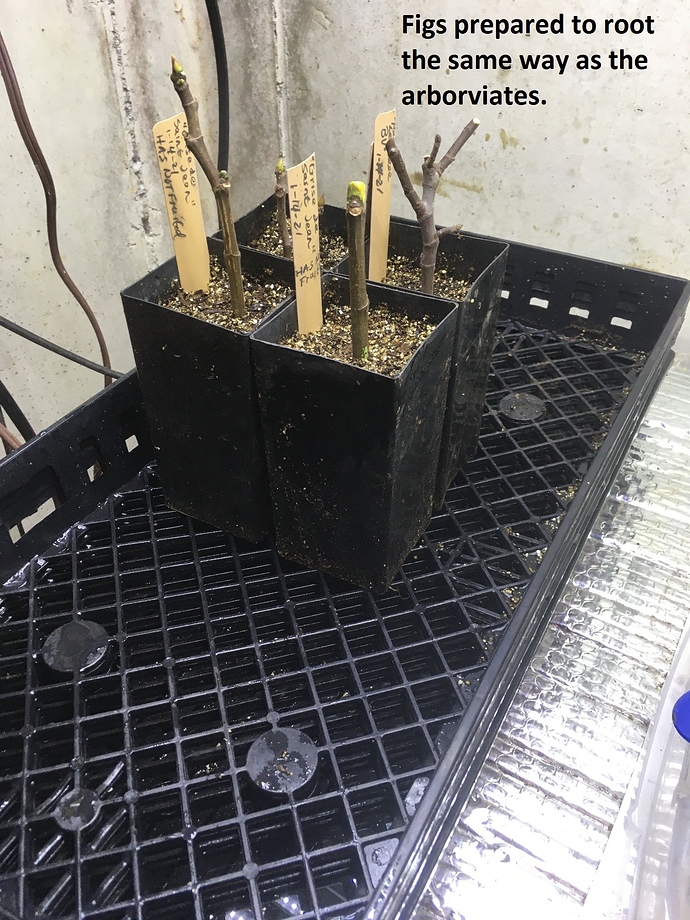 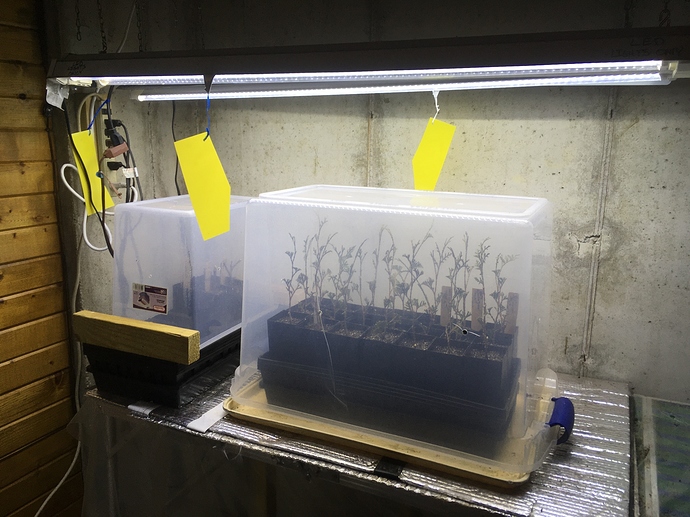 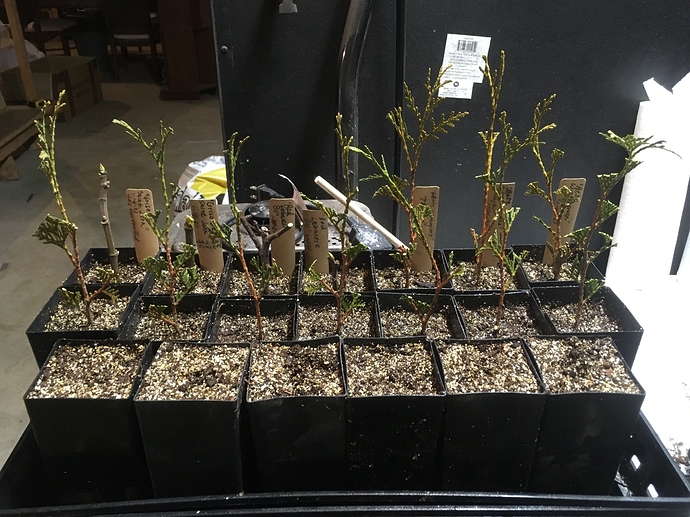 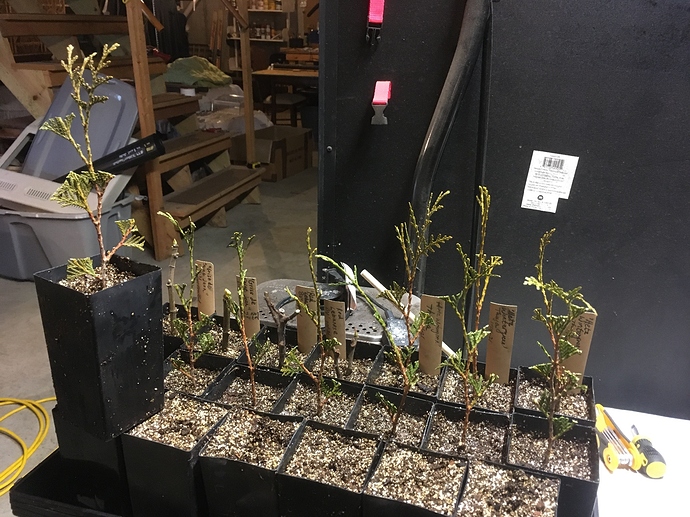 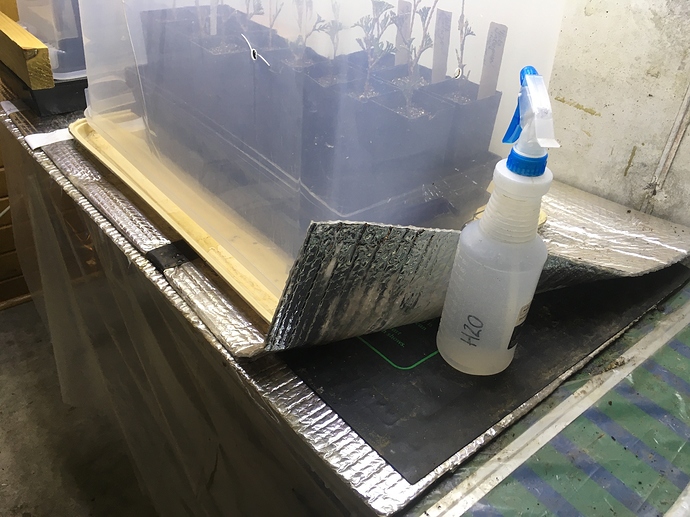 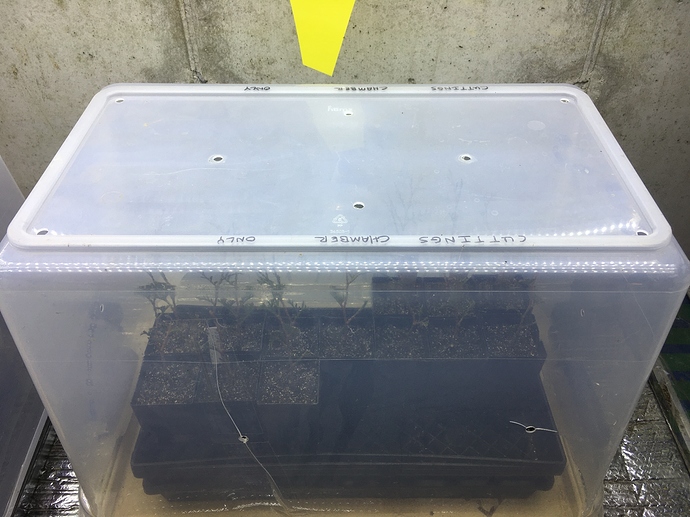 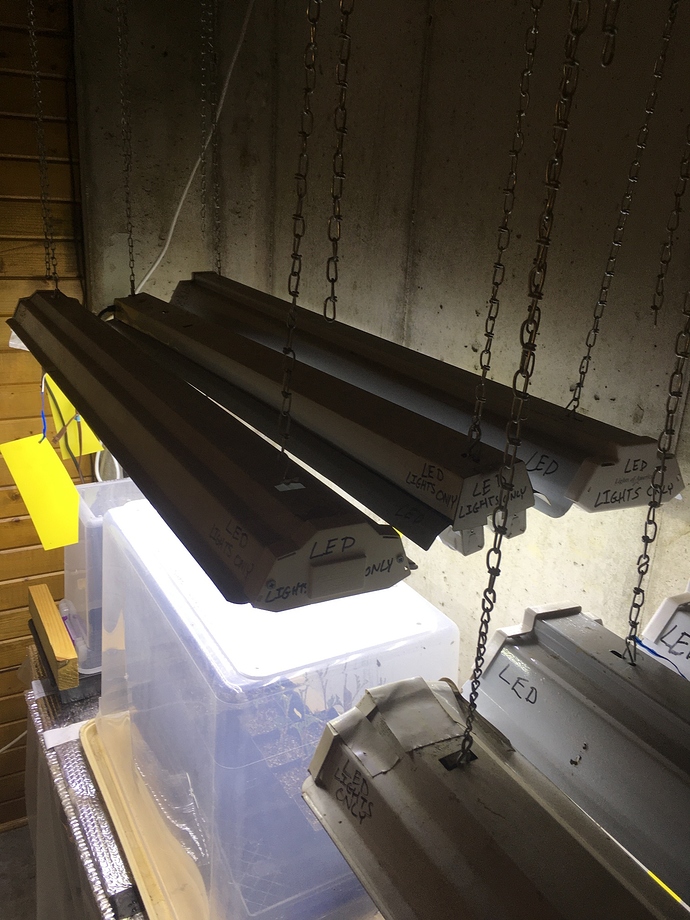 Best regards. @jcguarneri I would’ve had this posted earlier but I got to doing stuff. I already had the pictures. So hope this helps anyone. Dax