What do you know of the parentage of these?

Hang on to the tree for me so far.

Hi Tony, do your JT-02 fruit ever have seeds? I’m interested in growing any seeds out for fun.

No seeds so far.

Glad to heard about Starks and your feedback of costumer service about the replacement of your damaged persimmon.

I didn’t have a good experience with edible Lanscaping after the incident I called and emailed to report the incident and the damage that was done to the tree, fourth months had passed and still haven’t get any email in response to the damage.

I planted the broken tree hoping for the best but I unfortunately the damage was mayor than I thought and the grafted part didn’t make it, whoever the rootball start just sending some green growth.

This year my rosseyanka is packed with fruits. Last year had first fruits, only about 4-5. But this year I had to support the main trunk cause it started to lean to one side because of wind and weight of the fruit. Also had to tie some branches to the main trunk , I was afraid that they can break.
Here some photos from few weeks ago and now. I didn’t know if they will still hang on the tree. Older photos 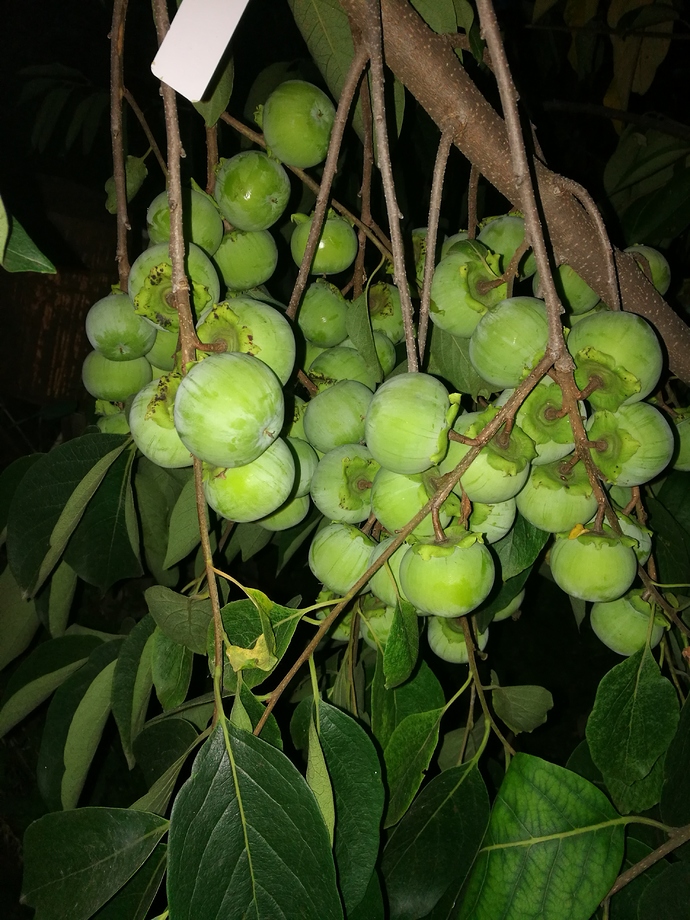 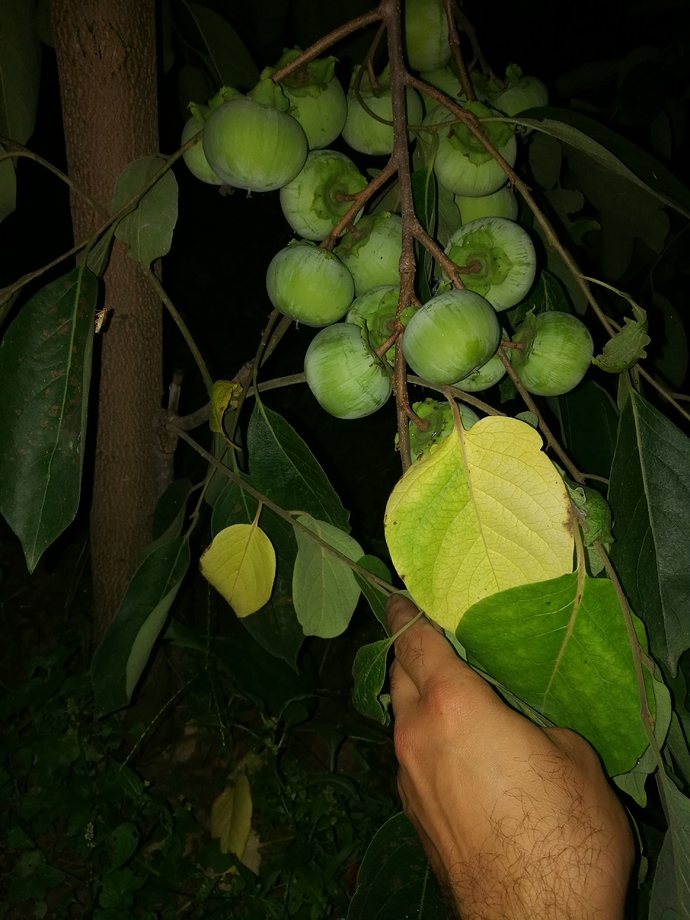 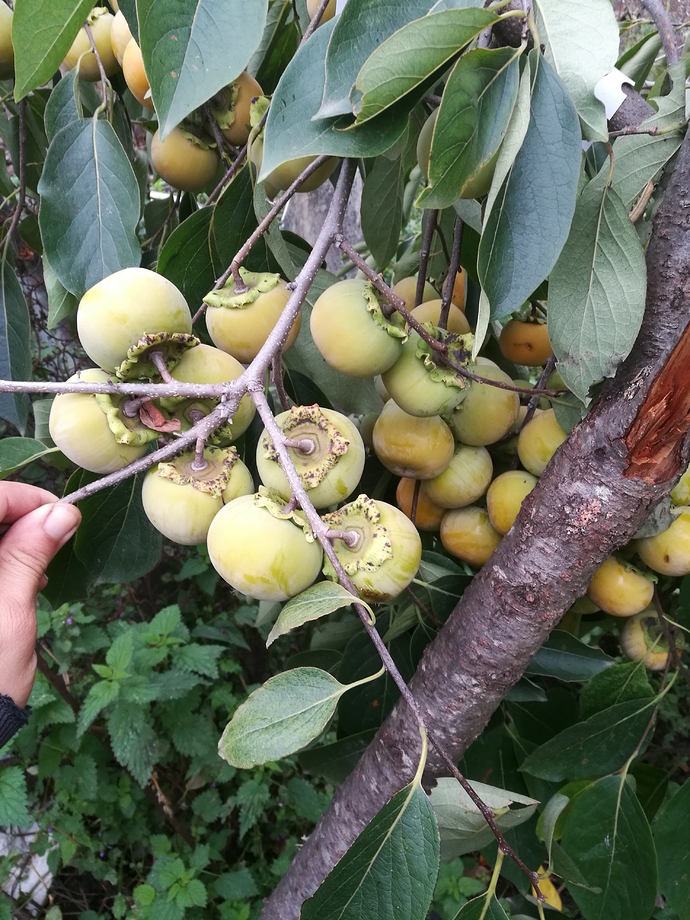 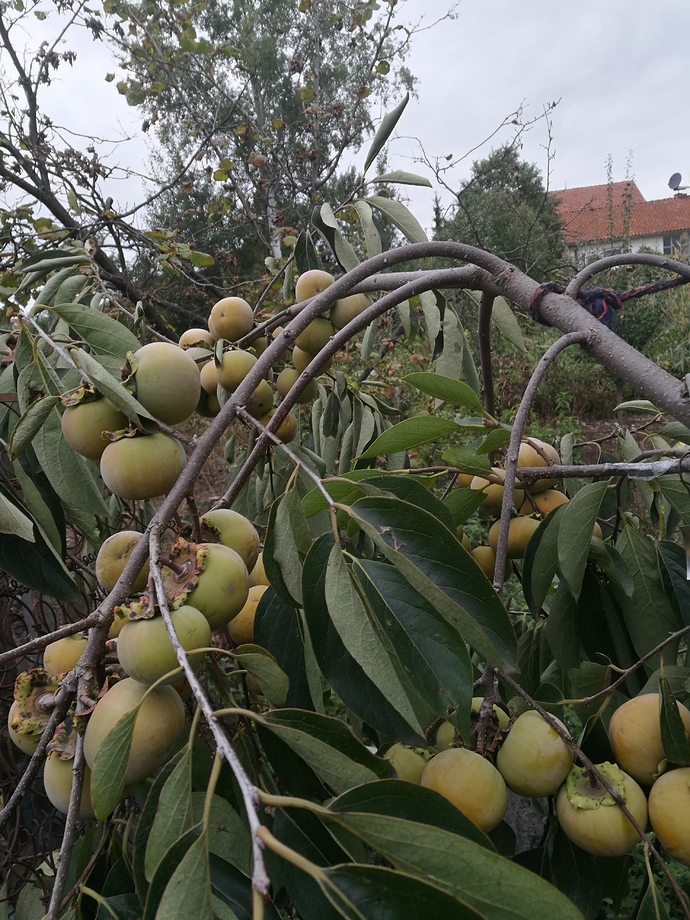 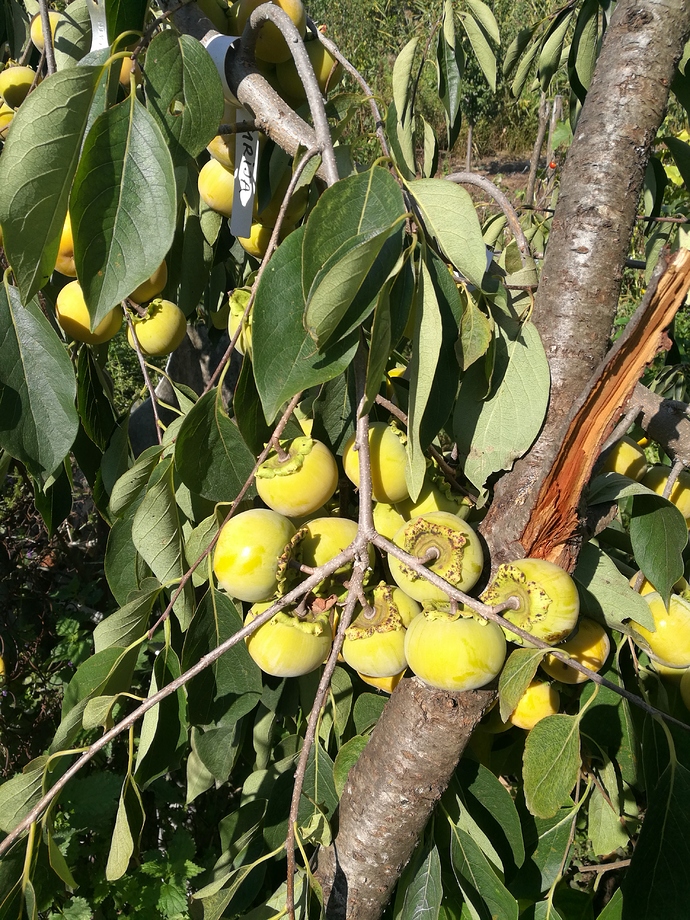 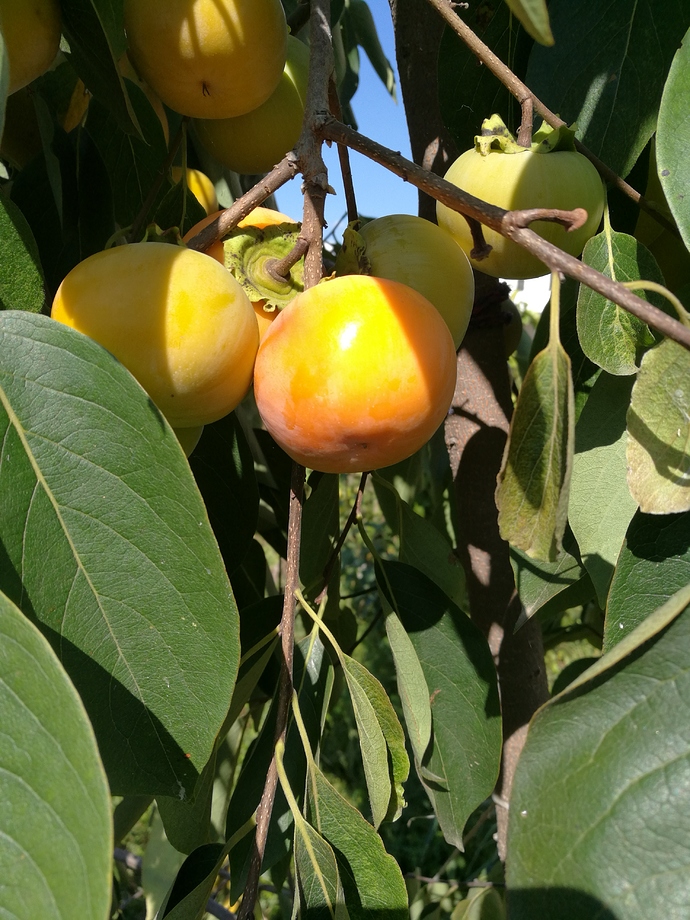 IMG_20201002_114204.jpg2976×3968 3.32 MB
Yesterday I found one fruit which was soft and I eat it, it was excellent.
I will definitely plant more trees. My plan is to have at least 15 persimmons. Mostly hybrids, but will keep some of virginianas as well. For now I have rosseyanka, nikitas gift and jt-02 aka mikkusu, next year I will graft kasandra and mriya. Also have one hira-tanenashi d.kaki, grafted this year and will see how will survive winter. Besides them have d.virginiana barbra’s blush and lehman’s delight. This year only LD have few fruits, still green. BB dropped both leaves and fruit already.
Thinking to try some non astringent variety to see if can be grown here. I’m open for suggestions for any more good varieties

Nice production. How old is your tree? And how tall? Diameter of the trunk? Congrats.

Amazing productivity… Do you think leaving that much fruit on the tree will not affect flavor? If this was a peach, the flavor and fruit size would have definitely gone down… 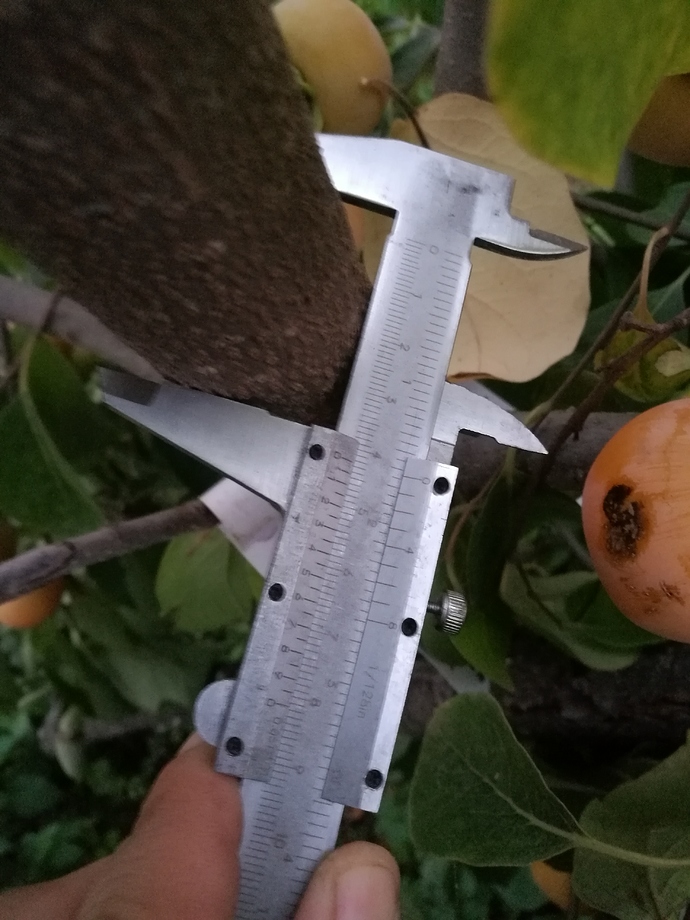 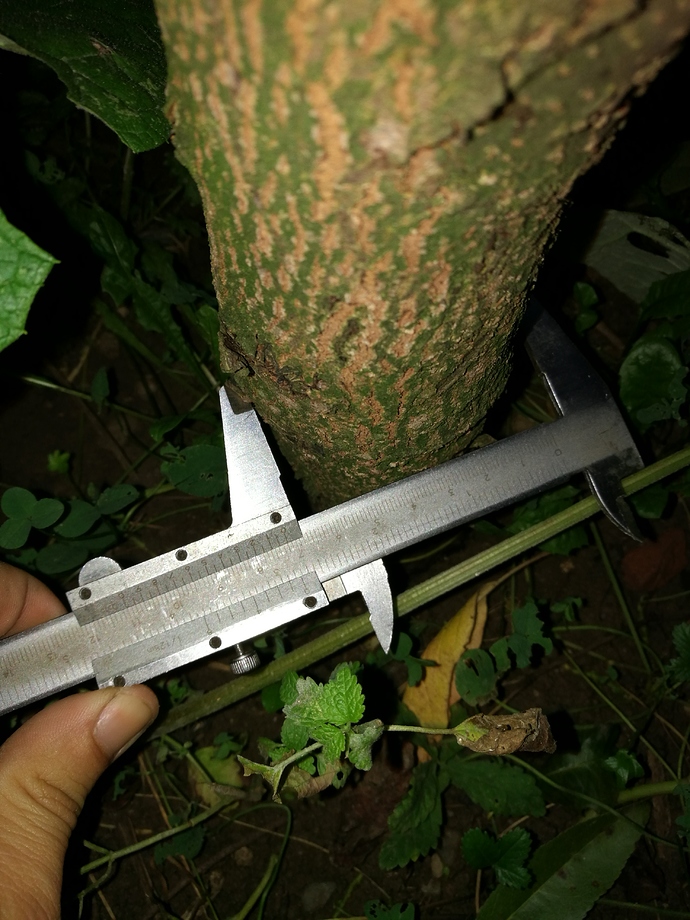 Tonight we had rainstorm,strong wind and surprisingly none of the fruit fell off. I dont know how productivity can affect the flavor. Don’t know people who grows persimmons here and their experiences. Soon I they will ripe and I will try them. But that one fruit was excellent, I expect that all will be like that one. This persimmon, like all of the plants in my yard, have plenty of water and some fertilizer. I have well and every few days I water them over the summer months.
Here are some fruit with vernier caliper for scaling. 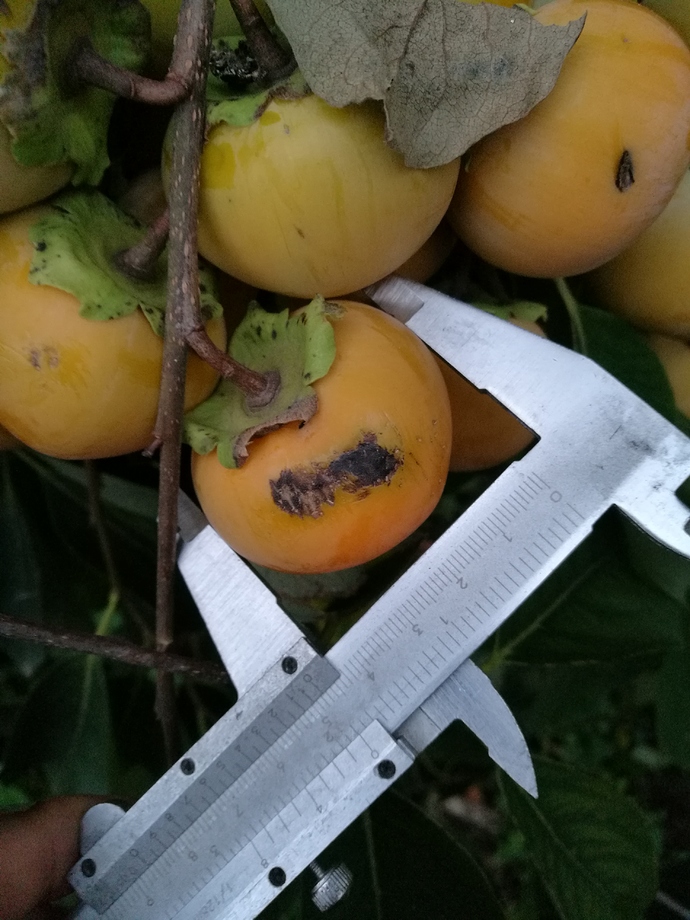 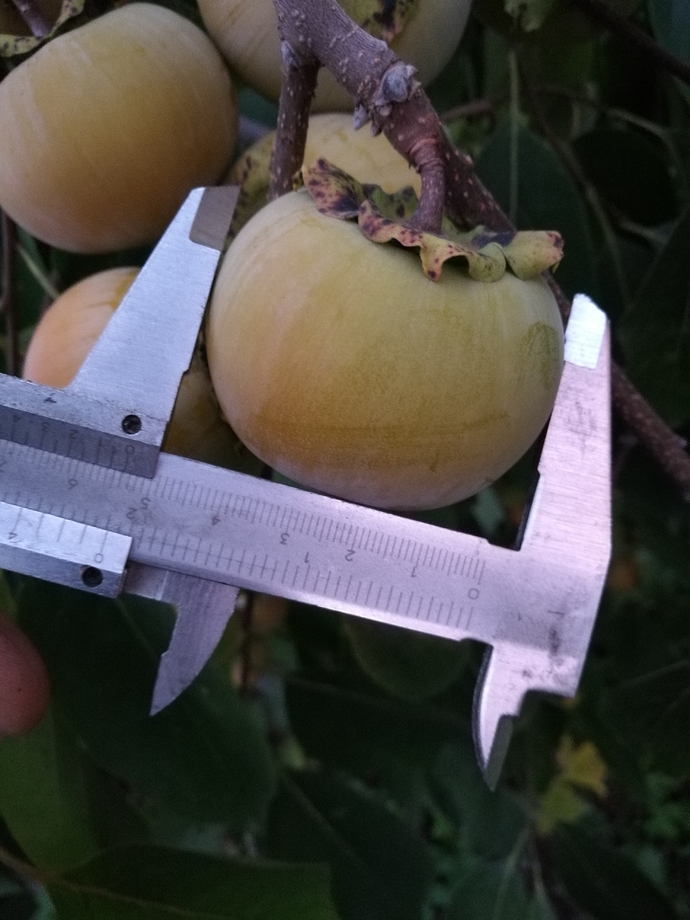 I was in my little nursery today, checking on things.
The leafs are turning Color and falling.
I was surprised to find a big fruit on a Nikitas gift.
I was only ~ 3ft. Tall with one big fruit.
Previously hidden by leafs.
I gently carried it to the house for a photo.
Well the fruit fell off with a little splat .
Perfectly ripe.
I promptly ate it ! ! So no pictures.
Very good
. That was my first one here.
So this was on a 2yr old tree 3 ft tall in a 4x14 in. Treepot.
None of the ones I have planted out inground have fruit yet , but this one did.
Oh , and it had 3 seeds in it , I will be growing those out ,to see what they become , a hybrid by definition I assume ?

I do not care of the flavor for eating out of hand!
Do you know of the tree this year would love some seeds.
Or scion (would maybe be good for a Landscape tree Black leafless fruits hanging)

I too Also Would like to breed Diospyros texana (chapote)
and D. Californica and Diospyros nigra & D. Lotus

I know the flavors May not be as sweet, but I like bitter fruits out of hand as well
I also Like vinting wine so bad tasting fruits make good wine
(have made sweet Persimmons wine)

About breeding though I know we have 90 chromosones KY has 60, and they will not breed but Far in Florida have 30 so maybe a linking type between the two
But 2 or 3 (or more) Japanese Species also Has 120 Chromosomes (see link)
(I do have all the Diospyros Virginia Var. species names in North America , but just posting quickly
Contact me for more of those links, and info may take a week for me to respond.)

Here is a Link I posted a while back that explains that much
Sorry This seems off the topic, but is in a way since it is a Hybrid topic.
(those other links are in my email , but here is something )

Here is a link 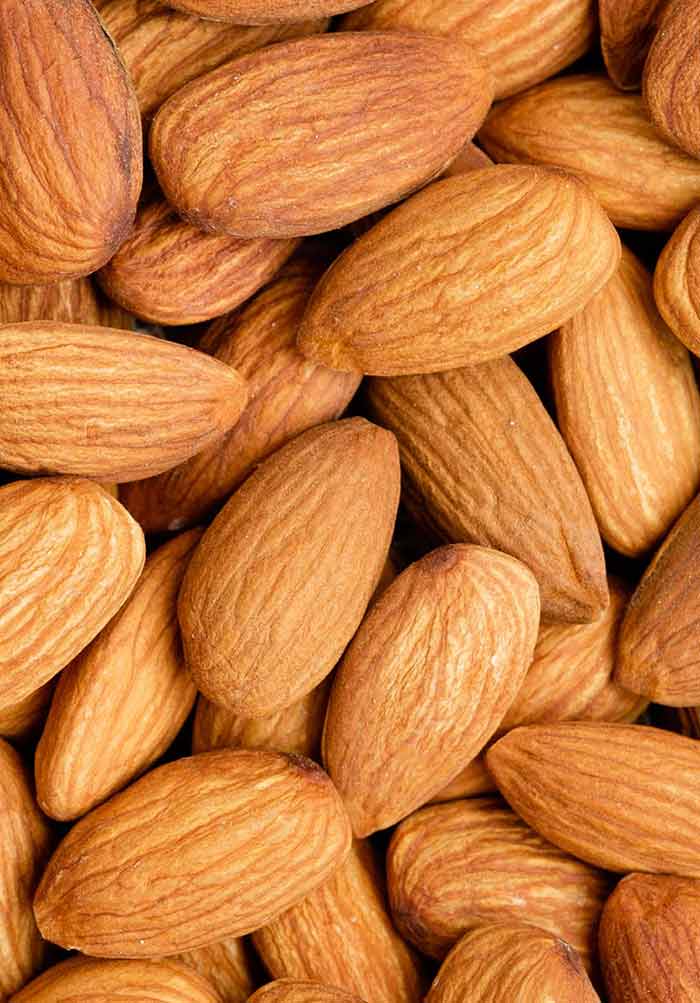 The genus Diospyros, which is distributed in tropical and subtropical regions of the world, contains hundreds of plant species. However, four species of them have commercial importance. D. kaki Thunb. is the most widely cultivated species of the...

Edit should have quoted

Did you mean Hachiya or Black Sapote D. kaki
or Diospyros Nigra Black Sapote (a subtle flavor species usually made into smoothies with whipped cream, and other stuff to bring the flavor out.)

Not sure where my links are but USDA Has this

these are variations of the species as I always thought they where
of Diospyros virginiana, but I hope I am not incorrect, and they are just Synonoms
What I have found is little on it , but Know different Genus have Variations
(Like the wild grape vitis riparia Var. syrticola for example in Michigan sand dunes)
but all interesting to look up to see more about different variations in North America
(note it’s been a year since I read about this so maybe lost on another PC I just used for reading)

For Me I think it would be nice mixing up the genetics maybe Even a Florida one,
with a early Northern one, who knows maybe they could get 2 crops A year in Florida after back crossing.

Tanenashi and Hachaya are nice big asians that do well on the gulf coast. They also will get a very rich flavor if you let them get fully ripe in the fridge. If you eat them as soon as they soften, they are not near as rich as if you refridgerate them soft an extra week.

Edit Above Paul In Kansas Mentioned ripening Persimmons in the fridge for a extra week.

I had some rock hard wild Simmons, pulled off when the others were ripening
Kept in a sealed ziplock bag in fridge for a Number of months (2 or 3) they were ripe , and very sweet. (got those by the forest park by Jerry Lehmans by lake)

Looks great! I appreciate using the calipers so we know exactly what size they are.

I decided to pick all the fruits from roseyanka. 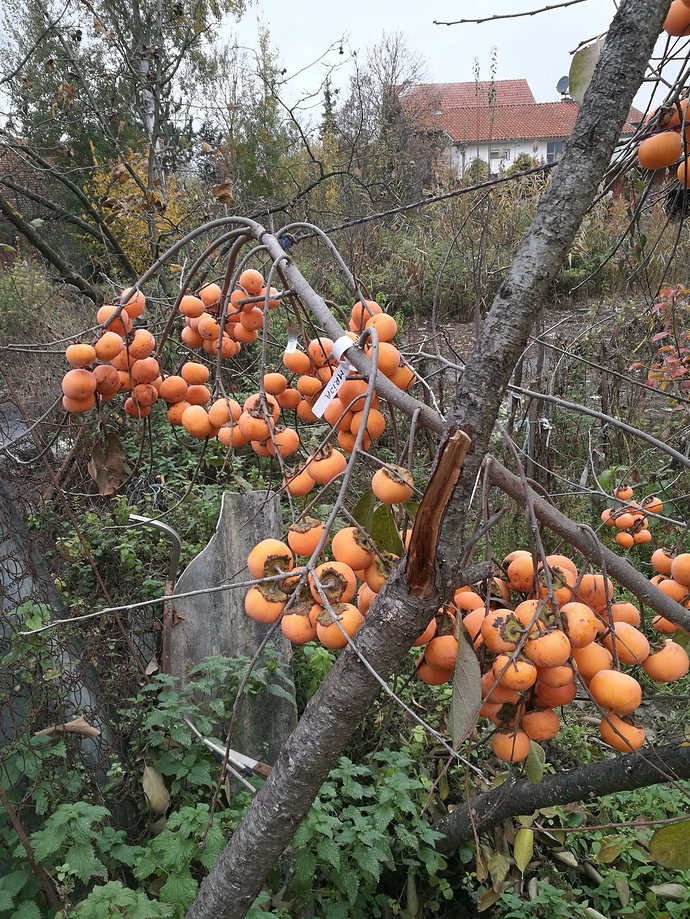 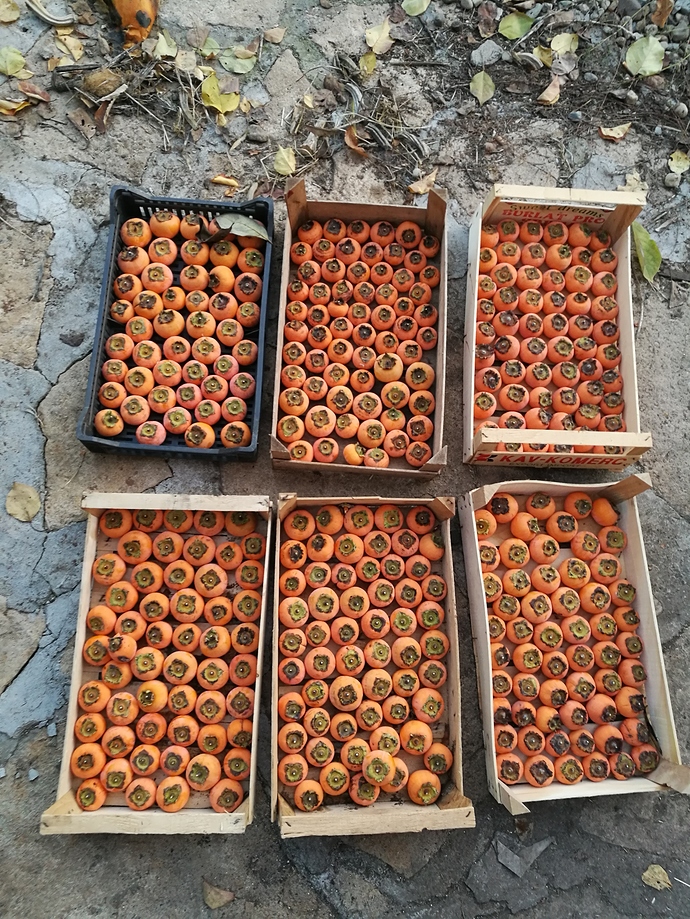 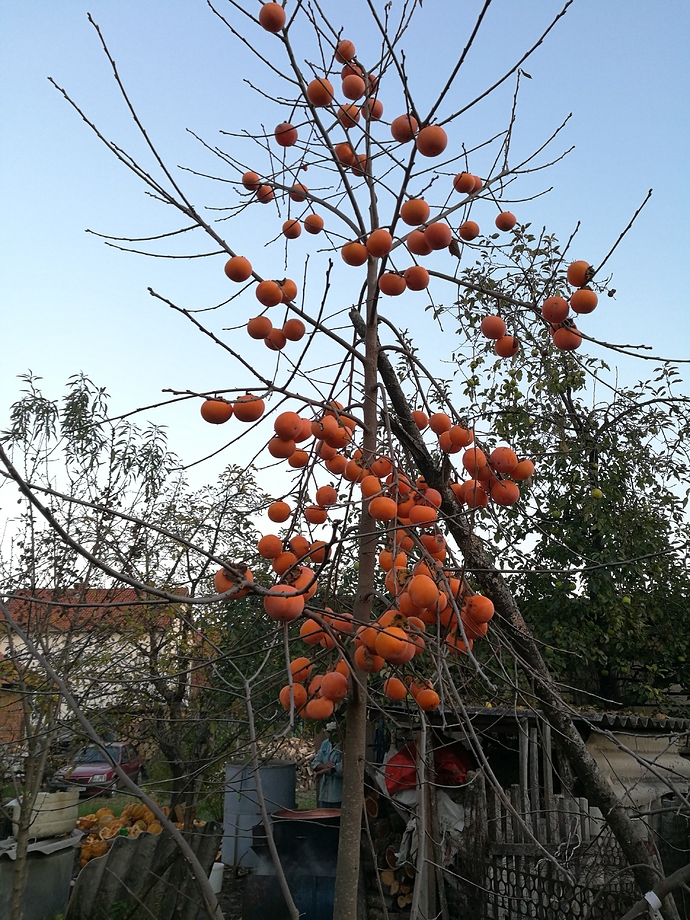 IMG_20201112_155808.jpg2976×3968 4.45 MB
My guess is that tree produced about 40kg of fruits. We ate some, lots of them I gave to people to try. Many are curios to taste something new. And still have some, waiting them to become soft. Don’t know the weight of fruits, I dont have precise scale. Will try to go to my sister and photograph few on digital scale. There is significant difference between them. Branches with tons of fruits gave smaller ones, those ones which hadn’t so many gave bigger fruits.
In total I’m overjoyed with it.
murky 2020-11-19 20:44:58 UTC #438

Are they all seedless?

Very cool, thanks for sharing, quite impressive!